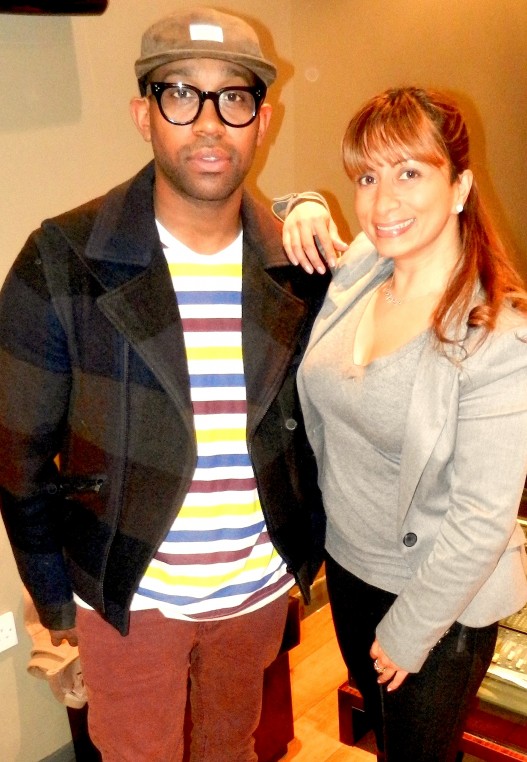 JASMINE WITH PJ MORTON!
Happy Valentines Day readers! I love you! Do you still get excited about Valentines Day or are you an older cynical reader that is more turned on by other things in life?
You know you’re getting old when you get excited about renovating your bathroom! Yes I was all-excitable when the lady from the bathroom company came over to measure up my lav for a new suite. I primed the house as if my mother-in-law were popping round LOL!

As you get older many of us hard beaten entertainment industry types also tend to reach out to pro-social causes to balance out our previously over the top, opulent, rock & roll lives. Honestly, when I say OTT I’m not exaggerating. My career has seen me swanning off to NYC to conduct a 5 minute interview with Madonna, spending a week instead of 2 days at Disneyland Florida cos Justin Timberlake was too upset to do press during his break up with Britney which happened on the 1st day I arrived so I was asked if I minded staying a few more days until he was up for it with his band N-Sync, taking a private jet from Sweden to Paris with Snoop and Puffy just so they could have some jet TV action in their tour diary, flying to Cuba for a week with Jamelia to film her Making of the Video-2 days filming, 4 days ‘’preparing’’, spending a long weekend in St Tropez on what Puffy called his boat (but was a 100 foot yacht) to talk about his latest fragrance, going to Jamaica to watch Beyonce perform at a festival, 15 minutes filming 3 days preparing, and so on. When you call that work and acknowledge the cost, air miles and reason for it all it eventually makes you feel guilty. Guilty of killing the environment with air pollution, guilty that you’re being paid to speak to superstars whilst others wake daily dreading their jobs. It all adds up to a lot of guilt. So when you get a chance to give back post party lifestyle you grab it with both hands and feet.
Much of the work I do now therefore combines broadcasting with a (CSR) cooperate social responsibility angle. This week that included attending AN RBS FINANCE COMMUNITY INVESTMENT EVENT called “CREATING A LIFE OF LOVE & COMPASSION FOR CHILDREN” in support of Nelson Mandela children’s fund. Also encouraging more young people who want to get into the TV industry to join up with the RTS Futures organization who can help them meet the right TV experts that can help guide their career paths. theres so much out there to help people, much of it is wasted as people don’t know about it. Search and ye shall find!
Next there was much buzz in the music industry’s inner circle about an act that’s about to blow called PJ Morton. Morton is an American writer and producer as well as a solo musician who is the keyboardist in pop rock band Maroon 5. In the past he’s won a Grammy for his song writing and production of India.Arie’s “Interested”. He’s also won numerous awards and accolades in the business and been noticed by AR Rahman (composer for Slumdog Millionaire), who asked him to contribute “Sajna” to the soundtrack and movie for the Vince Vaughn comedy Couples Retreat. As if that’s not enough he’s produced and written for musicians such as Jermaine Dupri, LL Cool J, Jagged Edge, Monica, India.Arie and more. This is a very well noted route –from song writer to star- that stars have taken in recent years to make it to the top themselves. Jessie J and Kanye West are great examples.
Last year he released his first solo recording, “Following My First Mind”, on Lil Wayne’s Young Money label. Adam Levine was on the lead single, “Heavy”. Now he’s about to release his first YMCMB full-length album titled New Orleans on May 14th .So when record industry maverick lady Vivian Scott Chew reached out from the States to invite me to his London showcase I was most intrigued to hear more and meet the talented man myself.
PJ’s showcase was held at a London nightclub that’s been around for years-Borderline- one of the few with a great stage, acoustics and has still kept its name from 2 decades ago!. Most clubs around now have been around for decades and I’ve seen them go through up to 4 name changes! In the house on the night were former Cookie Crew member-Cookie, BBC marketing’s Jay Davidson, Warner Music’s Taponeswa Mavunga, TV editors, A&R reps, record label folk and more. The great and the good in the scene were not disappointed with PJ’s live set-he is a very unique, impressive young man. He played keyboards, sang, rapped, spoke, smiled. His live set was polished and took us on a journey of calm relaxed tracks; sing along fun melodies and straight up jump around club bangers.
Its always natural to compare new acts to others when describing them to people but honestly this act went from reminding me of a little of many of the greats like Stevie Wonder, John Legend and Kanye West. Importantly he was unique in his style. He spoke to the audience; saw us all, had that gift that makes you feel he’s speaking directly to you and by the end of the set had the crowd high and sweaty. When I went backstage to meet him his crew it was the most relaxed pre-show dressing room I’d ever been in. they were chilling, happy, chatting, warming up. The energy was quietly confident and PJ was welcoming, friendly and chatty. Just a really nice guy. no wonder he’s worked with the best. They want him on their team. Lil Wayne and Baby don’t sign up anyone. They recognise talent, nurture it and set it free when it’s ready. PJ Morton is ready. He’s been real! He’ll be on the road again with Maroon 5 for their US and Euro tours. He has his own opening slot in each city and will be playing the O2 Arena June 23 and 24th. like a breath of fresh air in a world where many claim to be real musicians but aren’t this young man is going to do some lethal damage to the charts! watch him blow!