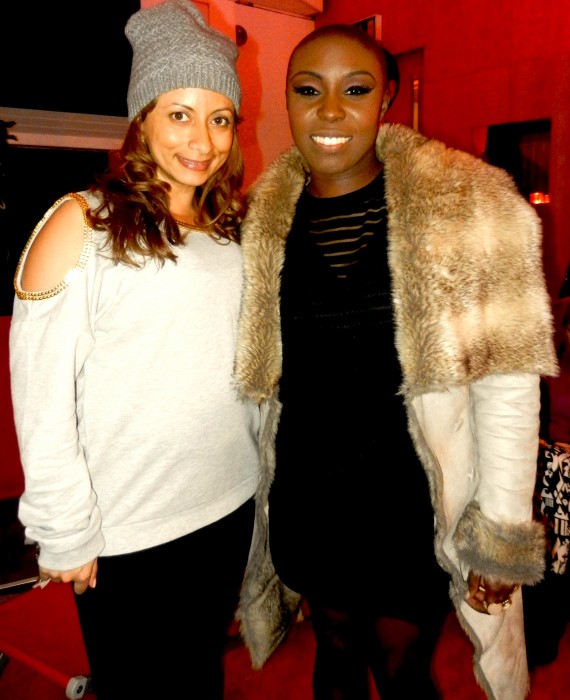 JASMINE WITH LAURA MVULA AT SARM STUDIOS-A STAR IS BORN!
I started the week at The MIND benefit hosted by Harvey Weinstein on Friday night, a swanky charity do with a lot of extremely wealthy folks turned out for a great cause!
The opulence didn’t stop there. we continued with a wonderful weekend of glitz on both sides of the Atlantic! A great way to excite a cold, snowy, soggy February.
Over in los scandalous it was the music industries biggest accolade –the Grammys. Beyonce and Jay cemented the fact that their extended clique is always the hottest. Jay’s boy Kanye has the world twittering about Kimye and their impending baby. Kanye’s ex Amber Rose was so pregnantly huge she could’ve been carrying triplets at the Grammys, Chris Brown –love his staying power but the full top to toe white suit just looks tacky and cheap now unless it’s a la Puffy on a boat and made of linen. Riri in her long red gown for once looked classy and pretty as a princess. Justin and Jay really did their James Dean and Sinatra thing performing suit and tie in their black tuxedos. Of course (Jays company) Roc Nation brunches are now legendary with Jay Brown (Jays right hand) and his team hosting them regularly in various cities around the world. The London ones have been slick and memorable and I hear from my sources that the pre-Grammy one in LA was uber stylish too.
This side of the water Roc Nations Rita Ora has been selling out and performing the hell out of her solo shows across the UK. I love Rita for her tenacity. She’s not a mega perfect vocalist like Adele but she doesn’t need to be. She’s a great performer, with a very fresh unique style and star quality. She has been on the scene years and paid her dues. The main thing I get from her is strength. You have to be damn strong to go through this industry with grit and panache and she’s succeeding so far and making Roc UK look great! This team seems to be killing every department so far this past few months. All jigga ever prophesised in The Blueprint and more has come to be!

The sexy soirees weren’t just stateside though. Here in Londonium it was the biggest thing for the acting accolades as BAFTAs were handed out to deserving folk. Unlike the Grammys which seem to be given out to anyone these days, the BAFTA is a much more hard to come by award and much of Hollywood were here on our shores for the occasion!
I popped on my tried and trusted D&G gown-this time a deep midnight blue one- and gathered up the length in my arms to splish splosh along the red carpet outside the Royal Opera House in my ballet pump flats before popping on my heels in a very undignified manner at the entrance of the venue. I mean I’m not going to be the random nobody on candid camera the day after having slipped in the slushy snowy soggy carpet!.
The turn out was stunning, as you’d expect. All the great and the good from very adept host Stephen Fry, actors Ben Affleck and Bradley Cooper, (these 2 were hanging out together a lot and had every female and male gushing with lust I kid you not!), director Sam Mendes, the ever ravishing George Clooney (us ladies were spoilt!), director Quentin Tarantino who I just wanted to talk to but like the music industry bigwig Lyor Cohen has that really big, intimidating presence. I now do talk to Lyor, I didn’t pluck up the courage for Quentin. Some you win-some you lose. I did however manage to get introduced to the adorable Ben Affleck (J Lo really lost out here!), he was charming and by the time he’d been onstage collecting a couple awards for his film Argo I was in love from afar. Especially when he made his ‘’thank you for allowing me my second act’’ speech. We all melted. Billy Connelly had we and my mate wetting ourselves as he described the award as a ‘’death mask on a stick’’. Samuel L Jackson and Kevin Spacey were on good form and I didn’t even kick Samuel as he walked past after hating his character so much in DJango. 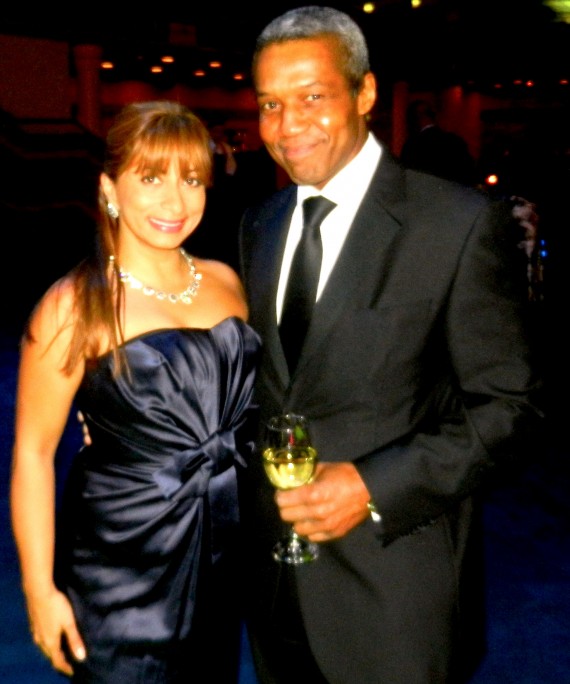 JASMINE AT THE STYLE AWARDS
Then it was the ELLE Style Awards at The Savoy, I always dread fashion events as I feel paranoid with all the dark gothic looking black clothed people everywhere. They always give me that little side eye sneer when I turn up wearing a bright colour-this time red. But this time I was in good company as a few guests decided to ‘’shine bright like a diamond’’. It was a lovely very cool evening with radio 1’s Nick Grimshaw hosting. I hardly know anyone from the fashion scene so I was excited to recognise actor Chris Tucker, rocker Ronnie Wood, singer Katy B, designer Stella McCartney looked tired, rockers daughter Peaches Geldof looked gorgeous, pregnant and chic, MTV presenter Laura Whitmore in a bright yellow mini dress, actress Naomi Harris in a burnt orange long dress, Sophie Ellis Bexter in her usual pretty floral frock look, Daisy Lowe, Claudia Winkleman –always a very chic dresser, worst fashion look of the night went to Gemma Cairney in a frumpy quite unflattering knee length dress.
No one was surprised that a female focused magazine awarded Best Actor Award to Bradley Cooper (presented by Harvey Weinstein) and as much as I like to drone on about Emeli Sandé being everywhere all the time I was secretly pleased she won Best Music Act. Best International Designer went to Stella McCartney, which was well deserved. I think her hard work keeping her mothers legacy for sustainable clothes and veganism is commendable and she truly works her ass off unlike so many other children of superstars that turn up to all these events but yet are known for nothing but their famous parent. I’m afraid the rest of the company I knew little about as they were mostly designers and models whom I’d never heard of. I did spot singers Laura Mvula and Delilah sitting together though-both striking ladies with great music. 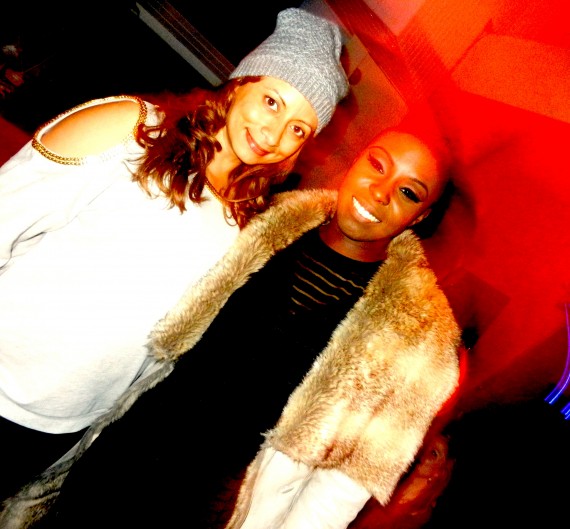 JASMINE WITH LAURA MVULA STRAIGHT AFTER HER ALBUM LITENING AND PERFORMANCE!
The very next day I was honoured to witness the birth launch of another future superstar at West London’s SARM STUDIOS where singer Laura Mvula had invited her nearest dearest (her mum was looking proud in the house) and a few specially chosen industry folks to hear her new album ‘’sing to the moon’’. This young lady has been on all the national chat shows recently and in newspapers as their one to watch this year so I was intrigued to meet her. Laura hails from just outside of Birmingham and was originally born Laura Douglas. Mvula (pronounced mmm-vula) is her married name- from Zimbabwe. It was apparent on arrival that something very special was about to go down. The studios security was extra tight as the phone and gadget police insisted on taking our phones before we even stepped through the door! (No one can be trusted these days-the popes own right hand man was leaking documents not too long ago!). Anyhoo-I digress. Once inside the big heavy secret studio door barmen were offering out wine, spirits and huge delicious cupcakes adorned with Laura’s name. There were even macaroons scattered around. We grabbed a huge sofa before all the seats got taken and settled in. 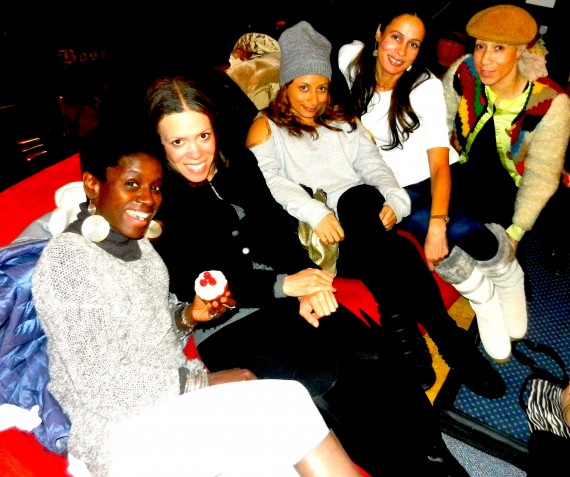 JAY DAVIDSON (DEF JAM/BBC) , ANNELIESE HARMON(V2/MTV/MWAH), JASMINE, JODIE DALMEDA (SBMG/VIRGIN UNITE), COOKIE PRYCE (COOKIE CREW/MUSIC MARKETING)….GRAB A SOFA AT SARM STUDIOS!
Manager Kwame Kwaten (who has a huge history with British music acts Shola Ama, D’Influence, Radiohead, Master Shortie, Rumer etc), welcomed us and asked us to help ourselves to food in the adjoining room. The abundance of Caribbean food was mouth watering. From local Caribbean fooderie Jay Dee’s we gorged on chicken, rice and peas, dumplings and more. Next Kwame thanked everyone in the room for their support of Laura and then introduced the main man Colin Barlow from RCA records who upon hearing one single song by Laura brought the lawyers in to sign her up. He spoke in a very real manner explaining why he found aura unique and admired her courage and brave new sound.
By the time Laura took to the keyboards to perform her song ‘’She’’ we were ready for a full hour of amazing audio luxury.
Laura is petite, pretty and very strong vocally. She was wearing fierce vertiginous high ankle boots, a dress and a fabulous big fur coat. She has a symmetrical clean sculpted look that made her look like she’s just stepped off the catwalk. She lightening the atmosphere by quipping ‘’as my grandma says you better sound good!’’ She has a calm self-assurance about her that’s mesmerising. The track was slow but she carried it in a room of very close listeners. Her vocals are strong and mesmerising. After the first live performance she played us the rest of her album. The experience was akin to a dream. The tracks are all very mesmerising with an old skool Hollywood movie vibe. The tracks have huge layered musical production with drums, strings and more feeling like a film soundtrack. The lyrics suggest a young girl hatching into the world independently and having to deal with life. The album feels like a whole story. It’s very personal. Made me think of Nina Simone, Jill Scott and Janelle Monae. My favourites were ‘’green garden’’ and ‘’I don’t know what the weather will be’’. There was a sense that we were extremely lucky to have witnessed such an intimate evening with such a soon to be huge star. As we chatted afterwards she confided to me that the personal inspirations behind her lyrics were her brother and sister-who had accompanied her by playing in her band on the night. Her manager told me he’s not encouraging her to move down to London laughing ‘’if that’s the kind of music Birmingham encourages her to make she needs to stay there!’’ This young Birmingham woman has Grammy written all over her music.