JANELLE MONAE SHOWCASE AT THE RADIO BAR/ ME HOTEL. 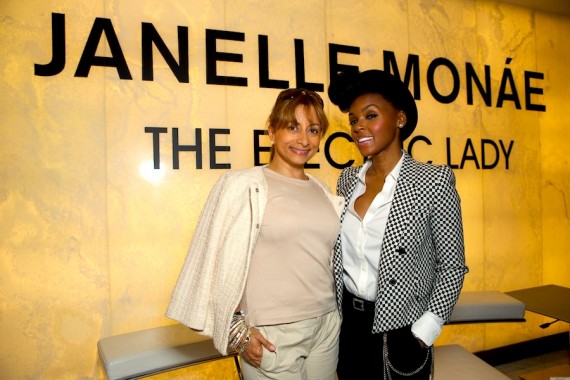 JASMINE WITH ELECTRIC LADY JANELLE MONAE AT HER LONDON SHOWCASE.
PHOTO COURTESY OF PAUL H
One beautifully hot evening, Electric Lady Janelle Monae took over the London skyline in an evening’s performance showcase at the new hotspot for the music industry-the Radio Bar at the ME Hotel. Over looking St Paul’s and the Thames, Janelle welcomed us all to her rooftop showcase ,where she encouraged guests to kick off their shoes and party with her and her team. ‘’It would mean a lot to me if you’d take your shoes off on the grass, this is the American south in London. Immerse yourself! To be really victorious u have to find pleasure in the small things” LOL. 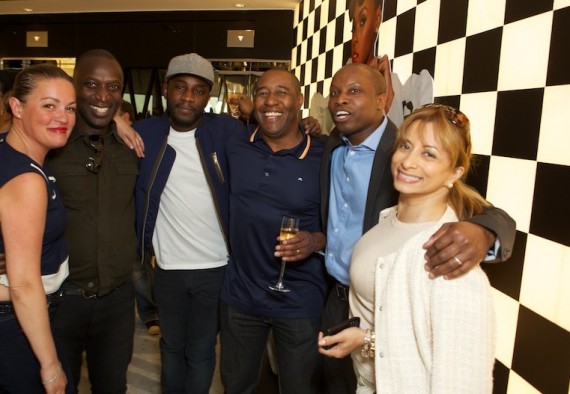 JASMINE WITH JANELLE’S GUESTS INCLUDING TWIN B (3RD).
PHOTO COURTESY OF PAUL H
Janelle was born and bred in Kansas, and like her homie Dorothy in the Wizard of Oz ,really did take the guests to a dreamlike state of happiness with her set, which was infectiously fun and bubbly. The new music reminded me of a mix between Andre 3000, Dinah Washington and Bruno Mars. It was happy. Much needed in todays doom led, materialistic crap that’s often in the charts. 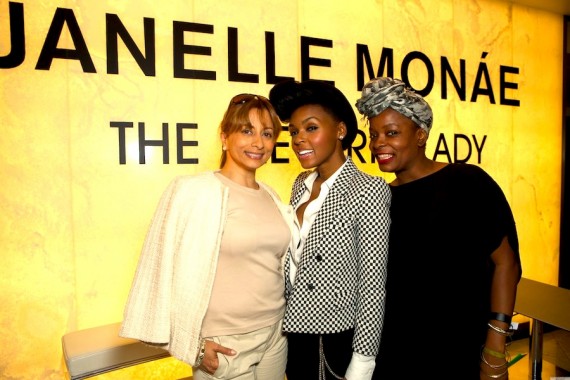 JASMINE, JANELLE AND ATLANTIC MUSIC’S TAPONESWA MAVUNGA.
PHOTO COURTESY OF PAUL H
As the champagne, wine and out of control nibbles (mash, steak, curried cauliflower, chicken skewers, mini burgers) were passed around on silver platters, Janelle served up a set worthy of a full on arena gig. Dressed in black patent loafers, trousers, braces and bowler hat with white shirt and black and white dog tooth checked blazer, her rat pack look started neat and groomed before she unleashed her electric dancing and wilding out onstage which saw the perfectly coiffed hair flung around and falling everywhere! 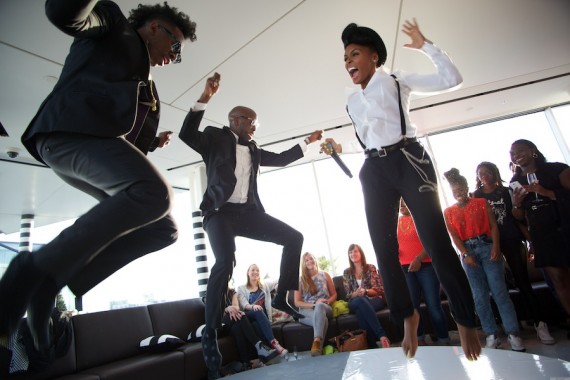 JANELLE AND HER TEAM KILL IT ONSTAGE IN A ONCE IN A LIFETIME MOMENT!
PHOTO COURTESY OF PAUL H
Janelle spoke about her love of art and her paintings. She has a painting of an “Electric lady” and with that title wants to create a label that defies the ‘modelisation’ of women. She explained to us that her new album carries universal stories in unforgettable ways. She was particularly proud of having produced one of her heroine’s Erykah Badu. 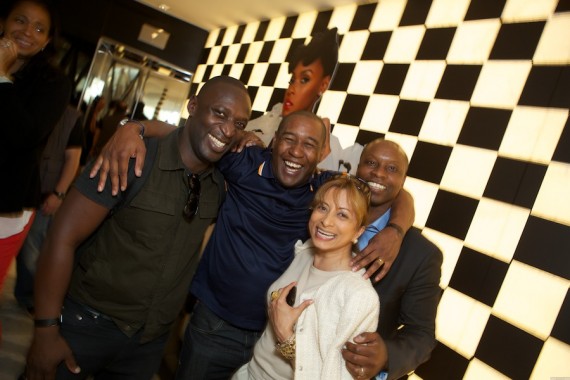 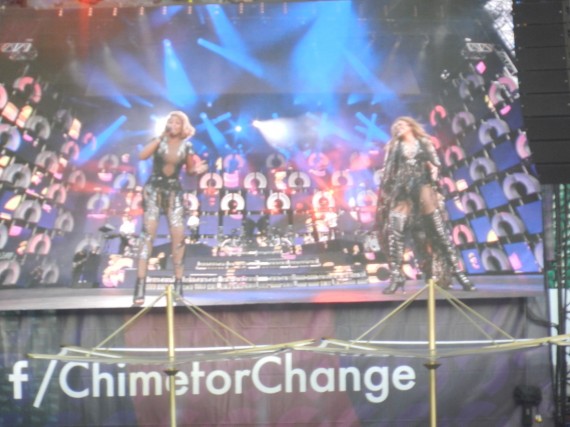 THE BEST MOMENT AT CHIME FOR CHANGE WAS THE J LO/MARY J DUET-UNEXPECTED AND UNIQUE! 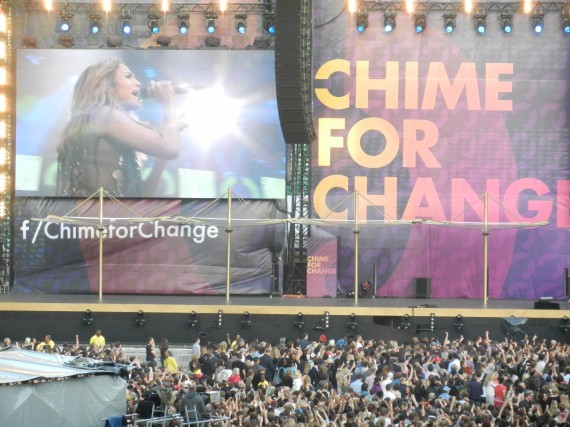 CHIME FOR CHANGE!
The massive Chime for change show at Twickenham stadium was a huge deal! Very reminiscent of Live 8 decades ago it had a stellar a list line up of music talent that was well worth the money 40,000 ticket buyers paid. The show was to bring awareness to female issues globally. Gucci has announced a global fundraising campaign for women and girls who are victims of gender inequality, with a focus on pushing equal access to education, health and justice. Areas such as female health, education, safety and more were highlighted by a host of stars including Madonna, Jada Pinkett Smith, Aishwari Rai, Blake Lively, Zoe Saldana and Freida Pinto. The show was initiated by co-founders Beyonce Carter-Knowles, actress Salma Hayek-Pinalt, and Gucci creative director Frida Giannini.
I was lucky enough to have been invited by my cuz Janet Shaw who was working with the team that put on the whole gig- Control Room. 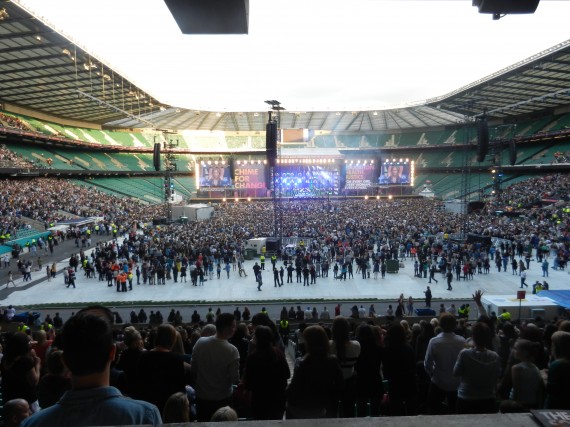 VIEW FROM THE EXECUTIVE BOX AT CHIME FOR CHANGE.
With my mentor Fleur Safarty (ex MTV SVP), we were treated to a spot in the executive box where a waiter plied us with drinks and food which included victoria sponge, scones with clotted cream and jam, giant neon coloured macaroons, sandwiches and more. 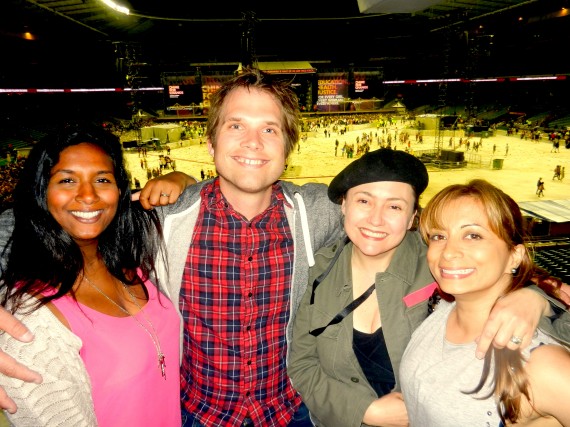 JASMINE WITH FRIENDS PARAMI, ROB AND FLEUR!
Rita Ora and Jessie J were opening warm up acts. That shows you the level of a list that was headlining. We saw Ellie Golding, Iggy Azalea, John Legend and more do their thing before Timbaland came on to play hypeman to all his hits. When Duran Duran front man Simon Le Bon joined Timberland for a Duran Duran song the over 30’s in the crowd (yep that’s me) went mad! It was a big look! Another big moment was just after J lo did her Malcolm X speech “I believe!…..that the girls need the right to education globally”. Halfway through her set the living legend that is Mary J Blige just jumped onstage to sing, “come together” (Beatles) with J LO!!!
Jada Pinkett Smiths speech about women who are human trafficked daily across the globe was sincere and powerful. When the final act came on we were all already in a spiral of roller coasting excitement that was about to reach crescendo heights. Queen Bey came on and killed it in her usual superhuman style with a few of her solo hits, a few Destiny’s Child hits, as well as paying tribute to Whitney…..(And Dolly Parton)…with “I will always love you” .Beyonce still looks like a superhero as she sings and dances to barely any playback…95% totally live! Incredible to witness! A great line up, fantastic live venue, and brilliant all round event for a great cause- KUDOS! 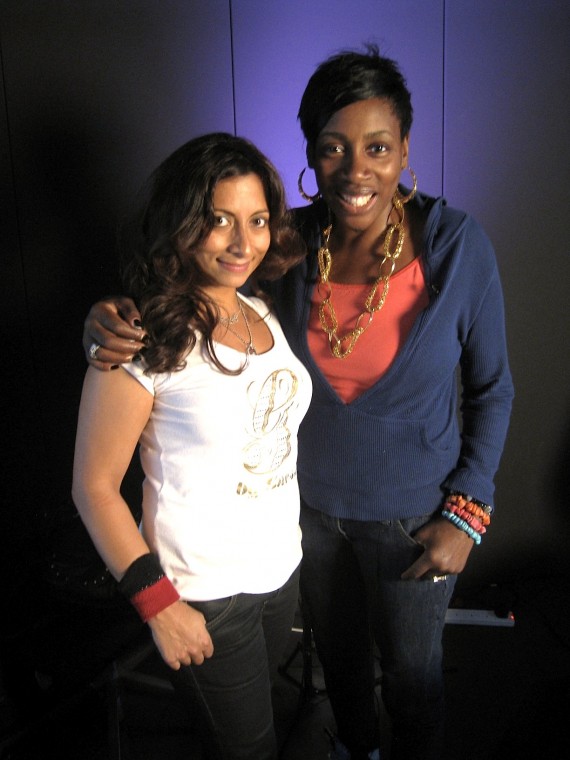 The hilarious Gina Yashere took part in the South Bank Udderbelly Comedy Festival where on a sunny bank holiday weekend, hundreds of people came out to watch her show performed in a giant upside down purple cow. Hence the title ‘’Udderbelly’’. It was great to witness huge posters of Gina all across the river bank before the show. This London lady has come so far. Broken out of the urban UK comedy scene and is now selling out venues across the globe. Pretty impressive!
She was so funny. Her jokes were both shocking hilarious and captivated the very diverse crowd. She shows her freestyle skills by bantering with a huge hen party who were in the audience, and also a young man who attended with his mum who may or may not have only been around 15 and a lil shocked by the X Ratedness of the content which took pot shots and Gina’s own particular crazy point of view on a variety of things including the Olympics, the Woolwich tragedy, Oscar Pistorious, rappers and more. A great cultured way to spend a sunny bank holiday! 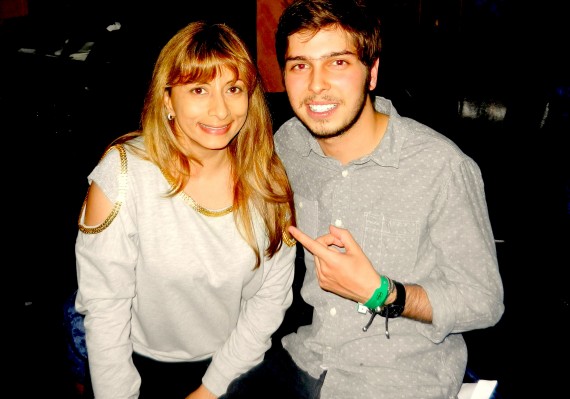 MASTERCARD PRICELESS GIG- RITA ORA AND JOSH KUMRA!
JASMINE WITH JOSH KUMRA- WHO OPENED UP FOR RITA ORA
Miss ‘’killin-it-everywhere-right-now’’ Rita Ora performed at a very special showcase at Café de Paris for Mastercards Priceless campaign. Former Sony BMG boss Mervyn Lyn (strategic partnership solutions), invited me to see rita in action with her opening act Josh Kumra. Mervyn played host onstage for the night and worked the microphone better than most professional DJ’s usually hired to this. I guess he’s spent decades telling hosts what to say and how to say it- he’s now able to do it all himself!
Josh has been silently putting his work in with his manager former Sony boss Matt Ross. Josh’s acoustic set showed him to be a very capable and pleasant music act. His chart-hit time is coming soon. Rita, as expected, was mesmerizing. With her longer than long, poker straight GHD hair. Looking like a fly sexy mama in her black mini skirt, patterned see through blouse and vertiginous heels. Rita is an exciting performer and has moments that her fans remember. One such moment was when she grabbed a pair of drumsticks and used them as accessories to beat aggressively on a drum during one track called “making me uneasy” she has numerous Call and response duet moments with her crowd encouraging them to mimic her vocal training riffs. Another moment was when she covered a no doubt track stating she loved Gwen Stefani and been influenced by her for years hence the red fire engine lips and peroxide hair. She also did a cover of nerds “she wants to move” paying special attention to the ‘’she’s sexy!’’ lyrics. Clever girl. There was the now predictable homage moment to biggie as she spat his lyrics over “it was all a dream’’ which took us slickly into biggies “Party n bullshit”/that’s just how we do ” cover hit. A final memorable moment was when she grabbed and put on a fans “party n bullshit hoodie when she sang that song and then another fans cap for “rip”
There were a lot of suited business types up in our area who were hysterical with happiness dancing away to Rita-such is her aura.
Rita told us her 2nd album “out of love” was coming very soon and performed us a couple of exclusive songs from the new work. One titled “Boy you’re makin me fall head over heels out of love”.
In the VIP audience were TV talent music booker Susan Benitto, Sugababe singer Keisha, PR maven Vanessa Amadi, photographer to the stars Paul H, singer Lemar and more. A lovely, exclusive, evening. Congratulations to Shaun Springer at MasterCard. Another priceless night for music fans!