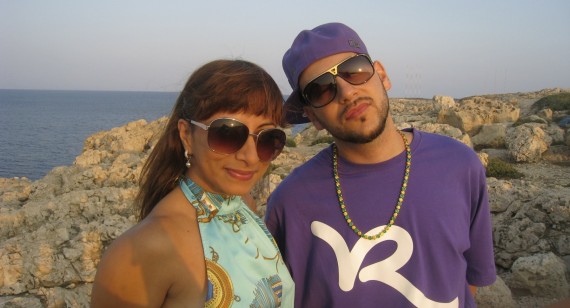 JASMINE WITH A.M SNIPER IN CYPRUS!
This week Jasmines Juice is tipping its hat to acts that keep grafting.
The ones that win are the ones that stay in the race. I recall 2 decades ago when Kylie first declared her interest in going from being an actress to a music star. She was the most ridiculed woman in music. She stuck at it and over the years the graft equaled success and icon status.
2 acts that I’ve seen multitask and work hard at their craft this past decade are male MC A.M Sniper and female MC Shystie.
Anthony Melas aka A.M. SNiPER is the main man out in Ayia Napa.He is the man that can in Ayia Napa yet he was born in England and grew up between London and Cyprus.
Fast-forward twenty years and A.M Snipers music is being played across Europe, he’s performed and collaborated with superstars from both sides of the Atlantic such as 50 Cent, Memphis Bleek, Akon, Wiley, Lethal Bizzle, K Koke, Sway, JME, Ghetts and Rick Ross and appeared in numerous publications throughout Europe.
I first came to hear about Sniper (as he was known back then), during his time with the chart-topping So Solid Crew, who he produced for as well as featured as an artist. This past year Radio 1 DJ Charlie Sloth has supported snipers music. The first single of 2013 to give us an insight of what is to come is the A.M. SNiPER humorous take on British bling (due for release in June). “It’s Big (The Kettle on my Wrist)” was written and produced by A.M SNiPER and is a “cockney” take on the rhyming slang for watch – kettle! On first view of this video it reminds me of a Busta meets Ludacris video. Its humorous, witty and a fun watch.
I caught up with A.M Sniper this week to ask where it had all gone so right! He laughed as he revealed ‘‘its big’’ the Video came about like this. I’m a English/Cypriot – and the video director Sheriff Francis is a video director who is Egyptian Greek, with millions of video views in his fan base. He reminds me of a European Hype Williams. I reached out and asked to work with him. We worked on the track together. He got it from the get go. A lot of people don’t always get the sarcasm I’m attempting to portray in this track and mistakenly think I love bling. I’m taking the piss, not trying to be materialistic. As soon as the director told me ‘’I see a Zulu chief opening up the shot’’ I was sold. It was mad fun on the set in Mayors Hotel in Napa, the AENEAS. What I wanted to achieve was the show people’s uniqueness in this video and how they get along. You can see an Arab sheik, a Mediterranean guy, a black golfer, a female bodybuilder…all different and unique. I used to notice a lot of European rappers wearing a new york Yankees hat, I went for a kettle aka watch, that’s closer to my culture than a NY Yankees cap! I was trying to show that music is superficial, you know me, I never use my money to utilize my music. a lot of current us hip hop albums sound like shopping catalogues’’
A.M Snipers Album ‘’1am’’ is what he’s working on right now. The ‘’a.m’’ are not just his initials. They also stand for the time of day he’s best-the early hours. He shrugs ‘’my name one day could just be ‘am’’
Ever the survivor, he’s always being hit with obstacles, trials and tribulations. ‘‘Between 2004-2011 I’ve been hit with numerous legal court cases to do with my previous music deals with the Around The World single with Roc A Fella, the music industry, contracts and record labels shutting down- this is the reason my releases have been inconsistent, but I’m a seasoned fighter LOL’’’’
In 2011 a lot of my frustration was released on my EP that I put out, after that physical and mental release I was ready to do an album, 5 years ago my mainframe was different-I wanted a no 1 but now I’ve gone back to scratch mentally, I’m proud of my journey. When I was 16 I was a DJ now I’m releasing records!’’

Asked about his friendship with Charlie Sloth he recalls ‘’Charlie , back in the day when I was doing stuff with Eminems DJ- Green Lantern, Charlie was doing a reality show called ‘’Being Charlie Sloth’’. Back then Charlie wasn’t as big as he is now but he’s the same guy today, he’s still real. We both wanted to create what the Americans have created in the states. Aside from UK festivals Charlie’s music festival ‘’Fire on the beach’’ in Aiya Napa (July 13, Aug 3rd)…is the only other festival outside of the UK that highlights and champions British acts. Regardless who you support it’s a unified scene. Devlin hasn’t been here before so that will be good too’’.

This summer in Napa, A.M Sniper will be performing with Dappy, K Koke and many more at “Fire On The Beach” and Labrinth and Tinie Tempah at the “Summer Love beach music festival” He smiles ‘’its going to be a successful summer. I have a couple new singles that I cant wait to perform called #BusPass with a surprise feature and ‘’no where’’, which can also be read as #nowhere ‘’now here’’.

Asked about the UK scene right now he nods ‘’ I love Rudimental, they make me feel emotional. I’m also very impressed by Naughty Boy. His numbers are real but he’s not about hype on twitter and stuff-that’s very impressive! I don’t like to be tagged as a part of only 1 scene. I chill with Giggs, Wiley. 1 is grime, the other is hip hop I like to stay diverse’’. 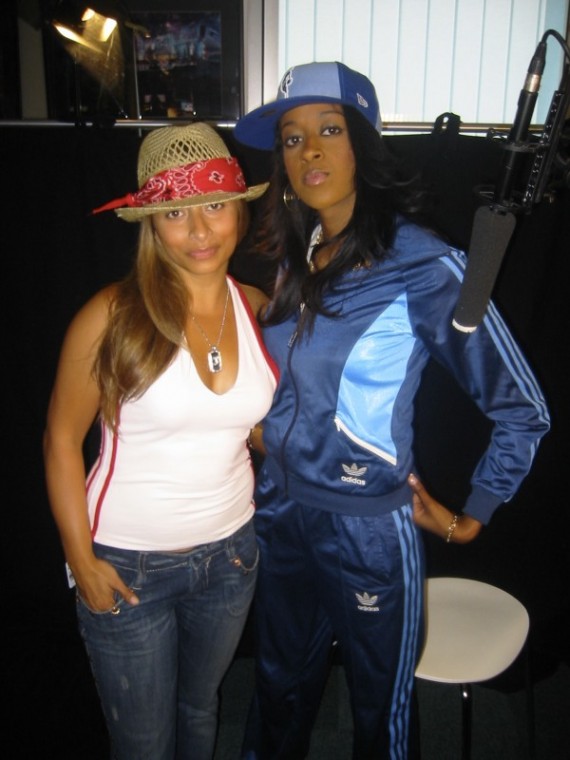 JASMINE WITH SHYSTIE-10 YEARS AGO DURING HER ‘DUBPLATE DRAMA’ ERA
Like A.M Sniper, Shystie has also been known to me for over a decade now. She used to be the lead actress in a very high rating MTV BASE show called Dubplate Drama. She was a mesmerizing actress who made it look easy to step sideways from music to the TV screen. But her heart lies with music. Over the past decade she’s grown up, found herself and focused on her music and is looked up to as a positive female giving breaks and advice to the younger females that are coming up after her. 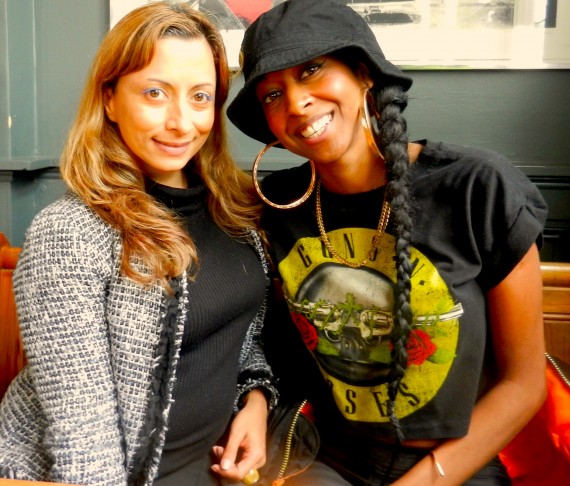 JASMINE WITH SHYSTIE 2013
Shystie, her manager Christian and I met up for a lovely lunch in Notting Hill last week to talk about her new music and return to the scene.

Last month she released ‘’Pinkmist’’. She explained the title as coming from the army soldier’s phrase about hitting targets and being confident.
She regained her music mojo after a holiday to Barbados after which she returned feeling fresh and rejuvenated. She found herself a new manager and took a year to work in the studio, listening to music on Youtube and listened to loads of Doc Brown and Missy Elliott.
She recorded new material in her hometown of Tottenham with her producer Elzbeatz. The new material is a lot more provocative than her past work. She laughs ‘’”We all gotta grow up sometime and get sexy”. I questioned some of her risky song titles. ‘’”Gimme head” is just fun talking to guys. That’s my favourite song. It’s not slutty, more empowering. My new stuff has more melody, its more sing song’’.

SHYSTIE 2013 LOOKING ALL ”GROWN AND SEXY”
‘‘When I listen to new skool rappers now, all their materialistic stuff is boring. I gravitate towards the older acts. Even when Missy recently dropped ‘Triple threat’ it was amazing’’. It’s refreshing to hear Shystie speak positively about female acts that are her peers. Especially since she had a very public drama this year with fellow American MC Azelia Banks. Shystie admits the experience is behind her and it hasn’t affected her wanting to work with other female music acts.
‘‘As far as I’m concerned I came, I saw and from my experience I have conquered. I’m not bitter, suspicious or burnt by the experience. I’m grown and will move on to the next one, things like that don’t stop my path-its predestined’’. 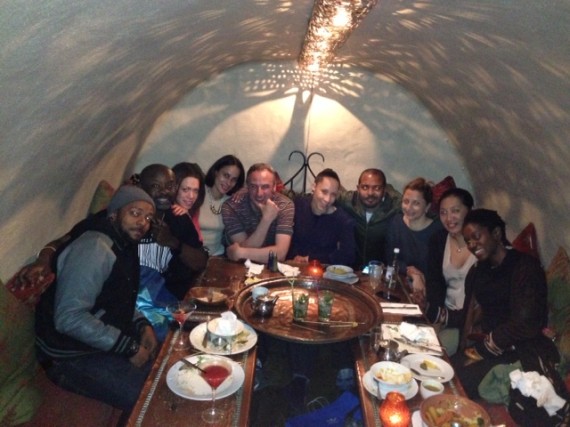 JASMINE AND INDUSTRY FAM.
Finished the week with dinner with my external family. A lot of London’s movers and shakers are in this photo- see who you can spot! x