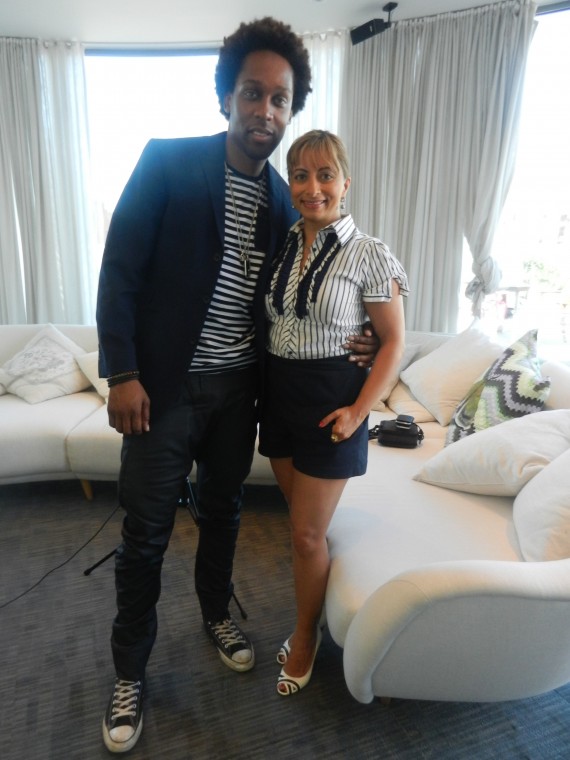 JASMINE WITH UK’S FINEST- LEMAR!
Summer in London really is the best place on earth to be when the weather, great events and good times collide like this past week.
The eyes of the world are on our tiny capital and its been rocking!
With the Jamaican 50th independence year celebrations going on we’ve been flitting from the Jamaica House venue at the 02 and the Puma Yard at Brick Lane for music, food, rum punches and good times! You can never see Usain Bolt throw his swaggerlicious poses too much. He’s a living legend. A true showman. 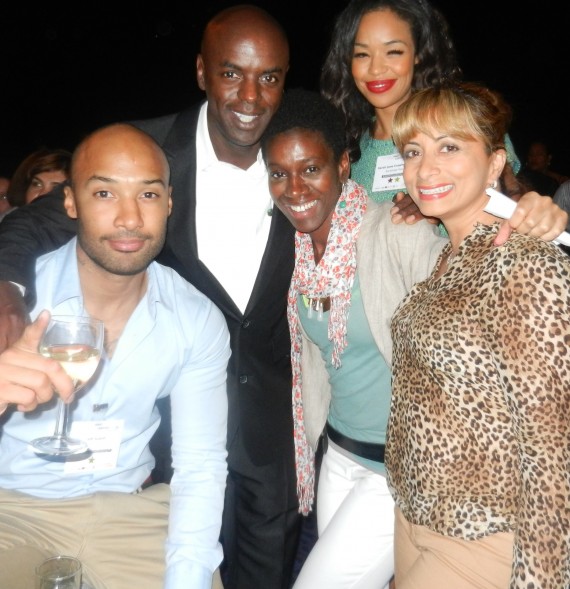 JASMINE WITH FRIENDS INCLUDING RADIO 1’S TREVOR NELSON AND SARAH JANE CRAWFORD at the Caribbean EXPO’s ‘Soul Fusion’ event !
All things Caribbean continued at the Caribbean EXPO’s ‘Soul Fusion’ event in the fabulous Great Room at the Grosvenor House Hotel, where the cream of the Caribbean’s business men and women, with a sample of some of their finest musicians, were on hand to entertain us. Fancy nibbles and wine were on tap to add to the liming experience. The event was hosted by radio 1Xtra’s Trevor Nelson and Sarah Jane Crawford who introduced acts like Belo from Haiti , Michele Henderson from Dominica, Dominican Republic songstress Xiomara Fortuna, one of the most creative composers in the Caribbean who combines a mix of Latin, Brazilian Afro funk and Mystic from Guyana. Many of the crowd whooped and cheered as a music act from their native heritage island took the stage- Dominica most definitely won the volume for mirth prize! The vibe was warm, proud and unique. 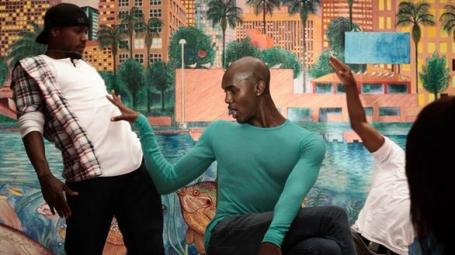 LEAVE IT ON THE FLOOR-HAD AUDIENCES CAPTIVATED!
Next I attended the film premiere for Leave it on the Floor. A film focused around the young gay and trans-gendered mostly African – American communities in L.A where contemporary voguing, ball culture and fashion are prominent. On arrival I could see that I was way under dressed as all around me were 8 foot tall trans gender groups dressed in vertiginous platform heels, fishnet tights, crazy eyelashes, slinky ball gowns, lots of sequins, towering feathered headdresses and truck loads of make up. I was sat next to actors and luvvies and directly behind me was Simon Cowell’s mate Sinitta.
The film is based around young gay African Americans whose stories see them rejected by their families, their struggles dealing with things alone, on the street and seeking a family with similar minded communities. The film leaves you with in your face emotion, OTT extremes; hold no bars feistiness and very fabulous dancing and fashion scenes. The fashion runway is on fire; the storyline with its focus on victims of violence and exclusion is heart breaking, exec producer Sheldon Larry does a great job of bringing home the message that ultimately we are all one and should encourage inclusivity and not judge peoples sexual or other preferences and choices. A great, groundbreaking, fun and fiery film which I know will connect with many that need refuge in their world.

The same night I got my sexiest stunner shades out for Princess Nyah’s birthday party at Cherry Jam in West London as it was a ‘’wear your best sunglasses’’ party. I like to keep up with this young ladies goings on. She’s inspirational as an artist and as a mentor, and inspiratory amongst young people with her giving entrepreneurial spirit!. When I arrived the party was in full swing with foxy ladies and slick looking guys getting their party vibe on. We enjoyed scoffing her Nike air Jordan cake that was being guarded safely by her lovely mum. In the house was R&B act Angel, A&R Ben Scars, music manager JP, and all of Nyah’s nearest and dearest. Happy Birthday Nyah!

Finally I was honoured to be invited to catch up with singer Lemar on the brink of his new music release. Lemar’s latest single Invincible is out now but he’s been away from the mainstream for a while. I was eager to find out the latest in this Tottenham natives life! My memories of him are as fresh as if they were yesterday.
A young, keen, well mannered lad with a voice reminiscent of the late Luther Vandross who impressed radio and TV bosses many years ago with his music on a TV reality show (Fame Academy) and has now made a name (and money!) for himself all over the UK, Europe and Asia.
My favourite headline during his early days was by the Daily Mail ‘’Can you remember who beat Lemar on Fame Academy? Thought not. Three smash-hit albums later, he’s the one living the high life’’. I remember being told that his mother, Edna, had passed away from breast cancer a year after he won Fame Academy and was on the brink of his first big hits. I was so saddened to imagine the loss he must’ve gone through with memories of his mum supporting him whilst he was a former bank clerk. Now his dear mum had missed out on seeing this fine young man truly blossom. The timing still brings a lump to my throat at his ever-present grace.
I continue to love his humble personality, a grafter and a genuine nice guy whether accepting awards or supporting Beyonce on tour in Paris – I’ve followed his career with pride. He’s won Brit Awards and Mobos- something many in his field with much bigger profiles haven’t achieved-but remains as sweet natured as the first day I ever met him when introduced by his former radio plugger – the legendary Jennifer Mills.
I turned up with my LONDON3760 camera crew to EMI HQ to find both Lemar and I had turned up to work dressed the same that morning. We’d been inspired by the nautical French blue and white stripe look and laughed as we greeted each other on our good taste!
We got straight down to business with Lemar telling us all about his impending 5th studio album which is out any day now. ‘’I really want to develop and improve myself as a songwriter as well as a singer and performer. This album it’s going to have some Soulful moments from the singing and also on some of the songs on the actual instrumentation. But I’ve tried to experiment a little bit as well. There are some tinges of rock sometimes, so good pop melodies as well. So hopefully people will like it’’.

As the recent 1 year anniversary of the riots had passed I wondered what he had made of the scenes unfolding outside his home ground. ‘’I don’t want to say shocking, I think unfortunate is the right word. Nobody wants to see something like that happening in the area where they grew up. My Dad still lives in the area and my family home is there. Obviously I was nervous, there were a lot of phone calls flying around. A lot of people that I know were either affected directly or indirectly by what went on. I think it just reflects the frustrating times that we are in’’
Lemar agreed the police have a difficult job and were out of their depth ‘’there was a family that was grieving and they should have been addressed and they should of got there apology and explanation on the day on a personal level. I think hopefully they will get to the bottom of that and the family will get their peace so to speak’’.
I felt that young people and black music was unfairly blamed and alienated by the press and media as being to blame. Lemar agreed ‘’I don’t think it was down to the young people. As we saw it started with the protest that wasn’t handled correctly. In frustrating times when people are backed in a corner they act differently. I just think the fact that it didn’t only start in Tottenham and end in Tottenham you know it started and spread around the whole country. I think that is a proper reflection of just how frustrated people are and how a lot of people feel that they don’t have a voice and aren’t really heard. Sometimes if you maltreat a kid for long enough they lash out and lashing out doesn’t mean they are a bad kid it just means they haven’t had the proper attention, they haven’t been addressed correctly’’.
‘’I think when it comes to the younger generation emphasis should be more on family community and how we are having an impact on them socially more so then music. Because then if everyone is having a good experience in general then music would be just singing about good stuff. But because some people are having bad experiences and some are having good, people are going to sing about good/ bad – that’s just life’’
Being a father and someone that’s seen enough on the streets he grew up on Lemars message to the youth is simple ‘’I would tell the young people to better themselves that would be my challenge. If you think you’re a runner run the fastest. If you think you’re a songwriter write a better song than you did yesterday, I think the challenge is to better yourself in all areas in all areas of your life. If you’ve got a problem with anger challenge yourself to be calm. If you’ve got a problem with being to calm, challenge yourself to be more outspoken you know, better yourself’’.
Finally Lemar acknowledged the current Olympic and Paralympic fever was healthy but ‘’We’ve got the whole world looking at Stratford but I’m hoping that swiftly after the Olympics we start seeing some changes in local areas and it’s just not all talk. I think there will be a lasting legacy -you know these things bring the focus to London and we build these huge areas that have the capacity to entertain huge numbers of people for sport I think when everyone has left and the focus isn’t on London anymore, how do we utilize it?’’
Politicians are you listening? Lemar’s speaking?