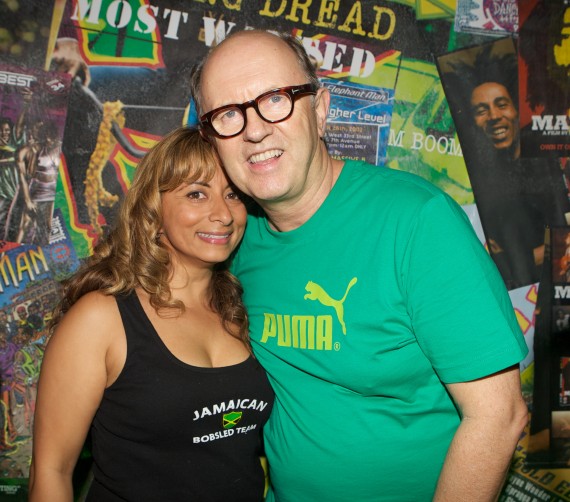 JASMINE WITH REGGAE DJ LEGEND-DAVID RODIGAN AT PUMAYARD!
My Olympics fortnight was culminated at the Pumayard in Brick Lane (which was buzzing like carnival with long excited queues everywhere), East London where an unused space had been transformed into a feel good Caribbean style yard venue where you could sit and feast on jerk chicken, curry goat and rice, vegetable curry, or sip a Wray and Nephew cocktail, play table tennis, play cards with giant cards, computer games or dance to their nightly music acts and djs. The vibe was very relaxed and friendly and the atmosphere just very laid back. 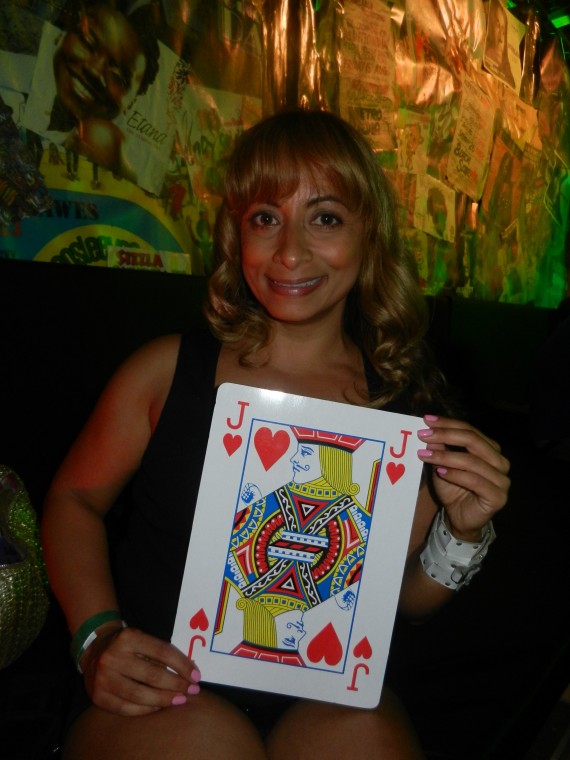 ”J” FOR JASMINE, JAMAICA, JERK CHICKEN…..
The line up had in previous days included reggae stars Gyptian and Shaggy but the night I chose was to go and see the legend- British radio and sound system DJ David Rodigan MBE!. I imagine you all know about Rodigan? A white man in his 60’s who has djed and brought the reggae sound to Radio1 Radio2, Kiss and Capital. A man who has earned the respect of sound systems and reggae artists around the world. Rodigan has clashed established sound systems like Bodyguard, Killamanjaro (selected by Ricky Trooper), Stone Love, Barry G and Bass Odyssey.
He has serious dub plates and can mash up any sound! (His wife is actually in some of my gym classes and clearly has dance rhythm for days!).
The night before the whole JA team including the main man Usain Bolt had been down at the venue jamming to DJ Manny Norte and this evening the DJ’s were Norman Jay and Rodigan. I took advantage of the food and drinks as I watched the closing ceremony on large screens. Just as I was thinking ‘’its 10pm on a Sunday night-I really should get home so I’m fresh for work tomorrow’’, Rodigan threw down 3 hours of such amazing tunage that I threw my handbag on the floor and danced about wildly reminiscent of the days I attended blues parties in Southall. I’ve never actually seen Rodigan live and tis was amazing! Watching him is fascinating as he jumps and bounces with animation and a constant smile on his face. He practically went through a full on aerobics routine behind the decks to the delight of the hundreds of partying Pumayard attendee’s! 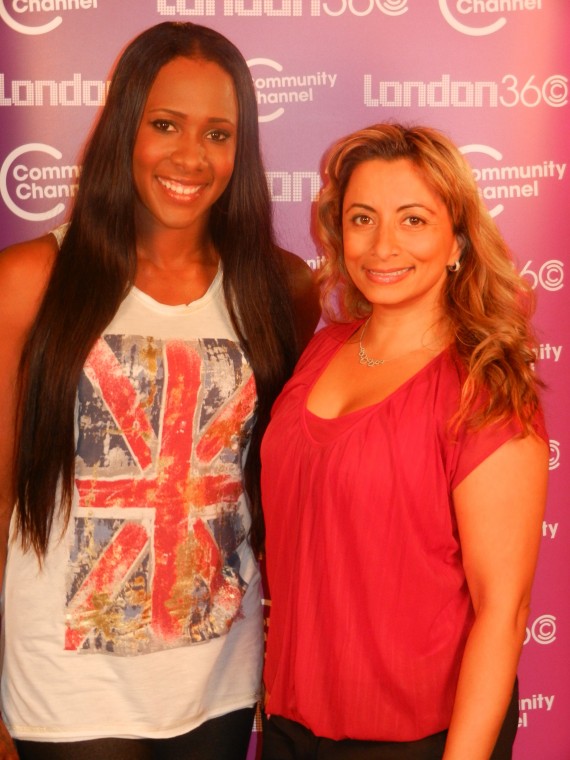 JASMINE WITH OLYMPIAN MEDALLIST TASHA DANVERS.
Olympic athlete Tasha Danvers popped up to the BBC studios to film presenter links for the LONDON360 TV show. What a natural she was! Read the autocue like a true champ. Our camera crew and reporters were fabulously impressed –this lady needs her own TV show! Gorgeous looks, a body to die for and bucket loads of quick fire personality-why has no one snapped her up yet?
Speaking about her experience at the Olympics she revealed ‘‘as a professional athlete I was able to compete in 2 Olympic games. A finalist in Sydney 2000 and a bronze medalist 4 years ago in Beijing, China. I can honestly say it was an amazing experience but having been on the other side of the finish line this time around, on camera in London I have to say I probably enjoyed it even more than when I was competing’’.
Speaking about the London2012 legacy Tasha enthused ‘’What the Olympics means to me is really encompassed in the Olympic values: inspiration,determination,excellence,equality,friendship,respect and courage. And for a few weeks the athletic elite are showcased in the greatest show on earth in the hopes that their performance will inspire others, young and old to their own personal greatness’’. 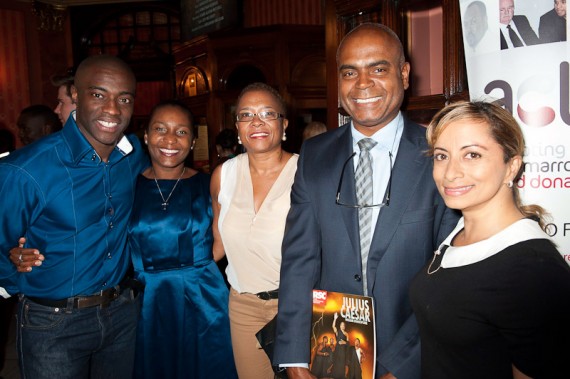 JASMINE WITH TIM CAMPBELL AND HIS WIFE JASMINE, BEVERLEY DEGALE AND ORIN LEWIS (ACLT) AT ST MARTIN’S LANE THEATRE.
Next I was honored to be invited to the Royal Shakespeare Company’s Julius Caesar press night in association with the ACLT and their founders Orin Lewis OBE and Beverley De-Gale OBE to watch the production of Julius Caesar by William Shakespeare, starring African Caribbean Leukemia Trust Ambassador Ray Fearon. As we approached the Noel Coward Theatre in St Martins Lane it was clear this was a full on celeb affair as the paparazzi were snapping away at actors and literacy types all over the place. A gorgeous young lady approached me and said in a sexy American drawl ‘’I love your shirt it’s so cool’’. I thanked her and carried on chatting to actors Jocelyn Gee and Rudolf Walker when my mate interrupted to inform me that the young lady was none other than Hollywood actress Rosario Dawson! Well that’s cool I thought ‘’my Primark t shirt’s been given Hollywood approval lol!’’ the theatre foyer was buzzing. I spoke to Tim Campbell and his wife Jasmine, Henry Bonsu , Trevor Phillips, Jimmy Akingbola, Chizzy Akudolu,Lenora Crichlow, and Malorie Blackman amongst others.
The play was amazing-really very powerful. I wasn’t the biggest Shakespeare fan at school and I’ll admit it was a bit of a struggle getting into the play for me at first but a few minutes in and then accustomed to the style and characters African accents in front of the Italian coliseum set I was right into it!

Finally my new elite personal trainer Saskia Moynihan popped up to see me at lunchtime in the BBC car park to work my butt for an hour. It was incredible! The circuit style exercises were really hard work that heard me panting like never before. My core strength and flexibility isn’t too bad but cardio that involves sprinting and frogs is my kryptonite! even though BBC staff passed by and chortled I was fully focused and determined not to give up or moan. After all, how else will I get an ass that you can bounce pennies off in a few weeks?