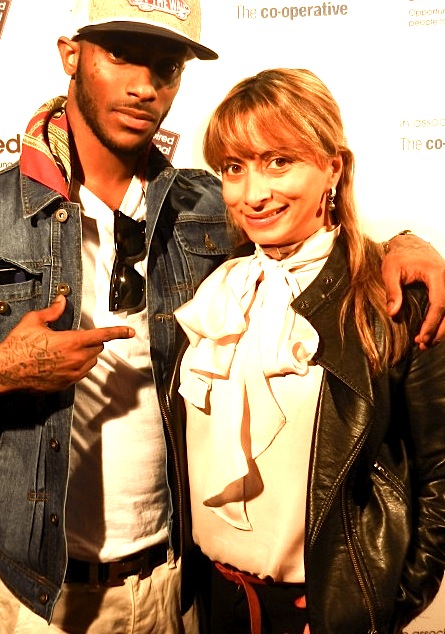 JASMINE WITH WEST LONDON MUSIC STAR-ANGEL.
MUSIC
A busy week. Music stayed strong on the scene with Angel having an album launch party at the Mayfair Hotel where so many other young peers joined him to show their support. In the house sipping lots of Red Bull special edition beverages were; Wretch32, Tinchy Stryder, Fazer, Stooshe, Leigh Anne from Little Mix, Jamelia, Nate James, Oritse from JLS, Daley, Cleo Sol, G Frsh and Preeya Kalidas.
On the same night Ty had a show at Jazz Café which according to all accounts was great too! 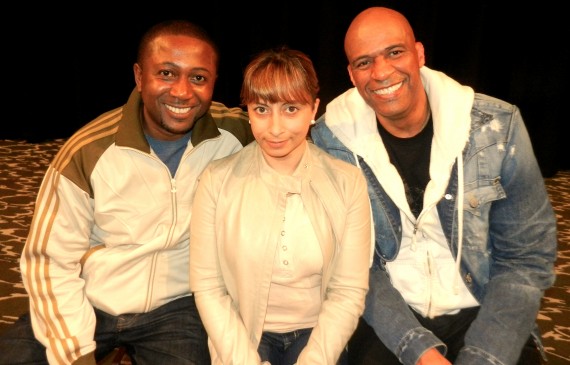 FILM
The world’s getting smaller. We are no longer hostages to national media broadcasters who transmit every story from their own individual political angles. With social media connecting us in seconds to people across the globe, the truth is closer and more available than ever.
In my youth in the 80’s, I devoured media in the only ways available – print press, radio and TV. Therefore I was told the world’s news stories from one point of view. The British one. Like many, I still jump daily from many news platforms so I can see the same story from different points of view. Luckily I’ve also always worked in media establishments where I have access to a multitude of daily press. I like to think I see a balanced view of the world’s news.
As a teenager I recall visiting my parents birth homes in Kenya and India and my cousins laughing at my ‘’western brainwashed way of thinking’’ as I staunchly championed and supported my colonial British roots with pride.
A big eye opener was after 9/11 when; their thinking on why it had happened, who had caused it and why it wasn’t such a bad thing, shocked me to the core. Viewing their news channels and papers in Africa and Asia made me see that the world sees the west aka the USA ‘’and its puppy dog’’ – the UK, as the worlds playground bullies that pillage other countries for their natural resources, lie to justify their presence in other countries and think its ok to police the world.
Today it’s a very different world. Social media means that we hear the truth and diverse points of view without propaganda clouding our judgment as much as it once did.
Politically exposing documentary film makers used to be few and far between. Michael Moore and his peers make revealingly exciting docs that get mass media promotion but there are millions of lesser known doc makers that are about to break through the big screen horizon, and this week I was lucky enough to see 2 films by 2 very brave, pro-socially minded film directors.

The first was a movie about Zimbabwe leader Robert Mugabe. The second was called ‘’ONE MILE AWAY’’ (which I will tell you about next week).

Mugabe – The man that I had been informed by the western media was an evil villain. A dictator who was evil and needed to be brought down. The film was titled ‘’Mugabe – villain or hero?’’. Of course many of us would think clearly-villain! There are always three sides to every story though, one side, the other side and the truth.
Riverside studios in West London held a special screening that saw a diverse audience attend to make up their minds about the title. The doc was made cheaply. But its not its filmic qualities we are interested in-it’s the story.
The story of Zimbabwe, its people and history was told in an easily digestible manner from way back when it was called Rhodesia. The country was one of the last in Africa to fight for and win its independence from British colonization. The film showed how Mugabe was once a revered hero that moved in social circles with every great world leaders including American presidents, British prime ministers ,The Pope and even our Queen!. He was knighted by our Queen and visited London as her guest many times.
So where did it all go wrong? It seems that was when he decided to make the call for ‘’Zimbabwe for Zimbabweans’’. When he had to free his country and people of British rule he was suddenly cast as the evil dictator. In the now infamous Lancaster House agreement, Robert Mugabe and his supporters were pressured into signing and agreeing to wait ten years before instituting land reform. At the time, an agreement under Margaret Thatcher’s government had promised Zimbabwe that 10 years after signing the Lancaster house agreement, Zimbabwe land would be handed back to the people of Zimbabwe from the white farm and land owners. However once Thatcher was ousted and a Labour government took over the UK, they reneged on the agreement whilst Mugabe had played everything by the book. The then letter from Tony Blair’s cabinet member Clare Short, told Muagbe in no uncertain terms, that “I should make it clear that we do not accept that Britain has a special responsibility to meet the costs of land purchase in Zimbabwe. We are a new Government from diverse backgrounds, without links to former colonial interests. My own origins are Irish and as you know we were colonised not colonisers’’ and would not stick to the UK’s agreement.
Mugabe argues that land remains an issue because of the constraints placed on him by the 1979 Lancaster House agreement to end white rule in the former Rhodesia, and Britain’s betrayal of the promises it made to ensure a settlement. Since independence, only 10% of arable land has moved legally from white to black hands. Mugabe’s detractors say that that the black people that Robert Mugabe gave those farms to are political supporters of Mugabe who were given those farms as payoffs.
History states that more than thirty years after ending white-minority rule in Zimbabwe, Mugabe accuses the United Kingdom and the United States of promoting white imperialism and regularly accuses opposition figures to his government of being allies of white imperialism. When the United Kingdom once condemned Mugabe’s authoritarian policies and alleged racist attitudes as being comparable to those of German Nazi dictator Adolf Hitler, Mugabe responded with an extremely controversial remark, mocking the UK’s claims by saying about himself and his policies that “I am still the Hitler of the time. This Hitler has only one objective, justice for his own people, sovereignty for his people, recognition of the independence of his people, and their right to their resources. If that is Hitler, then let me be a Hitler tenfold.
Mugabe then left with no choice but to take matters into his own hands had to take the land back for his people by force. In any change to society, wars are fought and there are many casualties. Many would suggest that Tony Blair is a much bigger war criminal than Mugabe for sending our troops into Iran for the weapons of mass destruction drama. I don’t want to spoil the film for you but it an absolute must see to get a more balanced view of the relationship between Africa and the west. At one point in the film we even see leaders from China and Russia siding with Africa on the unfair sanctions and interference of the UK and USA in Zimbabwe. If the world is slowly getting wise to this concept of western bullying is it a wonder that we no longer feel safe in the UK anymore? What will happen in a generation when Africa regains its once former glory pre-slavery and colonization? Are we ‘’the West’’ doomed?

And here’s the most intriguing part of the story-this documentary was made by Roy Agyemang who used to be a KissFM DJ and TV producer for “Katie and Peter – the next chapter”
After the film there was a Q&A session where Roy revealed, “I wanted to show that Africans aren’t just killed by Tarzan. I went out there a proud British Ghanaian. I reconnected stronger with my African heritage – there’s no doubt about that. The UK only show press images of African leaders as negative dictators so I was spurred on to find out what was behind the headlines, we went out to Zimbabwe for 3 months and ended up there for 3 years! We were constantly fobbed off about getting interview time with Mugabe and at times did fear for our lives’’.
Now readers, I thought I knew the stress of making docs for usually a few weeks, with famous talent, albeit mine were all MTV music acts. Getting through layers of record labels, agents and managers is excruciatingly crazy at times, so I can’t imagine trying to work on a film for 3 years and risking my life in another country where government sensitivities are concerned.
Roy continued his thoughts on Mugabe ‘‘We in the UK awarded him a knighthood even though he was committing atrocities? Really?. It’s only when you go there that you can see the spiritual connection between the land and its people.
The funder of the film Neville Hendricks, who also used to work in the Katie/Peter team, was very passionate about the film, and even though he had advised director Roy to return to the UK when things got hairy he was pleased with the final outcome of the doc ” my take is that none of u would sit on a jury and hear the case just for the prosecution…the Lancaster house agreement was a deal which Britain reneged whilst Mugabe kept his word. What did we expect him to do? This is about right and wrong not black and white. I’d love to see an election in Africa where the west takes its nose out of the trough”
Many audience members spoke up in support of the films version of events and stance, and one lady born in Zimbabwe now a British resident summed it up for many of the Africans present when she stated that the film encompassed a true representation of her feeling of Mugabe being a hero.
A timely reminder of a famous Malcolm X quote ‘’Don’t be in such a hurry to condemn a person because he doesn’t do what you do, or think as you think. There was once a time when you didn’t know what you know today’’.