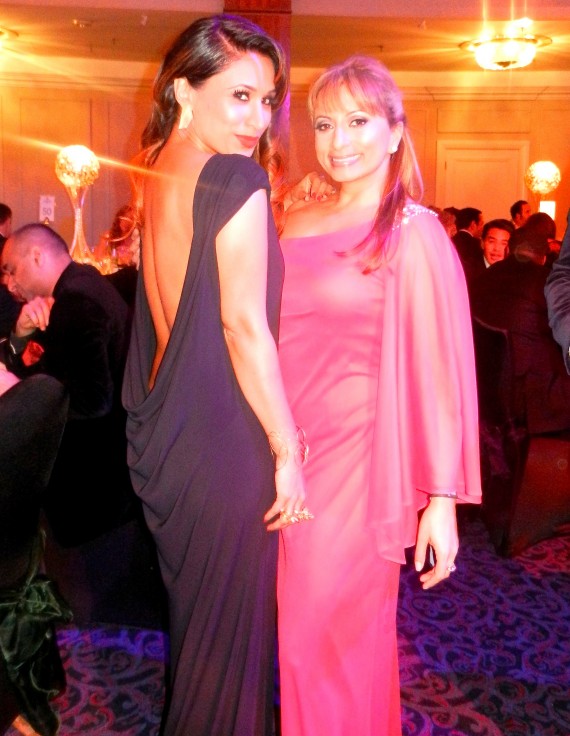 JASMINE WITH PREEYA KALIDAS
A room full of global and political leaders, sporting stars, music legends, business tycoons, Television and film celebrities – it could only be the annual Asian awards!
In its third year, the awards opened out the winners for the first time to include the whole of Asia-not just South Asians as per the first two years. So this year the Grosvenor House hotels Great Room saw a whole realm of Asians from all over Japan, China, India, chorea and the UK attend. 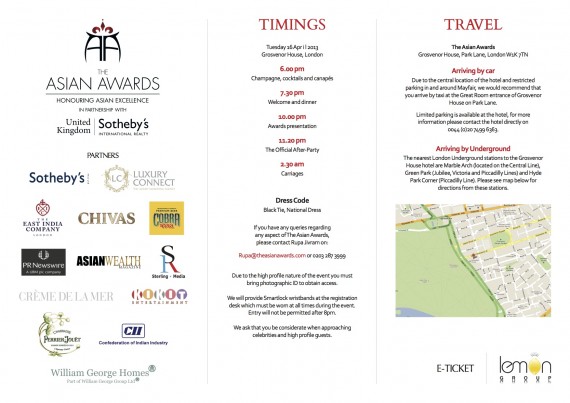 ALL THE INFO YOU NEED ABOUT THE ASIAN AWARDS
‘’These awards were born out of a single vision – to create an event, which would recognize exceptional achievement from those within the global Asian community, on a scale which had never been seen or done before. The Asian awards are about people – about those who stand up for what they believe in and those who step forward to make a difference ‘’- Paul sago Asian awards founder. 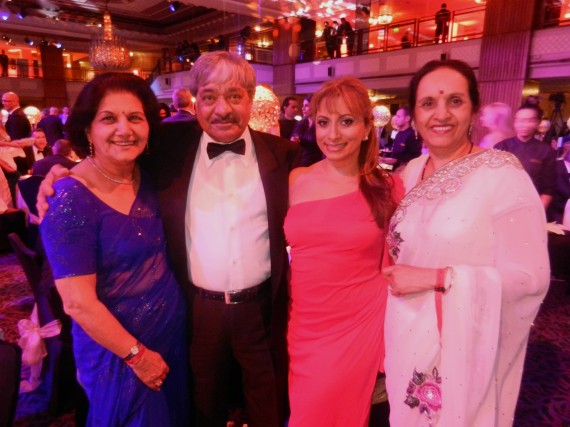 JASMINE WITH ASIAN AWARDS FOUNDER PAUL SAGOO’S PARENTS AND MOTHER=IN-LAW
Paul is a man that started his career under the tutelage of Lord Alan Sugar. A straight speaker and a man most would love to call their boss. Always demanding the very best of his team and himself, he said he founded these awards after attending so many others and being left frustrated ‘’Unanimously the quality of these events wasn’t great, there would always be something; a spelling mistake in the brochure, the microphone wouldn’t work, the screen would disappear, they’d run out of time or the food wouldn’t be great. The second thing was the winners. I’d think ‘’truly why does that person deserve the award?’. We’re always looking to celebrate people who are genuinely outstanding in their field’’. 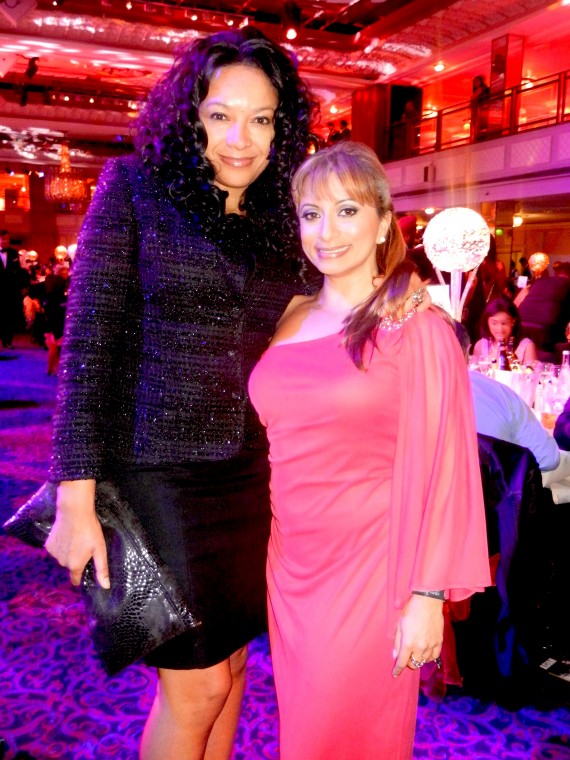 JASMINE WITH MOBO AWARDS FOUNDER KANYA KING AS THE ASIAN AWARDS.
Alongside Sotheby’s, other sponsors of the evening included elite face Cream brand Crème De La Mer, Perrier Jouet Champagne, PR Newswire, the East India Company, Asian Wealth Magazine and Cobra beer.
Sophie Panizzo , the director of UK Sothebys International Realty said ‘’In a period when much in the news is about struggling economies , it becomes ever more important for us to remember that the world is full of amazing people , their achievements and accomplishments a constant reminder of what can be achieved with dedication and determination’’. 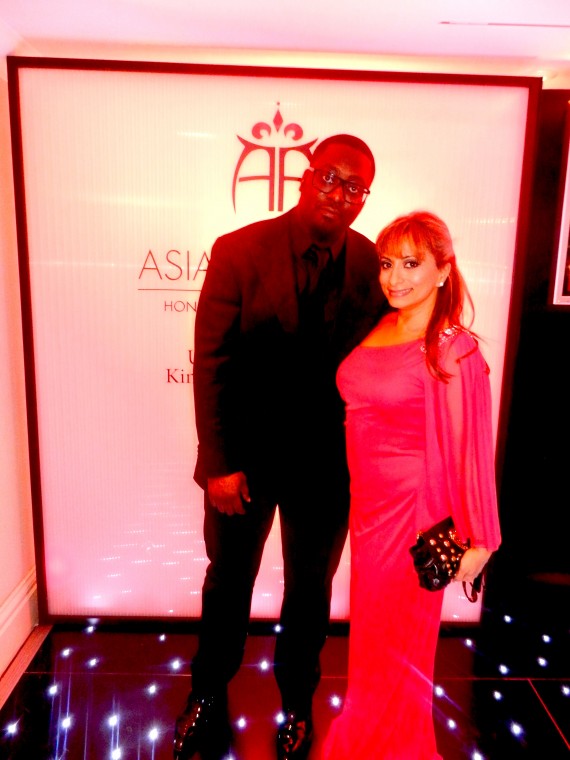 JASMINE WITH SWAY AT THE ASIAN AWARDS.
Hosted by (half Asian) Lord Sebastian Coe, who said he was proud to be hosting the awards for the third year running, Sir Coe’s introduction was funny, engaging and sincere. (In my youth, when he was winning gold medals for this country in the Olympics and European championships, I don’t ever recall the British press mentioning that he was half Indian, with a father from Gurarat?). 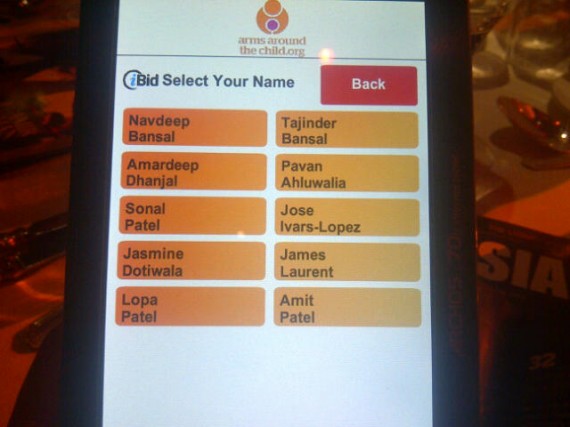 EACH TABLE HELD A MINI TABLET TO BID IN THE SILENT AUCTION-VERY MODERN DAY!
On each table were two mini IPads for guests to bid for the items in the silent auction, which was a very chic and modern tech way of donating some money. A simple tap of a button and I felt good about giving, instead of the usual rigmarole of pens, booklets and filling in bank details! Often when I attending these functions I note that the auctions are very unsuccessful, but here you couldn’t stop the guests bidding!. It was quite exciting to observe the Asian wealthy tycoons all trying to outbid each other for Aston martin days, designer brands, music experiences, bespoke artwork, chef dinner parties, signed sporting paraphernalia from legendary sportsmen, holidays of a lifetime, even drumming lessons with Duran Duran’s Roger Taylor! At one point TV newsreader Tasmin Lucia Khan was onstage, auctioning off herself and other sexy ladies for an evenings dinner, and managed to set Dragons Den judge James Caan and another wealthy tycoon against each other to the audiences delight! 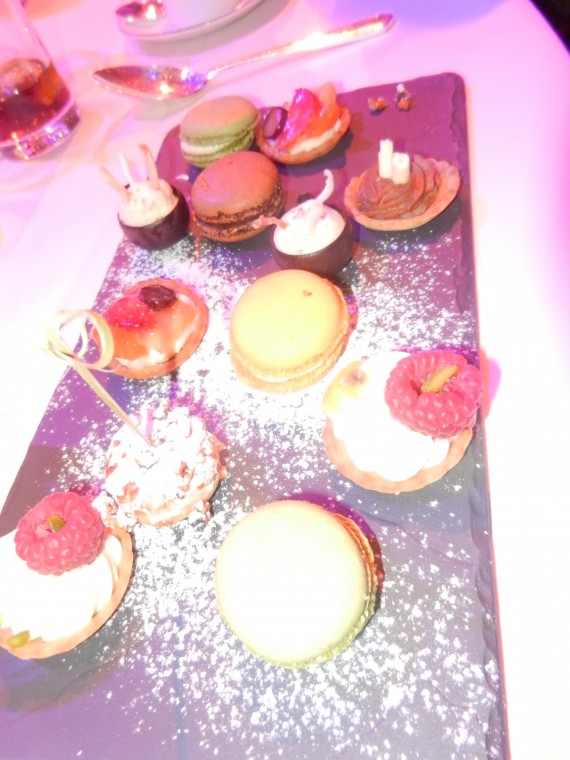 DECADENT MACAROONS ACCOMPANIED BY COFFEE AT THE END OF THE ASIAN AWARDS FEAST!
Food was courtesy of Madhus and was unquestionably the best food I’ve ever tasted or seen presented at an awards show of this caliber. Sea bass with mango salsa wrapped in a banana leaf for starters. A royal thali (silver tray) with chicken, lamb, pomegranate and mint raita with pilau rice main. Finished off with a pistachio and almond mousse cake and masala chai panna cotta. All mouth watering to the palette and the eyes. Even the post dinner coffee arrived not with the usual petit fours truffle chocolates, but decadent flavoured macaroons. Waiters even regularly asked if anyone desired any more. If our over full stomachs could have taken any more we certainly would have. Full marks!
(one man clearly had eaten too much and had ITIS- here he is asleep post dinner -anyone know him?) 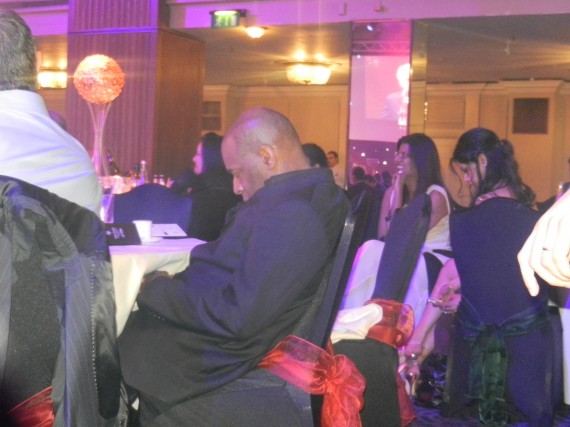 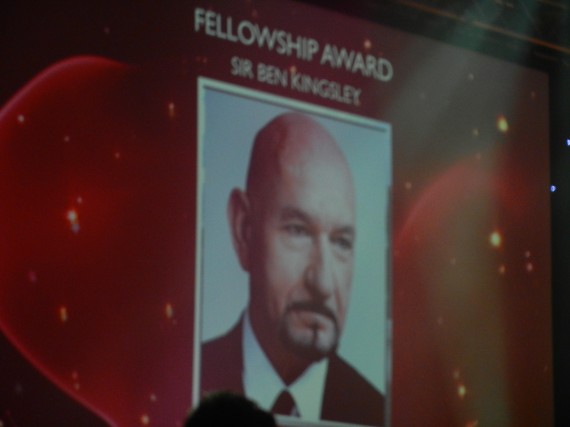 SIR BEN KINGSLEY COLLECTED HIS AWARD WITH A HEARTFELT SPEECH.
Adding a Royal presence to the night’s events, Princess Michael of Kent arrived in elegant fashion in an off white sequined ensemble. Legend Sir Ben Kingsley accepted his fellowship award with a touching speech. 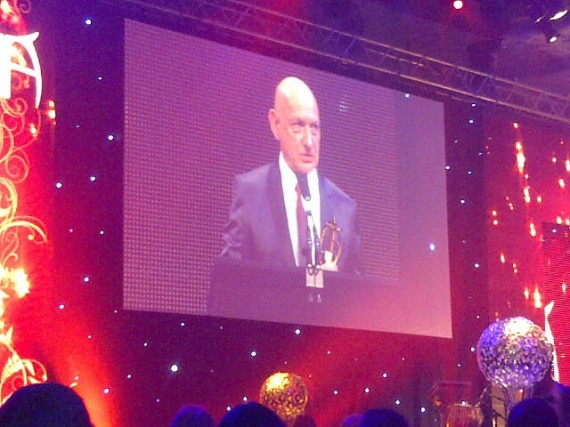 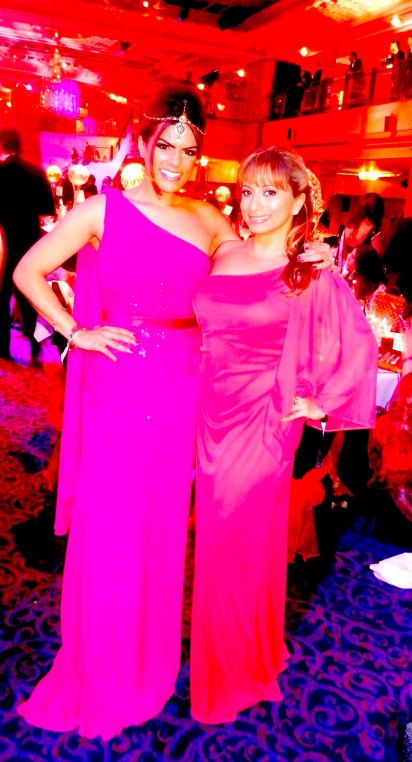 JASMINE WITH KISS100RADIO DJ NEEVE.
KISS100FM’s Dj Neeve was my belle of the ball looking stunning in an Indian princess beehive adorned with an Indian sequined bindi headdress. 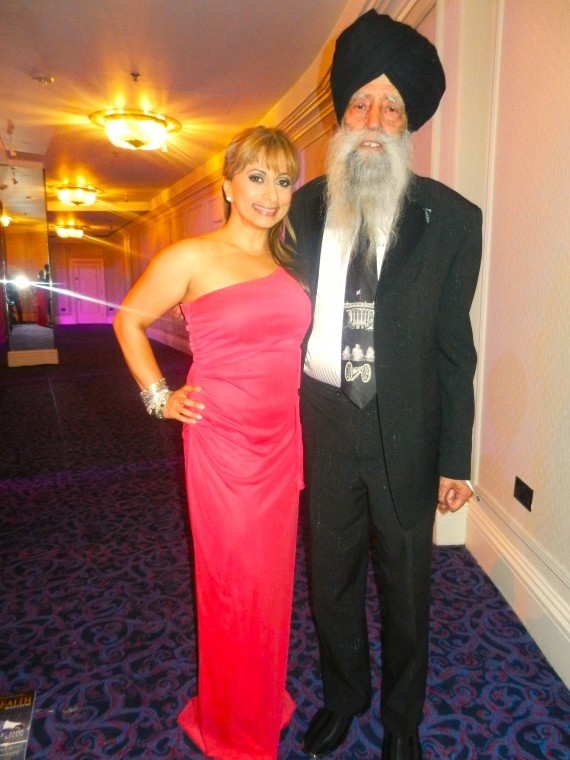 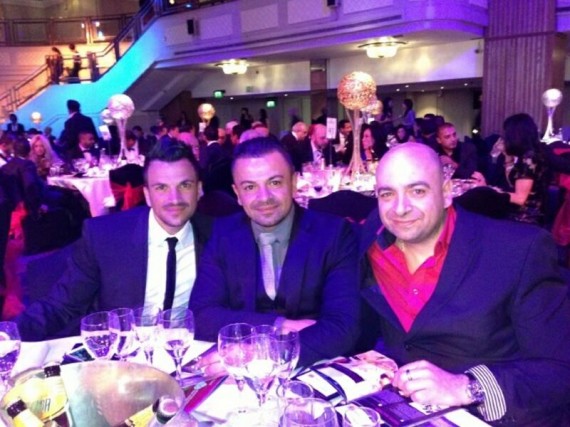 PETER ANDRE HAD A GREAT TIME!
Peter Andre arrived in sunglasses for an evening where he was going to be indoors. Thankfully he took them off when curtseying when introduced to Princess Michael. My mate commented that they couldn’t believe he was now pretending to be Indian so he could enjoy a free meal LOL! Former athlete, now TV sports pundit Colin Jackson looked suave in his suit. Chancellor of the Exchequer George Osborne spoke about the impact of Asians on the financial market globally. Eastenders actress and acting legend Nina Wadia won the bid in the auction for the Aston Martin experience for five thousand pounds and later, on collecting her award for outstanding achievement in television she began in the usual well mannered way but then slightly inebriated yelled ‘’oh fuck it-its about time!’. We cheered!
Radio 1’s hardest working broadcaster Nihal ran in to show his face before escaping to host his evening radio show. 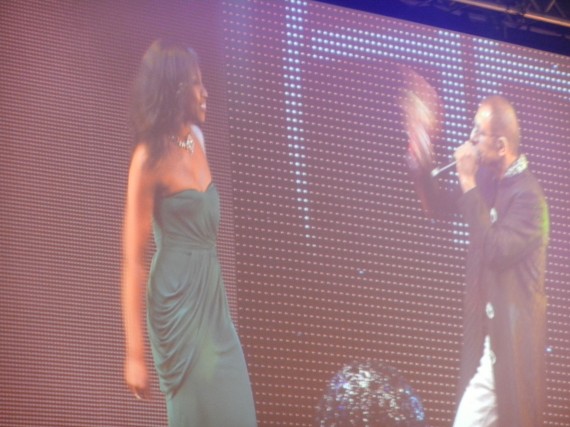 BEVERLEY KNIGHT SANG AT THE ASIAN AWARDS.
Others in the house included singer Beverley Knight who sang mid awards, Gurinder Chadha, Amy’s father Mitch Winehouse, Emma Noble, Elen Rivas and nineties music act Sonique.
A very unique night where British Asians were proud of all the opportunities that this country has offered them, overseen and joined by many multi cultured high influencers and power players from every industry who were happy to unite to celebrate that! .