I’ve known Clifford Joseph Price, aka Goldie, since the eighties, when one of my best friends used to date him. It was around the time that he was selling gold teeth in the UK and USA, and generally hustling hard. 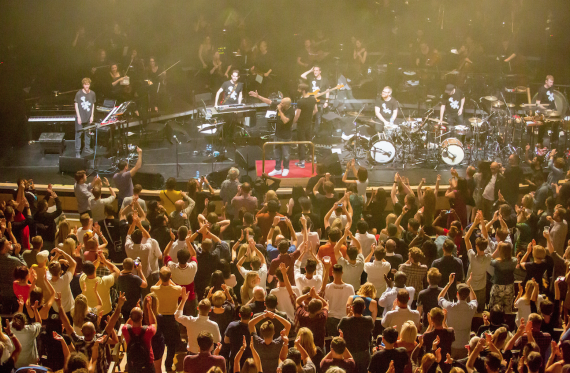 He was always the lovable scallywag. Flitting from the UK to the USA, dabbling in loads of pop culture arts like breakdancing (when he had a head full of ‘’goldielocks’’) and graffiti, dj’ing, making music and more questionable tomfoolery. He’s always had a healthy interest and submersed himself into it all, from holding an exhibition of his own painted artwork a few years ago to dating bad ass women with attitude like Bjork and acting in Guy Ritchie’s Snatch, Eastenders and even playing a baddie in a James Bond movie!

A truly multi-gifted, sometimes troubled, but now most definitely a wiser grown up adult, who enjoys his family, yoga and sushi. The change I’ve witnessed in him across three decades has been panoramic and inspiring.

This week at London’s Royal Festival Hall, the drum and bass icon’s seminal album Timeless, was performed live by the Heritage Orchestra. Godie, in typical lastmin.com fashion called me on the morning of his gig and declared that I must come. On arrival outside the RFH all you could see was a sea of middle aged, trainer-clad, old-skool jungle ravers, all excited about the night. The original eighties children that were a part of the generation that grew up to pop, rock, indie, dance, hip-hop, R&B, dub step, jungle and more. ‘‘The best decade to be born into if you loved music’’ reminisced many people chatting on the night. 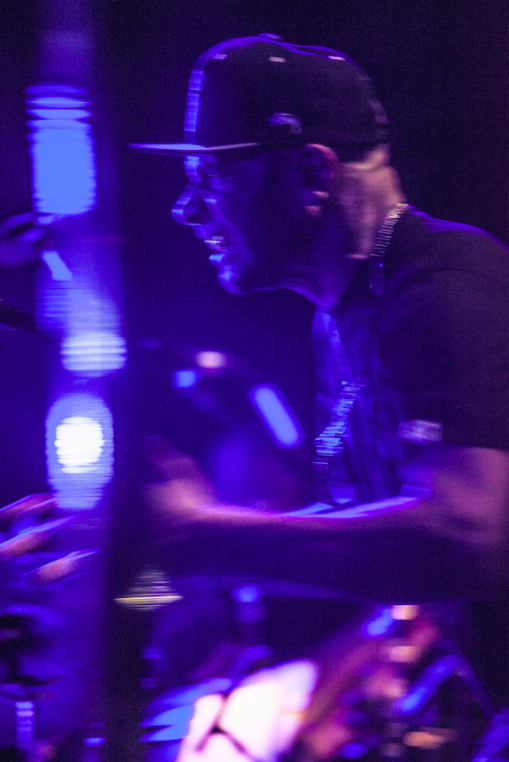 Named by The Guardian as one of the fifty most significant events in the history of dance music, Timeless is a truly landmark album and to hear it brought to life in the Royal Festival Hall was a once in a lifetime moment for drum and bass fans. Way back in 1995 NME in its Albums of the Year feature said Timeless was ‘…an astonishing… symphony of whizzing breakbeats, fluid soundscapes and mind-warping moodswings…’

Picking up my tickets from the box office i noted Goldie had arranged a box for my friends and I. Before we could even jump up and down in excitement a roar of ”Jasmine!” thundered behind us as Goldie greeted us in his OTT dynamic manner musch to a very packed foyers amusement. 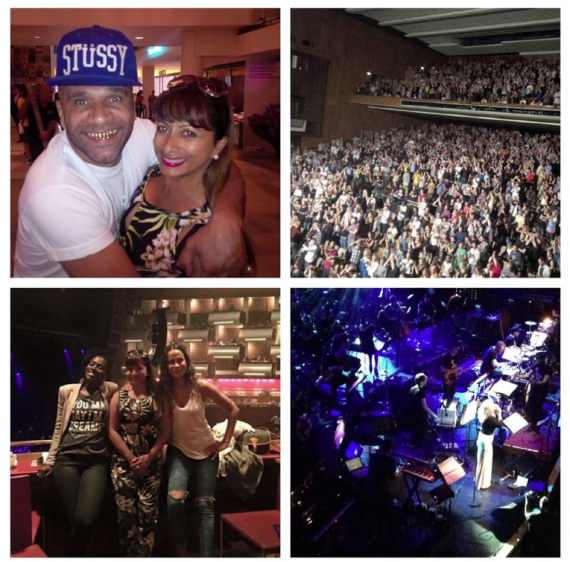 Returning after a sell-out show at James Lavelle’s Meltdown last year, Goldie was back (after his own personal adventures in Thailand), to introduce The Heritage Orchestra, who performed his most celebrated album, live. Conducted by Jules Buckley, Goldie and the Heritage Orchestra had expanded and reworked the tracks for full orchestra, band, choir, electronics, and guest vocalists and the final result was mind-blowing!

Seeing the album translated from vinyl to 3D orchestra was magical. Jules lead the conducting onstage whilst Goldie leapt about from the stage to the audience like a mad music scientist.

The Timeless album originally fused the breakbeats and basslines common in jungle, with orchestral textures and soul vocals by Diana Charlegmagne. The album’s title track was a 21-minute symphonic piece. Timeless also helped popularise drum and bass as a form of musical expression. The song “Inner City Life” was probably it’s biggest commercial hit in the UK charts at the time.

Years ago it was the Bluenote club that jungle music fans packed, tonight it was the revered Royal Festival Hall, usually a place for more sedate, demur audiences. I am certain this building had never seen thousands of middle aged ravers, jumping around for two solid hours in the stalls, circle, aisles and royal boxes in this crazed manner. 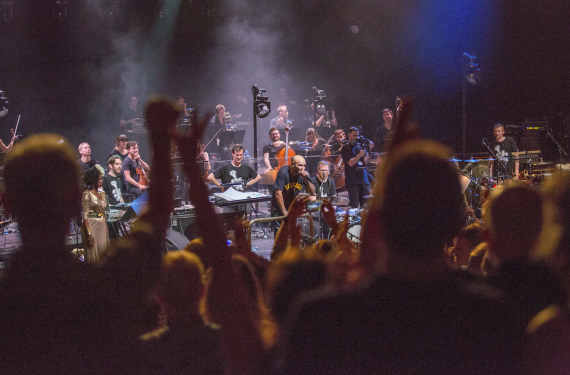 The hall was packed with an audience cheering screaming from the start of the first notes of the album played by the orchestra. There were line-ups of singers, strings, horns and percussion onstage and the atmosphere was electric with anticipation.

There was a nice slow build up with smooth strings for Sea Of Tears, before the drummer (Adam Betts), manically burst into drum and bass beats, which he continued to beat like a man possessed for the next two hours! Actually, the drummer astounded us. If you imagine a whole album made up of drumming, even with this 50-piece orchestra it was this lone, sweat-soaked drummer that was punching well above his weight. He must’ve been knackered and lost at least stone right there on stage, with his frenzy of beating those skins solidly for so long. 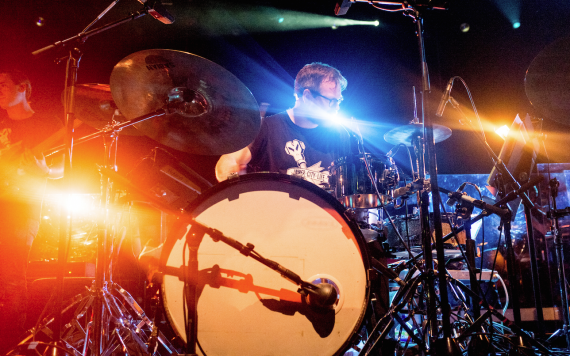 As well as the drummer, the pianist was letting loose too, one moment as if he were in a rave dancing frenzy, and then the next minute he would suddenly be sat upright and composed, ready to play his section. The orchestra couldn’t stay still either and were bouncing throughout; and even conductor Jules was hopping about the beats were so infectious. Just. So. Cool. Highlight tracks for me included ‘Saint Angel’, ‘A Sense of Rage’, ‘Angel’ and ‘State of Mind’.

Goldie spoke to us a couple of tracks into the set

‘’two decades ago I wanted to create something timeless,… All my experiences were put into this project. I had a misspent youth so with this new project I put all of that into something new… We are a family, UK culture, UK jungle music (mass screams and cheers), We were on the cusp of the analogue and digital change which is all being celebrated now…. Now it’s the rebirth for me from flat sheet music to 3D music orchestra! …An old man in New York once said to me ‘’don’t wish too hard kid, it might come true’ and it has!’’ 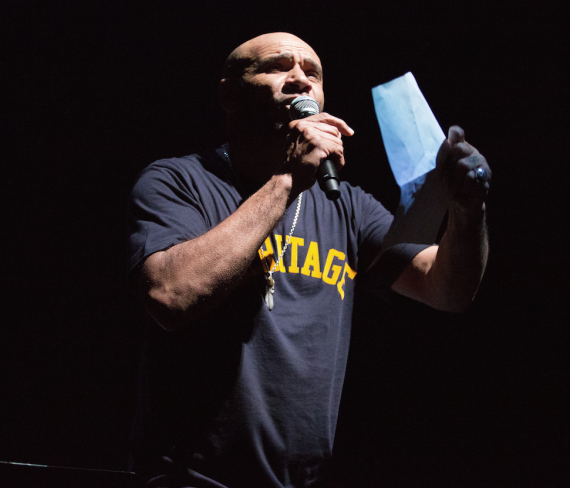 It was all fascinating art in motion. The laser lights were choreographed to dance with the music, and the audience was bouncing as the lasers swam across them. Audience members were leaping in their seats in the stalls, boxes and circle balcony. ‎ 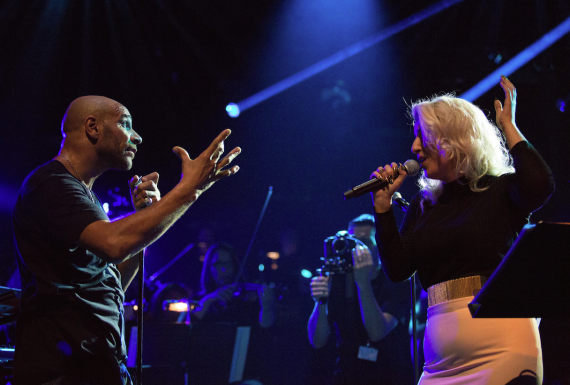 As Pied Piper Goldie led the dance and passed by audience members and musicians, they’d all whip into an even more intense frenzy! What an incredible feeling to see and hear the work that you made two decades ago, resurrected like a great phoenix from the flames, in front of its original fan base.
The nights were produced by Goldie, Chris Wheeler and Southbank Centre and the arrangements were by Matt Calvert, Jules Buckley, Tom Trapp, Ben Cottrell, Matt Dunkley and Simon Whiteside. 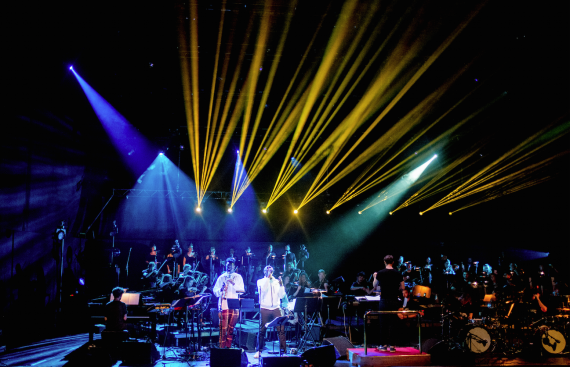 ‎Afterwards I caught up with Goldie backstage where he told me the concept of these 20year shows and how it all came about logistically.

Goldie; Knowing how far ahead the concept of the music and album was, I always wanted this project to be seen in this light, so the concept was always there- I want to stretch the boundaries of what you can do with drum n bass, so we move the music forward, creatively not commercially. The logistics are really a lot of back n forth with the Heritage orchestra in coming up with the tracks in notated and playable form.

Jasmine – What sparked your passion for orchestras in recent years?
Goldie; I’ve always been a fan of classical music and I really like a challenge so when I see a new area to expand into I go head first into it

Jasmine – Jules Buckley’s a bit of a classics star himself. Tell me about working with him.
Goldie; He is a genius to work with, as is Chris Wheeler, the fact that they can interpret the music which is so dense takes a lot- the project would not have happened without them.

Jasmine – How much more can you milk your art from two decades ago? Any new concepts on the horizon?
Goldie; Well, the live project is a completely new interpretation of the album. So we’re showing it in a new light, we’re expanding it. In the back of my mind I always knew it could be played in this way but technology and belief needed to catch up with the concept.

Jasmine – Talk about that fan base that was dancing in a frenzy. What kind of feedback have you had from them.
Goldie; It’s been overwhelming, the replies via social media and everyone coming up to me at the shows has been amazing. I don’t think the Southbank has seen reaction within its walls like that before. The emotion and the power of the sound really caught people. It was great to see.

Jasmine – How has the character Goldie changed from his place in the world from 20 years ago?
Goldie; I’m a lot more focused and I have a better understanding of myself. I’m still fighting for what I believe in but I’m also much more intelligent about how I go about this fight to achieve the best results. The love of my family coupled with Bikram yoga has lead to an inner calm that has created this focus, the life of an artist will always be a troubled one but there are things you can do to make your passage slightly smoother.

Being put up for adoption and being raised in a variety of childcare homes and foster parents hasn’t held this over achiever back. He cites his own biggest achievement in life so far as

‘’ Being voted by the public into the Top 60 of the ‘New Elizabethans’; the most influential leading figures in HM Queen Elizabeth II’s reign, with people including David Attenborough, Margaret Thatcher and Sir Edmund Hillary. Also, my degrees and honours; an honorary degree with Brunel University; a Doctor of Social Sciences at Brunel, West London / a Doctor of Design Degree from the University of Wolverhampton as well as being a professor at Thames Valley University!’’.

Tonight’s iconic performance of urban meets classical music is just another string to his very over flowing bow.