LATE AT THE TATE 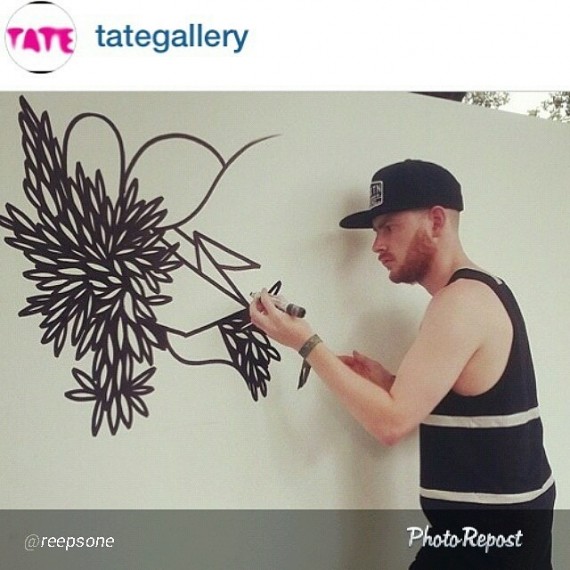 There’s been a real push into diversifying every area of our London Lives this year, from conferences and seminars on the subject, within industries as far and wide as the police force, the music industry, television and beyond.

Late at the Tate is a bi-monthly event with an aim of diversifying its clientele, and I love it as it gives me a chance to explore art after hours, in a very relaxed way. It’s another free-for-all evening; where organisers bring together the worlds of visual art and spoken art, for a huge number of young hip hop fans. Late at Tate is a programme of events for young and diverse audiences held at Tate Britain on a bi-monthly basis featuring music, film, fashion and live performance.
Last time it was one single event in the Turner Room, which was so full and crowded that people had to experience it from outside, so this time around they had numerous stunts all across the art gallery at different times.

Outside the front entrance were hip-hop ciphers where Hip-hop connoisseur DJ Snuff was seen and heard to be throwing down some stark beats for the various MC’S- both male and female- who were reciting some really authentic eighties sounding verses. Live music in this garden also saw an eclectic mix of artists like emerging Jazz outfit Parshmaune and international Hip-hop collective End Of The Weak who have teamed up with London-based MC cypher event Higher Learning to showcase a selection of high quality wordsmiths.

Inside the white imposing building, both visual artists and spoken word talent were doing their thing in various rooms around the gallery. The great thing was nothing really clashed and you were able to calmly wonder from one moment to the next. 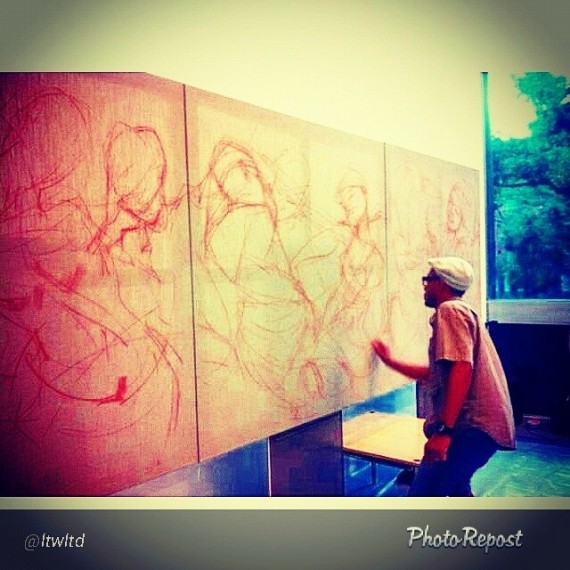 The night was called Spaces Between – a celebration of youth culture through word and sound, and featured some of the UK’s leading and emerging storytellers and musicians, inspired by the artwork in the Tate Collection. Spaces Between explored the individual voice and its transformation and influence on youth culture using various spaces throughout Tate Britain to show how it exists between social structures and cultural boundaries.

Other highlights on the evening included a spoken word showcase within the grand spaces of the Duveen Galleries inspired by this year’s Tate Britain Commission sculptor Phyllida Barlow; a workshop with UK beatbox champion Reeps One in the Manton foyer; an acoustic performance by hotly-tipped rapper Little Simz against a backdrop of stunning portraits from the Tate Collection and live painting by leading British graffiti artist Mode 2 in the Clore Studio. 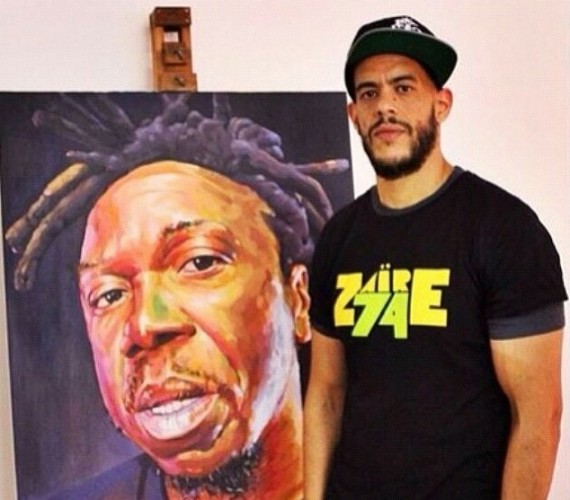 Artist Benjamin Wachenje poses with his portrait of Jonzi D.

A huge piece of artwork from artist Benjamin Wachenje, was unveiled and the crowd were delighted to see that it was a portrait Hip-hop choreographer and cultural icon Jonzi D. Benjamin said he’d admired Jonzi for two decades and he respected the fact that Jonzi rapped in a British accent not an American one. They proceeded to discuss arts and the community for an enraptured crowd that had gathered to hear them speak and were delighted that Jonzi was delighted that he was ‘’Hung at the Tate’’. Benjamin said

‘’I wanted to get to know all these rappers in the UK so I thought what better way to get close to them – it would be a great idea to paint them, of all the rappers portraits I’ve painted the two people I’ve painted most often are Jonzi D and Ty. Recently Jonzi D rejected his MBE but I think the best way I have been able to recognise him is by painting him and this now being hung at The Tate’’.

“These events are now led by the Young People’s Programme with the aim of giving young people a genuine voice in the gallery. So it’s really great to be working with Louder Than Words with their commitment and in-depth experience of working within the youth cultural sector.”

One of the highlights for me was of relatively new act Little Simz, who started making her music when she was nine years old, inspired by fellow female MC Missy Elliott and Busta Rhymes. Clearly also influenced by acts like Lauryn Hill and Jill Scott, Lil Simz performed a live acoustic performance, against the backdrop of stunning portraits from the Tate Collection to a very enthusiastic crowd. 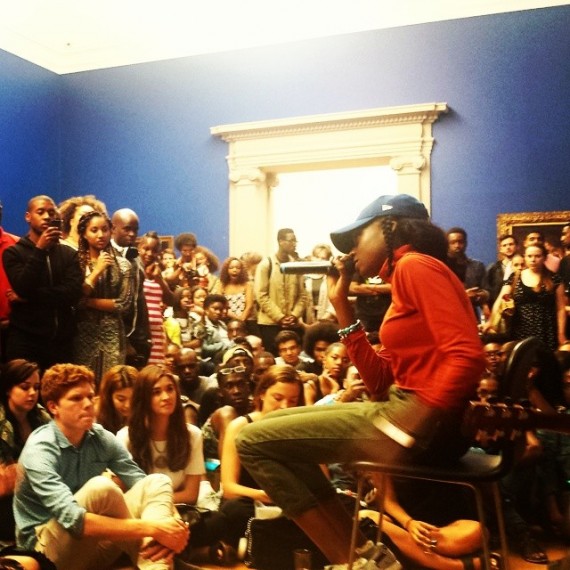 The next one, should you wish to please your eyes and ears simultaneously is on Friday 3 October 2014, 18.00 – 22.00. Bring no airs and graces, just an open mind to explore new things and meet new like-minded people with a passion for creative arts and a zealous joy for life. 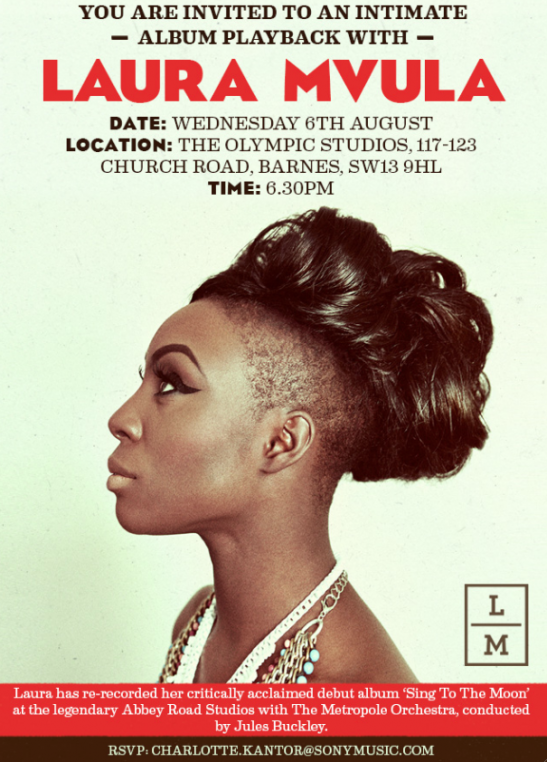 Next the incomparable Laura Mvula hosted an intimate album playback listening session for her remake of her debut album ‘’sing to the moon’’. Laura has rerecorded her critically acclaimed debut album at the Abbey Road Studios with the Metropole Orchestra, conducted by Jules Buckley.

The session was held at the plush Olympic Studios in Barnes, west London where crew, tour team, family, friends, music media and press were gathered for the aural treat. Sat in regal red velvet seats in their screening room we were treated to mini fish & chips, cupcakes and drinks and encouraged to settle back and take in the hauntingly dulcet tones of Ms Mvula. 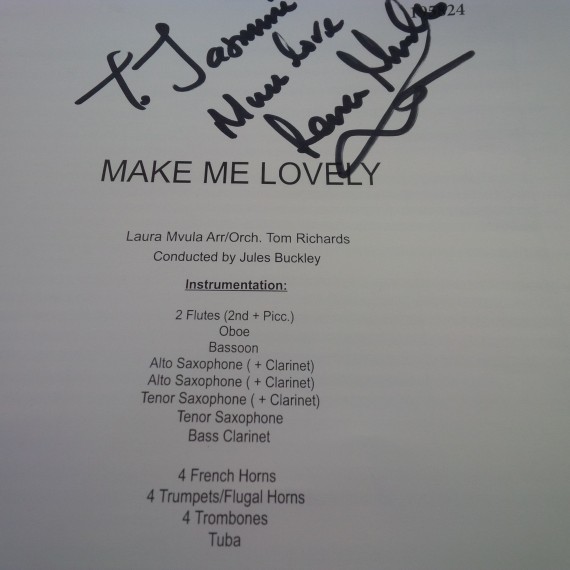 Each seat also had a beautifully printed out keepsake sheet of her music which was a very elegant touch. (I will file mine away with my hoard of music star memoribilia for my future charity sale lol!). The session began with a short 6 minute screening of the making of the album with Laura, Jules and others talking us through the experience. Then we sat back and allowed ourselves to be carried away on a musical journey as the room dimmed and quietened.

Laura comes from ”good stock” with a very strong team behind her. Her manager Kwame Kwaten has been managing and making stars out of unknowns for years. A well focused team that see’s the long road is incredibly important in this music game. Surrounding yourself with ”yes people” aka enablers who make their cash off you and scarper can lead to quick fame, quick kick to the kerb! 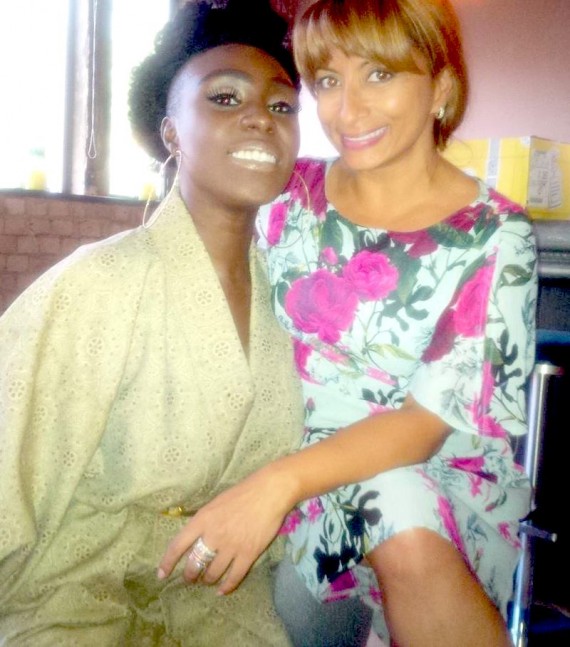 JASMINE WITH LAURA POST LISTEN OF HER AMAZING NEW REMAKE OF ”SING TO THE MOON” AT OLYMPIC STUDIOS.

Afterwards we went to catch up with Laura as she signed our music song sheets, which she had kindly placed on all her guests’ seats. It turns out the reason that the album was remade was as in 2013, following the release of her first album, Laura was asked to perform at the BBC prom. When she had originally written the songs in her bedroom Laura had imagined them with an orchestra and conductor Jules Buckley did such an incredible job that the urban prom was a huge success. Of course the next logical step was that plans came together for an orchestral version of the full album and as now Jules had moved and was the helm of the Metropole Orkest, the worlds leading pop and jazz orchestra, it was a no brainer to collaborate again.

The playback was a huge success and the audience left on a high. Laura really has an extremely unique voice and style and if you’d like to catch her live, then pencil Tuesday 19 August 2014, at 10:15PM at the Royal Albert Hall for a Late Night Prom in your diary, to see what all the well deserved fuss is all about.