NAO- AT THE BRITS 2017 LAUNCH.
All images courtesy – John Marshall.

So this time last year, there was uproar on both sides of the pond when the #oscarssowhite and #britssowhite tweets were bouncing across the globe demanding more diversity and an equal playing field for everyone.
Very quickly both brands responded by re-hauling their voting academies, and whilst there was much cynicism on the part of the public, music and film industries and indeed the new panelists themselves, this week, within just a few months, it was proven to have worked.

In one of the most clear and powerful case studies to date about how diversity strategies work, the UK’s BRIT Awards (British Record Industry Trust), which is the biggest music show from the UK that airs globally, has stepped up to the plate, acknowledged its short-comings and made positive change.

A few months ago myself and many other names like singer Lily Allen and grime star Stormzy, joined in the heated debate as to why the BRITs never seemed to acknowledge the British black music acts that came from rap and grime backgrounds. One famous female black music act was run into the ground on social media for her colour blind comments which suggested that there was no problem.

In a few months the umbrella brand that runs The Brit Awards – The BPI – has removed around a third of the more stalwart voters on the academy who were no longer involved in the UK music industry, and added a fresh line up of younger, more female and more voters from ethnic backgrounds (including me- I ticked every box!) that were more representative overall of the UK’s make up, leading to a totally different type of line up of star name nominees acknowledged this year. 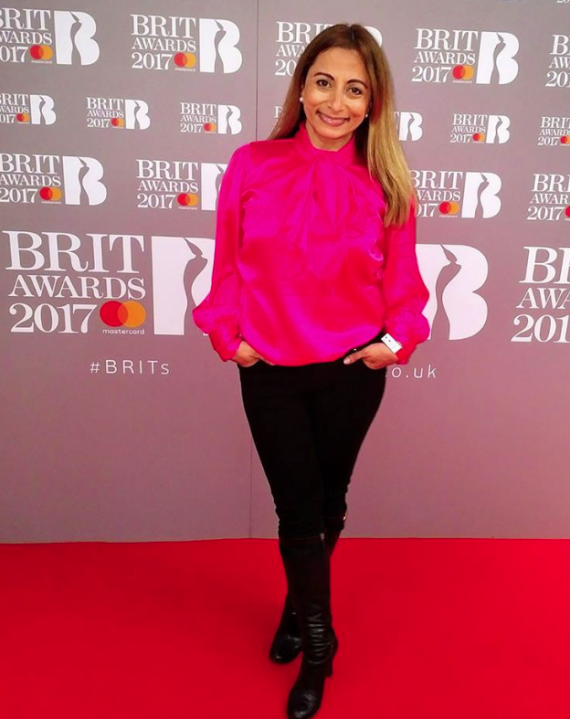 This weekend, the BRIT Awards revealed in a live show televised across the UK on ITV, its 2017 nominees and boy was it a revelation! The nominee make-up was totally different to previous years where we were more used to, erm, a certain type of act from a very specific background getting a nod of honour.

Following these changes, there are over 20 nominations for BAME artists at this year’s awards. BAME names like Craig David, Kano, Michael Kiwanuka and Skepta have all been nominated for the best British male category alongside David Bowie whilst Nao, Emile Sande and Lianne La Havas are nominated for best British female, while Stormzy who called the awards “embarrassing” last year for ignoring grime artists, has been shortlisted for best British breakthrough. A big difference.


MICAHEL KIWANUKA AT THE BRITS 2017 LAUNCH.

This year one of grime music’s biggest names – Skepta – is a leading name with three nominations. This, after years of most UK black music acts as well as the grime music genre being totally over-looked. Skepta shares this top-billing with the UK’s biggest girl band, pop starlets, Little Mix who also lead with three. The band will also perform at this year’s ceremony as well as The 1975 and Emeli Sandé.

Skepta’s three nominations are for British Male Solo Artist, British Breakthrough Act and Mastercard British Album of the Year for the critically acclaimed album ‘Konnichiwa’. His first ever BRIT Award nominations follow a phenomenal year including his highest ever chart success.

The journalist’s cliché ‘’only time will tell’’ applies here if you’re wondering whether Skepta will be Craig David-ed. Yes I did just use Craig David as a verb here. In the last 16 years poor Craig has been nominated for a grand total of 16 BRIT Awards and won….none. In the launch show this weekend just gone Craig performed alongside his peers Christine and the Queens, Calum Scott and Critics’ Choice Winner Rag’n’Bone Man.

One winner from this years show has already been announced. Brits Critics Choice winner is Rag’n’ Bone Man (Rory Graham). Before being lauded as a singer / songwriter, Rory was actually a drum n bass MC from the jungle and pirate radio scene and also worked as a carer before eventually getting into the blues. He is refreshingly un pop star-like with his very dad-like physique and image.

Two nominations each go to The 1975, Kano, Michael Kiwanuka, Calvin Harris, James Arthur, Clean Bandit, Jonas Blue, Tinie Tempah and Coldplay and amazingly, Sisters Beyoncé and Solange go head to head in the International Female Solo Artist category. See, when you include younger, more connected, streaming, engaged music lovers who are much more in tune with the population’s tastes you are left with a vastly different final result. The bottom line here is that small steps count and even if these more ‘diverse’ acts don’t win thats no problem, at least they are finally being recognized.


SINGER ANNE-MARIE AT THE BRITS 2017 LAUNCH.

Its not just the nominations that reflect a forward looking brand. The BRITs are also acknowledging the digital world domination, by naming not the usual FM radio stations of yesterday as media partners, but Apple Music as the official music streaming and download partner for this years event.

BRITs Chairman Jason Iley (who must’ve been relived that all was finally well and healthy with his brand) gushed: “The 2017 BRIT nominations reflect a diverse and rich year in music both in the UK and internationally. Huge artists from the past, present and future are represented. From pop, to indie, to grime, to rock; it’s a brilliant and varied roll call of talent – a fantastic showcase for what’s happening in music right now.”

A few years ago we would’ve moaned and complained behind closed doors about the lack of diversity at brands and known that nothing would change. However the Internet and social media has turned that notion on its head. People powered change is a thing. In a few moments a hash tag can spread around the world and we have the Internet to thank for making our universe a smaller, more connected planet. One small step at a time, we can change things to be equal for us all.

As my fellow Capricorn King Martin Luther King said ‘’commit yourself to the noble struggle for equal rights. You will make a greater person of yourself, a greater nation of your country, and a finer world to live in’’.

About BRIT – British Record Industry Trust
It’s important to understand how these brands and voting academies work. The BRIT (British Record Industry Trust) Awards are organised by the BPI – the record labels’ association that promotes British music. The BPI’s membership is made up of over 370 independent labels as well as the UK’s three major record companies – collectively they account for over 80 per cent of the music consumed in the UK and around one in six of all the artist albums sold around the world. 2017 will celebrate the Awards 37th show since its debut year in 1977 (which was followed by a short break of a couple of years).

The BRIT Awards have established themselves as a global music institution that annually celebrates UK chart and commercial successes. Last year (2016) The BRITs celebrated an incredible night in British music with Adele picking up four Awards as well as giving a show stopping performance.

Over 8,000 young people have been given free education and the opportunity to enter the BRIT School since its opening in 1991 and more than 10,000 children and adults have been helped by the extraordinary music therapy work carried out by Nordoff-Robbins.

The BRIT Awards 2017 with Mastercard will exclusively broadcast live on ITV – on Wednesday 22nd February 2017 from The O2 Arena, London