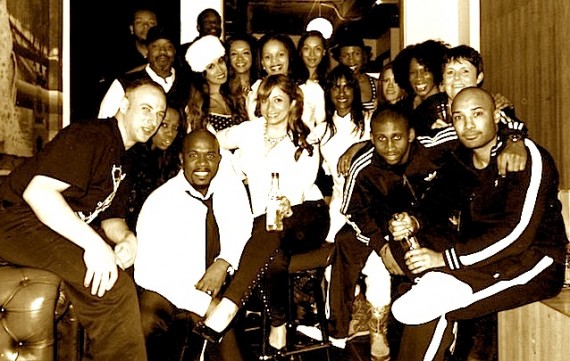 JASMINE’S BIRTHDAY KARAOKE. Friends including MOBO CEO Kanya King, Trident Police’ Claudia Webbe, PR MAVEN Jessica Huie, music scene photographer to the stars Paul H, actress/singer Preeya Kalidas, record label boys JP and Trenton and more.
Every year the pressure heightens to outdo my last birthday adventures. You know I lived the YOLO brand way before Drake had teenage northern kids yelling about it in Magaluf!
Previous years have seen me celebrate many of my born days in new york, los Angeles, on a boat, in a plane, having my notorious underwear and pyjama parties in the 90’s, to Motown themed and old skool hip-hop themed parties, to dinner in the private dining rooms at The Ivy and Chiswick House in most recent years. My birthdays actually in January but many think its in February, April or may as I always have a smaller gathering of close friends in January and then another big party later in the year. Why not? I take my cue from her majesty the queen who has a public and private birthday. It’s a great way to extend your celebration for 6 months of the year. 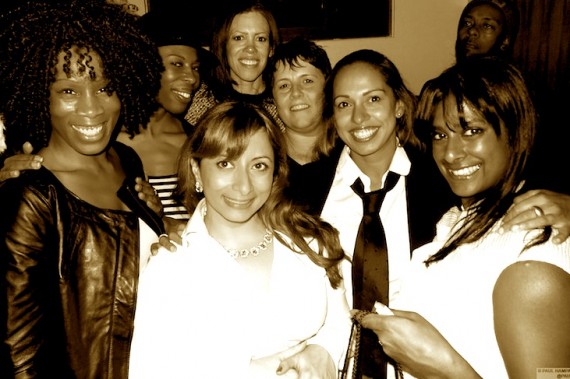 JASMINE WITH HER GIRLS L-R, MARCIA, MONIQUE, ANNELIESE, ANITA, HEATHER AND CLARE.
This year I couldn’t bear the thought of yet more food and dinner after so many holiday seasonal dinners at Christmas, which was just a fortnight ago so I decided we needed to do something different. I told my nearest and dearest to come and join me for a karaoke evening at Bloomsbury bowl where we had the private jumbo-sized room to ourselves.
The dress code was black and white for artistic reasons. The night began at the nice and early time of 6pm. with so many friends in the music industry-many of them DJ’s- one has to often juggle times so everyone can be included. By 6.30pm the room was already half full and both ChoiceFMs best DJ- Manny Norte (rocking a black and white Ali tee) and actress/singer Preeya Kalidas (rolling in a Russian glam hat!) were rocking the mic to our delight! 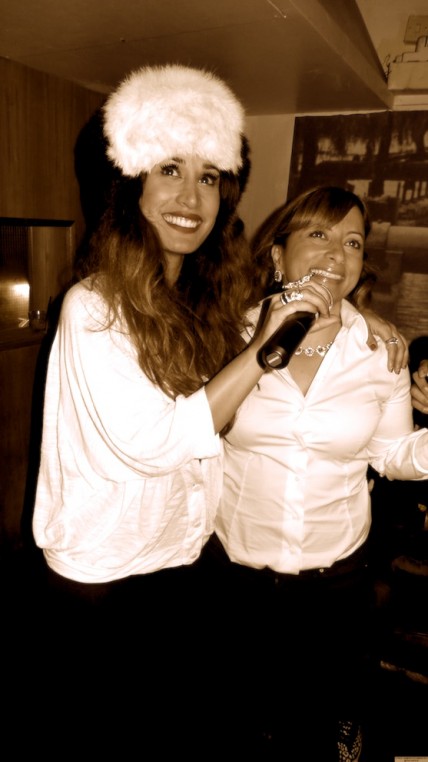 JASMINE GETS SINGING LESSONS FROM ACTRESS/SINGER PREEYA KALIDAS
My mate Oliver made a very handsome Frank Sinatra and as he chose great track after track we got into our best musical theatre vibe.
Manny also played conductor and mystro as we did our best renditions of john Travolta and Olivia Newton John in ‘’Summer loving’’ (at that point al the Bloomsbury Bowl customers crowded at the see through glass window to peer at us do our thing so loud were we!)
Everyone got all church and gospel when ‘Like a prayer’’ was on, and then a little x rated when Biggie Smalls remix of Nasty Girl cam on. (These music industry folk can be just as vulgar and outrageous as the acts they represent!)
There were only 2 mics but that didn’t stop all of us just joining in and singing along to every song that played. My girl friends Monique and Heather were wilding out to everything! New Scotland Yard’s Trident Police’s Claudia Webbe was brilliant dueting with Preeya on Lauryn Hills killing me softly. Preeya’s dulcet tones were singing away whilst Claudia did the straight mic man ad libs-it was hilarious! Preeya ‘’ Strumming my pain with his fingers’’, Claudia ‘’yes his fingers!’’ MOBO CEO Kanya King looked gorgeous in her movie star black frock and hair did! She was shy about taking the mic but you know me, I thrust it at her so we all had a great trio going in Salt and Pepa’s ‘push it’. 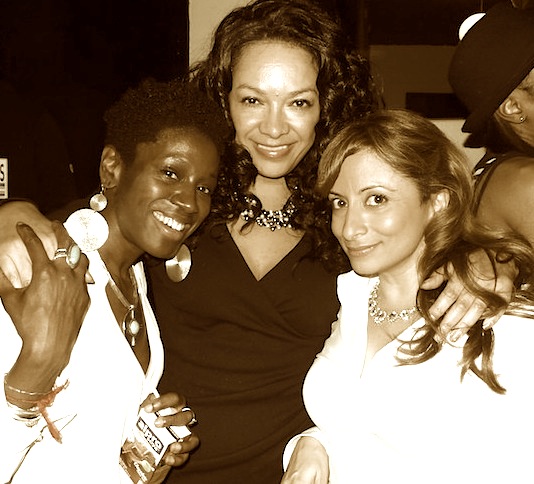 JASMINE WITH THE BBC’S JAY DAVIDSON AND MOBO’S KANYA KING
All the guys had fun with the rap songs especially Jay Z and Kanye’s verses. Photographer to the UK music world Paul H and Manny Norte did a great set of very manly hip-hop tracks; they also rode madness ‘’Baggy Trousers’’ word for word. Former MC now music manager JP was under pressure but did Jigga more than enough justice, Someone mentioned that they ‘’rode that track like Dizzee and Wiley’’ at which there was much hilarity!
Legendary cookie crewmember Cookie had us rocking as did PR glam chic Jessica Huie. BBC marketing maven Jay Davidson was jumping around to cypress hills jump around. My mate Marcia looks the spitting image of a young Whitney Houston so of course she belted out Whitney classics (see if you can spot her in the group photo!), whilst her husband Fabien came in black and white chef garms so we referred to him as Raekwon the Chef all night.
Amy Winehouse management team member Trenton did Amy proud with his rendition of her classic hits (even though he did have to look at the words- why weren’t they imprinted on his brain already? LOL). My oldest best mate Anita who’s known me since I was a cocky, prissy 10 year old princess did her best to keep me in non tipsy order, my old ballet school pal Clare knocked out a few old skool dace moves. My close friend, new Yorker, former Def Jam, V2 Music, music manager Anneliese screamed her lungs out on Estelle’s American boy-it’s the American in her.
Then Marvin Gayes sexual healing took the party in another direction as my homie Troy broke into a duet with Jay-wild!
There was a particularly poignant moment near the end. My surrogate big brother Richard Pascoe was in hospital but he has never missed any of my birthdays in the past 2 decades. My other half dialled him up on facetime on his IPad screen, and there from his bed was Richie wearing a black and white outfit, eating chicken and red velvet cake and singing along with us. The whole room then broke into Queens Bohemian Rhapsody in his honour as we all screamed our lungs out. 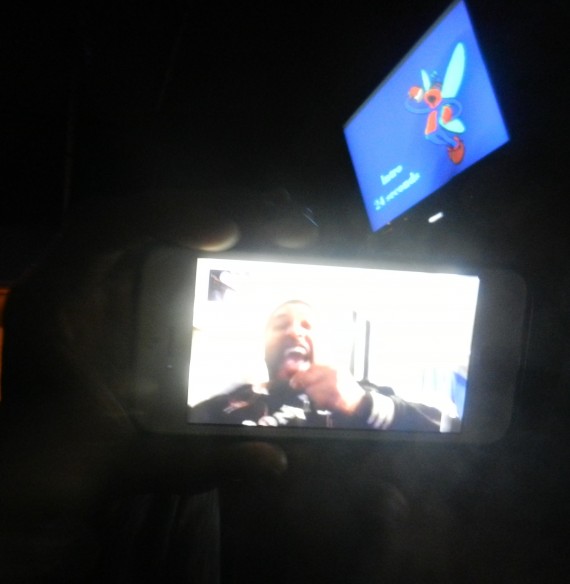 TALENT MANAGER RICHIE PASCOE JOING THE PARTY VIA FACETIME FROM HIS HOSPITAL BED WEARING THE REQUIRED BLACK AND WHITE AND SINGING ALONGSIDE US!
A great moment. A great night. A great set of people! 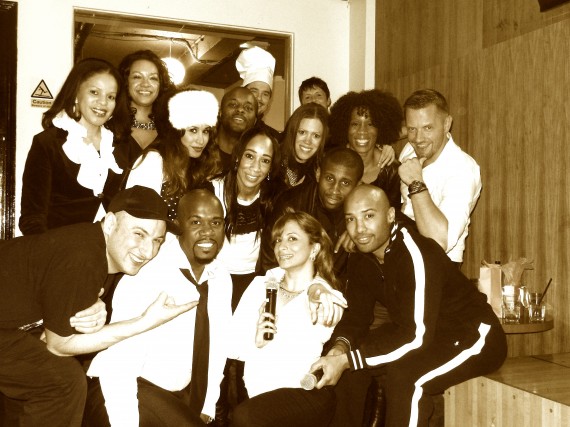