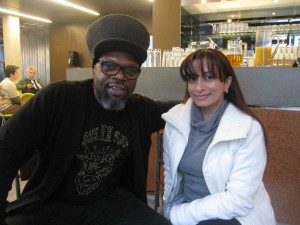 London’s a great city for diversity, a multitude of activities and people. This past week was a particularly typical crazy week in London town.
Firstly I was persuaded by a new friend to join him at a Book slam at Shoreditch Town Hall where poets and MC’s did their thing .it felt a scene from ‘’Love Jones’’ the UK version.
Then there was a very untypical Dotiwala social night where the legend that is Jazzie B invited me to see him, and his mate Goldie sound clash at Camden Round House where Trojan sound system and Roots Manuva were doing their thing too. A big night!
Next it was the Adidas pre Brit award party at bunglow 8 before the big night of the annual Brit Awards where we loved the Warner Music after party and the Armand de Brignac Jay Z party-(more on that next time),then I Saw Bashys new film ‘Shanked’-again!
Then I was asked to pop up to the Red Bull Music Academy in London Bridge to meet SoulIISouls front man-Mr Jazzie B.

Jazzie B has an aura that surrounds him.
You hear his big booming distinctive bass heavy voice before you see him.
Even if u couldn’t see his face his silhouette is so distinctive its a brand logo in itself. Years ahead of Jay Z, Jazzie is always head to toe “all black everything’. Big leather coat and pill box peaked cap are on, even indoors.
In fact-i don’t think I’ve ever seen him without these 2 Jazzie staples. They are to him what Linford’s lunchbox was to him and Tinchys SITH tee is to him.. He’d asked to meet me for lunch – I moved every mountain I needed to in order to make it- (you work around luminaries like Jazzie B).

Its always fun speaking to him. We can dispute about issues all day long. We often butt horns with our differences of opinion but we love a great debate.
Jazzie was excited about being involved with the Red Bull Academy as I was at seeing it with my own eyes. An awesome project where the drinks giant gives back to the community by setting up a building full of music studios, lecture theatres, radio studios, cafes and lounges where groups of young people from across the globe are flown in free to participate in terms of training-all financed by Red Bull. The applicants apply to attend and come from all walks of life and various genres of music. An amazing learning ground. Many iconic music names like Mark Ronson and Jazzie come in to work alongside the students and give back to the community. It was an impressive set up to observe.
After watching Jazzie do his thing with the students we had a chat over lunch where he told me he was very excited by his upcoming annual trip to Antigua for the ‘’BackIIlife’’ festival that begins on April 28th for a week.
Jazzie explained that ‘’the festival is
about coming from the colonies. We take UK peeps back to the colonies. Under the stars. 365 beaches. Best 7 nights for music lovers’’.

Jazzie was also high and happy about relaunching the SoulIISoul clothing brand at Olympia at the Pure show on Valentines Day. It’s a new take on the original collection. Lots of studded T shirts.( If you didn’t know, Jazzie used to be involved in fashion before he was a music star). For the new collection he’s spent a lot of time looking at fabrics including bamboo and cotton that last. The emphasis is on longevity. Jazzie said he was doing a clothing line again as ‘’
Nowadays music & clothes are taken more seriously -back in the 80”s the fashion industry didn’t support
me the first time around. Having kids now I’ve noticed a more savvy fashion substance’’.

I wondered what the music industry in London was like back in Jazzies hey day. He revealed ‘’ because we were pro black S2S never got any press. No front covers. We were too intimidating so it was interesting to me to see an ad on BBC3 last week where they were describing “British pop” alongside Chipmunk’’.

S2S were big and respected both here and in The States- I wonder if they realise how unique that is in the history of UK music. Interesting. The Beatles. Loose Ends. Soul to soul. Spice Girls. Craig David.Estelle. Jay Sean. Ha ha!
Jazzie thinks there needs to be more support within the industry ‘’We still behave like crabs in a barrel. There’s no community any more. In my era Young Disciples and Imagination -we were united. Stop labelling music genres. The station Radio1xtra – why isn’t it on FM as well?. I bought my kids digital radio to hear the Rampages of the music scene. My kids watch AKA. Are we living in democratic society? Does good music get played or is it payola? Isn’t having a radio plugger like payola/ its like legalised apartheid!’’.
(See readers-you don’t leave a conversation with Jazzie without being given food for thought.)
Jazzies thoughts on the UK black Music scene today were interesting?
He thinks there’s been ‘’More ignorance than there’s ever been. Too much segregation. No good black management teams. No substance. Look and learn from the D&B scene.
There’s no level of integrity in the grime scene. If you’re pledging allegiances to cross over to collaborate with dance music and indie then we have a problem that’s immeasurable!. What are young acts reading? Have they forgotten about wealth? Have we bought cars without mortgages?. When my records were charting alongside rock and indie it was on their own merit!’’.

Of course I wondered how he felt about the current wave of grime-UK hip-hop acts…he explained ‘’These acts are growing wildly. They’re like the plant without the flowers. I wanna be optimistic but the flaunting these guys do scare me. God bless the Dizzees and Chipmunks but other acts-how are you a household name with no depth?’’.
Jazzie did reveal to me that his ‘’favourite UK act is Wiley because he has depth and is a source of inspiration’’.

I explained that I loved Wiley musically too but he had caused me no end of disappointment by constantly doing his ‘missing in action’ act when I wanted him to film for me. Jazzie laughed ‘’that’s cos Wiley is real!’’.
Jazzie revealed that his main champions back in the day were Eddie Grant as well as Tim Westwood ‘’I love that he doesn’t take himself seriously and takes the piss out of himself. BTW Tim its not Marley marls beats!’’…..and Trevor nelson ‘’he has a reasonable IQ. He’s a reasonable DJ and loves what he does’’.

Jazzie finished by revealing that he loves the fact that we have the MOBO Awards nowadays and that he likes the constant controversy surrounding  MOBO as ‘’it means they’ve made it’’. Without MOBOs we might not have seen grime raise its head as far as it has. The Brits and Mercury’s may not have bothered acknowledging us. Although like the title ‘’Music of black origin’’ states, when S2S came out we were black. Not urban. I rest my case’’.
See you in Antigua Jazzie!