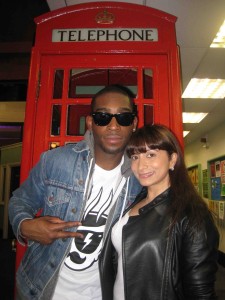 Really how many cities globally are as exciting as London! I love this city! Weekly there are free activities from the worlds of art, fashion, sport, music and more and you only need wonder past Leicester square most weekdays to glimpse and get a Hollywood superstar to speak to your mum on your mobile!.
Whilst Jennifer Aniston and Gerard Butler were swanning up and down their W1 red carpet I was down in Brixton at The Ritzy for the premiere of the movie Shank featuring Bashy-more on that next time. Next it was the first showing of the Blaze theatre show, before that it was comedian Kojos Comedy Fun House TV recording for MTV Base, and of course the most important-Mothers Day.
I don’t think my mums like most mums. Instead of hinting for gifts and revelling in her day she scolds me if I so much spend more than 50 pence on her as she says it’s a waste of money!. If I get her flowers I get a good cussing for frivolously wasting money.

Someone who epitomises the words money and frivolity is my old compadre P Diddy-or Puffy as we who have known him from the early days still refer to him. Puff took a quick whirlwind trip to Europe to promote his latest album ‘’Last train to Paris’’ (out June 22nd). He hit Paris before London and no doubt the opulence and pandemonium was stepped up to level OTT before London for once, experienced the tamer version. Only fair after all he didn’t name his album ‘last 207 bus to London’’.
Anyhoo, Puffs London party night was a Crazy night- he hit 3 clubs in one evening (Amika, Runway and Jet Black ) where he was rumoured to have been paid by at least 2 of them between 20,000-50,000 to turn up. At Amika, Puff walked around with personal fragrance sprayers who sprayed his Sean John fragrance around the venue approximately every 20mins …to ‘keep the scent in the air’.He also had his very own coat hanger girl!! Lol. Nothing should surprise us about Puff. When I went on numerous tours with him throughout the years he would insist on all black rooms with white candles and white flowers with buffets and champagne as well as a leopard print ironing board. Yes. Really.
On this occasion too Puff didn’t disappoint in the diva stakes as he had his personal assistant with him who was at hand everywhere he went to simply, hold his large white brand new lamb’s skin cream coat and scarf when he got to the venue and to helped him put it on again as he left.
We all know Puffs a businessman and one of his team told me he went to Amika because ‘’it’s the only club that actually stocks his supreme vodka Ciroc (he refuses to drink any other brand)’’. At one point the waitress brought another brand of vodka to him and his large managers leapt at her to remove it.
Then it was onto the Runway club where the DJ spent the first half an hour playing new tracks from the album, then at 6am, Diddy was still going strong and partying at Jet Black. He had UK magician Dynamo by his side performing magic tricks but he must’ve been feeling his age by now as he drunk only water at this venue. Straight afterwards he legged it back to his hotel to pack and catch a flight back to the US. Again his team explained ‘’he doesn’t like to sleep for fear of missing something’’. What a nightmare- I pity his team who therefore don’t get much sleep either!

The Americans weren’t the only ones running this town that week. The UK and USA charts are leading with young British urban talent that a decade ago were lucky if they got played on British radio and TV channels let alone headline their own tours. It’s a new day. Our youth are inspired once again. However, it is important to remember that not every young person can be, or has the talent to be a music star so its always best to spread the diverse talent that’s at our fingertips. The seeds that are being planted by young ambitious folk now means that in a decades time we could have a black prime minister in this country. All our networks are slowly growing and we’re rising higher and higher.
This past fortnight I’ve seen young up and coming actors push their way through (Jason Lewis BBC/ Aml Ameen-Hollywood!), film makers inspired by Noel Clarke, young TV makers (SBTV.ONLINE), fashion stylists (Richard Shoyemi), video directors ( Jak Frsh), business men (Alexander Amosu), sports and Olympics hopefuls (Lesley the Boxer BBC3) and many more. It’s a beautiful thing to witness the climate go from no hope to all hope. Its all too easy to sit back and accept the current success as the status quo but don’t forget winds change and trends are like the proverbial see-saw-up and down. Today’s flavour of the month is tomorrows chip paper.
Recently a young man known to you and I as Tinie Tempah hit number 1 in the UK charts with his debut song. With many years hard graft under his belt he’s slowly worked his way up and a few days before it was official that he was a number 1 star he held a showcase in Central London where his friend, (note-not label mate-‘’friend’’) Mclean opened up for him. This is what true success is built on. Unity and support of each other. Mclean came onstage at 8pm to a fully packed crowd at the underground venue and sang his heart out. With very strong vocals reminiscent of 80s star seal, Mclean invited his friend Faith FSX to beatbox alongside him on his hit single ‘’My Name’’. Mcleans voice was strong and the audience were with him singing along word for word and the live band was amazing. And this was just the opening act! This is how far we’ve come. Opening acts were never even allowed their own band and at this standard in the past. This was a strong night that just got stronger. Next onstage was American rapper Chiddy Bang who definitely got a flatter response than the UK acts on the night but with his Lupe meets Jay Z style he soon had us nodding heads, but mostly thinking ‘come off we wanna see Tinie!’’. How hilarious! Only a few years ago the UK crowd wanted the supporting Brit act to hurry up and go so they could see the American star turn. Now it’s the exact opposite. I say we love everyone but how can we not be proud of finally loving ourselves!

Finally host for the night-ChoiceFMs DJ Abrantee introduced the main attraction, and Tinie bounds onstage and the ram venue goes nuts. Everywhere I looked all I could see were fans and tastemakers, Radio1Xtra DJs, ChoiceFM DJs, TV folk from 4Music, Hiphop.com, MTV, camera crews from AKA, tabloid reporters from the Sun, young bloggers, other artists, managers, label crews, it was a heavy networking room.
Tinies mum and dad were in the house. And he went through a full set of hits including his early classic ‘’Wifey’’. Of course during hit ‘’Passout’’ he
brought on underground about-to-blow producer Labyrinth to perform it with him.
The Sunday that it was official that Tinie was number 1, he threw a party at club 24 with his manager/cousin Dumi Oburota where original Sugababe Keisha , Tim Westwood, Tinchy, Skepta, Ashton villa football players and friends were spraying champagne all over Tinies head whilst DJs Manny Norte , Ace & Vis , Twin B and Matchstick were spinning.
Tinie deserves high praise for his hard work. As does Dumi. Not everyone can be the main star player and Dumi is a sure-fire star maker.
By signing Tinie’s music to Parlaphone with his own label ‘’Disturbing London’’ this guy has done it against the odds.
Dumi told me that his aunt-Tinies mum ,had told him a few years back that her son was dabbling I music and could Dumi offer him some support and guidance.
Dumi came on board and they recorded material and spent a lot of money and made mistakes, but Dumi studied his craft. He learnt about the music industry by reading books. He told me the ‘’main thing is understanding your product, being bilingual and networking’’. Rather than having a chip on his shoulder he added ‘’Being young and black is a benefit so I can prove the stereotypes wrong’’.
Dumi started Tinies press roll by attending the big music industry conference Midem with his distributor. On their return he realised he couldn’t afford to make Tinie block buster style videos any longer (like Tears/hood economics), so they decided Tinie should start up his blog ‘milkn2sugars’ which was getting over 70,000 regular monthly hits. Dumi then met the Live Nation team- got Tinie the Wireless Festival bookings for the next 3 years before Radio1Xtra jumped onboard to support the ride. Dumi laughed at recalling most peoples positive attitudes revealing ”Even Jez Welham from KISSFM was nice”
We all await Tinies album ‘’Disc-covery’’ soon and his second single ”Frisky” around May time when he will also be supporting Mr Hudson on tour.
Dumi attributed their success to hard work and the climate stating ‘’A powerful army that moves together-wins’’. I will be looking out for Dumi and Tinies new acts from ‘’Disturbing London’’. Rumour has it they have a trio called ‘’All about she’’- apparently like the Pet Shop Boys but with a girl.
Come on UK- Keep on keeping on!.