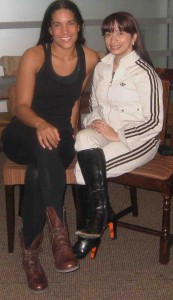 Much revelry has been had this weekend for Mariah’s birthday/anniversary –as you’d imagine the Carey/Cannon household celebrated in typical 12 year old fun and frolics.
Other shenanigans this fortnight included attending the TV recording of Kojos Comedy Fun House at Café De Paris for MTV BASE. A very fun night where once again young comedians from all over the UK had their opportunity to make their mark.
Then we sauntered down to the opening of Westfield’s uber stylish village area’s new live music and brassiere venue Caffé concerto where Mica Paris, Rose Royce and Terri Walker all performed. A grand piano ,pianist and saxophonist graced the central space whilst my crew and I attempted sweet talking the manager for complimentary member cards and did a good job eating up all the Italian delicacies on offer.
Next up it was another dinner at The Ivy with a West End theatrical mogul after which I balanced out the ‘live good-live well’ karma by popping into the West End Blood Donation Centre to give blood- its got to be done regularly to say thanks and give back for all that I’m blessed with.
My business day has been focusing on TV music specials as well as all the in-house planning for 2012. The enormity of how huge that year will be in London has struck me by hearing the plans from early in the year all the way through to the end of the Olympics-its going to be a surreal once in a lifetime opportunity to experience something iconic for many of us.

Thereafter it was off to the premier for the movie SHANK in which our very own music mystro Bashy and actor Adam Deacon amongst others starred. As we arrived on the red carpet the girls outside the Brixton ritzy were hyper-ventilating and screaming for grime artist Scorcher so hard you’d think he was Usher!. Inside the foyer I bumped into Kojo, Bashy, Donaeo, business entrepreneur Charles Gordon, Flava magazine and many others who were commenting that the screams outside were so loud you’d think that Tupac had returned. Directed by well known music video director Mo Ali,(Pow 2003), the movie SHANK is set in a futuristic London where society is all but wiped out and communities are over run by gangs. The movie looked and felt very new, unique and ground breaking in its very video game based visuals but if I’m honest I wasn’t convinced by the style-at points it was difficult to watch but perhaps that’s because I’m not a huge video game fan . Having said that it’s a story that will resonate with young people everywhere and the anti knife crime message is the main focus . Bashy was very good as the non violent boxer and confessed that his pal-Lesley The Boxer-said his stance was wack!’’. He added that he worked hard and wanted to learn as much as he could give a good performance and take the skills he learnt here to his next film. He revealed the worst thing was waiting around when its not your scene. ’’long ting’’
One impressive thing was the programme which contained profiles and interviews of all the cast as well as sections like a ‘grime urban dictionary called ‘’Shankology’’ that broke down definitions like ‘’bare’’ (to have a lot of something), ‘’crepes’’ (trainers), ‘’wasteman’’ (a lazy or stupid loser doing nothing with his life) and many many more that couldn’t be mentioned in this family newspaper. It was actually a very well written, entertaining, piece of work. Topping off the UK takeover vibe was the fact that the films sound track producer George Ebenezer (GGI) involved a range of UK musicians from Bashy, Loick Essien, Tinchy Stryder, Boy Better Know, Roll Deep, Mz Bratt, Giggs, Donaeo, Ghetts, Tempz, Newham Generals, Speech Debelle, Dotstar, Ddam deacon and more making it a very strong look for the Brit scene, that’s set to be a foundation landmark that gets built upon.
When young teams get together and graft hard the success that’s coming is inevitable. Not only has the GGI team been working on music and movies but part of their team that’s impressed me no end is female boxer otherwise known as Lesley The Boxer.

Seen this month on BBC3’s LAST WOMAN STANDING Lesley is a West London stunner that is about to blow up in the mainstream.
Growing up in Kilburn, Abbey Rd on the Estate side, the daughter of an Irish mum and Ghanaian dad with 2 brothers this young lady is a gorgeous tough cookie that’s set for big things. Always having been a bit fearless growing up with 2 brothers and a mother that grafted hard and travelled well with her family ,ambition is in Lesley’s DNA. She got into brawls with kids at school but was never a bully. She told me she used to get into arguments with men who were disrespectful. She moved to Willesden at age 10 and wanted to be a theatre actress so attended the Brit school where the people annoyed her with their pretentiousness. She recalls ‘’having a ball and smoking a lot of weed’’, and going on from there to studying music marketing at university where she achieved a first!-smart and cute-don’t you just love that!.
She worked on the MOBOs for a minute, then with Roll Deeps management before setting off with 4 girl friends to travel the world. After conquering India, Malaysia, Cambodia and more with their back to basics adventure which included buying clothes along the way she returned to the UK with a new frame of mind.
With her strong smoking habit, at 20 years old tried to get fit so started boxing at Allstars Gym in NW10 with straight 2 hour sessions. Once she got past the initial pain barrier the gym trainer that she fondly calls Mr A- (Mr Akay- MBE-
A local hero) asked her to join the amateur fight class. She went through the motions of getting a medical card to say she was fit to box and so it was just 4 years ago that she began boxing. Her first fight was an experience that she’ll never forget where she fought a girl that already had 6 fights under her belt. Other fighters used intimidation tactics like doing pre fight tuck jumps. Lesley pays them no mind and simply focuses on not getting wound up and using controlled aggression. Lesley recalled how exhausted she was mid fight but her mind told her to put her hands up and protect herself and even though she lost she persevered and went on to win the ABA (amateur boxing association) championships.
Once you start a journey the hard work quickly leads to more achievement and next she was selected to box for England and became the 1st UK woman to win gold at European championships in 2008 on first entry.
At the time she was still-(believe it or not-) working for a music management company in Shepherds Bush but was extremely focused on her rapidly flourishing sports career.
2 months later she saw advert for ‘’Last Woman Standing’’ via BBC Sports and got picked for the show!.
This from a girl who had never been hugely into sports and had only played netball as a kid!. Lesley explains that ‘I always wanted to be a performer of some sort on stage with the theatre and so to me this was just a transferable skill which I needed to wear a head guard and mouth piece for.
Readers-Lesley is so gorgeous I couldn’t hep wonder if she’s ever concerned about ruining her good looks.
She laughed and explained ‘’that knowledge helps me to keep my hands up and protect my face at all times-its extra impetus’’!
Currently Lesley is waiting to attend team GB”s selection camp and has gone through to the final stages
which is happening right now.
With Lesley’s camera friendly face, articulate manner and go-getter attitude I can see her juggling a successful sports and showbiz career. She confides that she would ‘’love to do something onstage like the vagina monolgues’’. Wouldfnt she and fellow boxer david haye doing a tv show together be automatic ratings!
Coming from a group of friends and family that are very musically gifted I asked what Lesley’s favourite music to train to is?
She revealed that she has her i-pod on shuffle and by strange coincidence Kano always pops into her training play list. Other favourites to kick ass to include Fella kuti ,Bashy, Block Party, House music, anything with a Hiphop-esp Nas Vibe or mood music.
As a sports viewer I love seeing which track pro boxers use as their theme tunes to enter the ring to . Lesley laughs and admits she’s given it a little thought and amongst her favourite choices are Buju Banton- Champion, Jesus Walks- Kanye, and Alicia keys & Nas-Warrior Song.
Lesley’s training regime is 6 days a week. 4 days of boxing. 2 days of running outdoors. She describes it as her therapy. Diet wise she eats everything but attempts to stay away from chocolate hobnobs as she tends to get through the whole packet in one sitting.Like most sports people she avoids white bread and rice.
Being a girl in a mans world must be interesting. Lesley nods ‘’yeah I get mixed responses from people. Mostly surprise and disbelief, I’m a girly girl so other male and female boxers don’t often take me seriously’’.

Lesley’s will be attending the world championships in Barbados later this year and I’m certain her sheer grit, determination and self belief will carry her to high echelons .She has the kind of face brands would jump to have on their books. Expect to see her advertising vitamins, deodorants, sports brands and more. Lesley’s last words were ‘’I’m so grateful that I got through school.
Anything we can do to build confidence or build power with young people we must do.
If you want to see championships you have to develop them whilst they’re young’’.
This lady is one to watch- follow her journey to join the elite at Twitter- lesleytheboxer
.