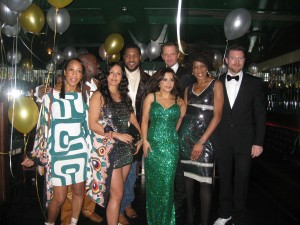 See all the pictures here

I am beyond belief. Obnoxious, outrageous and a lil crazy. All the best creative folks are. Being slightly nuts is a prerequisite for dynamic, forward thinking genius!. This year I actually outdid my past efforts and made my birthday last well over a month. Now no-one knows whether I’m a Capricorn or Aquarius. I had an intimate PJ party chez Dotiwala in January and last weekend I had a big bash in central London. Before it even got started I had to change the venue twice cos the club policies wanted to micro manage my guest list and even requested me to take off some of my guests/personal friends from it (including Sway, Lethal B, Westwood, Rampage and more!).

These people weren’t hardened criminals but merely well known artists, DJs etc. Not liking that policy at all I switched clubs to accommodate my people. Just for a laugh, cos we know that police and the 696 bill means artists like Giggs and So Solid will be an issue, I put them all under pseudonyms. Showing that I have a sense of humour after Giggs’ diss track about me last year called ‘’Last straw’’, he and his guest were on the guest list as ‘’H.Ardest’’ and ‘’L.Straw’’. LOL!. In the end I held the party at WILLAS in Mayfair. It was perfect. They never once asked about my guests, they accommodated my food needs; they allowed me to have my own DJ’s- my mates and brothers in arms -the triple threat that are DJ Manny Norte (the name you can trust), DJ Jarren C and Lonyo. Not only are they currently genuinely this cities best party rockers, but it doesn’t hurt that they are all fine as hell and easy on the eye too- the ladies in the house were swooning.

I guess its no coincidence that they run celeb parties when it comes to music. Well, Beyonce, Rihanna, Kelly et al, I knew and had them first-so there! he he! Outside the club on the red carpet guests were greeted by a huge media banner board,…of photos ….of me that my media pals thought would be funny-you know me-I loved it. Even better? Another resourceful best friend had a stamp made of my initials to brand every one of my guests entering and leaving –how fabulous, my inner need to leave my brand on all around me (like the proverbial dog stating its claim) fulfilled. Knowing that clubs often get worried by a hip-hop looking crowd I decided to make the theme ‘Motown’.

A reason for guys to don their swanky suits with a quirky twist and the ladies to go all out with feminine, sexy ensembles. Also-immediately there’s a sense of fun and no attitudes or moody peeps. Everyone certainly went all out. By 9pm we had Rick James (Troy), Marvin Gaye (Richie P), The Temptations (Maclean, DJ Abrantee, Thadboogie, song writers to the stars Wayne Hector and Ali Tenant), next came Mary Wilson (former Mis-Teeq lead singer Sabrina Washington), The Supremes (ex Mis-Teeq member Su-Elise and Radio1Xtras DJ Sarah Jane). Clearly a lot of guys let their beards grow a la Marvin and others wore afros for 2 hours before it got so hot there were just a pile of afros and Rick James weaves flung on a sofa-ha-at least now guys know how ladies with weaves feel-it ain’t easy having long tresses fellas!

My crew-5 girls/5 guys-arrived at 6pm in our tracksuits to get it all together from microphones and silver trays to banners and napkins. We spent an hour getting the silver and gold helium balloons together accompanied by flutes of champagne so we were merry by 8pm. To be honest without my crew I’m nothing-they sorted out everything including the giant white chocolate and exotic fruit Patisserie Valerie cake that never even got cut as the dancing didn’t stop. The night began with Motown themed soul food from THE SPOT in Willesden.

They had tray after tray of mouth watering hot fried chicken, chicken waffle syrup mini sandwiches and corn bread served by cute waitresses. Kiss100fm”s DJ Swerve , Master Shortie and hip-hop photographer Paul H all looked very Blues Brothers meets Motown, whilst national lottery presenter and former Eternal singer Kelle Bryan wore patterned angel wings. Legendary female rap group Cookie Crew member Cookie won the prize for dancing non-stop from 8pm-4am and looked as immaculate from beginning to end with my young Harlesden massive queuing to grab pictures with her at the end of the night. Good thing all were costumed up and they didn’t recognise Blak Twang, Mis Teeq ladies, Master Shortie ,Wretch32 and Smurfie Syco or there may have been a full on photo shoot!

However as expected at a party full of many music industry peeps there were a couple of randoms who kept trying to wrestle the mic out of my big brother Richies hands to ‘’spit for the crowd’’. One succeeded for about 10 seconds before being kicked to the kerb early in the night. Thank goodness then when as the party hotted up and Manny Norte began remixing in Motown classics with old hip hop classics that certain artists in the house were moved enough to take the mic and show how its really done. Asian R&B trio Serese (who performed at the MTV Asia awards), jumped up first to sing the Mary Jane girls hit ‘’All night long’’ and received a rousing applause.

Not to be outdone next up was new about to blow singer Maclean (son and nephew of John and Bitty), who sang a very heartfelt sweet version of Marvin Gayes ‘Too busy thinking about my baby (Jasmine!)’ After that it was like a free for all on the mic with the gorgeous Addictive ladies jumping up to take us to chuuuch with their version of Stevie Wonders ‘Superstition’ before Kel Le Roc and Terri Walker tore the spot down with renditions of Motown/ lovers rock/reggae, you name it- it went down. That of course (blame it on the alcohol) made the non singers brave and a completely unrehearsed or prepared DJ Manny Norte, Abrantee and Rampage founder Richie P serenaded me with their crazy version of a Jodeci classic-which people began videoing so great was their resemblance to the R&B supergroup!.

By 2am the club looked like Soul Train déjà vu-and the men kept telling me they were having to drink more than usual courage juice to approach the ladies as all the women looked ridiculously glam. Fashion designer Patrick Kevin and his fly-as-always boys looked dapper and flew the flag for coolest male dance crew early on, though soon enough they were hotly contested once Hip hop theatre entrepreneur Jonzi D took over the dance floor making a break-dance and body popping circle which then presenter/DJ Abrantee and Presenter and radio host Kat had to show off their skills in. Actress Tameka Empson then took the circle over and had everyone rolling with her comedy impressions of a back flipping breaker. Within moments London and New York were jamming together as Former hot97 New York head Tracy Cloherty , Ice cream company mogul Pina Colicci, PR maven sisters Jennifer and Beverly Mills, my childhood Southall and Harlesden massive, Former MYSpace don Andrew Davis and PR man about town Saj Ismael, Eastenders star Preeya Kalidis-(Amira), Former Honeyz lead singer Celena Cherry and her glam squad, Warner music ladies Taponeswa Mavunga and Mel Rudder and many more were actually throwing shapes.

It was ,as we like to call it ‘’hilarity!’’. I think the younger hip-hop grime crowd may have been stunned with the way us 80”s old school got down. Cookie said ‘’we’re old school and true school, new school ain’t ready for us’’. Never a truer word was spoken by the paralysed look on the young uns faces as they watched us electric slide, soul train and break out the stanky leg!. I smiled knowingly as I watched my 21 year old god son jamming to slowjams with his gal, the kids I grew up playing on Southall streets laughing with my former MTV News crew, music chart names singing with my family and all jamming to classics like ‘Electric Relaxation’-Tribe Called Quest,, ‘You dropped the bomb on me’ -Gapp Band, ‘Flava in your ear ‘ Craig Mack  and ‘Rumpshaker’ Wrecks n Effect. At 3.30am , much later than I had predicted, the music was shut down and still 50 peeps hung out to chill, chat, discuss who looked the best, have a last minute dance off-it was too much. I looked across the room at all the people that I cherish in my life that have crossed my path and shaped me into who I am today from school and university pals, to Channel 4 and MTV pals, to my bosses, my interns my friends and more-they’ve all made me who I am .

I have been blessed with many moments and its all thanks to these people. The 3 morals of the story?. 1-The most beautiful view is the one you share with loved ones. Its not where you’re at-its who you’re with. 2-You can have a ‘’black music event’’ in central London without any problems, 3- I am older, wiser and when I need to change out of my 4 inch heels into my Ugg boots, even with my emerald green glam gown on-I feel no shame. Even when celeb stylist Richard Shoyemi looks on disapprovingly!