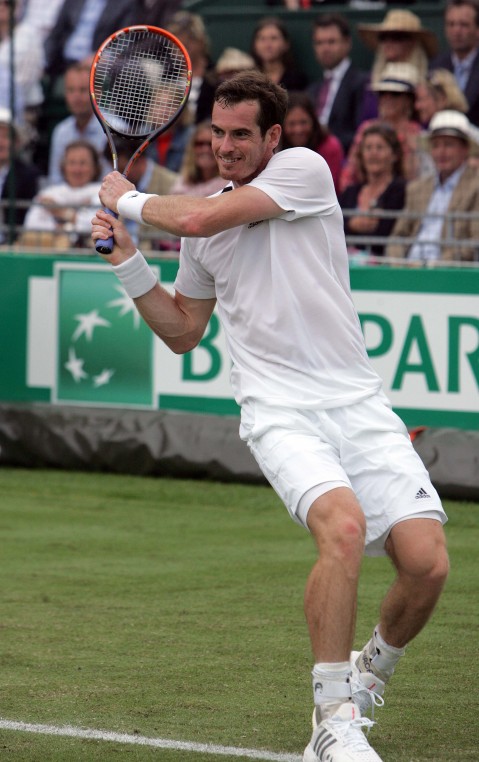 ANDY MURRAY SHOWS HIS POWER AT THE BNP PARIBAS TENNIS CLASSIC WEEK AT THE HURLINGHAM CLUB.

Every year when tennis season comes around, the usual extra Wimbledon fluff starts appearing in my inbox.

E-mails from PR companies pushing their sports branded clients ‘’Wimbledon whites’’ shoes and sports wear and fashion accessories that are ‘’just perfect to impress the Wimbledon crowd’’. Invitations from tennis themed organisations that create tours of tennis locations like Wimbledon Lawn Tennis Museum. Fancy party invites themed around your ‘’favourite all time Wimbledon champ’’ and so on. 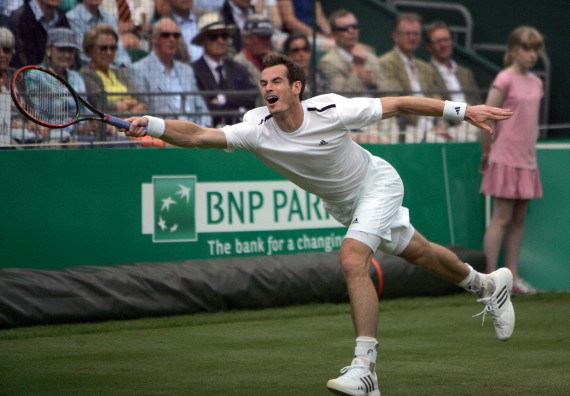 Also, leading up to Wimbledon are a number of warm up tournaments to get the players back in their stride and prepare the fans for the big event. The fanciest of these are the warm up games at the BNP Paribas Tennis Classic week at the Hurlingham Club, which takes place at the height of the summer tennis season, the week before Wimbledon, which this year had its strongest line up to date with World No.1 Nadal and Wimbledon Champion Murray.

Murray was be joined by a world-class line-up of tennis legends including: Tim Henman, Goran Ivanisevic, Mark Phillippousis, Pat Cash and crowd pleaser Mansour Bahrami, who also all played throughout the tournament, 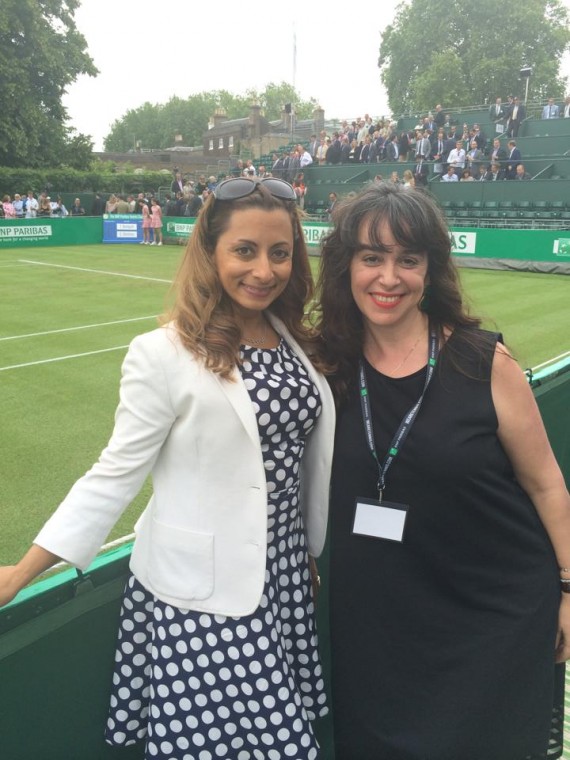 JASMINE DOTIWALA AND HELENA MCGEOUGH (HEAD OF TV AT VIRGIN/EMI) AT THE TENNIS!

Set in the beautiful surroundings at The Hurlingham Club (which is an exclusive sports and social club based in Fulham. (So exclusive the waiting list for off peak membership currently stands at 20 years and nepotism reigns here as children of current members are give preference when vacancies arise!). Lords, actresses, politicians and royalty make up its VVVIP list.

Its Edwardian clubhouse, set in 49 acres of Greenland is so elite it offers sports activities that only HNWI usually have access to like clay pigeon shooting, croquet, golf, cricket, skittles, squash, tennis, bowls and swimming. It’s like a country resort, slap bang in the middle of a bustling city. In 1873 the club published the rules of polo, which most of the world still follow today and the following year played their first polo match. 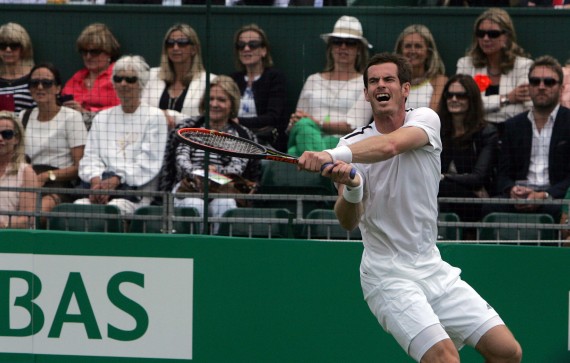 I was lucky enough to find myself attending the event for business last week when our champ- 27 year old Andy Murray- was playing Wimbledon’s 23rd seed – Spain’s Tommy Rodredo. The invitation requested that all guests respect their wishes for ‘’Smart dress code please. No jeans or trainers. We suggest you bring some form of warm clothing if overcast and chilly, or a hat and sunscreen if sunny’’.

Testament to the standard of a facility and its members is their wi-fi policy. At Hurlingham this was ‘’an open wireless system which does not need a password’’. None of the usual #firstworldproblems logging in and giving away all your IP address details here darlings. You can tweet until you’re dizzy.

The reigning Wimbledon Champion Andy Murray was excited about making his annual pilgrimage this year stating, “Playing at the Hurlingham Club last June was the perfect way for me to warm up for Wimbledon. It’s a great setting and I’m looking forward to playing again this year.”

Andy wasn’t the only excited one. My highflying record industry colleague and I squealed on entry to the main gates as we walked across the picturesque bridge and river setting to the main grounds. Set in the tranquil 42-acre grounds of one of the most renowned members’ clubs in the country, the event showcases some of the current stars of today as they warm up for Wimbledon and a few tennis legends are thrown in for good measure multi tasking as post match interviewers and day hosts too.

Pre match we were able to partake in the usual opulent ceremony of blini’s, caviar and champagne tasting before heading off to Centre Court, which seats an intimate crowd of 600. The women look very prim and elegant in their mostly unique outfits.

However many times I experience an upper class event I wont ever tire of smiling at the men who turn up in their uniform of pastel blue shirts, navy blazers and sandy trousers and the occasional gent attempts a cad vibe with a tipped straw boater hat. 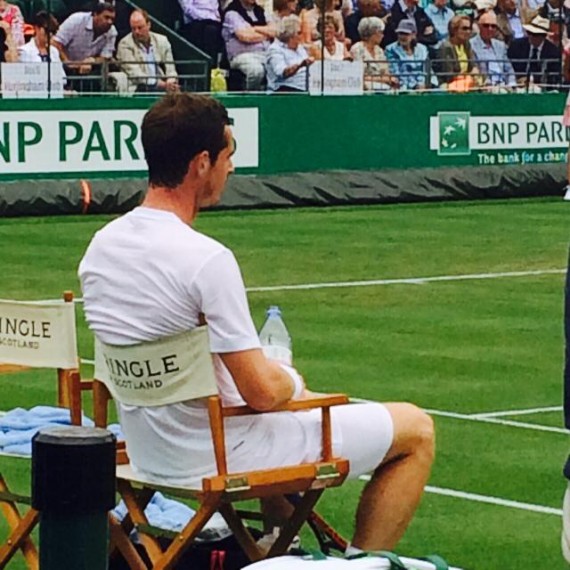 THIS HOW CLOSE WE WERE SAT TO ANDY- TOUCHING DISTANCE!

We were sat right behind the umpire and next to the paparazzi photographers in the photo pit and my heart did feel for Andy’s opponent Tommy Robredo as they snapped away incessantly when Andy served or hit the ball but all was like tumbleweed when the ball was on Tommy’s side of the court. So as our heads panned left to right, the click –click- clicks went wild rhythmically to Andy’s shots. 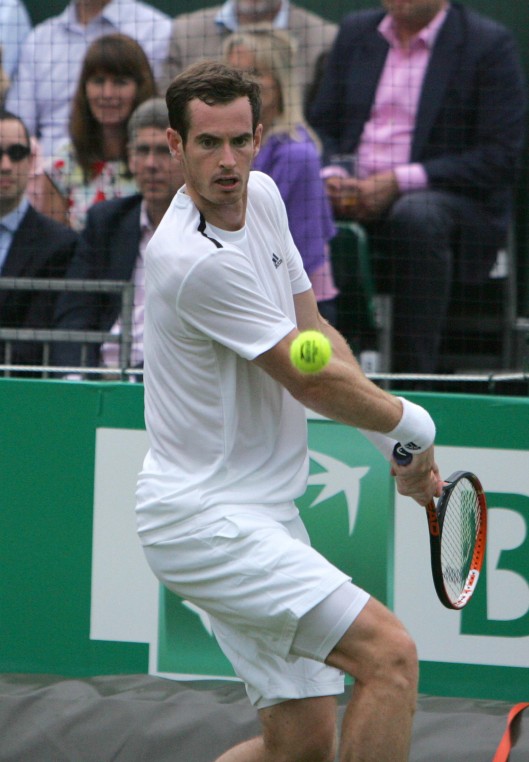 Similar focus has come via the newest recruit to Andy’s team. He’s had tennis aficionado’s tongues wagging by signing up a new coach, French former professional tennis player Amelie Mauresmo, who is herself a former singles grand slam title winner – one at Wimbledon and silver in the 2004 Olympics.
We couldn’t help keeping one eye on the match and the other on Amelie as she studied Andy’s game and smiled as he certainly showed very impressive good grass form. (Impressed? A tennis dictionary jargon phrase I picked up overhearing other convo’s around me on the day darlings!) LOL.

Interestingly, being sat in the front row that close to the action meant we could see every grimace and piercing focus in both players eyes and the tremendous herculean effort every single shot takes. In the end, Andy won with straight-sets; 6-2 7-6 (7-1). (There would’ve been uproar if he hadn’t right?) Tommy just got served! (sorry I couldn’t resist). 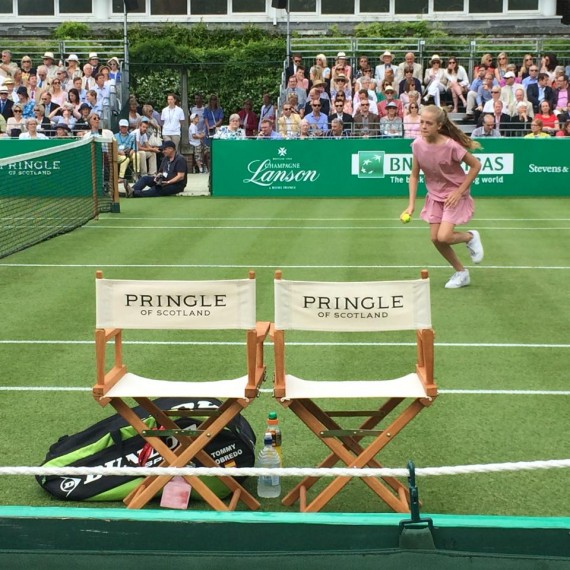 With Andy I get the sense he’s very grounded and well rounded with his extra curricular activities that don’t have him turning into a tennis crazed madman the way John McEnroe used to come across. One of his ventures for example is a five-star hotel – the 15-bedroom Cromlix — set in 34-acres of lush Scottish countryside- just minutes from where he grew up in Dunblane, Scotland. Apparently Andy is involved on a regular basis in making sure it all runs smoothly.

After Andy and Tommy’s match there was also another match between Berdych vs Dimitrov (who many of the women were drooling over as well as commenting that he was Maria Sharapova’s boyfriend. An awkward moment was when commentator/former player Andrew Castle asked him post match if more people recognized him or Maria when they were out. Eventually he admitted Maria, but I felt his pain. 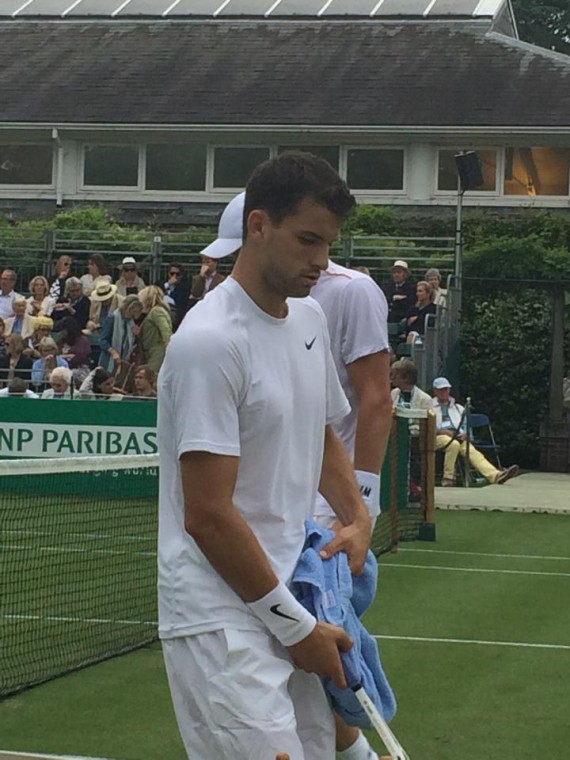 The afternoon finished with a fun mixed doubles match which included Mansour Bahrami / Andrew Castle which was the usual entertaining panto-style fun. Post match, tennis players mingled with guests off court, who were chillaxing with the obligatory strawberries and cream or high tea and scones.

A ten-minute press conference where Andy was holding court was heaving with reporters, as he told us his thoughts on Wimbledon and whether he’s under less pressure now he’s finally won;

“To be honest I don’t know, from my side it’s not, because I still want to try to win more if I can. So I’ll be putting pressure on myself to perform well, in terms of the media and public perspective it may be a little less this time, but not from myself. It took me a long time to win the first one. So it may be a bit naïve to think the second could come around so quickly, but I’ll try my best to give myself a chance’’.

On working alongside his new coach Amelie: “I’ve really enjoyed it so far, I’ve really enjoyed being on the court with her. I’ve enjoyed having her around. She understands the game well obviously; she’s also been in the position before coming back as defending champion at Wimbledon. She’s been very good so far and I’ve enjoyed it. From her side she’s just getting to know me, getting to know the guys that I work with, and how we operate. I’ve enjoyed the practices we’ve had, that’s also a very important part of the relationship with a coach is that you enjoy it and have fun on the court together, And that’s been the case in the last four days’’.
“All coaches are strong in certain aspects and you need help in all sorts of different things, but obviously the tactical side is important. Preparing for tournaments like this isn’t about tactics it’s about getting ready for the pressure of the tournament, how to conserve energy and deal with situations like I’ll have on Monday, something I’ve never experienced before. I’ve got someone there who’s been in that position, who has done it before, and that will help’’. 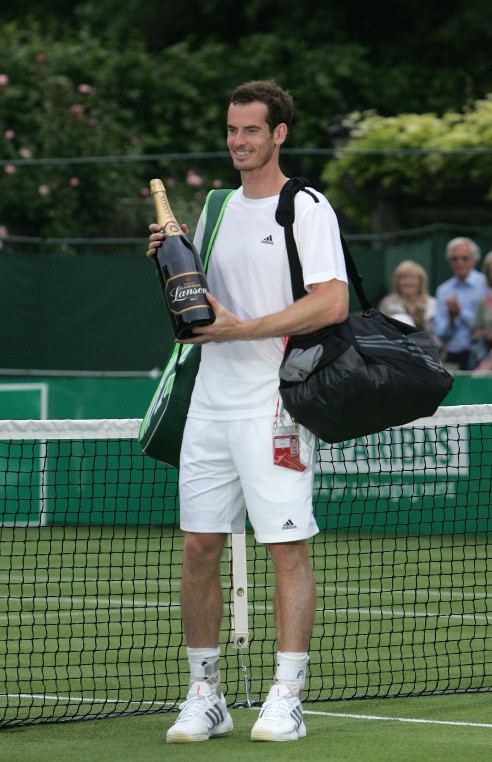 Andy’s has a stressful 2 weeks ahead of him as the British media mercilessly watch his, his coach, his girlfriend (bet she’s heard all the Love Means Nothing jokes) and families every move and facial expression. Their outfits and conversations will be under scrutiny like no other time, as now he has to defend his title and walk out onto that court this week with a new stance, as the first British male defending singles champion since Fred Perry.

” It’s important at the beginning, when you go out and walk onto the court, to try to enjoy that feeling, because it’s something I’ve never experienced before, it will be a proud moment to come back as defending champion’’.

The Hurlingham Club is one of the best kept secrets in tennis, with their Garden Party atmosphere and VIP hospitality juxtaposed with the stars of today, but this week at Wimbledon, global players, international fans, pundits and the future generations will all be in attendance and watching eagerly.

Its Andy’s time to carry on shining. You only live once, but lets hope that Andy gets to serve his Wimbledon fans with a win twice.