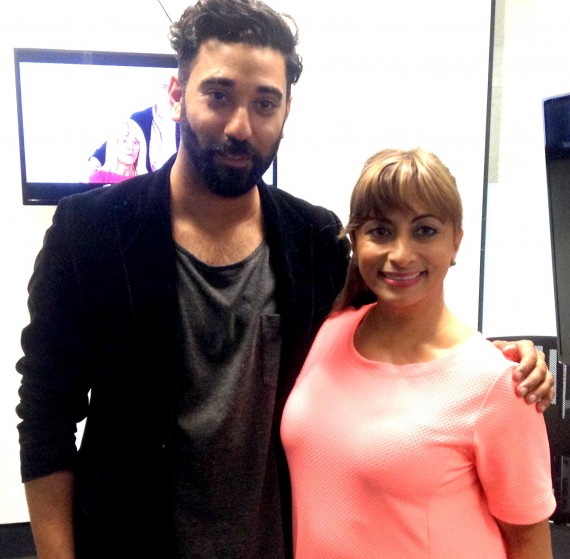 THE DAILY GRIND ON LONDON LIVE

I started my week as usual at London Live on the breakfast show #WAKEUPLONDON- The Daily Grind slot, which I do every Friday. Tune in to hear the quirkiest, exclusive stories from across the capital. Joining us in the studio are always a number of new exciting documentary filmmakers as well as key influencers and more.
Last week it was my fellow Parsi mover & shaker, former Eastenders actor/ filmmaker Ray Panthaki, who told us about his new hard-hitting film Life Sentence- that highlights the devastating effects on a family of a fatal stabbing.

It’s a film about knife violence and Ray wants it to be shown to all London’s schoolchildren in an effort to help tackle the culture of youth violence. The film was originally made as a tribute to Ben Kinsella, the brother of former Eastenders actress Brooke Kinsella, after he was stabbed to death in London. Ray used to date Brooke at the time, and told London Live about the devastation caused by the murder on the family of the 16-year-old who was stabbed to death in Islington in June 2008.

“You don’t expect anything like that to happen to someone you know, especially someone so close to you. The film reflects what I witnessed; it was a family, one of the most loving families I have ever met, falling apart one by one. “In the film I am trying to get across the effect on that family, that they each lost a part of them that day and they will never be the same again. That is the harsh reality. “Ben was like a brother to me at the time and this was a way of channelling my anger.”

His film Life Sentence, won the best short film award at the East End Film Festival last year and was long listed for the BAFTA awards earlier this year. Ray also co-produced the Noel Clarke epic, Kidulthood, and said: “It is easy to do a film saying put down your knives but I wanted to tell the story from a different point of view, from the view of someone’s sister or grandmother. “I have seen the reaction the film has on young people and I want it to have a wider audience. I want to get it into schools and in prisons. The film’s ending in particular sparks a lot of debate. At first they say ‘what is going on’ but then they understand.”

Last year 12 teenagers were murdered in London, seven of them victims of knife crime so this film is timely and relevant. Spread the word!. 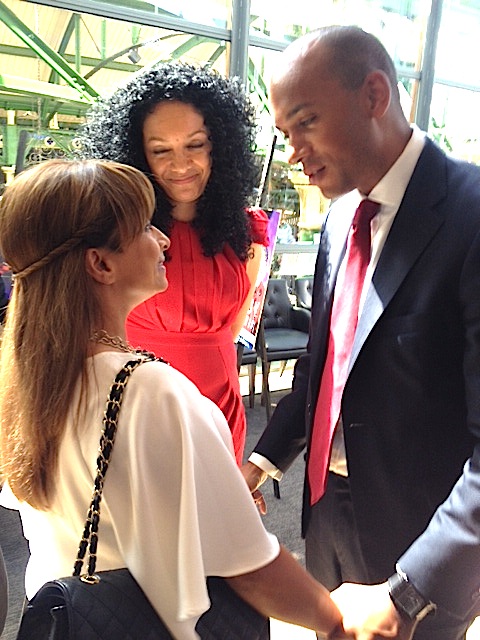 JASMINE CATCHES UP WITH THE WONDERFUL CHUKA UMUNNA AT MOBOVATION.

Next I popped along to an early morning breakfast event for MOBO called MOBOvation, where MOBO CEO Kanya King was hosting a breakfast gathering for VIPs in media and entertainment, to launch her new brand for unsung acts, and MOBO art exhibition, at Roast restaurant in Borough market. Joining the fancy start to the day were politicians like Chukka Umunna, entertainment impresario Jonathon Shalit, heads of record labels, TV society’s, music acts like Labrinth, Akala, Jahmene Douglas and Jermain Jackman who spoke movingly about the MOBO legacy. 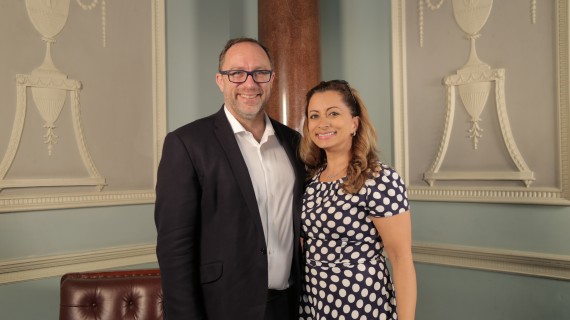 MEETING THE FOUNDER OF WIKIPEDIA

As they say, life, death and taxes is the one thing that we can be sure will affect us all and when we leave this blessed planet it would be amazing to exit knowing you’ve made a substantial mark on humanity. I relish in meeting those that have changed the status quo and the way we live. Nowadays no one uses a print copy of the olde worlde encyclopaedia but everyone logs onto Wikipedia to find out the basics about anything at all. Wiki doesn’t tell us what’s what- the residents of the world all contribute their knowledge to its content.
The founder of Wikipedia Jimmy Wales was in town to pick up an award for TECH4GOOD, and sat down and spoke to us about his vision and brilliant moments that inspired his brand. The full report and interview will be put up soon but here are a couple of snippets from our chat;

‘’I had been looking at the growth of software, free software, and programmers coming together from all over the world, collaborating, to build all the really great software that runs the Internet. Analytics, Apache, Pearl and HP, all of these fundamental software tools people are using to build the web, which are all open-source projects, all of whom are volunteers and it got me thinking about what else could be built in this way? We got this great opportunity of an Internet where people can communicate on, what else could be built? I hit upon the idea of an encyclopaedia that we could bring people together and give a free encyclopaedia to every person on the planet, in their own language and I was very excited about that idea. Here we are today”

‘’Imagine a world where every single person is given free access to the sum of human knowledge through what we are doing. That’s our vision, which is very exciting, this big thing and if you are going to spent a lot of time on a hobby, you might as well be doing something that’s historic and important and that’s meaningful to people. But that’s not enough, there a lot of things that can be historically important, but that’s not very fun, this is very fun. People enjoy the process of editing Wikipedia, than you get those people who you agree, disagree and argue with, but in a constructive way. It’s an intellectual hobby, people really like, and people get really passionate about. So I think it’s a combination of those two things. It’s fun with purpose, is what makes the community really work’’.
===================== 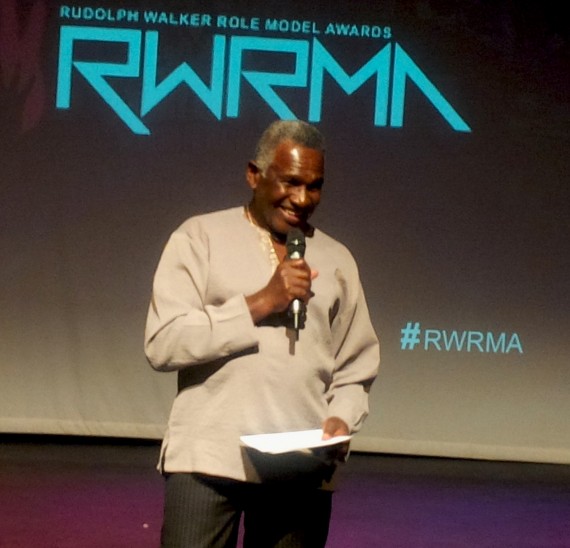 RUDOLPH WALKER TAKES THE STAGE AT HIS AWARDS.

At the weekend, up at Millfield Arts Centre, actor and Eastenders legend Rudolph walker brought together a host of celebrity mates for his annual RWiSDA (Rudolph Walker Inter School Drama Awards) awards.

RWiSDA was first pioneered in the 1970’s with two schools from Brixton by Rudolph to help young people give them a sense of responsibility, to enable to use their spare time in a positive and productive way to offer an alternative to “hanging around” after school and to alleviate the boredom which may lead to anti-social behaviour. 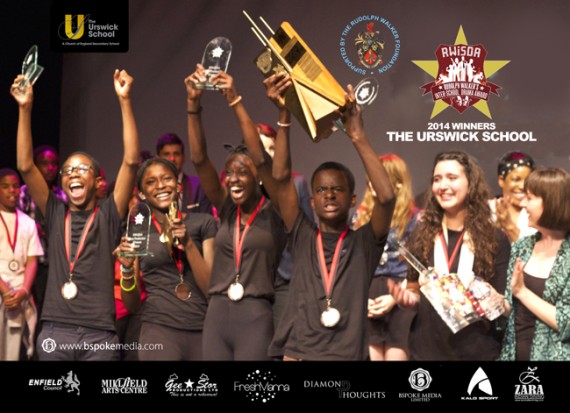 The Rudolph Walker Foundation Objectives are:
1. To provide young people with a sense of purpose.
2. To recognise that different people have different talent and skills, which need to be nurtured individually and sympathetically to help them fulfil those talents and skills.
3. To understand that self-esteem is crucial to the development of responsibility and ambition in young people; and to develop self-esteem through teamwork and common objectives and goals.
4. To give participants achievable goals that will be of practical educational value to children, young people and adults in our community.
5. To address a significant gap in provisions.
The foundation holds an annual Drama Competition (RWISDA) between young people and between schools nationally and internationally in a way that helps young people to use their spare time in a positive and productive way, and to offer an alternative to “hanging around” after school, alleviating the boredom syndrome that can lead to anti-social behaviour. 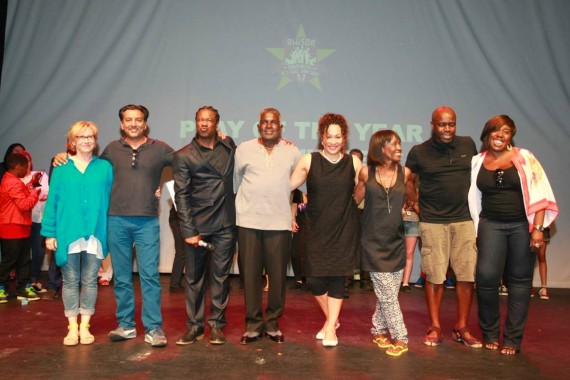 ACTORS AND CELEB FRIENDS MENTOR THE YOUNG PEOPLES DRAMA SETS….SEE WHO YOU CAN SPOT! 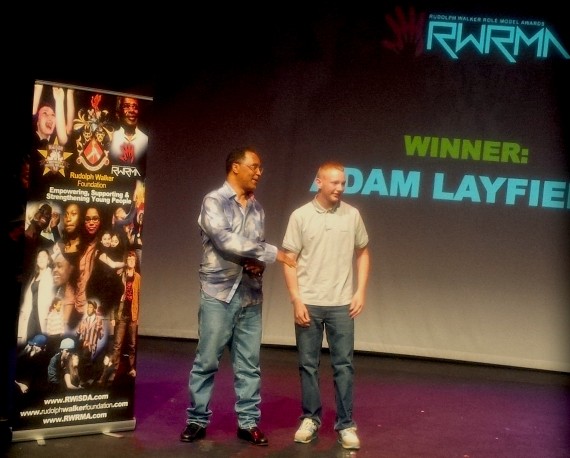 TV and radio host and the nest man to lead any function with his free-styling entertainment- Kat Boyce ensured we enjoyed a very inspiring afternoon. Michael Watson awarded prizes, Jermain revealed that his solo album coming soon would be titled Genesis and I watched the stars of our future take their first showbiz steps! 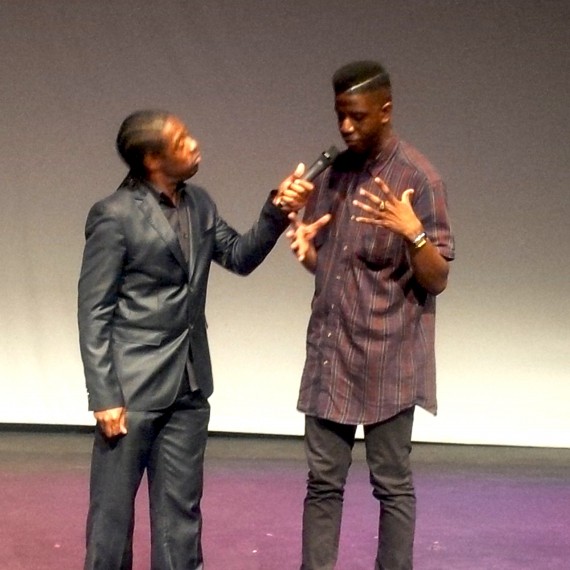 HOST WITH THE MOST- KAT BOYCE GRILLS JERMAIN JACKMAN. 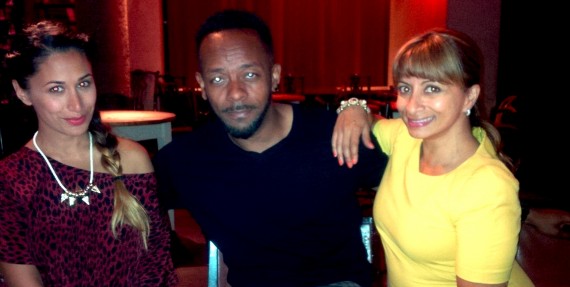 JASMINE WITH PREEYA KALIDAS AND JPESQ.

Finally I was invited by my friend, actress Preeya Kalidas to go and see her in her latest live stage show of Khandan at the Royal Court Theatre. The rest of the cast included Sudha Bhuchar, Neil D’Souza, Rez Kempton and Zita Sattar.

Preeya last appeared at the Royal Court in Oxford Street. Her other theatre credits include Joseph and the Technicolour Dreamcoat and Bombay Dreams in the West End. Her television credits include Eastenders and Britz. On film her credits include Four Lions and Bend It Like Beckham and this time, as ever, she played the character that shakes things up!

Based around an Indian family- The Gill family- the audience are sat in the round in their intimate living room. The play highlights culture clashes, sibling rivalries and endless cups of chah (tea)…

Widowed matriarch Jeeto (Sudha Bhuchar) has a strong sense of her past and principles. She’s spent her life working hard and making sacrifices for her children. But eldest son Pal (Rez Kempton), isn’t following in her footsteps. He’s struggling with his role at the head of their expanding household. Crumbling under the weight of his father’s legacy, the family business is at risk and the last remaining link to their roots in the Punjab is in jeopardy.

Preeya- is seen like never before (check it out I don’t want to spoil it for you-its on until Saturday). Its a warm and funny play about tradition and ambition and the strong message that we all tend to have everything at our fingertips and sometimes imagining that we always want and need more can lead to our own downfall.

Now I’m off to see Pharrell at his Mastercard private gig- as they say….#priceless!