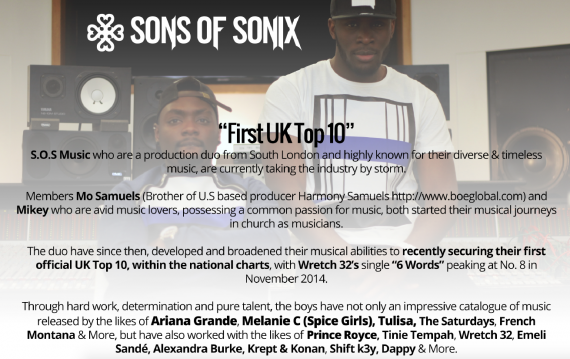 How did SOS meet?

Mikey – We met at a local church at the age of 13/14. My family left a church that a grew up at playing drums to join another church where Moses was playing keys. Since then, playing in church together, we developed a passion for music production individually. We would check out each others work and give advise then we thought at one point – two heads are better than one – and formed SOS.

What was it like growing up in South London?

Mikey – Loved growing up in South London. Its such a diverse community with the likes of African, Caribbean and Asian cultures. South can be quite gritty but I’m glad of what it made me become. So many influences from the Nigerian roots in Peckham to the Jamaican love of Brixton.
Mo – South will always be home. The different cultures have aided to where we are now. It was never easy growing up there with it being so gritty and rough but I wouldn’t trade growing up there for anything.

When did you start producing?

Mikey – I started producing in year 7. I remember my music teacher showing the class this software called Cubase and how you could basically build your own song – I thought that this was the best thing ever! Growing up i used to listen to music thinking ” who made this has the best job ever” Now i had been given the tools too. So i used to re create my favourite songs then create original material for hours after school. Since then i haven’t looked back.
Mo – It began for me in year 10. My teacher showed me about this programming software where you could make beats and record vocals. I was so hooked , I couldn’t believe this was possible lol. Those early moments always remind me of how it all began!

When did you get your first break?

Mikey – Our first break came in LA – We worked on this kid called Deon Young on a record called “Party Life” ft French Montana. It happened all so fast – One min we were making the record in a writing session, to his AnR passing by the studio saying ” This instrumental is crazy send it to me by tomorrow morning to play in my Label meeting” , to eventually getting the vocals to French Montana sent to us.
You have an impressive CV. and you are both 25. You’ve worked with the likes of Wretch, Mel C, Stormzy (Took Trey out for now ) and Ariana Grande to name a few. How did this all happen at such young ages?

Mikey – Honestly hardwork and determination. Fortunately for us, our big mentor by the name of Harmony Samuels has taught us about the game and how to basically get your name and music out there. By working with him in LA on Ariana Grande’s first album “Yours Truly”, we were exposed to the tricks and trades of the music industry and business – returning to the UK with plan and goal – to work with a diverse range of artist, delivering great, real music every time! With consistency and the grace of God, we are where we are today – with that impressive CV. 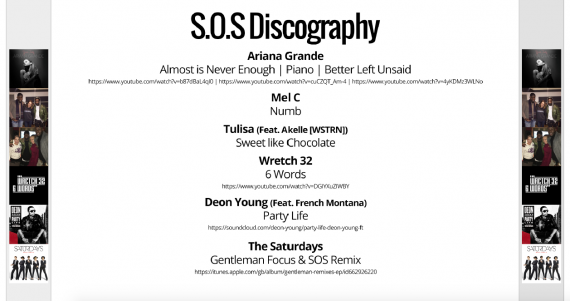 Let’s talk about the Wretch album. Congrats! Has it exceeded all your expectations?

Mo – Growing over life! For me it’s done more than exceeded my expectation. It’s always about reaching the masses and making sure that your music touches someone. I believe we achieved that with this album. Wretch was honest and true. He took people on a journey and I know that everyone related to one track or the other. So yes it’s definitely surpassed expectation.

What are your favourite tracks on the album?

Mikey – Mine has to be PRESSURE, OPEN CONVERSATION AND SOMETHING

Mo – Has to be pressure and something!

Your track record shows that you are very versatile and can create many different styles of sounds. But how would you describe your sound?

Mo – Our sound can’t be described or associated with one genre. I would say we’re known for specific instruments. Like a bass line or particular drum sound/mix or even a constant/reoccurring synth. That’s how I would describe it.

How did you manage to secure a spice Girl to jump on a track with you?

Mikey – We recently signed our first deal with Peer Music in LA and we didnt know she was also signed to Peer Music. One thing led to another and the label placed us both in a session – She is amazing spirit – such a great heart and we’re so happy to be apart of such a dope project. Her comeback is going to be amazing!

As producers who do you look up to? Who do you aspire to be like?

Mikey – Quincy Jones is my Blueprint lol for what he has done for Popular Music alone, he is the greatest to do it – plus he produced Human Nature by Michael Jackson – the greatest produced song ever lol But im inspired by all the greats – Timberland , Rodney Jerkins, Max Martin etc.

Mo – Like Mike said Quincy jones has always been the inspiration and forefront for us. Pushed the boundary and worked and made the biggest pop star time. Doesn’t get better than that. However there are other greats who have contributed to inspiring me. Pharrell, Timbaland etc
We noticed that you have spent a lot of time in LA- what projects where you working on out there?
Mo – There’s a few projects coming from states side. We don’t want to jinx anything yet but there will be some known names attached to our beats and will be on the air waves very soon.

What do you prefer America or the UK?

Mo – Easy answer. I do love UK but America is more accepting in terms of different genres! So yeah America

Mikey – Nigerian – Never understood the basmati movement lol but i have had a few Ghanaian Jollof that has done me well lol i was impressed. But yeah, Nigerian all the way – Shout out to all of my long grain brothers and sisters lol

You both have Nigerian roots. Do you like the Afrobeats sound? If so, who would you like to work with?

Mo – Our African roots has definitely contributed to our sound. The big drums and cross rhythms are a big part of our production. Afrobeats is really coming through in the uk. Think it’s great for Africa. I would for sure like to work with wiz kid. I Think his creativity is out of this world. That would be fun.

What’s coming up next? What should we look out for?

Mo- We have Stormzy album coming which we have a few records on. We also have Mel c album dropping in October and some other serious record states side. So keep your eyes and ears peeled for what’s to come!