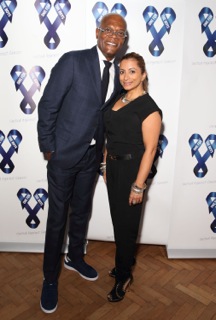 JASMINE WITH THE MAIN MAN- SAMUEL!

Last night I politely declined an invitation to see Mary J Blige perform at the I Tunes Festival, and a dinner invitation from a huge American music mogul because I received a better offer.
#blasphemy. I know. I am wrong.

I arrived at Abbey Road Studios in the swanky postcode of NW8 in St Johns Wood, to find the infamous studio two, full of fabulosity. Samuel L Jackson was greeting a very small group of guests and encouraging us all to pop our names down to sing later in the evening. I assured him my cheering skills were much stronger than my tone-deaf vocals, but he insisted the worse we were as vocalists the better. He wasn’t joking. Later when he sang, he proved that he really IS a face for movies, not the music charts. 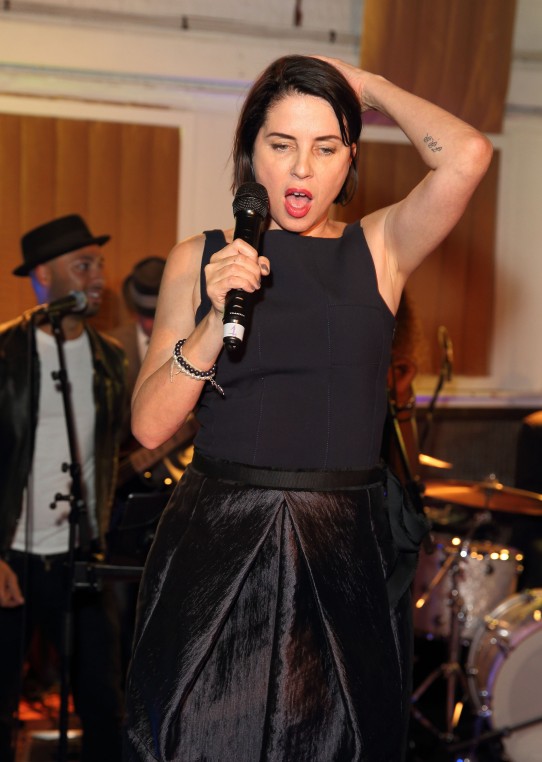 SADIE FROST GET’S HER MARIAH ON WHILST SINGING ‘FAME’

A minimal list of songs from the past few decades was passed around. Myself and Adidas head honcho, Paola Lucktung fancied ourselves singing either Irene Cara’s Fame or Cameo’s Word Up, but Sadie Frost nicked our song before we could get up there and frankly the Primrose Hill set were all priority on the list. *NOSE MAJORLY OUT OF JOINT* SMILE* 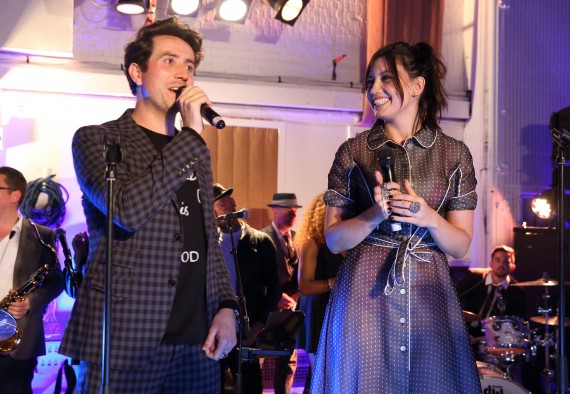 NICK AND DAISY ANCHOR THE STAGE WITH BITCHY VS CUTE COMMENTS.

Radio One’s breakfast king Nick Grimshaw and his pal Daisy Lowe hosted the stage, and were really entertaining with their encouraging yet sly slights on peoples singing talents. It was hard to be really bad though, as we were accompanied by a full live band and amazing backing vocalists, so even the worst singers- ahem- sounded pretty good, and most certainly no worse than your average Spice Girl.

Nicole Scherzinger sang ‘’the only song she knows at karaoke’’, Gloria Gaynor’s ‘I will survive’’, Game Of Thrones actress Maisy Williams sang Amy Winehouse’s Valerie, Boris Johnson’s sister Rachel sang a duet with Samuel, as did party co-host GQ Editor Dylan Jones and Tinie Tempeh and Jessie J’s manager Dumi made up a trio to sing ‘’Blame it on the boogie’’. 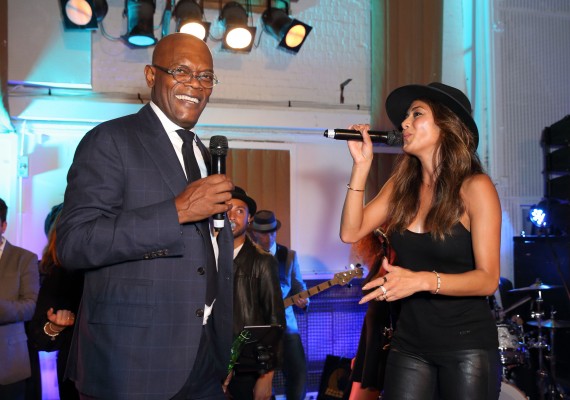 NICOLE WITH SAM SAAAANGING UP A STORM!.

All this fun was in aid of One For The Boys, the charity founded by Sofia Davis and chaired by Samuel L. Jackson, to raise awareness and funds, educating men on male cancer and the night saw the start of the recording for the charity single Say Something. 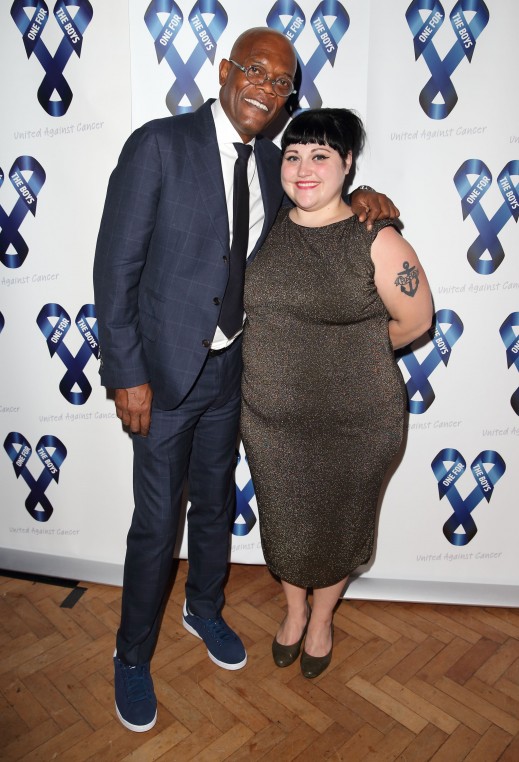 The star studded evening saw stars from the worlds of fashion, film, music, sport and TV, unite to continue the One For The Boys ‘Man Movement’ launched earlier this year. Other stars in the house included, Toni Collette and Dominic Cooper, as well as Beth Ditto and Cara Delavigne.

The evening announced the launch of the single, Say Something – featuring artists including Sir Paul McCartney, and it’s no exaggeration to say that it has to have been the greatest karaoke event of all time. Paul McCartney’s in good company. Sam’s other mates who have volunteered to be ambassadors for the project include fellow legends Michael Douglas, Simon Pegg, Colin Firth and John Bishop. 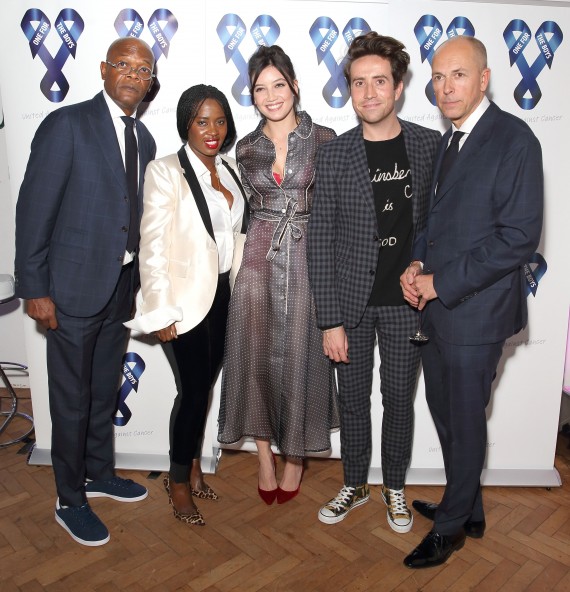 Creating a musical platform encouraging men to not be afraid to actually say something when it comes to cancer, we were informed that the One For The Boys single will arm men with the facts, the risks and tools they need to tackle cancer head on and be the perfect Christmas gift for a loved one – a doubly feel good gift of life.

One For The Boys Chairman, Samuel L. Jackson told us all,

“What better way is there to unite men than through music? Tonight see’s us mark the start of the recording of our charity single, Say Something, which we hope will make men realise that they can say something when it comes to cancer. Men don’t tend to talk about their health issues, thinking it reveals vulnerability. One For The Boys aims to shine a blue light into the world of campaigning, cutting through the noise to educate men, encouraging early detection and treatment. We believe this single featuring the world’s leading artists, can save lives.”

Uniting the world’s men through music, One For The Boys Say Something will be released in the run up to Christmas, but will it beat Simon Cowell’s X Factor offering?

To find out more about One For The Boys, the One For The Boys Charity single, Say Something and how to support the 2014 Men’s Movement, go to www.onefortheboys.com and follow @One4TheBoys #SingOFTB #SaySomething.

The One for the Boys charity single Say Something will be released in December 2014 creating the gift of life for Christmas  About One for the Boys:  One For The Boys was founded in by Sofia Davis as a tribute to a friend’s brother who lost the battle to cancer. Chaired by Samuel L. Jackson and supported by global ambassadors including Michael Douglas, Dylan Jones, Richard Roundtree and John Bishop, One For The Boys arms men with the facts, the risks and tools they need to tackle cancer head on.

Proceeds from the campaign go towards educating the nation reminding men how early detection is key, through campaigning, live clinics and removing the myths associated with cancer within men.