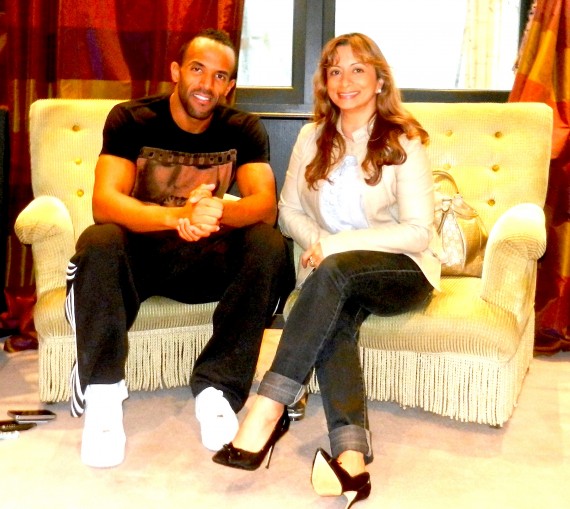 JASMINE WITH CRAIG DAVID- JANUARY 2013.
A busy week with everyone preparing for the impending Brit Awards. Labrinth threw a personal pre-Brit dinner at his restaurant in North London. Choreographer to the stars/ musician Royston had his ‘’all black everything’’ birthday party. Up and coming blonde dj twins, the Mac Twin’s began their djing residency at the W Hotel and I finally managed to watch Quentin Tarantino’s much debated film Django

So I get a request to meet with one of the biggest male acts the UK scene has ever produced-Mr Craig David. He’s holed up at the Bagioni Hotel in Kensington meeting and greeting press and talking about his upcoming music. As I wonder how much he will have changed since I last worked alongside him, I am led into a grand room where Craig is sat at the end finishing off a press phoner and immediately all his fabulous Miami tweets about sun, gyms and eating healthy have appeared like an apparition in front of my eyes. Craig is bronze, fit looking and his face is sculpted and chiselled in a way that seems very mature and manly in comparison to the early days when he was simply slicker than your average. In a nutshell, he looks happy and relaxed and in control. We greet, chit chat for a minute and catch up before getting to it…
I had to applaud him on the focused training he constantly champions on twitter. Its called eatcleantraindirty and when I’m jumping around at my virgin active class and eating as interesting a meal that’s healthy that I can and hating on Craig’s always half naked, uber fit, sun streamed pics from Miami I try not to hate. Really. I do. But I hate. . He laughs ‘’Environment helps. When its cutting cold outside its hard in the UK to maintain a focus on training. But the place I am in my life I wanted a different result and I was doing the same thing. So I changed what I was working with. It’s the same with music. You have to get up early in the morning for interviews, promotion and the rest. If my mind and body can be stronger I have to win’’.
My career journey has mirrored Craig’s over the past couple of decades. I first met him when he won a competition to write a b-side to boy band Damages song. Then he became a fast garage star with chart hit after hit and sell out tours all across the world. I saw him at the Royal Albert Hall once-it was a fascinating show. Then numerous MTV News interviews later I made a Making of the video with Craig and Kano for their track ‘’this is the girl’’ in L.A. next I had a ‘’stay in your lane’’ moment with my MTV USA colleagues as we fought over filming his MTV CRIBS show here in North London- a shoot I had set up and nearly had taken away. We certainly have history! 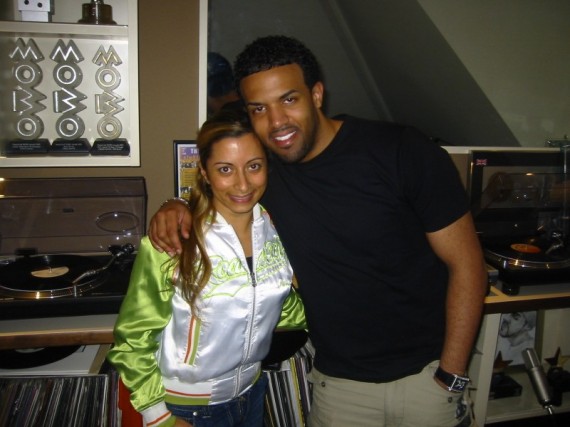 JASMINE WITH CRAIG DURING MTV CRIBS FILMING.
It’s been a while since we saw him here in the UK so what’s brought him back? Well a world tour and a new album no less! Craig revealed ‘’Aside from making my mum and dad really proud and happy, it’s the accolades like the MTV 2nd greatest album ever after Michael Jackson and landmark moments like that that have stood out for me. I’ve learnt to not live in the past. I’m not the kid that made born to do it’’. The essence of writing songs excites me but I don’t like to reference my old material anymore. If you want that itunes 99p is you. Music stars get into a routine, they make the album, do the press, do the tours and start the cycle everywhere and there’s no free time. But I wanted to break the routine and live life and now come back into it’’.

Craig owes his healthy sunkissed toned look to his new life out in Miami. By speaking with him I got the impression that he felt the UK was distracting and negative and he needed a break at a certain period in his life. ‘’Every time I went between Miami and London, flying back into Heathrow was gloomy and flat. I decided to swap it around. I moved to Miami and sold my place here and now that I have no attachment to London I love exploring it as a tourist. I can now see why Americans want to visit London’’.
I know Craig is generous and giving- he once bought his manager Colin Lester-an Aston Martin. He likes the good life! I teased Craig about his instagram photos of his sports car outside his crib that just looked like a fantasy life. He smiled ‘’ do you know what Jas; I bought my dream car recently -the Ferrari. When I was in Miami at this steakhouse I after dinner I left and jumped into the car and it wouldn’t start and I started to get stressed about people seeing me unable to start the car and then I sat back and realised. It was a moment. I thought I am here in Miami, in my dream car, what’s the worst-case scenario here? Its one night of partying you’re missing compared to hundreds more nights in your life, so I embraced the sitting back and enjoying the moment’’. 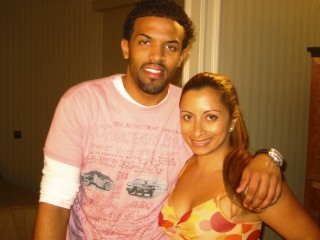 JASMINE WITH CRAIG DURING MAKING OF THE VIDEO.
Craig’s new album is imminent. He’s been in the studio a while and the new material is tentatively titled Following My Intuition. The really intriguing thing about his new music is that Craig has reconnected with his old music Midas touch making partner- Anthony Marshall (who used to be a part of the UK music producers Ignorants) at Snap Studios. Craig explained the link up ‘’My manager Colin saw Marshall in a club and Marshall played him some new stuff and Colin suggested we connect again’’
Craig and Marshall have all the equipment and necessities you’d expect in a music studio; keyboards, tracks, mics, a grand piano where they try out all their songs and… immense amounts of chicken from Mr Cee’s Caribbean food shop in North London! There is one thing that Craig doesn’t like in the studio though ‘’We have Fifa competitions and the loser has to eat chocolate as punishment….Marshall knows with my training and attention to healthy eating that eating vast amounts of chocolates like BOUNTY would kill me mentally , so I’d be sitting there sweating during Fifa dreading the calories I was amount to have to take in!’’.
Fun and games aside, I for one am ecstatic that he and Marshall are making music together again cos I hated when Craig went all American with his production teams a couple of albums in. after all, why change an already great, award winning, no1 hitting formula? 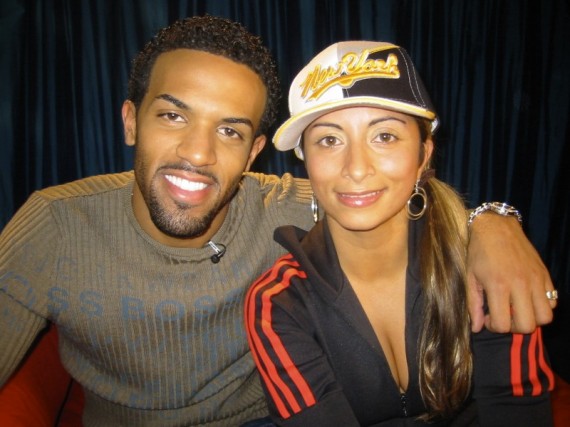 JASMINE WITH CRAIG DURING THE EARLY YEARS AT MTV NEWS.
Like me, Craig hates the idea of an artist’s album being full of collaborations as it simply ends up sounding like a compilation album so you wont find loads of duets on the new material. However do remember it was Craig that gave Rita Ora one of her first breaks by duetting with her on his track ‘’where’s your love’’ so its not Jay Z who spotted her first!
Craig states ‘’ I follow her success and am so happy to watch her grow in to the performer that I always could see she would be. When she sang on Awkward on my Trust me Album there was the voice of a Mariah in a young girl that as she grows is maturing vocally and mentally. I remember telling her that it’s just about believing in your talent and being diligent in working hard to showcase…she’s done all those things and is reaping the rewards. I’m beyond happy for her’’.
Really Young music lovers might not remember this but at one point Craig was one of the UK’s most successful male solo stars of all time and most certainly not recognised as much as he should have been. He has sold over 13 million albums, achieved multi-platinum status in more than 20 countries, amassed numerous awards from around the world but many of us still feel he were snubbed out of a lot of British awards that you more than deserved. Looking back on that time I can see that he was definitely having the last laugh living a very fun, fancy life. The MTV CRIBS show I made with him and my MTV USA crew was a highlight as was Craig on the front cover of Vibe magazine!
The irony about the way the music industry has changed for youth in the UK now is that urban music is the modern day pop music and always in the charts, but hardly any of the current TeamUK acts will be truly international the way Craig is. Craig has no.1 singles and albums globally, so it’s not a huge surprise that his tour kicks off in Australia this March. When pushed Craig admits that from the UK scene he really likes Angel and thinks he would go far internationally with his real voice, accent and song hooks!
Speaking of international issues I reminded Craig about Drakes first show here in the UK a few years back when Drake had gushed on and on about how much he loved Craig’s music and had been influenced by him. I also noted that contrary to belief, Drake was not the first Jewish urban act to make it big-Craig also takes that crown. When drake bumped into Craig in Miami not too long ago, Drake had the same respect and admiration for Craig that he once had. Its official readers…Craig is back. Get on board or get out of the way cos his second coming is going to be bigger than his debut journey!