It’s been a strange week for stories in the press dominated by race issues. 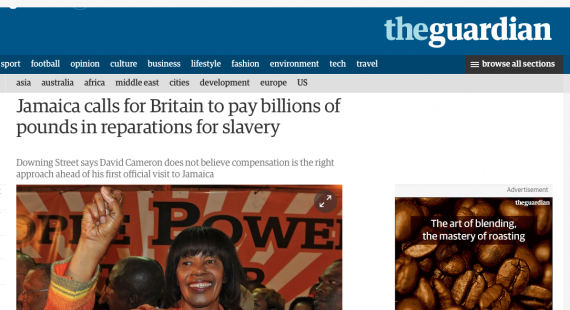 Firstly the debate about whether Jamaicans are owed both an apology and reparations for slavery by the UK, then the protest about allegedly racist nightclub DSTRKT, in London’s west end, where four black women weren’t let in, as apparently they were too fat and too dark.

Being Persian and therefore neither black nor white, I tend to hear comments from all races as they see me as some kind of weird ‘neutral in betweener’’. Many say ‘oh God aren’t they over slavery, it happened nearly 200 years ago, surely we can all just move on?’’, not realizing that the legacy of slavery in this country has kept high society, stately-home owning families rich, and allowed their grandchildren a privileged lifestyle, whilst simultaneously leaving a legacy of destructed black families, broken homes full of poverty, issues of male emasculation and more, as seen by this weeks Evening Standard coverage of life on the Angell Town Estate in South London.

It’s really important to change the perception of the black community in the UK. They’re not all rappers, reality stars, gang members or footballers. Just as many have careers in medicine, law, fashion, journalism and more but aren’t ever given any profile in public.

However, I’m not here to dwell on that. I like to think of positive actions to problems. I believe that if you can teach a classroom new ideas, they in turn can change a whole communities thinking, and eventually these small seeds can change the world. Make me sound like an eternal happy-hippie optimist? Maybe so.

Someone making small moves to change perceptions of the black community and all it has to offer is Kanya King with her MOBO brand. Thus far, for twenty years it’s mostly been associated with British black music. But this month Kanya unveiled the MOBO ‘Rise With Us’ Season (at two launch events on London’s South Bank and legendary Soho music venue Ronnie Scott’s), which highlights black talent in the wider creative arts areas. 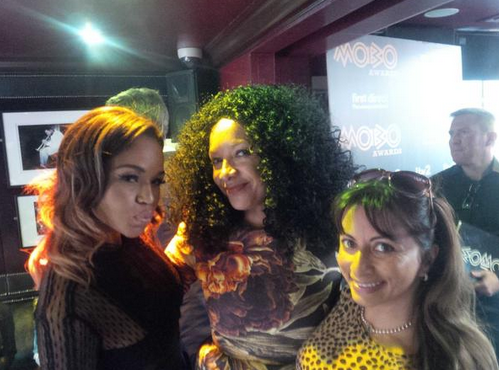 JASMINE WITH KANYA KING AND SARAH JANE CRAWFORD AT THE MOBO NOMINATIONS EVENT AND MOBO SEASON LAUNCH THIS WEEK.

The MOBO season (28th September – 4th November) see’s a month-long run of wide ranging cultural and educational events that are taking place in the lead-up to this years MOBO Awards in Leeds on November 4th.

Every act that has ever been nominated or won a MOBO Award has a story to tell. Now, it’s time to tell more inspirational stories beyond the realm of music and pave the way for the next generation. As part of its 20th anniversary celebrations, the next chapter of MOBO will look to celebrate and support those driven individuals, whatever their chosen path in the creative arts may be.

MOBO ‘Rise With Us’ Season is jam-packed with an incredible range of events all hand-picked by MOBO from across the creative industries of film, theatre, fashion and art. From a ‘Late at Tate’ event, to the homegrown critically acclaimed cast of ‘The Etienne Sisters’ at the Theatre Royal Stratford East, and the exploration of the golden era of sound systems at the exhibition ‘Rockers, Soulheads & Lovers: Sound Systems Back in Da Day’, at the new Art Exchange in Nottingham, the MOBO team has curated a programme of the highest quality. 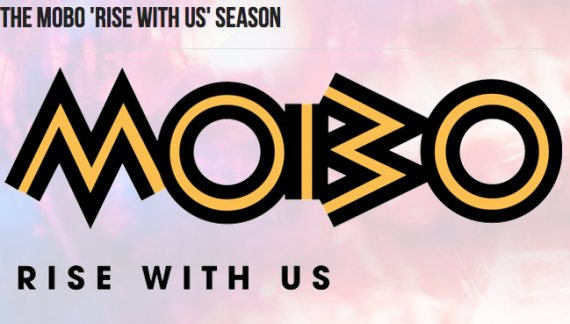 Kanya King, founder of the MOBO Organisation told me; “We are delighted to be launching this exciting season of initiatives and proud to have the support of so many great organisations such as the CIF, ITV, BFI, Warehouse, The National Theatre, CCSkills, the London College of Fashion and the British Library among many others. The Creative Industries Federation report highlighted how much can be done to address the lack of diversity across the industry and the exciting season and the amazing opportunities created by the fellowships are evidence that the industry is ready to join hands and make positive contributions”.

A cornerstone of the MOBO ‘Rise With Us’ Season is a series of curated films within the London Film Festival, including a renovated version of the celebrated Senegalese cinema of ‘Black Girl’ (1966), Hany Abu-Assad’s Palestinian drama film ‘The Idol’ will also be featured as part of ‘MOBO Film’ along with this year’s topical story of desperate refugees ‘Mediterranea’. Also celebrated will be timely Brit documentary ‘The Hard Stop’, which explores the life and death of Mark Duggan and the riots that followed, as well as ‘Fresh Dressed’, a fascinating chronicle of hip-hop and urban fashion, featuring the likes of Kanye West and Pharrell Williams. The selection of these diverse films showcases the fresh talent and established names that should be supported and celebrated within the entertainment and artistic genre.

In addition to the abundance of artistic offerings, there are also a number of educational events, including the PRS For Music Panel session for budding music entrepreneurs who can follow in the footsteps of people like internationally acclaimed songwriter to the stars Wayne Hector, as well as The Labels Fashion show highlighting the next generation of designers and stylists like international stylist to the stars Richard Shoyemi, and ‘Rise With Us’ talks held at the British Library featuring successful entrepreneurs sharing their inspirational stories I the same vein as Colorblind Cards founder Jessica Huie.
Incredibly successful black people in a variety of fields do exist – you just have to know where to find them!

The MOBO Season calendar runs from 28th September until 4th November. For further information about the MOBO Season and the events, go to www.mobo.com/season

• 28th September: The Creative Diversity Launch Report
In partnership with the Creative Industries Federation, this event celebrates the launch of the “Rise With Us” campaign by announcing findings around diversity in the creative industries in a diversity report.

• 30th September: MOBO Awards Nominations Launch
The annual event that announces the nominees for the MOBO Awards. This year we are also introducing a new award in conjunction with ITV2 as part of our MOBO ‘Rise With Us’ Season.

• 1st – 3rd October: Hannah and Hanna play performance at Greenwich Theatre London
A play written in 2001, this story is about the refugee crisis in Kosovo, which is still painfully relevant today. The casting is one of the significant changes to the way the play is usually presented, with the UK Hannah played by a young black actress, enabling us to explore changing ideas of British identity through ethnicity.

• 2nd October: Late at Tate at Tate Britain
Late at Tate kicks off the new Autumn series with exploring the idea of status and power by providing a vibrant mix of music performances, workshops, talks, special guests and DJs. The event will include a performance by The Age of L.U.N.A., a digital commission from innovative interactive media artists Jae Huh and a workshop from East London creative Kojey Radical’s project Push Crayons.

• Until 3rd October: The Etienne Sisters at Stratford East
Featuring MOBO Award winner, Allyson Ava-Brown who won Best UnSung Act in 1998, The Etienne Sisters is a brand new British production set to a contemporary jazz soundtrack that explores what it means to be part of a family today.

• 8th October onwards: A Wolf in Snakeskin Shoes at The Tricycle Theatre
Award-winning playwright Marcus Gardley returns to the Tricycle Theatre following 2014’s critically-acclaimed The House That Will Not Stand. This fresh take on Molière’s Tartuffe, set in a world of fast-food tycoons and megachurches is a wicked new comedy that rocks the foundations of trust, faith and redemption.

• 10th October: The Labels Fashion Show at The Royal Over-Sea League
An annual independent platform for designers to showcase their work to potential clients and professionals within the fashion & entertainment industry. Its aim is to inspire budding designers by helping them build a brand and a network within the industry, paving a way for their talent and skills to be seen by other creative individuals.

• 10th October: Africa On The Square in Trafalgar Square
Launched in 2014, this new festival celebrates the best of African culture from noon-6pm with a talent show, fashion show and food market along with live music, DJs, dancing and lots of activities for kids.

• 12th October: London Film Festival Sonic Gala at ODEON Leicester Square
As part of the London Film Festival and in partnership with MOBO, this red carpet event will be the UK premiere of The Idol which tells the incredible true story of Mohamad Assaf, winner of ‘Arab Idol’. Both Mohammed and the two-time Oscar nominated director Hanny Abu Assad are expected to attend.

• 14th October: The Women of Kampala at Greenwich Theatre
A one-night concert called The Women Of Kampala, presenting an evening of East African music by 5 Ugandan singers backed by a 7 piece band.

• 14th – 17th October: Frieze London
An annual art fair featuring over 160 of the world’s most exciting galleries. View and buy art from over 1,000 of today’s leading artists, and experience the fair’s critically acclaimed Frieze Projects and Frieze Talks programmes.

• Until 17th October: Our Country’s Good at The National Theatre
A profoundly humane piece of theatre, steeped in suffering yet charged with hope, Timberlake Wertenbaker’s Our Country’s Good (based on a true story) celebrates the redemptive power of art.

• 23rd October: Otello Opera Show at St. James’s Theatre
Produced by Nadine Benjamin via her company Everybody Can Opera!, this performance of Otello mix opera and jazz to encourage other cultures to join for the evening to celebrate opera and understand it is not just for the upper classes. At the moment, it will involve Nadine, Ronald Samm and Denver Smith.

• 28th October: Warehouse Fashion Showcase at Flagship Store
For the first time ever, Warehouse is handing over the Oxford Street mezzanine space to 3 MOBO fashion designers to showcase their clothing and will host an evening networking event where they invite their network of fashion insiders.

• 29th October: Safe Gorton Concert in Manchester
After winning a competition with Island records, members from the Safe Gorton music scheme perform covers of Jessie J’s songs to a crowd of over 250 people.

• 2nd November: PRS Panel Sessions in Leeds
As part of a nationwide road show, PRS for Music is hosting an industry panel event featuring a Q&A with key industry speakers followed by networking event as part of the reception..