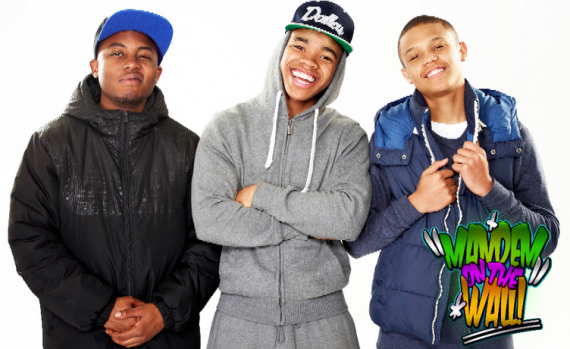 With over 40 million views online already, it will be clear what the fuss is about when you see the heaving queues outside the location as the boys take over Hackney Empire with their unique brand of humour. It’s going to be Mandem Madness!

What makes Mandem On The Wall different is purely based on comedic style, character and vision. The world of Mandem On The Wall, is based on three characters ‘Yungah Baker’ ‘Failia’ & ‘Yungah Baby Tinie Winie’ who sit on a wall and discuss events of their everyday lives, on a urban estate, but without the glorification of violence, their comedy is a mixture of social realism and flights of fantasy and musical parodies

We should care because the three characters that they have created have been inspired from key types of people within groups of friends of their demographic, targeting the truth, making their characters relatable and loveable

The comedic trio came together in 2011 after meeting at a variety showcase, ‘’Percelle Ascott and Jovian Wade performed a duo comedy sketch and Dee Kartier, a stand up comic, performed one of his well known sets. A week later after the performance, we met up and created the comedy concept of Mandem On The Wall. Within a few months we formulated our characters and scripts and released our first episode on 24th December 2011, within the first hour we received 10,000 views and as the next few months preceded the thousands of views turned into the hundred thousands and we soon hit the millions. And now after 3 years we stand as a very recognisable brand, not just a TV/online show, but also as a part of pop culture and an aim to create a legacy of entertainment in the UK, with the aim to emulate the Wayan Bros in America”. 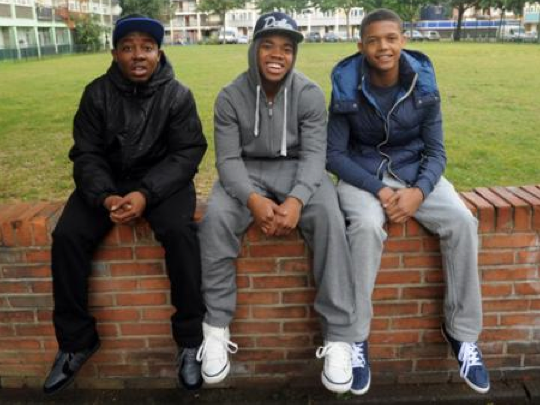 Their background is varied….

Joivan Wade, Actor/Writer, a BRIT School, performing arts and technology graduate where he attained a Triple Distinction in his BTEC in Performing Arts (Acting). Also received training via The National Youth Theatre and D n B Theatre School. Joivan was selected out of thousands of individuals to take part in the Ensemble as part of the International Student Drama Festival.
Percelle Ascott, Actor/Writer, also a BRIT School, performing arts and technology graduate with a triple distinction BTEC National Diploma in Theatre (Acting). He has also worked with the BBC, the first being Excluded part of the BBC 2 Schools Season, which aired on 21st September 2010; Silent Witness as a leading character Joel Barron which aired on the 8th-9th April 2012.
Dee Kartier, Comedian/Writer, first hit the stage at the age of 16, performing at comedy clubs around London (i.e. Choice FM comedy club) and later on began to take on the rest of the U.K. performing alongside British comics such as, Eddie Kadi, A Dot, Kat, Paul Chowdhry and many more. By the time he was 19 he had developed his own unique style and brand of comedy. His humour stems from his experience as a young Ugandan boy growing up in Peckham (South London).

They tell me ‘’We stand for being pioneers in the transition of talent from the online world to the TV and film world, taking risks and pushing entertainment into the social media age, we stand for being role models to our demographic from as young as 7, showing them that with planning, executing ideas and perseverance you can do whatever you want, we stand for creating opportunity for ourselves and for those who lack opportunities in the entertainment industry, we are the voice of BAME (Black Asian and Ethnic Minority) youth”.

Of course, with the election coming up in May, I grilled them about their points of view;

Percelle Ascott says…
Do you vote?
I haven’t personally voted before, but the upcoming election I am looking to change that, but not only change that for myself, but to invoke that change in more young people like myself. With our voice and following we don’t just have to, but need to, as politics are the core fuel for what affects everyone, no matter a persons background or environment. It’s not that we don’t care, but we are not all aware, so someone like ourselves can help change that

Why/why not?
I haven’t done so, as I had taken a route that I regret, but I had given up that I can make a difference and be heard! How do I know my local MP will hear my worries and concerns and take that as serious as I would, if they don’t understand my perspective? After all, what is the general age of most politicians? However, like I said, my thoughts on how I approach politics have changed. A motto that I live by, is ‘Be The Change, You Want To See’ with the power of social media, we are looking to stir frenzy, in hope it can shake up how we all view politics.

What should politicians do to engage with young people/ black communities?
The problem has been, politicians placing blame upon people who do not register to vote, we shouldn’t be demanding their attention, they should trying to engage with us.. key word ‘TRYING’ to put it plainly, if you do the same thing expecting different results… that is insanity. My community will not listen unless you prove to them you care, I’m sure that is very general across all communities, I am not a politician or neither an expert to now suggest methods of how to do it, but if it’s only caring at a period that suits you (campaigns for the lead up to the general election) then you’re doing it wrong. Change is happening everyday; we live in a new age, a social media age, maybe enlist the help of influential people that young people listen to. We have friends that are way more powerful with the demographic they are trying to target, maybe it’s time to accept that you do not hold all the answers and ask for help. After all, democracy is in the shape of teamwork

Why should we care about voting?
Like I mentioned previously, change is happening with or without you, and if you have an opinion that you would like to express, we can only keep trying to see that change by voting. With every election happening every 4 years… 4 years is a very long time to have to accept policies you may not like, people in the past have died in order for us to have the freedom to vote, so let’s use our opportunity to make some real change

Which party best stands for what Man Dem On The Wall stand for?
None. Unless our beloved characters were to create their own party and run for government then maybe there would be one. But as for Joivan, Percelle & Dee (The actors behind the characters) we will be choosing very wisely, so let’s see how the next few weeks pans out

Joivan Wade says….
Do you vote? Why/why not?
I did vote, the reason why I voted was not because I necessarily understood politics but because i was encouraged by my mum to vote based on the fact that the elections would effect me and the way we live. I think its important to vote, essentially we control what our government looks like. the only way we give up that control is by not voting, which is why its imperative we vote and encourage others too as well.

What should politicians do to engage with young people/ black communities?
Politicians should first lookout schooling system everything is grass roots so it starts from the school system, in order for people to act, they need to care, they need to understand. put it in terms relatable with the kids things they understand and care about, (lack of EMA and rising travel fairs) this is also politics but at a level young people can understand. also this is a social media generation so social media campaigns role models young people look up to and can identify with will be useful in the pursuit of engaging young people.

Dee Kartier says…
I don’t vote because I don’t feel there’s a party out there at moment willing and strong enough to fight for the needs of my community. Number 10 is full of old white men in suits. This doesn’t make young people like myself feel like any political party is even going to empathise with anything we go through. So why on earth would they fight to eradicate a problem, if they don’t believe it exists? In a nutshell, parliament needs to reflect the image of today’s Britain.