Okayyyy, we all know that the world is now digital.
Millennials have taken the digital baton and sprinted ahead with it, doing for themselves today what was once impossible.
Used to be that the establishment and old skool gate-keepers would decide who, what, when and why things would happen.
Nowadays the current generation of young people are building their empires online via their own special style of disruptive marketing.
The internet and digital movements have opened up a world where anyone with a it of tech-savvy know-how can make it and the industry this is most apparent in is music.

Music is the most widely watched content type among 12-15 year olds on YouTube, though YouTubers like Zoella and KSI are becoming the new pop stars for Gen Z

Music record labels, PR teams, radio playlists and event management teams have been forced to look at digital platforms and work alongside them instead of competing with them.

The report found that teens value video platforms for music discovery and social engagement, but, as they develop as music consumers, look to audio streaming services and are more prepared to pay for music

Also, the report for BPI/ERA explores the music consumption habits and social media behaviour of today’s young Millennials (aged up to 19) and how their engagement across streaming and video platforms and social media and messaging apps, including Instagram, Snapchat and Musical.ly, is shaping longer-term trends.

It finds that YouTube still dominates in the social media space
The research finds that for today’s tweens and teenagers YouTube is a pervasive platform – not only for new music and content and access to influential YouTubers like Zoella, but for social engagement also. YouTube plays a key role as “a video destination, music app, social platform and educational resource rolled into one”. 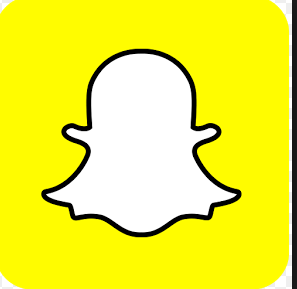 Similarly, messaging apps have replaced social networks…..
Messaging apps including Snapchat and Instagram are becoming increasingly important, replacing social networks for Generation Z and enabling them to act on their impulse to “live in the moment” and “narrate their lives”. As such they help build engagement around music and artist profiles.

More recent apps like Musical.ly and Dubsmash – video social network apps for video creation and messaging – are also growing in popularity. This is in part due to a rate of app innovation that is accelerating thanks to the “Millennial feedback loop” of older millennials shaping app experiences for the younger Gen Z.

But Spotify dominates music space and drives discovery…
The research additionally shows that, as teenagers develop as music consumers, they are likely to be drawn to audio streaming services such as Spotify, Deezer and Apple Music. For those aged 16-19 Spotify is overtaking YouTube as the main music app, with 53 per cent weekly user penetration compared to 47 per cent for YouTube.

This helps to underline another finding highlighted in the report from previous MiDiA research showing that younger consumers (16-19 years: 67%) are more prepared to pay for music than other age groups (56%).

Streaming is, however, also transforming UK Teens’ relationship with music, with Millennials increasingly accessing individual tracks or playlists rather than engaging with artists or albums See LINK XX to full report and key summary findings below.

Geoff Taylor, Chief Executive BPI & BRIT Awards, said: “If we are going to prepare for the future of music, we need to better understand Generation Z and the influences that shape their engagement with music. These young digital natives are not only important as a key segment of the market, but the way they interact with music helps to unveil trends that will become more widespread among music fans over time.”

Kim Bayley, Chief Executive ERA, said: “It’s not news that entertainment is changing, but none of us should underestimate the achievement of the streaming revolution. Not only has it helped stop piracy in its tracks, it has created the first real growth in the music industry in more than a decade and has done so with an unbeatable consumer proposition: 24/7 access to virtually all the music in the world. In the fast-paced digital world, however, nothing is forever and it is vital to stay close to emerging generations of music fans, many of whom were not even born at the dawn of the MP3 age.”

· 85% of 16-19 year olds say that music is an important part of their life.
· Authenticity, relevance, shareability and context are key to Gen Z.
· YouTube is the most pervasive entertainment platform for Gen Z, peaking at 94% monthly penetration among 16-19 year olds.
· However, for these 16-19 year olds, as interest in music develops, Spotify is overtaking YouTube as the main music app, with 53% weekly user penetration compared to 47% for YouTube.
· Music is the most widely watched content type among 12-15 year olds on YouTube, with YouTubers such as Zoella (11.8m subscribers) and KSI (16.1m) becoming the new pop stars for Gen Z.
· UK teens (16-19 years) are more willing to pay for music. 67% consider it to be worth paying for regularly compared to 56% of overall consumers.
· A third of 8-11 year olds in the UK use Snapchat, rising to 67% for 16-19 year olds, while 63% of 16-19 year olds use Instagram.
· Messaging apps like Snapchat and Instagram are replacing social networks for Gen Z.
· Among 16-19 year olds YouTube and social media unsurprisingly dominate, with much higher penetration rates than the overall population.
· Streaming is transforming Gen Z’s relationship with music: 74% of all 16-19 year olds say they are mainly listening to single tracks and playlists instead of albums.
· 71% of 16-19 year olds listen to music radio on an at least monthly basis, just 3 percentage points above the all-ages average.

Table 1: Weekly use of music apps by UK teens (compared to all users average), December 2016 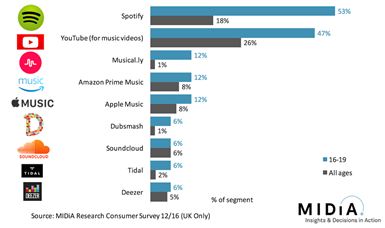 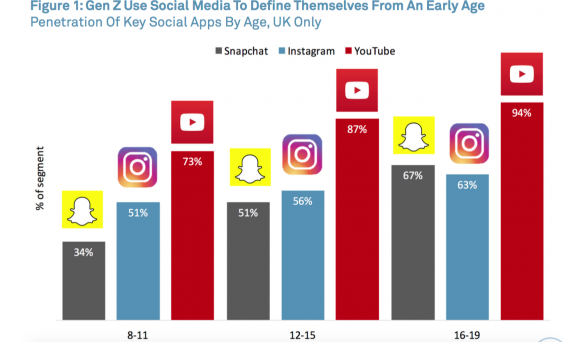