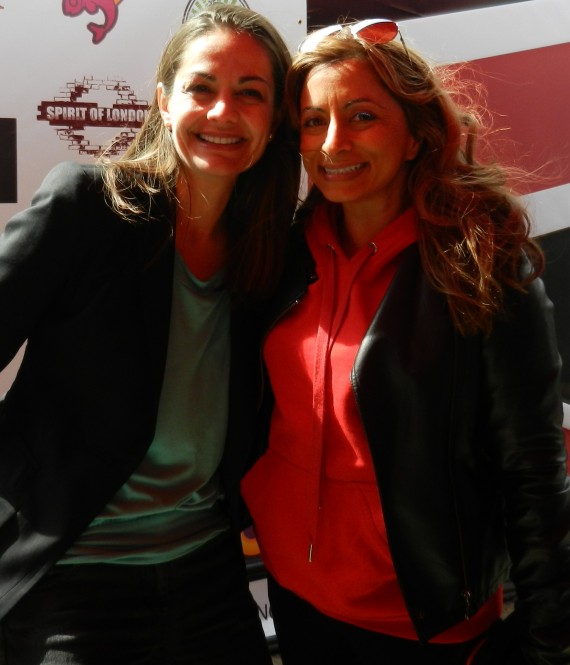 JASMINE WITH SIOBHAN BENITA – ON MAY 3RD SHE GETS MY VOTE!
April 14th came and all roads led to the ministry of sound in Southwark for YOUTH VOTE LONDON where London’s mayoral candidates Siobhan Benita, Brian Paddock, Ken Livingstone and more came out to meet and greet and talk to the resembled young people. 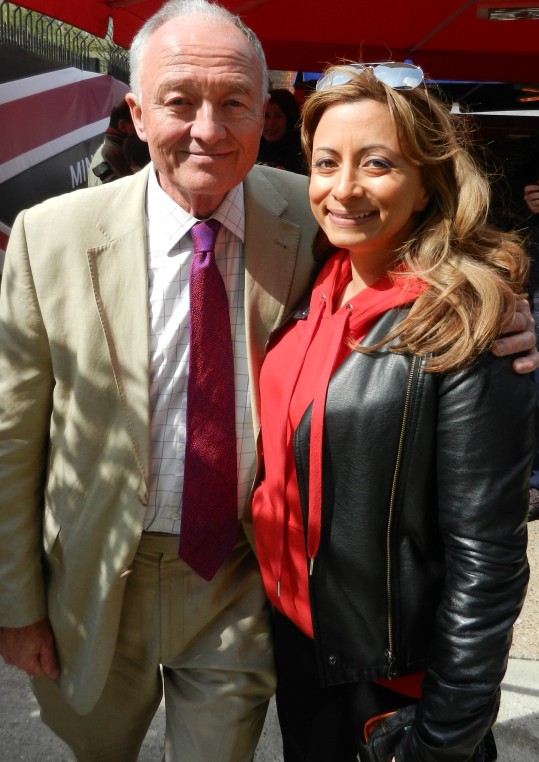 JASMINE WITH ”RED-UNCONNECTED TO THE YOUTH” KEN.
The stage was hosted by spoken word artist dean Atta, mtv/choicefm’s kat and other ambassadors from the sprit of London awards, uprise and represent radio.
The red carpet was outdoors and saw a huge branding board with all the logos of all of London’s big youth organisations like Live / Livity-Somewhere To…, Catch22, lives not knives, enthuse youth, enterprise lab, press for change and more emblazoned across it where celebs were all clamouring to be snapped by the papps. 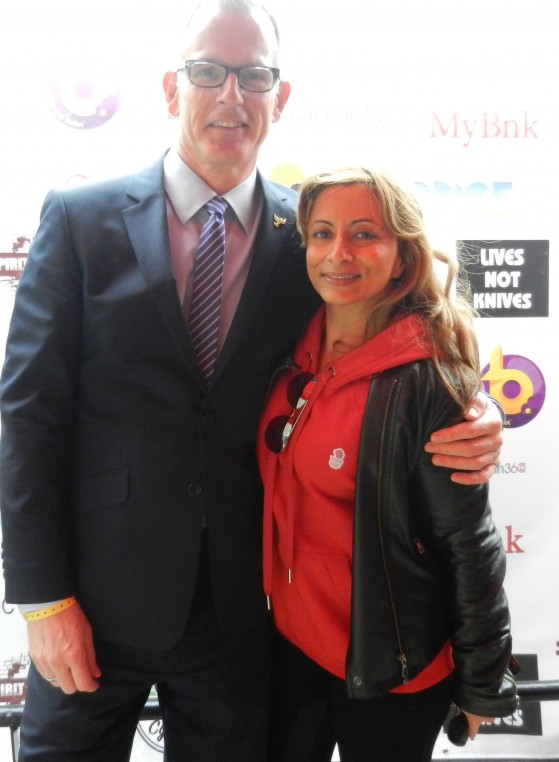 JASMINE WITH BRIAN PADDICK- A VERY NICE INFORMED MAN!
Many of these youth org’s also had stands inside where youth could get engaged and on board with the hundreds of initiatives that are on offer to London’s young people- who said there’s nothing out there for them? There was so much I couldn’t keep up! There were voting booths and ballot box’s teaching youth how to physically make a vote, there was a stage where dj’s and music acts were all interacting with the crowd and the outdoor area was awash with networkers and politicians. 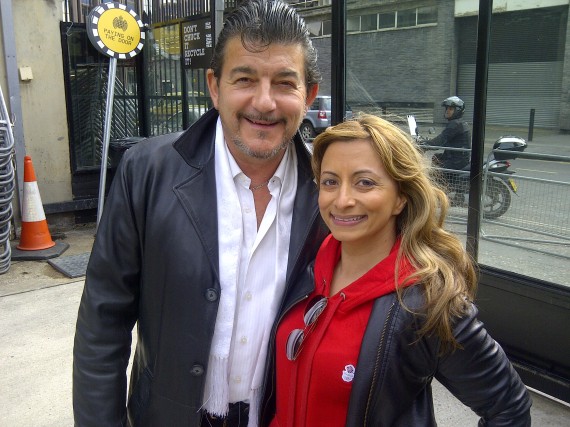 JASMINE WITH EASTENDERS ‘NASTY NIC’-NOT SURE WHAT HE WAS DOING THERE? (AND I DONT THINK HE WAS EITHER LOL!)
Of course socially aware pro-social music star Sway attended as did West London act princess Nyah (who came to speak to the kids and did a freestyle too) and comedian Kevin j who spoke to the bloggers and press about why young people should use their vote to make a change for themselves.
Bizarrely ex eastenders actors nasty nick cotton and actress Tanya franks attended too. All the candidates arrived sporadically during the day so when Siobhan and Kev arrived most of the youth were on the red carpet interviewing and snapping away at them. But then they all relocated indoors to hear them speak so that by the time poor Brian Paddick arrived there were minimal red carpet press and I think he didn’t feel any love. poor guy.
Tory affiliated Shaun bailey was heckled a lot for speaking ‘’on behalf of the African Caribbean community in the uk’’.
Siobhan Benita got the most cheers and applause and talked about issues that the audience all really seemed to feel and broke out into spontaneous applause for. I wish Siobhan had started her campaign earlier as I think with the right championing on board co-signing her she could have actually made a dent. I will still be making my first vote Siobhan and my 2nd Boris. Siobhan is mostly definitely filling a gap by speaking for the under represented young of this capital city but Boris has always honoured his commitments by the policies I have felt an allegiance for and unlike Ken does care what the people say in my humble opinion.

Next an old friend, ex SonyBMG head honcho Mervyn Lynn called to see if I wanted to bring a group of friends along to the very swanky prestigious LAWRENCE OLIVER AWARDS. 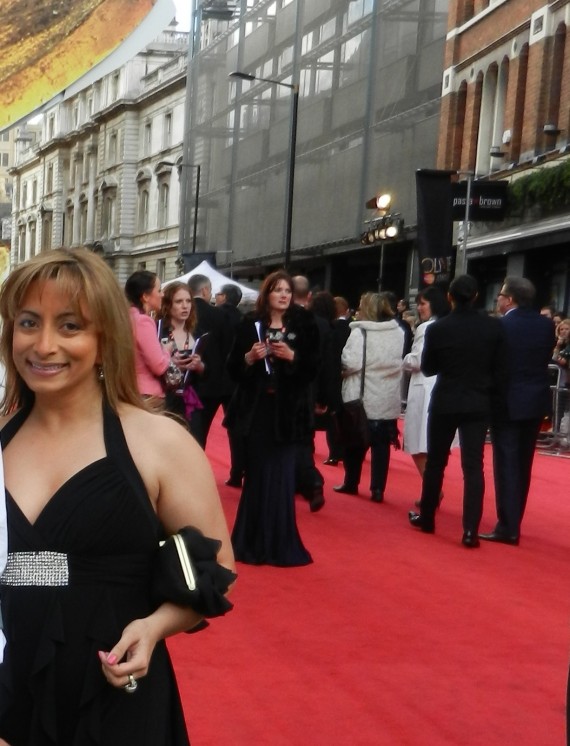 JASMINE ON THE OLIVIER AWARDS RED CARPET PRE-SHOW WITH A SUPERSTAR THAT SHE’S HAD TO CROP OUT FOR SILLY REASONS.
The Olivier awards honor achievements in London plays, musicals, dance and opera. Winners in most categories are chosen by a panel of stage professionals and theatergoers.
Now whenever folks ask things like this I always look at my phone quizzically? I mean? Is the pope catholic? Is the British sky grey? is puff daddy the richest rap icon 2012? Of course I played nonchalant but was inside jumping up and down with glee. However many years I am in this industry every invite is an honour and I never take any for granted. It a blessing to work hard and play hard in this game. And Mervyn has always worked so hard-its nice to see nothing changes as he was still working lol. So I scooped up a few of my nearest and dearest (after a very OTT drama about whether one of our male friends had left his black tie outfit at his country house) and there we were walking down the longest, poshest most fabulous red carpet I’ve seen this side of the Atlantic. Make no mistake-this night at the royal opera house was about the biggest names in theatre and stage. The fact that a whole road –Drury lane- in Covent Garden was rolled over with plush red carpet was testament to the fact.
As we walked the practically 100 metre long red carpet at every turn of the head were TV crews, walls of paparazzi and household name celebs being interviewed. It was so exciting to run shoulders from the bigwigs of a parallel world! It was, as the OLIVIER AWARDS sponsors Mastercard always say ‘’priceless!’’
What I didn’t mention to anyone was that a mate and I had just jumped out of our jeans and into our posh frocks in the royal opera toilets and luckily had managed to dump all our clothes and bags in the cloakroom after sneaking past the backstage security guard, otherwise we would’ve had to have carried bags and coats down the red carpet and that my dears would have been frankly mortifying!
So we’re in! (Said like a bank robber that just snuck into the World Bank). The liveried doormen check out our tickets and directed us upstairs to the bar where we are surrounded by other fabulous folk in black tie and gowns and we sipped champagne.
Darlings I must mention that all theatre functions are a hoot to attend. When you see a ‘’black tie’’ instruction on an invite in the music world, to many it’s about flesh baring usually vulgar outfits that leave hardly anything to the imagination. Every theatre event I’ve ever attended I don’t worry about a fabulous frock. Theatre folk like quirky, eccentric outfits. They’re all uber creative people who wouldn’t be seen dead in a boring old frock from your average designer. They like to stand out and show off their uniqueness. So knowing I couldn’t compete with that I wore the most formal black floor length ball gown that I own lol.
We were soon ushered into our seats and eve though I’ve attended ballet performances many a time at this venue back when I was studying for my degree I still took a breath as I looked around at the breath-taking architecture and glitz of the auditorium and wondered at the fabulous theatre history and tradition in this quite recently regenerated building.
Before you knew the show was off to a very fitting start and from here on in 3 whole hours flew by in a magical blur. We had performances from practically every west end musical to entertain us in between the awards categories. These included performances by We Will Rock You featuring Queen guitarist Brian May, Ronan Keating and Kimberley Walsh singing No Matter What, Siobhan McCarthy and Maria Friedman coming together in tribute to Tim Rice and Elaine Paige rolling back the years to captivate the Royal Opera House with Don’t Cry For Me Argentina. It was breath taking!

Furthermore, name after name just kept popping out onto stage as the already ultra fab attendees even gasped at certain names who included Stars from the worlds of film (James McAvoy, Jonny Lee Miller), television (Zach Braff, Jack Davenport), music (Will Young, Ronan Keating) and theatre came together to see the prestigious awards handed out.
Matilda The Musical – The musical is based on Roald Dahl’s tale of an extraordinary little girl from an ordinary family.-created history, winning seven awards, more than any show has ever won before-so of course you know my next mission is to try and beg, blag or hustle tickets for this asap!
Also among the accolades the RSC production picked up were Best New Musical, Best Actor in a Musical for Bertie Carvel and Best Actress in a Musical for the quartet of young stars playing the title character.
One of my favourite highlights was a performance by The Royal Ballet from Wayne McGregor’s Limen to mark ballet goddess Dame Monica Mason’s Olivier Special Award,
In summary, we laughed, clapped, sang, jumped around in our seats with excitement all evening. Even the interval was fabulous as we were served champagne in our seats!
Oh the good life lol. Post show we were guided into the reception where an abundance of starters and small bowls of scrumptious food were served-our fave? The sausage and mash! The drinks continued flowing well into the early hours as we chatted to the big and bold of this world that were so open to strangers speaking to them. Acting celebs were happy to chat, mingle and pose for pics with all the attendees. There were no haughty, awkward folks-in fact a much nicer crowd that the music world which can be very egotistical. In fact, its refreshing to see an area that many think is inaccessible to ethnic minorities and others minority groups that is so openly embracing. I know a lot more minorities enjoy the theatre now than ever before with so much focus being put on the arts so this can only get better.
Ball gowns, champagne and theatre world luvvies…..just another day in the life of a media hustler- and the Diva Dotiwala Diaries.