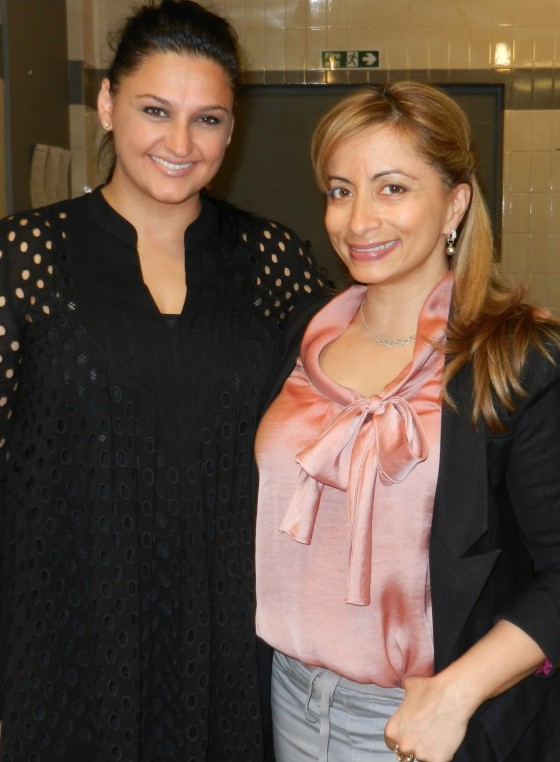 JASMINE WITH KIRAN SHARMA!
Londoners! Its Voting day! I will be making time today to go and vote and make my voice and existence stand for something. I have relatives in countries where people die to fight for their vote and voices to be heard and spend hours queuing to make their cross on a ballot paper to bring in their leader of choice. Think I’m going to take this for granted? Hell no! Today I will vote! So many whine about their lives, the government, politicians and their community but when it comes to making a stand and being counted if you don’t vote- you have no right to complain.

After voting I’m popping down to OHTV to be a TV panel guest alongside MP Dawn Butler where the theme is…. you guessed it-voting LOL! (To be honest I’ll be glad when this London Mayoral Election is over- YOUTHVOTELONDON did sign up 600 new young voters so it’s a slower start than I’d hoped, but at least the car has pulled off the kerb. I dream that the momentum and understanding will grow until we have an Obama to call our own.

This week when I haven’t been yelling at the politicians in live TV studios, I attended a UK premiere of The Price of Kings: Film 2, Shimon Peres, and a 21 year celebration to mark the success and nostalgia of the old BBC ethnic sitcom –the Real McCoy.

I also caught up with a very understated lady who I think should be brought to your attention. Her name is Kiran Sharma and she is one of the movers and shakers that make the music industry run at a higher level.

Kiran has worked on all manners of music events and books artistes for everything from spectacular private parties to festivals and concerts, through her company, KIKIT Entertainment. She is also the manager of Prince. Yes, you read correctly. The legend that is Prince Rogers Nelson; the American singer, songwriter, musician, producer and actor.

Kiran was shaped early on by her days in her birthplace of Luton, which was “a bit rough and tough”, until she was eight. At the age of nine, due to her father’s work commitments, the family moved to Norwich which she recalls as being completely different. ‘’At that time ethnic minorities in Norwich made up a tiny percentage and there was hardly anyone to relate to. I was the only Indian kid in my school and got bullied for a couple of years.”

I imagine it’s this early need for self-defence and survival that has made Kiran into the tough cookie and astute businesswoman she is today. She could just as easily have turned into the bullied underclass, but she didn’t let it subdue her. She fought, toughened up and grew to be a bit of a tomboy.

So this early grounding shaped her character and she’s able to roll in the best of both worlds and adapt to all societies and circumstances.

Due to her traditional Indian background, Kiran’s education was more academic and less artistic. She was expected to get a corporate job, so did an engineering degree majoring in marketing “to please everyone” although she would have preferred to do art.

After graduating, Kiran worked in a very corporate environment and despite enjoying the challenge, she decided it wasn’t really for her and went through all the career stages as fast as possible. From being a marketing assistant for a small magazine to account director for an international marketing agency, Kiran ticked all the boxes for her parents and peers before casting her career net even wider.

She explored how she could merge her knowledge of business with her love of music and the arts. She knew that one day she wanted to work with established artistes, but had no expectations and just took the plunge to launch KIKIT Entertainment in 2005.

For two years she worked two jobs simultaneously, working her day job until 6pm then working on KIKIT until the early hours. She admits she had no time for relationships and family, but her time was well spent as she was so passionate and was having so much fun working on building a future, which would make it worth it. ‘’I was working with acts that had been in the industry for over 20 years and got to learn loads from them,’’ she enthuses her eyes twinkling with memories.

Of course I had to ask Kiran why she thinks Prince gravitated towards her in a business capacity in this later part of his career. “Well you would have to ask him that,” she judiciously responds.

She went on to explain that she first met him when she booked him for a London event, but that they didn’t even talk, (lesson 1, ladies — no groupie behaviour!), but eventually that all changed. “I was touring with Maceo Parker briefly and we met a few times backstage, but it was a friend who finally introduced us.”

TV companies and magazines really should be focusing more on characters like Kiran. Features about how a small town girl grows up to manage one of the biggest names in the world? The challenges of running a multi-million dollar business? How to earn the respect of male-peers? Its only logical as Kiran is one of the few higher ranked women to achieve success in the music industry.

“Everyone has this perception that successful women are hard-nosed. I realised that just being myself worked for me,” she tells me with a smile.

She knows that her ethnicity has of course aided her career and life values. ‘’My background and ethnic values mean I understand the concept of total respect for all people,” she says.

“Indian people tend to have a respect level for all other cultures and ultimately respect hard work. These things are instilled in us at kids. My granddad used to say to his four daughters, ‘I can’t give you a house or money, but I can give you an education. No one can take that away from you.’ Close family helps too. If I needed support tomorrow I know my family are there. It makes everything a little less scary.”

As with many big power players, Kiran’s attention to charity and giving back plays a dominant part in her work. Many of her music acts began performing at charity events like Save the Children and Kiran became increasingly involved in various campaigns. Today, she a trustee of Arms Around a Child, which supports kids affected by HIV and AIDS in India and Africa and builds orphanages for abandoned children.

Kiran has also been nominated for Entrepreneur of the Year in the Asian Woman of Achievement Awards 2012, which takes place on May 16 2012 at London’s Park Lane Hilton.

“Its great to be nominated alongside these women. The Asian Woman of Achievement Awards is such an important platform for British Asian women and I am hugely honoured to be shortlisted alongside such exceptional ladies. I met a few of them recently and they’re all fascinating and I felt proud to be in their company. One thing in common we all had was our similar experiences as women of Asian background. If you can come out of this industry doing something you love and can sustain your lifestyle, and you’ve managed to do it in a way that’s respectful to you, your culture and all around, then its a winning situation.”