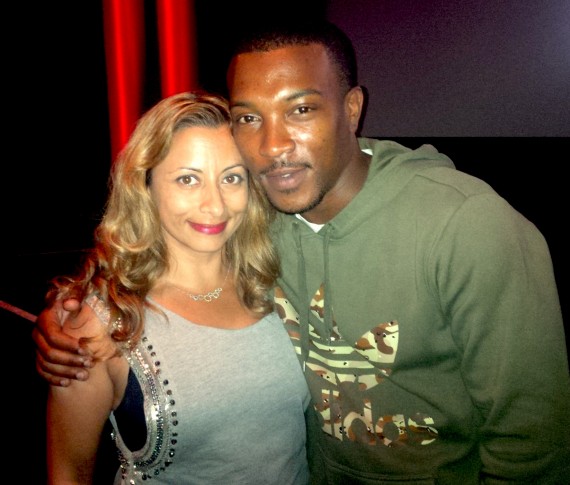 Channel 4’s gritty mini series Top Boy, returns this month with its second series. A mind-blowing ratings success for the broadcaster, its lead characters Dushane and Sully are back with their daily grind, about inner city life in East London.

Series 1 had the fans praising the incredible cinematography (continued by director Jonathan van Tulleken in this new series), as well as the really real story line. It also had its critics citing glorification of gangs, drugs, black male stereotypes and violence. Many middle classed journalists actually questioned the storylines and suggested they were unreal and exaggerated. That’s the golden nugget right there. To many, this is fiction that they refuse to believe is happening mere meters away from their own doorsteps. To others, this storyline is their day-to-day reality. Every neighbourhood in London has its ‘’pharmaceutical warring areas’’, even the more affluent locations. Notting Hill and Holland Park have Ladbroke Grove, Canary Wharf has Hackney, Hampstead has Kilburn, Dulwich Village has Peckham and on and on and….

If you grew up in London, then you can relate to every storyline and character in Top Boy. The mentally ill mother leaving her son to raise herself, junkie parents that are so desperate to earn a living they resort to illegal activities, the excluded student paying bills by selling weed, the Chinese men-not just known for selling DVDs in the hood- but having the best weed, the bullied child wanting to fit in and be a part of the crowd, the parentless kids who need a sense of family so fall into the arms of the local gang. All of these, an everyday reality for many. Other untold stories are even more tragic. 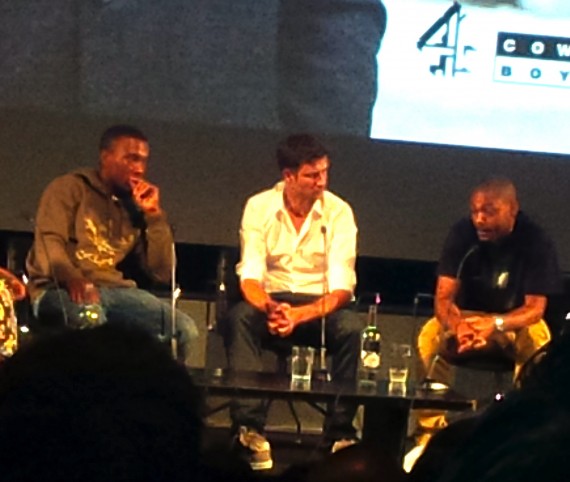 THE TOP BOY PANEL DISCUSSION POST SCREENING AT THE BFI

One of the reasons Top Boy has been so successful, is that it’s not simply a shoot em up gangland visual fest. It’s an extremely well written drama by Ronan Bennett, which has also been nominated for a BAFTA. In series two, life on the Summerhouse Estate comes head-to-head with the world of organised crime, property development and corporate greed – and the police start to close in on past crimes committed. One of the criticisms of series one was that there was no police presence in the drama. Oh the irony! In reality, this façade takes place across inner city neighbourhoods daily, and there tends never to be a police presence tackling it! So series one was actually nearer the truth than acknowledged. However, Top Boys writers did address that point and series two immediately shows a much stronger police presence in the storyline from the jump off.

Another area, which is more balanced, is the notion that criminal activity at this level is never just made up of fully black youth. Watching series one you may have thought that the case, however series two brings in the Albanian gangs, the Chinese weed barons and a more diverse, realistic reflection.

Screen one at the BFI was sold out on Monday night as Channel 4 and Cowboy Films held a screening of the first show from series two, and it stood up to being just as gripping with its storylines unfolding cleverly from scene to scene.
After a rapturous applause for the cast and crew, the two main characters Dushane and Sully, played by actor/musician Ashley Walters and music star Kano took part in a Q&A session with the director and a moderator. 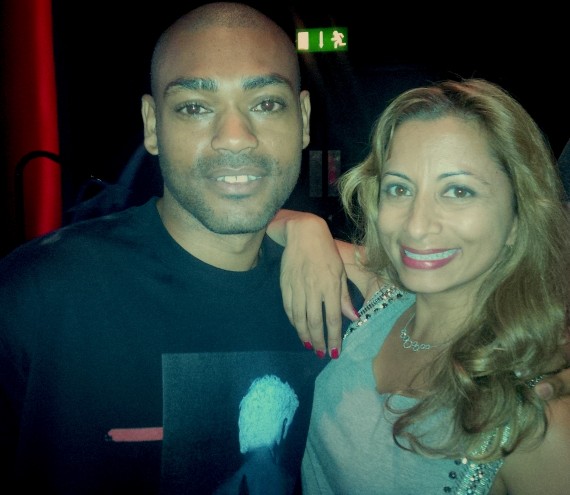 Kane Robinson, known to his music fans as Kano admitted that with so many people constantly asking him if the drama was returning there had been some nerves returning and wanting this series to be as strong as its predecessor. Director Jonathon enthused “its a gift to get given a show that’s so amazing I had to make it as good as series 1”. Ashley, known to his music fans as So Solids Asher D, added “we were so keen to return we happily shot in winter in the snow, it was tough’’

What was it about season 1 that gripped people? Ashley seems to be as flummoxed about its success as many others and attributes it to good timing. ‘’We as a nation were depressed. We’d had the UK riots. Tensions were high, especially in London. The show had captured everyone’s desperation and frustration. Kane and me asked ourselves whilst filming all through series 1 “will this ever make it to air on channel 4 or get sold cheaply to channel 5!”
Kane added-‘’a lot of people could identify with this. For others it was an eye opener. Seeing Ridley Rd Market in that context for a lot of people is scary’’.

Ashley was obviously displeased having to defend the storyline and drama in regular interview’s with the mainstream press ‘’. We don’t question Only Fools and Horses about sterotypes, why do they question us? We all know it goes on. It’s the first thing I’ve done that I feel is really real. We worked on the script to ensure it was as realistic as possible. ” Between myself and Kane We’ve already done 28/31 years of research so know how real this storyline is! ‘’ 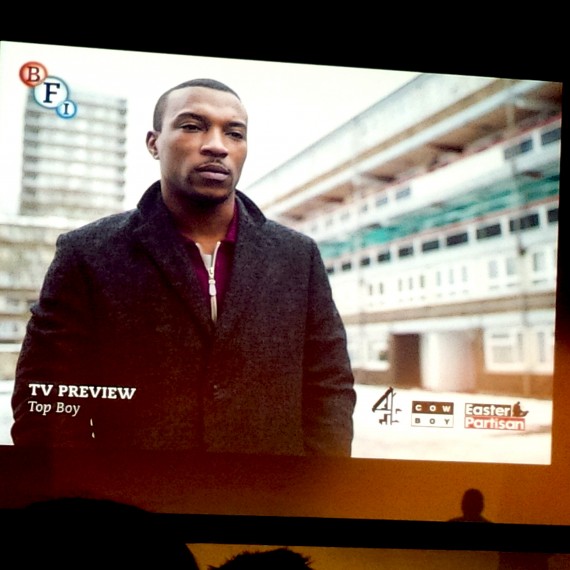 Asked about how much fun compared to his other roles, acting the part of Dushane was, Ashley admitted “I love being on the show but my characters boring compared to Sully. On set the others are fighting, shooting and doing stunts. I’m always the big man on the phone going ” where u at LOL?”

The great thing about urban culture in the UK is, that since our British music acts started charting successfully, youth have aspired to musical directions. Similarly when urban comedy started making a name for young urban comedians like Eddie Kadi and Kojo, youth were shown another road to success. Nowadays with leaders in their fields like actor/director Noel Clarke having proven that urban dramas work commercially, Top Boy is a whole new platform for new, young acting talent. Watching series two, its clear that there are even fresher, new faces than before. Young Brits being given roles that haven’t acted before. (You may recall the pandemonium in Hackney a few months ago at an open audition where hundreds gathered desperate to get their first big TV break)

Director Jonathon added ‘’Cowboy films gave me a lot of power to cast series two. We had too many good people to choose from. Music acts Bashy and Nolay and Roxanne are still to make their Top Boy debuts.

The director also revealed that many of the scenes are improvised so that the youngest actors don’t sound as if they’re reading lines. This makes for an even realer script and slanguage within the show. It also leads to a variety of comedic one-liners that weren’t anticipated. Kane actually burst out laughing at one scene, which apparently wasn’t meant to be funny when shot, but had a classic comedic moment as the whole of the BFI chortled loudly.

Of course, the music journo’s were keen to hear when we could expect new music from both the lead actors-if ever… Kane offered “I’m in the studio now finishing up my new music. I started enjoying the acting halfway through shooting season one, I found a love for it and if the right film script came along I’d consider it’

Ashley, who seems to be onscreen acting in a new drama or film regularly, was more realistic about his endeavors back to the music industry “its difficult juggling music and acting. Sometimes the music world can be very unforgiving. I’ve made some very bad publicly seen decisions in the past that I’m still paying for. I can’t consistently put out music with my acting and kids. You have to focus on music to make it really work”. Ashley also explained why he loves acting in TV more than the film world citing “TV is better to development a character for me than a 3 hour film”

Asked about his own transformation from criminal to screen star Ashley admitted “everyone has a moment of enlightenment. The hardest thing was for me to turn my back on some people that were in my social environment. I wouldn’t ever tell anyone what to do, for me it was watching my father die, prison and needing to feed my children that were life changing moments”

You can just imagine how much fun filming a drama like this must be. Director Jonathon described it as the type of fun that soldiers have in the trenches together, but you can see the banter and camaraderie between them all is strong. Throughout the Q&A session Kane would regularly heckle Ashley. A particular stand out moment was when Ashley mentioned he had “dabbled” in this Top Boy world as a kid. “Dabbled!!?” Kane loudly questioned much to the audience’s mirth.

One of the strongest elements of the way Top Boys shows are structured are the Eastenders cliffhanger endings at the end of each episode. Director Jonathon said he was aware of how powerful these had to be to bring the viewer back gagging for more. And they are gagging. The Internets been trending #TOPBOY throughout its first run and will no doubt be bigger, better and stronger than ever on its second outing. Be sure to tune in. its not the prettier side of life, but it is happening right here, right now. Ignore the realest reality show on TV at your peril.