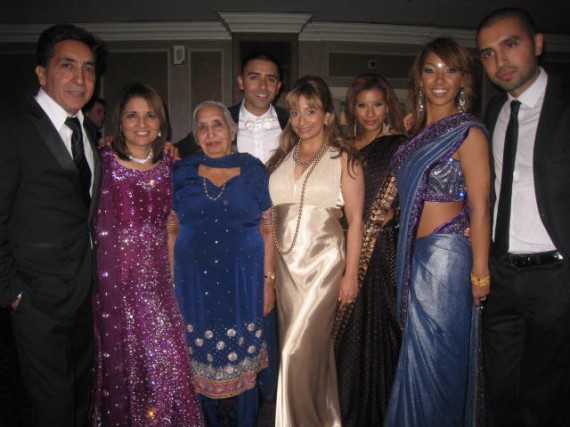 I was late for the Asian awards. I was supposed to arrive at the great room at the Grosvenor House Hotel by 6pm. at 5.55pm my reporter Tom, called as I was having a 12-minute power nap and had over napped. Like a bat out of hell I raced to my wardrobe picked the first long frock I saw as the dress code was black tie or national dress, threw it into a bag with heels and accessories and legged it out of the door. I raced up the motorway, parked at the hotels back entrance and was whisked down to the make up room where Abbi Rose and her highly glam make up team were ready to give me the total make over experience. I sat in Abbi’s chair at 7pm and was done by 7.20pm as all hands on deck were poking my barnet and face. It was a tougher job than usual as I had brought along an extra guest that Abbi wasn’t expecting- a big, sore red spot on my cheek. ‘‘Don’t worry she reassured me-we’ll cover it’’. I love Abbi’s make up room- full of black clad glamazonian make up ladies all conversing a la ‘’only way is Essex’’- pure entertainment whilst getting glam!.

Once given the over haul I rushed into the red carpet area where celeb’s were falling over each other as they backed up for the TV crews. It was a mouth dropping visual moment where hundreds of stunning olive skinned beauties in full sequined, satin-ed, bling-ed out jewelry and flowing long ball gowns in jewel colors were flitting about everywhere clinking their champagne glasses. This is why I LOVE Asian events! The gene in me that loves sparkle and colour can let loose! Honestly-I’m like a magpie-blame my Indian mum! In its 2nd year this years awards were supported by luxury brands; Bulgari, Christian Louboutin (who attended in person), Quintessentially, Audemars, Piguet ,Meridian , Audio ,Lloyds Banking Group and Smythson’s. The night attracted some of the wealthiest and most successful Asians on the planet and covered 14 awards on the night.

There was a charity auction in aid of Save The Children, which was the most fun to witness. A room full of millionaire Asians all trying to outbid each other is fascinating. Prizes for the Live auction included; a Signed Ferrari Opus-, a Private Travel Lot (Private Jet, 5* stay, Maserati car for the week)-, a Stay in a Campbell Gray Hotel, a trip to Antigua or Lebonon with a luncheon with Mr Cambell Gray himself-, Amir Khans boxing glove’s, Opera Tickets-, a1 day visit and meet and greet with the cast of Emmerdale-, a Signed Arsenal shirt, a personally couture gown and Christian Loubotin Shoes and much more.

There were an overspill of VIP’s attending that included (take a deep breath-this list is abundant!)…..Russell Peters – Comedian ,Meera Syal – Television actress and writer, Jay Sean – Singer, Amit Singhal – Head of Search at Google, Murali – cricket player, Anand Mahindra – CEO of Mahindra, Irene Khan – Sec Gen of Amnesty International, Asha Bhosle, Anoushka Shankar, Freddie Mercury Family (mum, sister and in laws), Brian May and Roger Taylor – Queen, Cliff Richard, Boris Johnson – Mayor of London, Nina Wadia – Television actress, Gurinder Chadha – Director, James Caan – Entrepreneur / Television, Kiran Sharma – Manager of Prince (the artist), Christian Louboutin and me LOL! Most of the VIP’s were millionaires, in short I felt like a Big Issue seller amongst them all! As we were all seated at our tables it was stunning to take in the glitz and opulence of the venue.

I’ve been to hundreds of up market events over the years but I can truly say the Grosvenor Great Room is in an opulent league of its own! The stage looked stunning with huge film screens and coloured podium. The table centerpieces were alternately chandelier candelabras or long stemmed red flowers. The over flux of always hovering waiters, were offering drinks of any choice all night- an 18 year old aged whiskey was going round and round-so were most guests heads after a while. The service and quality of food was outstanding and put many a recent function I’ve attended to shame. The starter was a salmon and prawn delicacy. Main was a full tasty thali of Indian curry and dessert was a mouth-watering mango cheesecake and chocolate piece of art.

Sitting right next to me was Radio 1 DJ Nihal and my old Southall brethren international music star Jay Sean whose table was full of his brother Amit (1 half of the TEAMUK Urban music video directors collective Amit and Naroop), their respective ladies, his mum and dad-a very sophist acted looking and mannered couple, his grandma-an adorable elderly lady who was clearly just so proud of her grandson! Jay was very gracious to a constant stream of fans of all ages that consistently approached him to chat and for photo’s-what a truly lovely mannered man! On my table were owner of west end nightclub Anaya, Jonathon Ross’s media company business partner Olly Bengough – an entrepreneur in the media, film, music and entertainment business, the Asian awards organiser Paul’s parents and TV presenter, model, social media kitten Sharon Prasad who’s lil black book of contacts is one to rival mine. 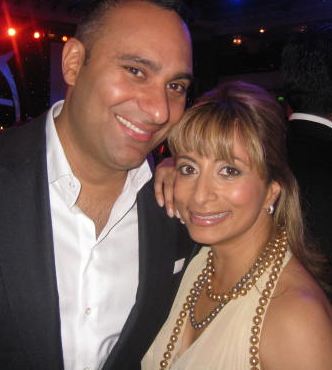 Canadian originated comedian Russell Peters took great pleasure in taking the mickey out of my surname and sang ‘’DUTTY WALA’’ in the manner of Sean Paul repeatedly when he wasn’t laughing at my ‘’crazy eyes’’. I got ball excited when Mayor Boris Johnson presented an award. He called the event “Stupendous” and mentioned that via his wife he had an Asian mother in law!. Prime minister David Cameron sent a video message and MP Teresa may attended and introduced the night which was hosted by lord Sebastian Coe.

Most celeb’s (especially comic Russell peters) got very excited and were in awe of Google ranking chief Amit Patel who won an award on the night. Aging but still beautiful Asian musical legend backing vocalist Asha Bhosle (she who the hit BRIM FULL OF ASHA was based upon) was inducted on the night into the Guinness book of records for recording over 11,000 songs throughout her career-which started at the age of 10!

The last award of the night went to the Asian (Parsi) legend that is the late, great Freddie Mercury whose mother and sister picked up the Founders award on his behalf. it was handed to the family by Queen member and Freddie’s old friend Brian May who told the audience “Freddie loved Indian food, glamour, success and he loved to be heard. And he would’ve loved that he’s still being heard now’’.

A hilarious moment (for me at least) ensued when my guest dropped chocolate on his crotch whilst dinning and then attempted to use his fork to scrape frantically away at his stain under the table. This must have looked quite vulgar and intriguing to our fellow table guests who luckily pretended not to notice. After he rubbed ice on the area and scraped away the whole area looked like a very unfortunate accident, at which point we realized it was well past midnight and like Cinderella, thought it best to depart!