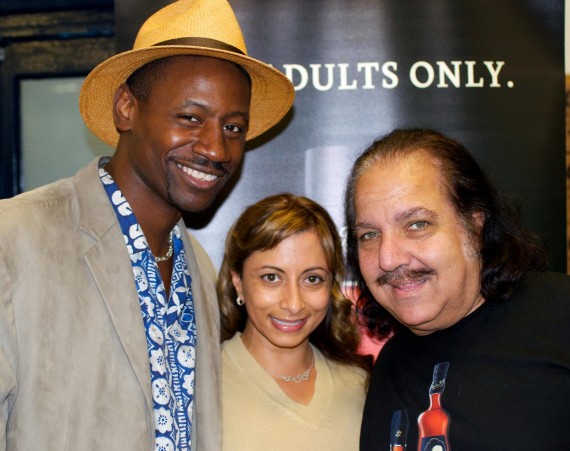 So last night I had dinner with some Motown legends including The Stylistics and a legion of Motown legends. As you do. But that’s another story-for next week. (Yes-every time I write a sentence like that, I repeat it in my head and think ‘’wow I have a blessed and surreal life!’’).

Before that I had a date with a porn star. That I wasn’t expecting. My big brother Richie called and invited us to the annual Rumfest- the world’s biggest festival to celebrate the diversity of rum and its rapidly growing popularity. A celebration of rum and all things related, that was taking place at Olympia in London. Before attending I had a dilemma; as neither myself nor my partner were drinking alcohol we pondered as to what joy we would possibly get from the event.? We were sternly informed it was about more than just drinking and we should give it a go. So determined not to waste an opportunity we took my friends 90-year-old granddad- a Dominican rum connoisseur and headed up to the west London venue on a Saturday afternoon. On arrival the exterior of the venue resembled carnival with families and groups of friends of all class, colour and nationality all swarming through the doors. Once inside it was clear that 2pm was not too early for any of these rum fans to be knocking it back, and at all the various stands that were fashioned into authentic looking rum shacks or slick uber modern bars, the cocktails were flowing like biggie smalls in his element. Granddad (who prefers to be called ‘’pops’’) was immediately initiated into the throng when Richie plonked a hard double shot into his hand and from then it was a marathon of visiting a variety of rum blenders, distillers and more where pops was encouraged to taste with abandonment. Suddenly big bro Richie called me yelling’’ Jas-come over here and take a picture with this man’’. I duly stepped up to find a near hysterical crowd had gathered around a short, tubby, balding guy that looked like a typical dirty music tour roadie. As the man threw his arm around me for our photo he smiled muttering in my ear ‘’whilst we’re here taking this photo, my d***’s upstairs parking my car’’. I smiled through gritted teeth as he added ‘’I may look short right now but I’m much taller when I’m lying down’’. Stepping away I was informed by my lovely family of male friends and brother that the gent was a legendary porn star called Ron Jeremy. I couldn’t believe it? This man was a visual car crash of vile. ‘‘That’s the point’’ my friend informed me ‘’its because a very regular man like him slept with over 10,000 stunning females that he became a symbol for all normal men’’. Apparently Ron was in attendance as he has his own line of rum. Honestly-the things corporations do these days to sell their products!. You thought Gary Linekar and walkers crisps was a brand partnership that was tenuous? Pops was smarter than me and when offered a picture with Ron gracefully stated ‘’no thank you-I am a man of the church’’. As the afternoon drew closer to finishing time the stage area saw a reggae band performing old reggae and lovers rock classics and the whole of Olympia was dancing wildly to the music with wild rum-fuelled abandon.
That night we attended the Rumfest awards and dinner and I was delighted to find Ron Jeremy seated with us at our table. Most of the night women of all ages and states shimmied across to him and draped themselves across him for photos-one blonde strumpet got quite out of hand clearly imagining she was starring in a movie with him there and then. ‘‘Oh well’’ I reasoned with myself ‘’don’t judge-it takes all sorts’’ as I continued applauding Rumfest organiser/ cottons restaurant manager Ian Burrell for such an eye opening, ear burning, heart warming experience!

JASMINE WITH ESTELLE
Next my west London home girl Estelle flew back from new york for 3 days and as she always does on touch down on Heathrow she bbm’ed all her peeps and advised us we were rolling with her that night.
So that morning I was required to figure out an outfit that would take me seamlessly from a best friends birthday lunch, the theatre to see SOME LIKE IT HIPHOP, a 45 minute session at a spa, and then accompanying Estelle to the NFL after party where she was performing and then onwards to west end nightclub Anaya where she was hanging out. It’s a tough job but I did it with fancy black suede high-fringed boots, black jodhpurs and a change of blouses.
SOME LIKE IT HIP HOP is a musical theatre show, at the peacock theatre where the dance troupe ZOO NATION headed up by choreographer Kate Prince, dance their hearts out. After her critically acclaimed first INTO THE HOODZ show there was much pressure for the follow up. Not knowing what to expect accept a hip-hop version of the old classic movie SOME LIKE IT HOT, I was pleasantly surprised. The show has definitely moved more into the contemporary dance style tone with its staging, music and choreography which many liked but I would’ve preferred the tone to have kept it a little more street/hood. The sets were all dimly lit olde world environments, which made it hard for me to stay visually engaged-like a kid I like drama, colour and fanfare-all which the show had snippets of but was not as hype as INTO THE HOODZ was at its time. its not fair to compare but INTO THE HOODZ used commercial music which had audiences bouncing in their seats whereas SOME LIKE IT HIPHOP had an original score which was accompanied by fantastically strong vocalists .The dancers choreography was on point and dancer Teneisha Bonner’s elegance really stood out from the rest as did singer Royston Legore with his deep Luther Vandross vocals. a fun, entrancing show for all the family-definitely worth a visit if you love this genre!

After 37 minutes sitting poolside up the road from the theatre at the St Pancras Renaissance I threw on the heels and skipped into Estelle’s hotel suite in Mayfair where a room full of females were sexing themselves up for the night ahead. As we dressed we caught up, laughed, shrieked loud enough to wake the dead and finally we piled into cars that transported us to the opulent, 1 Marylebone church style venue where the NFL party was in full swing. Estelle swung straight onstage and had the corporate partiers jumping around wildly in minutes as she turned ‘’calm, sophisticated and grown’’ into ‘’wild, frivolous and fun’’. Straight after shutting that party down we returned to the hotel where we ravished piles of Nando’s and then danced around to old skool tunes as ‘’DJ ESTELLE’’ picked the swing beat tunes, she and singer Roses Gabour re-enacted TLC, SWV and Jodeci and I played video camera woman.
2 nights later after we had all recovered from the sleepless Saturday we all met for a big group dinner at Shoreditch house (which included Estelle, Adidas PR maven Paola Lucktung, singer Roses Gabour, Vis from Radio1xtra, producer/ artist Daley, Atlantic Records Taponeswa and Linda, and other special friends) where we once again were probably overly loud- but we added flavour to the surroundings-and that’s ALL that matters!.