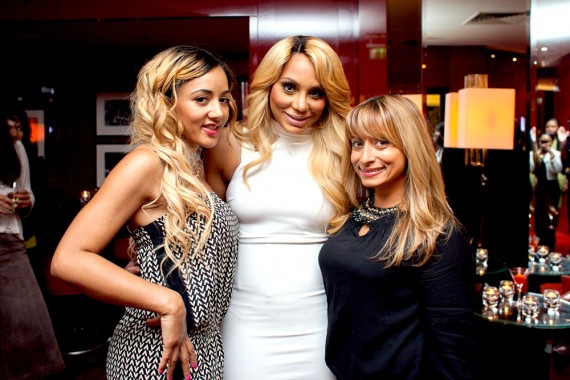 The first time I met Tamar Braxton was 15 years ago when I interviewed all the Braxton sisters (lead by Toni), on a grand London hotel bed, which we all piled on, for my column in the infamous black music magazine TOUCH. Back then she was happy to let her sisters lead, speak and take control of the media.Today she is totally in control. A pretty big reality TV star in the USA with her family reality show ‘’Braxton family values’’, which features her daily run ins with her family, sisters, husband and life. The show was so popular she and her husband Vince have been given a spin off series titled- Tamar and Vince! Quite unnervingly for a stranger to stranger chat, Tamar is happy to screamfrom the rooftops, about her still deep love for her other half ‘’I am still and will forever be so in love with Vincent. He’s my best friend, he’s the reason I now speak to my dad and he wont ever let me stay down, he’s my rock!’’ 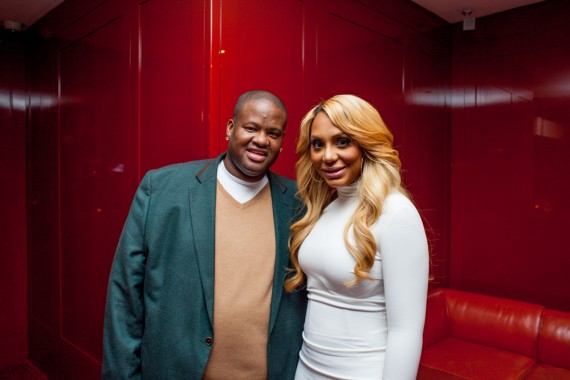 TAMAR WITH THE LOVE OF HER LIFE- VINCE!

The Braxton family have never been short of tabloid headlines from sister Toni’s infamous boob job, to her multi award winning music career. Tamar looks back on the early years with a level head ‘’ there was never any resentment on my part during the early years when Toni was very famous, I was the youngest and when Toni went solo I was happy for her. The only tough thing was once I finally came out as a soloist myself it was hard for the press and public to stop the connection and compare us constantly until we made ‘’Braxton family values’’ 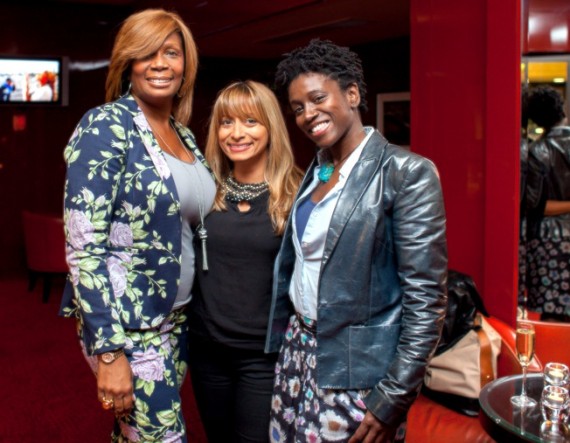 Tamar’s early career saw her work with two huge names in the industry. Jermaine Dupri and Tommy Mottola. Of JD she says ‘’ I agree he’s really underrated but he’s an amazing human being and now he enjoys djing all over the country so he’s having fun!’’ For a lady that’s been in the music game 20 years, she’s still very excited about her new album LOVE & WAR which includes titles like ‘’pettiest girl’’, ‘’stay and fight’’, and the one’’. I’ve been listening to the album all month and it’s a really strong classic piece of work reminiscent of the greatest R&B albums of the eighties era. She told me ‘’I’ve been singing all my life. This albums really all about my personal life andexperiences- most of which the public already know due to the TV show. The TV show actually made it easier to bring out new music, as I don’t need to get people to get familiar with me, they already know me. We have our dramas in the show, but that’s reality, there’s nothing wrong with being real about our ups and downs’’ 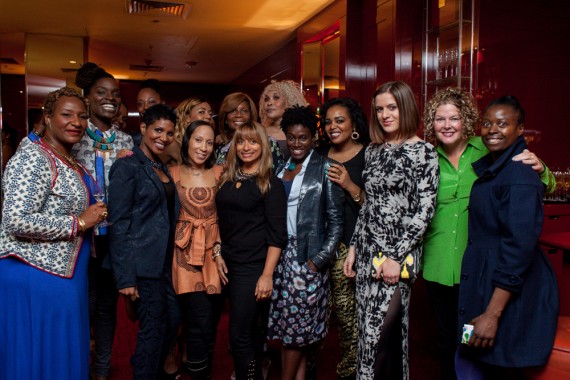 A WEALTH OF MEDIA AND MUSIC INDUSTRY LADIES-SEE WHO YOU CAN SPOT!

Even though she was the baby sister of the Braxton family watching her siblings careers grow, by 2004, Tamar was signed to Tommy Mottola’s reactivated Casablanca Records- there was a lot of talkabout Tommy and his hard-core business sense- what was he like to work with? I had to enquire about the powerhouse that is Tommy to see whether Tamar had experienced any of that much spoken of ‘’racism’ he’s been accused of by many. ‘’I worked with Tommy very briefly, he once told me I was very talented and that my music back then reminded him of Mariah’s ‘’music box’’, which made me so happy as she was my idol’’.

Tamar’s TV show see’s her vulnerable, warts and all, attempting to make sense of her life. She laughs at any suggestion it is ever fixed, scripted or hyped up ‘’there’s certainly no hype, the only thing I regret showing is my potty mouth, but when you have lots if sisters, managing all those relationships can be tough’’

The reality show is just one of many family focused shows in the USA and Tamar welcomes them all not seeing any ratings competition with her fellow Kardashian camera lovers ‘’there’s never any thought of competition, they’re all beautiful women and entrepreneurs, and my show is about sisterly and husband and wife unity and music’’

Tamar isn’t camera shy though and sees the 24-7 intrusion as oddly cathartic and positive ‘’there are a lot of frustratingly wrong media stories that come withy the territory, but reality TV taught me you cant care what anyone thinks or it will hold you back’’

Not only does Tamar share her TV life with her family, but also her music career and life on the road. When I catch up with her in Sony music’s London office she reveals that she’s brought the whole Braxton clan on the road with her. Her much adored husband Vincent is looking after their 3-month-old new baby son Logan, her mothers around to support and she’s even invited ‘’the rest of the girls’’ out.

She’s still in the first throes of baby love and admits ‘’motherhood is amazing but actually I had wanted a girl so I could have a Tamar junior. Logan’s nothing like me, he’s like his daddy, a total drama freeze, totally chilled out’ 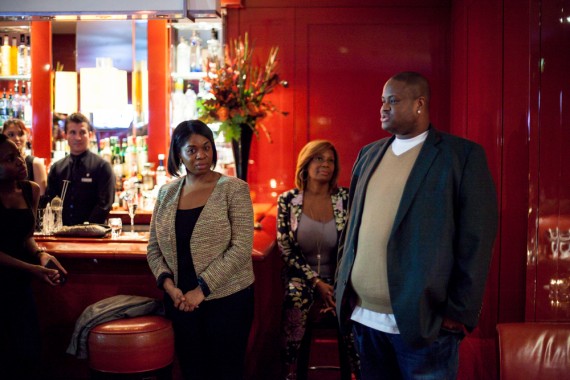 That same night, Tamar hosted a women’s only empowerment cocktail party at the red bar in the Grosvenor house hotel. She’s passionate about sisterly unity. ‘‘Women, period, have it tough in the music and fashion industry- look at Naomi Campbell’s recent campaign to support and champion more females of colour on the catwalk. I was bullied at school and it still makes me insecure. We women should compliment each other!’’

We discussed the difference in fan access now that the universe has twitter. Tamar laughs’’ it’s a blessing and a curse. Artists get frustrated and say what we shouldn’t. In the past we were very protected but now fans wanna get to know you. I thinksocial media helps to sexual young people way too early. So many kids now have fake twitter and facebook accounts that are clean just for their parents and a whole nother account for other stuff. I think though that if the children’s grounding is in the church then they know right from wrong. You just have to trust them!’’ 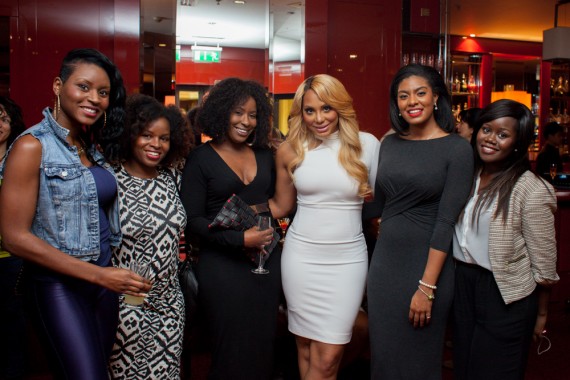 There was a real sense of female love and empowerment in the room, akin to a hen party with whoops and hugs all round. Tamar worked the room. As a testament to the respect that other artists have for her singingtalent other singers were in the house praising her talent too. We had Denise Pearson from 5 Star, Terri Walker, Princess Nyah and more, proving that Tamar inspires multi generational respect! 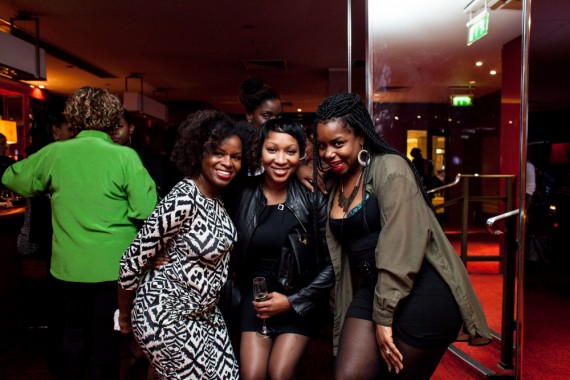 Princess Nyah said ‘’Tamar’s event was an exceptional meeting of the minds, with an exceptional bunch ofbusiness moguls! I love Tamar’s attitude, her style and Family values. Her album is a MUST have, my fav is Hot Sugar most deff!’’

So a big night with limitless champagne and cocktails with lovely nibbles, singers, media moguls, record label ladies and many other female movers and shakers! No war- just love!