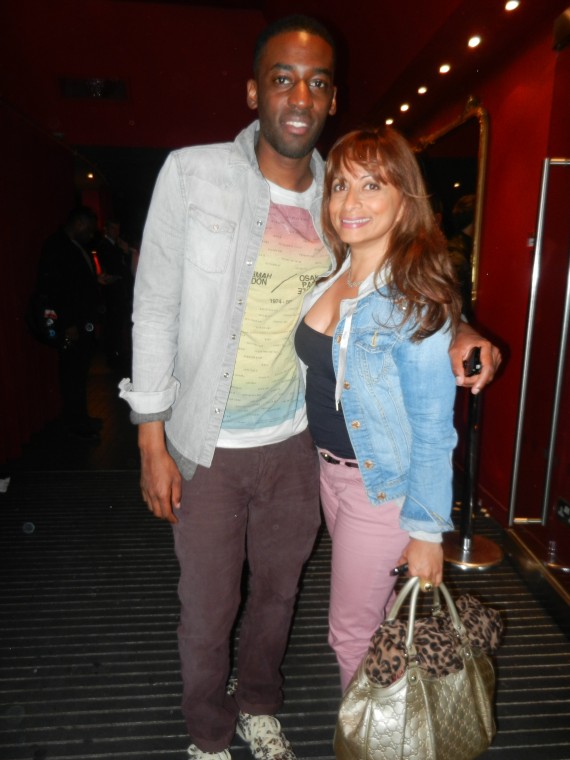 JASMINE WITH MUSIC/MOVIE MYSTRO- BASHY AT HIS VIP FILM SCREENING FOR ‘MY BROTHER THE DEVIL’. (pic; R.Pascoe)
I like the regular things in my life. I am a Capricorn creature of habit. I like to read the daily papers, have a regular girly night with my ladies and fit in my gym classes. This past month (if you follow me on twitter) you will know that a lady called Saskia (#supersassysas) has been regularly kicking my ass. Hard. She’s my new personal trainer and has my body shook. I used to be a trained ballet dancer and have been fit all my life. My body is flexible, strong and my core strength impressive (even though I do say myself). So when I was offered sessions with Saskia I did think ‘’yeah come on then do your worst!’’ She did. My bones shake slightly every time I see her. She’s broken me down so she knows exactly what my fitness weak points are (crazy cardio) and does these exercises and nothing else. As a dancer that loves the beautiful lines and body mechanics of yoga I like graceful controlled exercise. So Saskia makes me sprint fast and high, do countless burpees (look em up), loads of frogs with my ass down (horrific!) and generally makes my body spasm and ache. Last week she made me do one-legged squats all the way down to the ground holding onto elastic bands to pull myself up- I nearly cried. I love it! 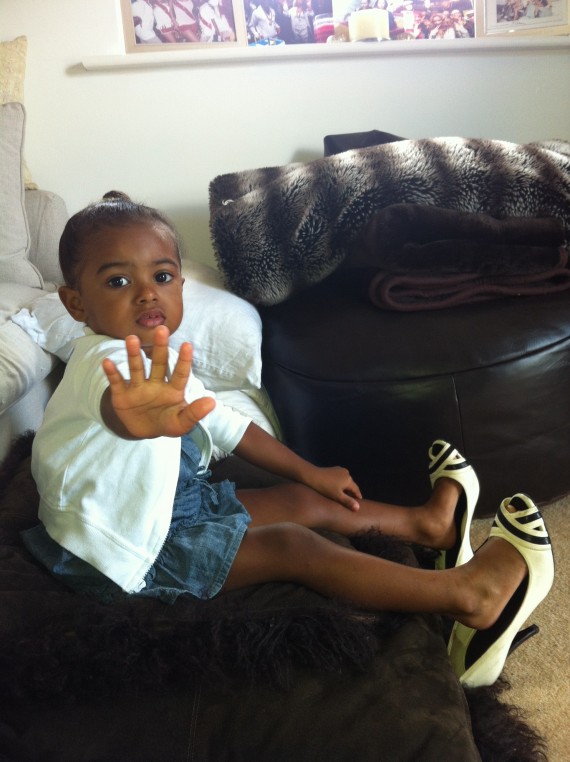 MY LITTLE 2 YEAR OLD TORNADO HOUSE GUEST WEARING ONE OF MANY OF MY SHOES! (pic; J Laurent)
Something else that made me nearly cry was my houseguests this week. My favourite Jamaican family who always look after us when we’re in the Caribbean came to stay for 10 days. Mummy, daddy and 2-year-old gorgeous daughter. 2 year old is the most gorgeous lil girl I think I’ve ever seen-with a personality to match! Like a lil tornado running on Duracell batteries she was up at 7am and asleep shattered at 3am! Being used to diving into her family swimming pool in Jamaica into the strong arms of her warrior physique shaped daddy, she throws herself around everywhere-mostly on her Auntie Jasmine. This part I love. However I should have been more child conscious before her arrival and popped my vast colourful, fancy shoe collection well out of reach because every 2 hours a different pair of my shoes were popped onto Ms Things tiny feet as she strutted into the living room to show us her latest find! – And lord does she have taste-she would always go for the designer brands! One morning I was at work when my other half text me a picture titled ‘’aw cute!’’ It’s a shot of the gorgeous lil tornado wearing my white Chanel shoes peep toes! Trying not to hyperventilate in my meeting I manage to continue talking in what I hoped wasn’t too strained a tone. I reciprocated by having her rock his numerous pairs of pristine never broken in trainers as soon as I got home. He didn’t send me any more photos like that again! The week was mega fun with activities galore (rum cruise on the river-more on that next time, Nando’s , Khans in Westbourne Grove, Richmond, Beaconsfield, Madame Tussauds, SeaWorld aquarium, London eye, London zoo, oxford street, and Primark! lol!) and it taught me a lot about how much more chilled I have become. A few years ago any of that shoe wearing action and pouring my mega expensive Jo Malone rose bath oil straight down the plughole would’ve had me taking faint and stroppy. Now I simply shrugged my shoulders and resigned myself to the fact that in 10 days it would all be back to normal! Come again tornado fam LOL! 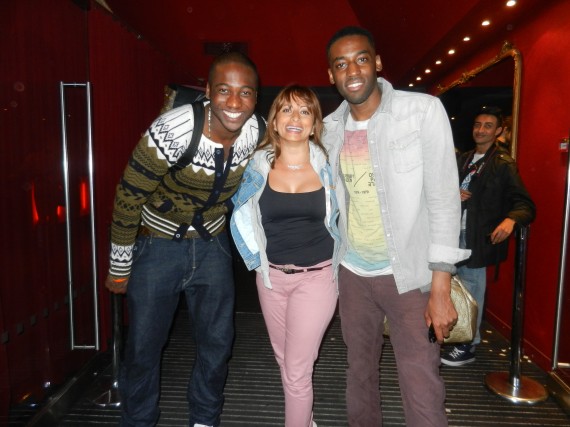 JASMINE WITH LOICK ESSIEN AND BASHY AT BASHYS NEW FILM SCREENING FOR ‘MY BROTHER THE DEVIL’. (pic; R Pascoe)
Normal came soon in the form of Bashy who invited me to a VIP screening of his latest film. (I say normal, but he was wearing leopard print furry Adidas trainers that had an actual animal tail on the heels!) -West London swag LOL). He is obviously known as an amazing musician with lyrical skills, a conscious voice, a live performance that’s one of the best of his generation and a lovely well-mannered attitude. He’s pretty big if you know about the UK scene but honestly he should’ve been much bigger years ago. He’s always putting in his time and I know something big is around the corner for him. In the past few years many of his music videos have been mini movies- like Dame Dash used to make for Roc A Fella, or Michael Jackson used to make in his hey day. He’s also starred in real movies in small roles and is very good. His latest film is called MY BROTHER THE DEVIL which is yet another movie in the vein of London’s urban street fiction of violence. This is now a full on film genre. Shall we call it grimy movies? Shall we give Noel Clarke the credit for being the originator? Bashy plays the Mr Big Bad man. The film is gripping and depressing with a clear message for young men on the streets. Full of the usual tales of consequence and social depravity it takes a left turn twist that no one saw coming which shook the audience up, but I must salute the main family of Egyptian origin- all of them were superb! 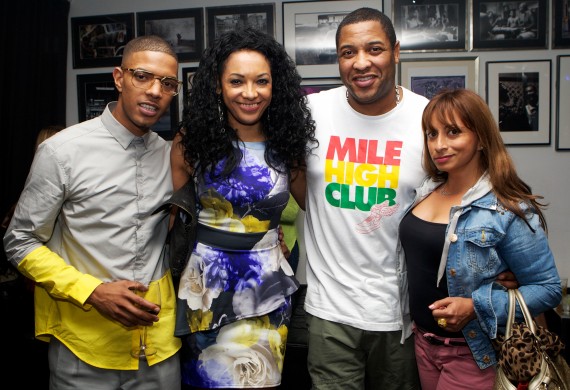 JASMINE WITH FAZER (N DUBZ), MOBO CEO KANYA KING, TALENT MANAGER / PHOTOGRAPHER RICHARD PASCOE AT THE MOBO NOMINATIONS PARTY AT FLORIDITA. (pic; Paul H)
Straight after the movie, myself, Bashy and many other TeamUK movers and shakers wandered 2 minutes up the road to the MOBO nominations launch party at Wardour Streets Floridita venue was heaving with TeamUK acts, press and wannabee’s from the scene. (You know you’ve been in the game a while when you remember all the other acts that have had parties in the same venue-Usher had an album launch here once when it was still very fab and new!) MOBO head lady Kanya King introduced and told us how excited she was about the awards being in Liverpool again on November 3rd this year on a Saturday for the first time. Radio host Gemma Cairney spoke (think she’s a bad choice at these things- she isn’t known for championing urban acts or seen regularly on the scene the way many of her colleagues are- just my humble opinion). Up and coming acts like Angel and Delilah performed very well. As usual the crowd were very rude and noisy whilst the speakers and performers were onstage. Guests included; Stooshe who looked fab with loads of hair extensions, Tulisa who was very blond and a bit albino looking-she’s much cuter as a brunette, her body did look banging though like you could bounce pennies off it, Sincere-who looks more and more like Nas every day, Angel-who I don’t think has a body part left that isn’t covered in tattoos, Preeya Kalidas in a very Amy Winehouse hairstyle, Jessie ware looked as serious and as traumatised as usual, DJ Ironik was colourful and sweet as ever, Fazer looked dashing but there were some awkward sweat patches under his armpits at one point-nerves about bumping intonex Tulia or just sweaty?, pretty Cleo Sol had a long, furry ,pink thing hanging off her all night-I was going to kill it but feared for the animal rights people, Rebecca Ferguson looked scarily like she’d tried to clone herself into a unification of Beyonce and Leona Lewis, Delilah sounded wonderful and really stood out with many commenting on what natural style she had, Island Records table looked very slick and powerful headed up by Tinchy and head honcho Darcus, Amy Winehouse god daughter Dionne Bromfield stayed close to her boss Darcus all night , Misha B resembled a very young Chaka Khan and sounded strong vocally too and DJ Swerve held it all together by spinning on the decks. A fun night! 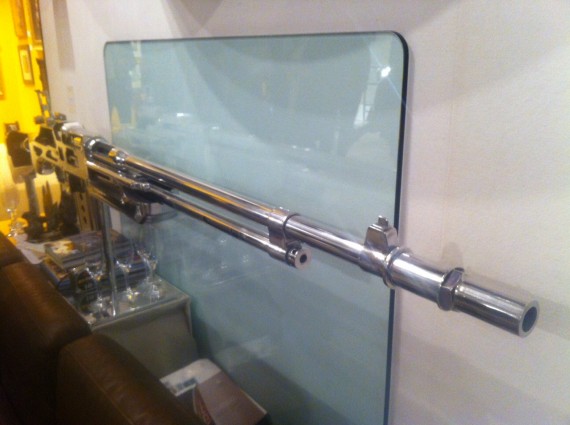 A DOUBLE SIZED GUN AT THE LAPADA ART AND ANTIQUES FAIR IN BERKLEY SQUARE, W1. (PIC; Karen Palmer)
More formal soirees next included attending BBC head Mark Thompson’s leaving do at Broadcasting House, then to Sadlers Wells for the Sony event where head Nick Gatfield spoke proudly of his upcoming acts and positively gushed about his boy band One Direction!
Then The Earl Howe, president, and the lord Chadlington invited us to the Lapada Arts and Antiques fair in a marquee in Berkley Square, W1. (http://www.hatchwellantiques.co.uk/antique_furniture/?cat=2&mcat=1 )
When my friend Karen Palmer (formally Jet Star Records / now parkour interactive visual creative director), invited me to accompany her we both imagined an actual tent like the ones of our youth erected in Ealing Park for the local fair. This, readers, was a mansion with 3 huge ballrooms, copious amounts of champagne and mint mojitos and swarms of London’s most wealthy old money. You could practically taste and smell the good breeding. Ladies of all ages were rocking pearls, Chanel suits and sophisticated flat moccasins or loafers or classic black stilettos, whilst the men all looked like they stepped off the ralph Lauren catwalk-even really elderly gents with swish cravats and neck scarves. They all had a unified look about them. They were a community that clearly socialised together often and were comfortable in their status. There were around 200 stalls with antiques, sculptures, antique jewellery, artwork both classic and modern, furniture worth thousands- it all made sense now. I’d always wondered where the very wealthy found these old oak tables, chairs, paintings that looked like they belonged in a museum and so on. It was fascinating. I was as gripped by the attendees outfits as I was the artwork!. Elderly ladies with striking unusual neckpieces, very elegantly dressed folk who didn’t have to bling to show their sophistication. Young supermodel looking privately educated ladies who had clearly been to finishing school and did the St Barts and Monte Carlo calendars annually! It was lie being given an access all areas pass to a Jackie Collins book!
My favourite collection was called air art by Hatchwell Antiques (http://www.lapadalondon.com/art-and-antiques/d/ejection-seat-by-martin-baker/109720 ) that make furniture from old discarded aeroplane parts like propellers, engines, ejector seats and more- it was striking but way to expensive for my meagre purse. About 10 years ago Alan Hatchwell started to sell exciting aircraft items (now referred to collectively as aeronautica) that work amazingly well as decorative items, and are also sought after by collectors. Alan has a love of aeroplanes so this is an interesting way to indulge his interest and certainly added an unusual range of works to the LAPADA Fair. I felt like id really managed to get my culture swerve on- if only I were wealthy enough to buy this art. Someone famous-Andy Warhol I think- once said that art is what you can get away with, in which case I’m off to indulge in some sofa lying art!.