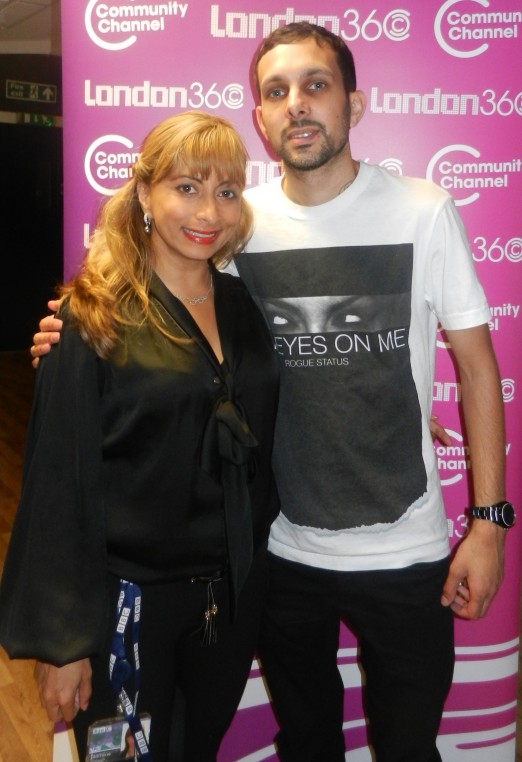 JASMINE WITH THE VERY UNIQUE TRAIL BLAZER THAT IS DYNAMO!
My reporters at London360 are currently finishing of an all-exclusive prison special about a young offenders institute called ISIS, which rehabilitates and trains up young men in prison. Many of the young men interviewed are very lost youngsters who simply didn’t have the best starts or breaks in life and much of their surroundings are responsible for their consequent actions and life choices. Growing up in disadvantaged areas, having one parent, having bad parenting, feeling responsible for their siblings, wanting to fit into gangs as they have no family at home, being lured into gang families by local hoodlums recruiting young criminals, having a lack of hope for the future, being exposed to a positive life, having positive people in their lives. If you only have to deal with one of these facts you might get through fine with other factors involved, but mash together even just 2/3 of them and the potential for falling into the wrong side is extremely likely. If we leave these young men in prison to rot away and strengthen prison gang ties we are only creating a vicious cycle that affects us all in society. At ISIS the prisoners are trained in a wide variety of skills like barbering, media production, cookery, motor vehicle maintenance, DIY, waste management, plumbing, in house Samaritans, all academic subjects and more. Once they leave and finish their sentence they attend a resettlement program. All this leads to us having less angry, desperate men being thrown back into society and makes the community a nicer place for us all.
The TV special will be on air mid October- I’ll keep you updated!.

When I think of young men that have told me that they had a positive strong male role model in their life-I always remember TV magician dynamo. I recall him years ago telling me about his grand father who had mentored him and his magic skills to distract bullies at his Bradford school. Dynamo adored his granddad and was extremely lucky to have a positive, male man looking out for him. Dynamo continues this pro-social part of his life by giving back when he can. As well as travelling the world performing his magic for celebs and Joe public, he’s always raising money and awareness for charities like the princes trust and cancer research amongst others.
Many moons ago whilst I was at MTV he and his manager met with me to try and get a TV show. I had always admired his skill and well-mannered attitude but wasn’t sure I could justify a magician on a music channel or have the first clue about how to physically film magic tricks. I wasn’t sure I could convince my bosses or myself it was relevant over a music show. Most people say they don’t have any regrets. I think that’s crap. We all have regrets and I’m grown enough to state mine. I now regret that I didn’t fight harder to make it happen as I can see why he’s very a part of this whole new recent #TEAMUK generation. Talent is talent now whether you’re a rapper; footballer, dancer, Olympian or writer and I can see that dynamo would’ve fitted right in!
Of course dynamo being a winner persevered with his always loyal and quietly strong manger Dan and so currently they can be seen on the second series of ‘Magician: Impossible’ at 9pm on Thursdays on Watch (SKY / VIRGIN) and it’s doing pretty good. Dynamo recently sat down with me to reminisce and smile at his achievements thus far
‘’ First episode, I think we got three point seven million viewers. It’s gone a bit crazy to be honest, it’s been a mad year. You know, I went from walking across the River Thames to getting mobbed outside HMV when I did a DVD signing. SO, yeah, I’m causing magic and hysteria everywhere I go’’.
I remember seeing dynamo pop up on music acts tours whilst I was filming shows like MTV DIARY and MAKING THE VIDEO and he nods as he admits ‘’ I’ve performed magic to quite a lot of people over the years, from, royalty like Prince Charles, to hip-hop royalty like Jay-Z. Most recently in my series I’ve stepped away from performing for the celebrities so much, because I wanted to capture the essence of the real people and the everyday man. We went out to Rio and was performing magic in the Favelas and with the street kids, and these kids, half of them don’t even have TV’s, so when you perform magic their faces light up, their eyes, like they’ve seen the most amazing thing they’ve ever seen in their lives, and for me right now, that’s what it’s about, it’s about capturing that moment of wonder, not just, a-listers, because, at the end of the day, I get to travel the world, putting smiles on peoples’ faces, and amazing them, and it’s not just about the A-listers and the celebrities, it’s about everyone’’.

Dynamo always gives credit where its due and revealed that it was a charity that helped him in the first place which is why he is so charity focused ‘’Well, without the princes trust giving me money in the first place, they gave me two thousand pounds, I wouldn’t have been able to get a camcorder or a laptop to go start filming all my videos, so then you never would’ve seen my things on YouTube or on the TV show, so, for me, it started it all, and I wouldn’t be where I am without them. And I think, there are thousands of, young people out there, who need that support, who are not getting it from other places. So for me it was the most important thing that ever happened to me, and I’m pretty sure that anyone else out there who’s been helped by them would say the same’’.

When I’ve seen dynamo perform to celebs, lords, politicians or your average man on the street my favourite thing is to watch their reaction which can range from joy, wonder to shock and fear!, dynamo laughs ‘’I most enjoy the reaction when I’m performing, you never know how people are going to react, some people faint, some people run away from me scared, some people are just gobsmacked like (facially gestures) they don’t say much for a long time. it’s different every time, so it never gets boring, I think if you watch the shows or watch any of my videos or me performing, even you can appreciate why the reaction would give me a buzz, cause often, you’ll find, it’s what you find amazing about it as well’’.

Of course no chat with this young star would be complete without him mentioning his greatest role model ‘’ as you already know when I grew up, my main role model for me was my grandpa, he was a legend in my life, still is, it was actually his birthday yesterday but he’s passed away earlier on in the year and it was a sad time, but, you know, I kind of celebrate his life every year now. And without him I probably wouldn’t be a magician, wouldn’t have the confidence in myself to keep pursuing this crazy career that I’ve endeavoured on, there’s people in areas that I grew up in, who are probably serving time in jail, who are probably not really doing what they need to be doing to have a successful career in life, I was lucky to have grandpa’’.

When we spoke to dynamo about our current young offender special about prison rehabilitation he said ‘’I think it would be unfair, to let people sit there to rot, obviously each case is different, but we are all human at the end of the day, and we all do make mistakes, some mistakes are far worse than others, and I think they get dealt with accordingly, but I think that at a young age it’s very easy to get caught up in the trappings of petty crime. There are more role models out there that they see doing negative stuff, than there are in their community so they’re likely to see a way of making a quick buck, they see a quick way out of their estate and they often try to go down that path but they don’t understand the consequences it could lead them to. so I think if you go in there, and they’re given the right direction whilst they’re inside, then at least it gives them a chance to redeem themselves, but also a chance for them to come out and have a good life and do positive for the community’’.

Dynamo himself grew up without his father there and admitted ‘’I think for me, because I only really had my grandpa as the male role model, I don’t fully understand what I’ve missed, but, you know, it’s hard for me to really say what it would’ve been like to have my dad around, cause he just wasn’t there. Maybe a better sense of direction, I would’ve have been allowed to be a kid for a bit longer, and not have to do all things, like look after my mom .So I think, not having my father around, not having a positive role model early on, stopped me from having the childhood that I probably needed’’.

On that note we agreed to cherish the positive people in our lives and let them know before its too late what they have meant to us! YOLO!