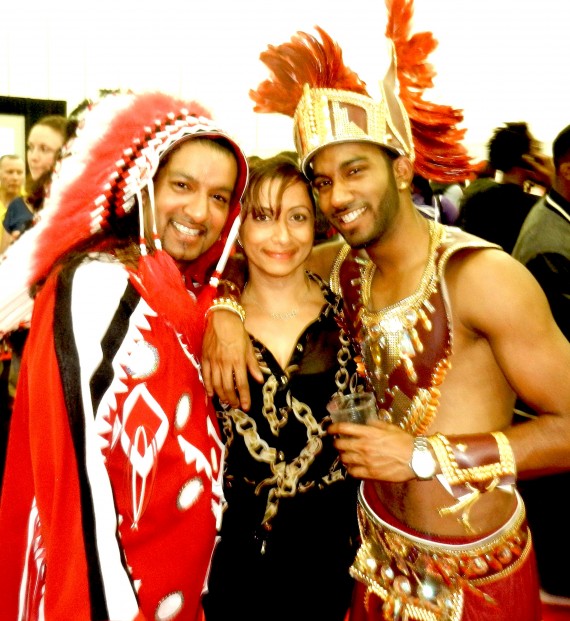 JASMINE AT RUMFEST.
Spend your social time with winners is one of the best pieces of advice my dad ever gave me.
Luckily my friends are an ambitious pro socially minded bunch so lunches and dinners are as much about catching up on personal lives as well as connecting our various career projects and making our networks and brands bigger. This week I caught up with a family member who’s an accountant for a big movie company and shrieked at him and my aunt until he promised me James bond film premier tickets. I met BBC Radio London’s most dynamic broadcaster Eddie Nestor for lunch and strong armed him into giving yet more young journalists a break in radio, I met up with international model Rachel Ritfeld for dinner where I convinced her to speak to reporters about the fashion industry and body image.
Next, over dinner, I convinced Sandra Fearon who runs body image London to come into the media Trust and give mentoring sessions and workshops to young disadvantaged youth about grooming and appearance in the workplace, then I called THE VOICE editors and begged them to pop in and give feedback to the new LONDON360 reporters about print press. 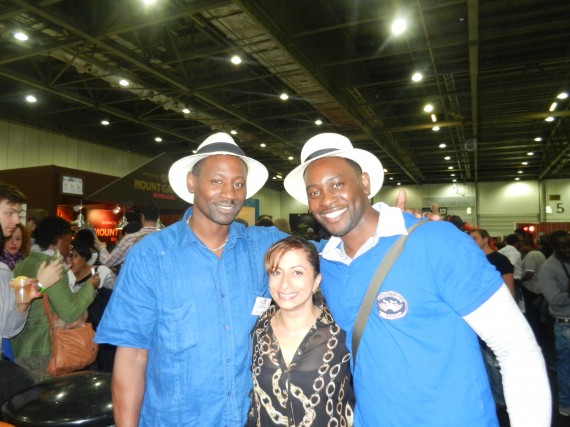 RUMFEST CEO / RUM AMBASSADOR IAN BURRELL WITH HIS BROTHER.
My next trip was to London’s Excel Centre in the docklands for the much anticipated annual Rumfest where Saturday was so sold out it was heaving like carnival and Sunday was as manic but better for me as I could have at least a square metres circumference around me to breath. The venue was full of rum enthusiasts and taste connoisseurs who were holding out their complimentary rum glasses for shots and cocktails at more than 40 stands promoting rum from across the globe.
As soon as I arrived I was greeted by Rumfest CEO’s Ian Burrell and his siblings; sister Sam and brother. Immediately after checking out the always fabulous goody bag that he handed to us (which this year included a soca mix cd) , we saw a tall gent who was tasting rum and my mate excited nudged me going ‘’ooh look it’s Patrick Vieira!’’ Patrick was standing drinking and chatting with another tall gent and my mate excitedly squealed ‘’and he’s with Mikaël Silvestre!’’ 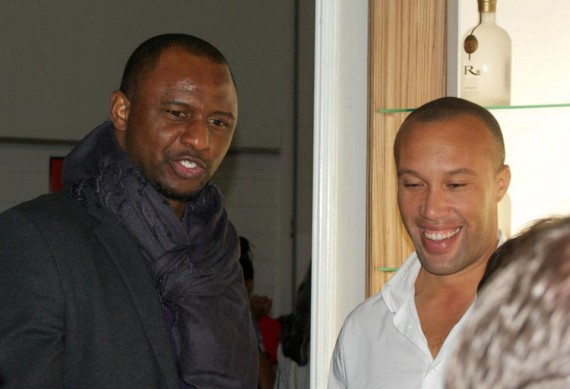 PATRICK VIEIRA AND MIKAEL SILVESTRE AT RUMFEST.
As you can imagine all of this went totally over my no football knowing head until music manager Richard Pascoe, who working in the vicinity, had a quiet word in my ear ‘’Jas don’t you recall when you were on CHOICEFM with George Kay-George taught you a football chant-it was the one for Vieira’’. It all came flooding back! George used to make me chant ‘’Vieira whoa oh oh oh oh, he comes from Senegal, her plays for arsenal’’ every Friday live on air. As this was the only thing I could think of sharing with him I felt it best to let it go, nod hello, and keep it moving.
We saw excited inebriated punters taking excited photos with the skimpy costumed carnival dancers (how much do they pay people to wear those?) interestingly this time it was just about leering at the skimpy girls in costume as they had male models too. I noted that whilst I had imagined there would be a dominance of men at the event that it was pretty 50-50 with the ladies in full effect too!
In the final round of the rum-mixing event I witnessed a number of big names from that world demonstrate rum cocktails with interesting mixtures including tamarind, chocolate and more. I was most surprised to see a representative from music legend Chris Blackwell’s rum company attend too. I had no idea this music man (who helped launch Bob Marley, Grace Jones and U2) also owned a rum brand called Blackwell’s!. I caught up with the mixologist (get me with the proper jargon!), who told me ‘’Chris Blackwell is an international music icon, entrepreneur and cultural pioneer. His reputation and lifestyle are the inspiration behind the brand, and he is proud to offer the best Jamaica has to offer. Chris hails from one of its oldest merchant families, the Lindo family, who first came to the island in 1625. His grandfather owned J. Wray & Nephew—renowned for distilling the best rum in Jamaica. Chris continues in the family tradition with the introduction of Blackwell Fine Jamaican Rum, developed from his own recipe. With his music label, Island Records, Chris brought the best of Jamaican reggae to the world, now he brings you the finest Jamaican rum, made from Jamaican sugar cane and distilled by Jamaican workers. This isn’t a simple light rum, Blackwell Rum, known by Jamaicans as Black Gold, is colourful, rich and complex, like the spirit of this magical island’’. 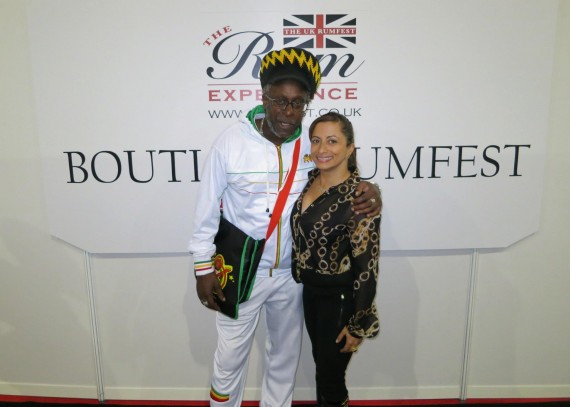 JASMINE WITH RASTAMOUSE CREATOR MICHAEL DE SOUZA AT RUMFEST.
Just as I was making my way around the venue clocking merry old dudes, classy young bar owners, ladies holding their own up against the male swiggers I bumped into Rastamouse creator Michael de Souza whom I spoke to about how the children’s cartoon is doing and when it might be aired in the Caribbean. He revealed that they are indeed working on it.
As the designated car driver on the day I sampled a couple of cocktails before filling my shopping bag with one of my main loves in life- hot pepper sauce- which was being sold at one of the stalls too. Good thing too as at the end of the day I used a whole bottle on my roast chicken dinner just up the road.

Finally I headed off to Leicester square for my first ever Nollywood style film premier of AMINA. It was the movie Amina starring Nigeria’s biggest actress- superstar Omotola (whom I’d had the please of having dinner with a few weeks ago). The red carpet actually took 2 whole hours with TV and radio crews jostling for space amongst the countless African beauties in long embellished gowns and sexy frocks in an array of colours and headdresses. Many columnists were hanging around my the press boards hoping to grab a quick photo with Omotola before the film began but when the PR team advised us she hadn’t even left the hotel yet we decided we’d better take our seats. In the house were names like 400 metre athlete and Olympian Christine Ohuruogu. I was seated right behind English rapper/ actor Kano and his lady (who played a great role as the daughter in the film), so we giggled about how sharp his shape up was. I was sitting in between 23 males who were sharing a bucket of popcorn so it looked as if I was eating both theirs and my bucket.in case you spot any photos of Kano with me in the background, to clarify-mine was the small one!
The film was set in the UK and covers the story of Amina-a young girl brought up in a family where the father is violent and abusive. Amina’ tells the story of a young woman (Omotola) who, devastated by a series of life changing events, especially teenage pregnancy, suffers a total breakdown.
Her story develops and takes twists and turns until eventually she is institutionalised in a mental hospital. The film clearly had good intentions with its message and storyline and Nigerian actress Omotola was very believable and played her role well and with integrity. However the film was let down by things that were basics such as casting and focus pulling. Many scenes in the film had dodgy camera shots with focus unclear. Casting was questionable. First the adult character of Amina that Omotola plays has a strong African accent but the actress playing her in her youth was a straight up British cockney that looked nothing like her. Her mother was started off as a Jamaican and then seemed to take on African characteristics? Some scenes that were supposed to be set in the eighties and nineties had close ups on cars with 2011 tax discs! All these errors led to amusement and detracted from the film, which was a pity. Overall it was a good film with a serious message and dubious comedy moments which I’m not totally sure were intentional!
Now from one premier to another, I’m off to have a mani-pedi, hair done, make up done, personal trainer to get my silhouette into shape-as I’m off to…the James Bond premier!