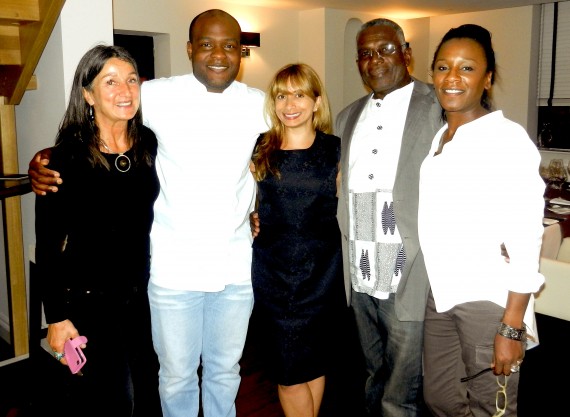 SARAH , ADE, JASMINE, RUDOLF AND SHONA!
On Sunday I was invited by one of my favourite actors, EastEnder’s Rudolph Walker OBE, to the launch of his 2013 Inter School Drama Awards (RWiSDA), which take place on the 14th July. RWiSDA was 1st pioneered in the 70’s in Brixton by this highly respected and much-loved actor. The awards take place between young people and schools nationally and internationally in a way that helps young people use their spare time in a positive way, offering an alternative to ‘hanging around’ after school and build young people’s confidence and self esteem. 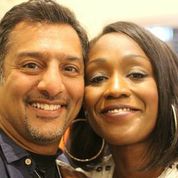 ACTOR’S DIANE PARISH AND NITIN GANATRA AT RUDOLFS LAUNCH.
The launch, sponsored by Glen Insurance, was held at the award winning Parson’s Restaurant in Waltham Abbey run by chef Adebola Adeshina for a small intimate group of us and after a mouth watering dinner I sat down for the speeches and auction with the other guests who included Keith Vaz MP, , actors Jimmy Akingbola and Chizzy Akudolu from Holby City, EastEnders stars including Diane Parish, Lindsey Coulson and Nitin Ganatra, Martina Laird and Cyril Nri, Birmingham International Film Festival head Dean Alexander and comedy agent Sarah Moore. The auction raised £2,000 for the RWiSDAs, unfortunately I couldn’t persuade my friend to bid for the beautiful diamond necklace kindly donated by Diamond Thoughts. Rudolph’s beautiful daughter Sheona acted as auctioneer on the night and has clearly inherited his gift to entertain! 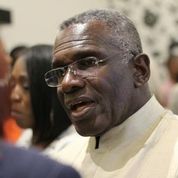 RUDOLF TAKES THE MIC TO LAUNCH THE NIGHT!
The food which chef Ade presented was unique with twists to all usual options. There wasn’t one boring dish on the menu. On Fridays he makes a mean Chicken curry pot pie. Sometimes he pops a giant bone marrow on the plate too-which some people find offensive but he’s just trying to open their minds. People come from all over to attend Parsons –it’s a destination restaurant.
He puts it down to his Nigerian background where ‘’meat is important in every meal’’. Ade is very strict about changing up his menu every few weeks as he likes his food to be real and seasonal as opposed to genetically modified food.

Rudolph explained the inspiration behind his foundation. ‘‘In 1973 during height of TV shows like ‘Love thy neighbour’ we used to have the stop & search SUS Law. In those days I used to visit schools. Kids said to me ‘’we leave school and get stopped by police all the time and its really frustrating and hinders our lives’’. So I Launched a school competition for 2 Brixton schools where kids in groups of 10 would write, direct and perform their own play. Their school selected the 3 best to enter into the competition. There were Prizes for the best. This lasted for 4-5 years but then ended as housing estates took over the schools’’.
‘’The competition is back now though and in its 3rd year and we continue to have phenomenal feedback from schools and teachers. There was a slight hitch when in the 1st year some of the boys set off fire alarm, which delayed things, but it still happened. It’s about giving them self focus and confidence”
Rudolph wants to take it the foundation nationally and internationally and want youth to have the focus and confidence to take responsibility for themselves.
Rudolph and I chatted for ages about his foundation but he also gave me cooking tips-apparently he’s a hot chef too!. He encouraged me to try tripe, taught me how to make my salt fish dry instead of wet and described his homeland Trinidad’s carnival as the 8th wonder of the world.
I wish Rudolph every success with the awards. The final is on July 14th at Milford Arts Centre in Edmonton and everyone’s invited.
Any project that provides much needed help and guidance to young people, should be supported by us all. 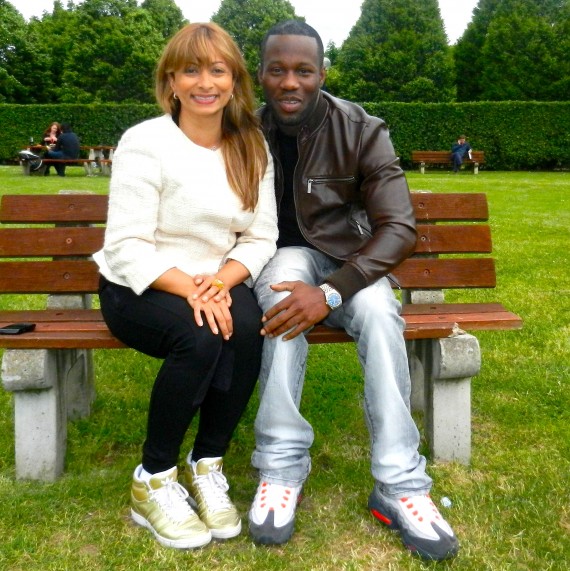 JASMINE WITH ABOUT TO BLOW ACT- MYNATURE- IN THE BBC’S FRONT GARDEN!
Next I caught up with a young music act called Mynature. (pronounced ‘miniture’). I get sent a lot of new music by pluggers, PR teams and record labels and usually listen for 30 seconds before hitting stop if the music doesn’t resonate with me. Not only had I begun to hear a buzz about this new kid on the mainstream block, but also I liked his positive lyrical content. I believe music acts should put in the hard graft first and do as many live gigs as possible and generate their own buzz before expecting media to talk about them.
Mynature was also recently on the Channel 4 news which was covering the horrific Woolwich story where fellow rapper Boyadee talked to him about the terrible tragedy and life on the South East London’s roads.
Mynature told me that ‘’Woolwich is a positive place. Acts that come from here are intelligent. We gave the world acts like Tinie Tempah and Saskilla. Aside from all the memorial flowers the place is still where I call home’’.

I teased Mynature about his diminutive name wondering what was happening when we already have little men in Tinie and Tynchy. He laughed and explained ‘’When I was younger and unfortunately associated with gangs I needed a road name. I could’ve had ‘Short man’,’Lil man’,’Titch’ but I liked that Lynx used ‘’y’’ instead of ‘’I’’ and I liked the double entoundre of my nature so Mynature it was’’. Get that readers?
Mynature continued ‘’Short people are more creative. We have to do more to stand out. We have Lil man syndrome so we end up having to be bolder than most!’’

Mynature’s been rapping a long time but took a 5-year break to form a strong team and now returned bolder and more confident than ever ‘’A lot of MC’s are similar to myself. Everyone’s claiming to be hiphop but all of them don’t have a hip-hop background. I want people to know I am rap”. Hip-hop is in my blood as far back as my life goes. There’s not another person like me as talented as me”
Mynature stresses ‘’Hip-hop was once based on mc’ing. It was not all depressing. I want to bring back the feel good factor with a Dj, Scratching, dancers and graffiti.
Your favourite rapper should be based on their lyrics and music not on their image and how they look. Nowadays It’s all about image not lyrics. My favourite MC was Cannibus. I appreciated his lyrical skills. He had wit and metaphors. Tupac/ Nas were also great storytellers that inspired me too’’.

Mynature’s latest track ‘Mr Is Rap’ is released this week on 26th June.The track has received support from the likes of influential taste-makers DJ Semtex and Shortee Blitz. On the song, Mynature poses the question “why so many wack rappers are getting airplay when all they talk about is money and clothes or they will rap abut a lifestyle that isn’t true to themselves”
Mynature had me rolling with laughter when I asked about the behind the scenes of his video shoot where his Director Kalvadour had some glitter which he gave to female extras to blow glitter all over him. Mynature was so pissed off they had to stop the shoot. ‘You can’t be putting glitter on a black man with Vaseline on his face!’’

Mynature spent -6 years in prison at the age of 21 and on leaving went from his original career as a barber to a music act ‘’I was a barber and a roadman. I sorted out other people’s beefs occasionally but some people held feelings. At one point my shop got shot up so obviously thereafter people didn’t wanna get their hair cut with me. So now I had to find some other job or my innocent business partner could get injured so I left. I realised I liked music. I was hanging out with fellow music star Doc Rotton who was signed to mercury. I was seeing it was possible and It inspired me to try it for myself. Doc and myself made songs together. His house was so cold he was in bed with a puffa jacket! I was happy for him once he made it cos his struggle was deep’’

When it comes to the invisible national music scene often referred to as ‘’team uk’’ Mynature doesn’t believe its a unified movement. He feels it’s more fragmented by its own success. ‘‘Its myth. I don’t think there is a teamuk. When people feel something’s about to blow, they simply jump on the bandwagon’’

Predicting the future, Mynature states ‘‘we wanna create good music that shows our journey, creativity, and build a fan base. Once we know we can sell, we will move forwards working on our brand! I want people to say I’m the best!