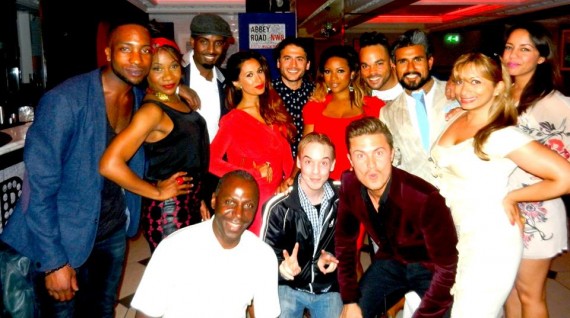 PREEYA TAKES CENTRE STAGE AT HER BIRTHDAY DINNER AT RETRO FEAST!
Actress and musician Preeya Kalidas hit me on Friday morning with a last minute.com invitation to her birthday dinner that night at retro feast in old Burlington street. It’s a pop up restaurant that used to be the celeb filled, drug fuelled, and tabloid haunt of yesteryear-called Embassy.
I rocked up punctually at 8pm as requested knowing Preeya is a great timekeeper and always 5 minutes early to anything I’ve ever invited her to. Arriving at the bar I was happy to spot our mutual friend Celena Cherry- lead singer of girl band The Honeyz. Also in the vicinity were singer Nate James, who would post dinner double up as DJ Nate James!. Other music peeps in the house included singer songwriter Celetia and performer Royston. Arriving together were PR lady Vanessa Amadi and her client/friend- Sugababe lead singer-Keisha Buchanan. Preeya arrived wearing a sexy short, backless red dress and 100inch vertiginous platform stilettos. She was smiling from ear to ear as the paparazzi outside snapped away at her. I noted that Preeya and Celena were both rocking red frocks and just as I was about to point it out to Celena she asked me ‘’why aren’t you wearing red? Preeya requested it’’. Huh? My text said nothing about red garms. Just as I was cussing Preeya for forgetting to tell me and simultaneously calling my other half to ask whether he’d bring one of my red numbers up when he arrived, I noted that the guests weren’t all adhering to that request and stuck to my cream ensemble. For a minute I had felt like the wedding guest who had turned up wearing white to insult the bride! 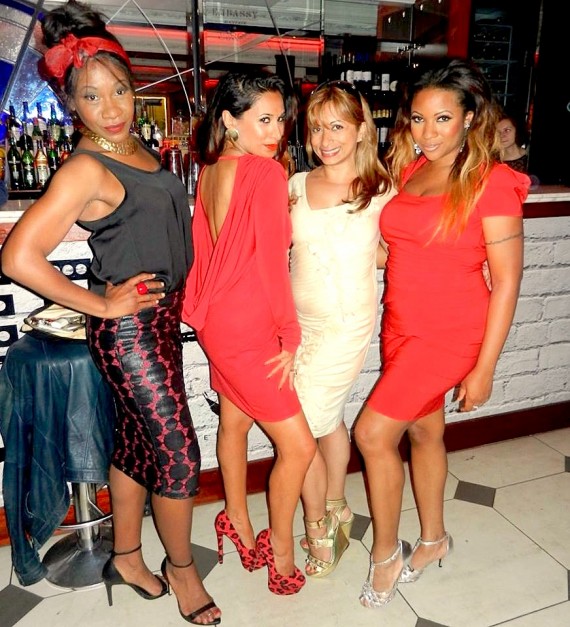 WITH ACTRESS KAREN, BIRTHDAY LADY PREEYA AND HONEYZ LEAD LADY CELENA CHERRY!
We took our seats at the long dinner table and wolfed down the tasty food laid on by Retro Feast. Most of us had crab on toast to begin and steak to follow. Awkward moment when the waiter held aloft starters with a confused look and 2 of us shouted out ‘’we both have crabs! ‘LOL
All was washed down with their in-house cocktails and house wine. Then dessert was courtesy of Preeya’s friend Greg, who runs a healthy protein ice cream brand called WheyHey. (Only particular eater Preeya would have a healthy ice cream option lol!)
Post dinner all were up and out of their chairs dancing until the early hours to old skool R&B whilst the paparazzi peeked through the dark night sky still getting shots of Preeya winding sexily up and down surrounded by all her mates. Happy birthday lady! 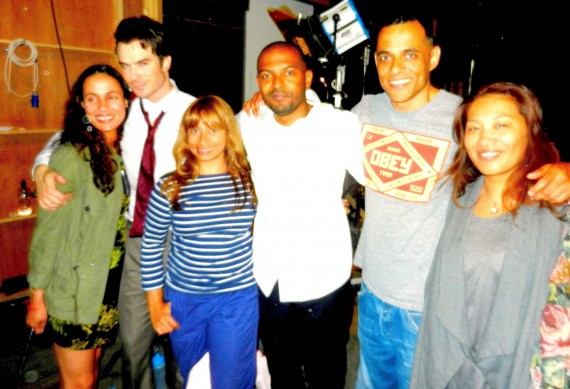 ON NOEL CLARKE’S LATEST FILM SET FOR THE ANOMALY WITH NOEL AND FRIENDS!
NOEL CLARKE FILM SET – THE ANOMALY!
One hot afternoon actor director and friend noel Clarke invited myself and a group of friends down to his latest film set in east London for his new movie Sci Fi thriller, The ANOMALY. I finally found the studio in the depths of the east end world, where a film crew who had all been intensely hard at work since 6am that morning, to get those all important shots, were still looking intense and passionate, huddled around TV playback monitors. Noel had insisted we come on the Thursday. I soon found out why. One actress said ‘’ooh you should’ve come yesterday-we did all the naked scenes and all the actors were running around with just tiny g strings on’’!!!. I smiled at noel and accused him of holding out on us all. Oh how we laughed!. Noels right hand on the film- Phil- showed us around the sets and studios when the cameras weren’t rolling and it was truly fascinating to see all the intricate work and cost that goes into every few seconds of a film. Working in TV, we film fast and air fast. Film needs a lot more patience, something I don’t have much of. Noel was particularly fascinating to watch as he multitasked like a champion both directing his cast as well as himself. His fellow actor Ian Somerhalder (‘Damon’ from vampire diaries), was intense in his scenes with noel and it looks like the final cut will be a great piece of work especially watching the off-screen camaraderie between ian and noel bantering all day long.
The screenplay by Simon Lewis, follows the travails of a traumatized ex-soldier who wakes up in the back of a van, alongside a kidnapped boy, only to know he has less than ten minutes of consciousness to work out why and how he got there. On set I witness high intensity action, a bit of sexy time and a huge aircraft ready for action. Next week they all fly to New York to continue filming. Noel continues to graft hard and break down those barriers. Salute mister Clarke! 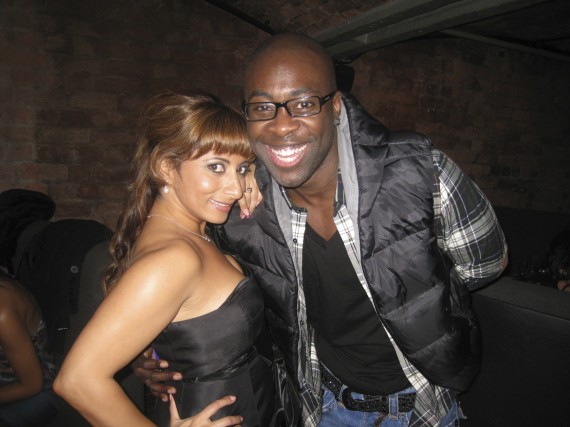 WITH KING HOST OF COMEDY SHOWS- KOJO!
UK KINGS OF COMEDY
Finally I attended the Hackney Empire for the UK KINGS OF COMEDY show at the weekend, when my former presenter Kojo, who was hosting the weekend, invited me. The show was back-to-back laughs with the best of the best! Kicked off by Eddie Kadi, followed by my fave UK comic Slim, the line up was completed by Richard Blackwood. All the comedians had fresh, very current jokes about everyday topics. Subjects covered included Tulisa, the Woolwich tragedy, all cultural nationalities, relationships, government and so much more. Sitting right in front of me in the stalls were actresses Jocelyn gee and Tameka Epsom. Also in the house were Charlene White, Music star Angel, actor Freddie Kruger, R&B group Fundamental,
You have to hand it to the UK urban comedy circuit. Bigger and better than it’s ever been, with sold out venues all across the country, this scene has gone from pretty good in the nineties, to slick, professional and a sustainable business in 2013. These teams put on regular shows with the type of punctuality and professionalism I don’t recall from back in the day. The new #TEAMUK COMEDIANS are really killing it. Whether they are on mainstream TV doesn’t even matter any more. The black pound is being taken and kept in the community whilst the corporate broadcasters are making repeated reality fodder with no ratings. Hilarious. On every level. Especially these talented artists bank accounts!