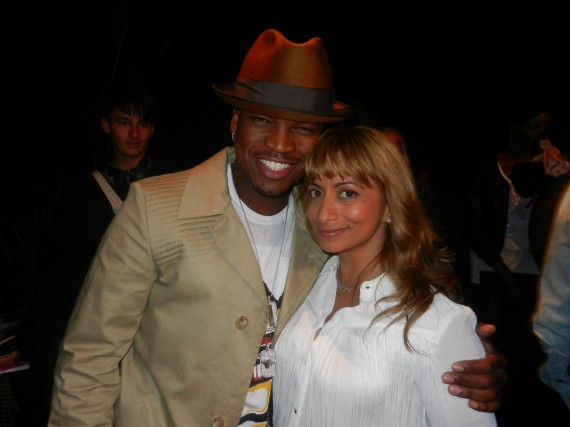 JASMINE WITH THE KING OF MELODY-NE YO
On the same night as the Haye-Chisora fight, I was invited to be a judge alongside a panel that included my mate, MOBO Queen, CEO and Founder Kanya King, Hackney’s home-grown chart-topping band Rudimental, Henry Village (CEO of Black Butter Records and others at Hackney Empire for a sing off between Hackney, East London and Harlem, New York. Two historic venues, an ocean apart, battled it out to find a new star on this night, which was the final of the heats that had taken place previously. Hackney Empire and the Apollo Theatre in Harlem presented their local winners on stage and National pride was at stake as the winning money can’t buy prize’ was a years professional mentoring, a soft release by Black Butter records, a trip to New York culminating with an appearance at the legendary Apollo Theatre in Harlem along with £2,000!
4 finalists from both boroughs went head to head with a live band onstage.
The night was hosted my Choice/MTV Base entertainer Kat B and Eastenders actress Tameka Empson who were both a great, very natural double act who looked liked they could bounce off one and another entertainingly for hours (someone give them their own show!)
I assumed this would be an X Factor style easy task with some acts standing out much stronger in vocal ability than others but this was not the case. They were all amazing vocalists! We had Nina Simone style jazz singers, up against John Legend-esque percussion player/singers, against Essex boy meets Mike Skinner type trendy singer rappers, meets gospel influenced powerhouses. ALL WITH AMAZING VOCALS! .
I tried to look at their stage presence. Did they own the stage? Were they marketable? Did they connect with their audience? Practically every single one did. What a dilemma! Colourful Radio’s Elayne Smith spun the music, then Kojo (UK’s comic maestro and Choice FM DJ) did his comedy set onstage I joined the other judges backstage to debate and fight for our top 3 which would then be whittled down to one winner. My top 3 were Jermain Jackman, Luc Burrand Jessica Symonds. I let the other judges name their top 3 and ultimately that decision juxtaposed with the live audiences text vote highlighted a winner who was Jermaine Jackman- a great gospel inspired, yet modern looking act that threw himself into his song and had the audience gasp as he took us on his emotional track ride with joy and excitement. Good luck for your Harlem appearance son! #TEAMUK’s got ya back! 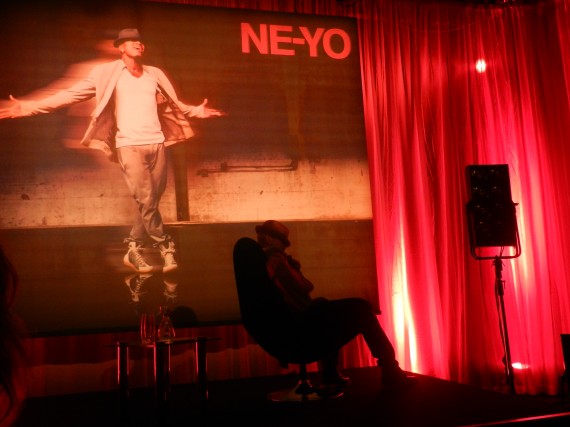 NE YO ONSTAGE AT HIS ALBUM PLAYBACK AT THE HOSPITAL PRIVATE MEMBERS CLUB
Next, my favourite melody king, Ne Yo invited me to a very intimate playback session at the uber classy Hospital private members Club in Covent garden for his new 5th album ‘’R.E.D.-released September 17th) realising every dream). We had to go through the usual rigmarole of handing in our phones and electrical devices before entering in case we were naughty music leakers. This is always a bitch as journo’s now write their news story notes in our blackberries/ iPhones and send these notes to our computers straight away for ease. The record label kindly provided us with NEYO notepads, which although cute just mean we write less, transfer less the next day at work as most of us have forgotten how to write with a pencil! anyhoo- we were led down some ‘’red’’ carpet lined stairs to the plush basement area which had been transformed into a red, intimate, sexy bedroom lit style atmosphere where silver trays of drinks and luvvy food like lobster burgers were being handed out. The vibe was buzzing, dark, sexy and opulent and showed the marketing department at the record label clearly take Ne Yo seriously with the amount of effort that had gone into this evening. There was a video bank of spotlights, massive billboards and LED screens and more. Attendees in the room included industry heads from capital radio, mainstream magazines, niche urban mags, and blogs and pirate radio. A great mix showing that the record label really does still have a grip and respect for the fact that hits are made on the underground and sold upwards to the masses and just a one-way street. Ethiopia Habtemariam the Senior Vice President of Motown Records who I’ve had the pleasure of working with many times over the years, introduced her act and Ne Yo bounded onstage in his trademark silhouette attire of trilby hat, baggy jeans, timberland boots, bling chain, bling earrings and shirt.
Ne Yo told us that at the age of 9 he had put aside his hopes of being a fireman and wrestler to dream about being a musician and now he really had fulfilled and realised his dream. ‘‘At 32 years old I have accomplished all my goals musically, as a father of a 2 year old son and 9 month old daughter and this album is a celebration of that’’.
He played us his current single ‘’let me love you’’ which made me chuckle. A few years ago when fellow now defunct R&B act Mario had a hit with the same song title-written by Ne Yo, I remember Ne Yo admitting to me that he wished he had kept that song for himself. Lo and behold a few years down the line he’s come back with a song he hopes will put that blip into balance. LOL. Whilst I love Ne Yo I will always prefer the version he wrote for Mario cos this new version has the current eurodance beat trend that drives me slightly nuts. eurodance was also heard in his song ‘’unconditional’’ . He isn’t stupid though and acknowledged this straight up ‘’I have diehard R&B and pop fans so I decided to make this album where both sides get equal attention’’. He played a few tracks to demonstrate. We kicked off with ‘’the cracks in mister perfect’’ which basically task about the fact that a music star cant have an off day and even if he’s going through something upsetting must at all times have his gameface on. He said ‘’ I know I have a negative human side and make mistakes and I’m not going to beat myself up about these’’. His track ‘’lazy love’’ took it back to an R&B vibe and discussed the kind of love that makes you drop everything in its early stages. We all acknowledged that awkwardly. I giggled as he mentioned he loved country music and was inspired by it to write a song called ‘’she is’’. He explained ‘’in country music you don’t have to be the coolest guy on the planet and can sing about a hound dog-there’s no pressure!’’. The track reminded me of a juxtaposition of Brian McKnight and Ed Sheeran. It was good. My favourite track on the album was ‘’it should be you’’ which reminds me of ushers classic ‘’you make me wanna’’ and discusses being with a person but wanting to be with someone else. (Is this an urban music art reflecting life scenario that’s very recurrent?)

I ended the week at the Hammersmith Apollo for the ice t movie premiere for ‘From Nothing to Something’’-where Ice T brought along his wife Coco to excite the fella’s, Public Enemy’s Chuck D brought the power by asking the London audience why with the deaths of Mark Duggan and Smiley Culture we weren’t fighting the power, Wu Tang legends Raekwon and Ghostface Killa had all the men in the crowd gassed and excited like little boys as they bounced around to C.R.E.A.M and legend Melle Mel brought his zootsuit game onstage to perform the best set of the night and then stripped to his vest to show off his still perky biceps!- all that and more that next week!.