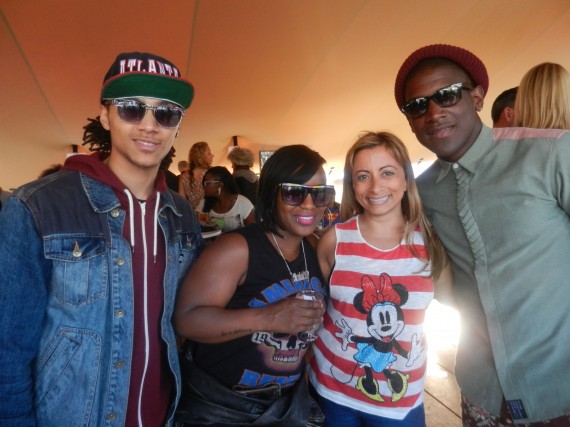 JASMINE AT WIRELESS WITH SINGER BLUEY ROBINSON, SINGER-SONGWRITER CARLA MARIE AND MUSIC STAR LABRINTH.
I predicted it even before it was a public issue. As I stood in swampy mud of my beautiful Hyde Park I tweeted ‘’I am really concerned about the grass-its ruined’’. Next thing you know all immediate future events at Hyde Park are cancelled. The whole wireless weekend was an eye opening experience!
I have attended this event since its inception and its usual full front of house and backstage in the VIP with very trendy, fashionable classy types. People who want to show their status in the music industry and their great taste in fashion. It’s usually an event where the who’s who wear their what’s hot. This year that all changed. Wireless festival is usually the lightweight of all festivals but this year the action and fashion was outta control!
I spotted batty riders on women of all shapes, sizes, class and cultures- it was, putting it mildly a horrific assault on my eyes. A young un informed me that the new trend was to ‘’show a bit of your lower bum cleavage’’ hence the influx of assholes.
Their brain cells had obviously all fallen out of their butt cheeks too as in torrential rain, mud, wind and crowd turbulence many girls had opted to go for sandals and flip-flops to adorn their feet in? One thing was truly apparent. if you had chosen anything other than willies to wear that footwear could only have been destined for the bin after this day.
Luckily before leaving home, I was persuaded by my mate and twitter followers to rock willies cos the level of mud was crazy and swamp like and any footwear aside from wellies could only have been relegated to the bin afterwards.

Grass and rain equal mud sweeties and the number of toe nails we saw filled deep with mud made me want to heave. Many of the young crowd were clearly intoxicated by 3pm and were jumping, splashing and partying hard in the mud and even though I felt bad for the girls who looked ready to cry after their sandal/heels dilemma’s my bad mind side did still laugh hard at them and twitpic their feet blatantly. 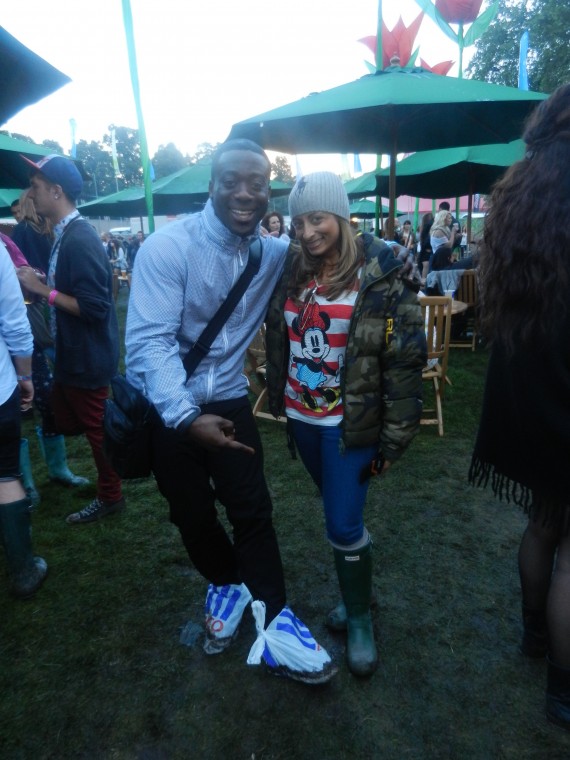 It wasn’t just the female music fans that seemed to have gone doolally, the men had gone all wild too with your average homeboy who usually baulks at the thought of his white sneakers getting a scuff on them., were now topless and doing backflips and rolly polly’s in the mud!
Backstage there were a few diehard homeboys with plastic bags wrapped around their trainers- I laughed and teased ChoiceFM’s DJ Abrantee in his Tesco bags. How does that work? Do you carry a few round in your pocket for these just in case scenarios? And why not upgrade in hip-hop one-upmanship to marks and spencer’s-that would be the pinnacle with the luminous green foot look no?

Rapper K Koke (of Greek Cypriot descent from Stonebridge, North West London) and his entourage all looked slick yet uncomfortable in their pristine trainers, as if they were too timid to step out of their dry backstage patch of grass and mess them up. It was nice to see him pose for a photo with X Factor star Misha B. Team UK have come a long way with mutual respect between acts of different sexes and genres. 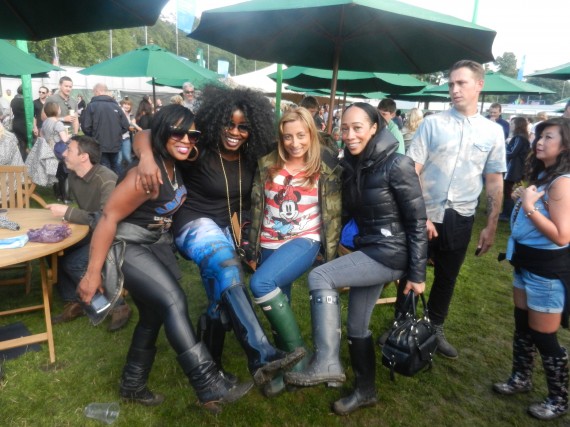 JASMINE WITH SINGER-SONGWRITER CARLA-MARIE AND MUSIC STAR MISHA B…

Misha B was running around with singer songwriter Carla Marie. Misha such a star attraction you’d think she was headlining the bill. There was constantly a line of fans queuing to take a photo with her and she graciously, happily and delightfully agreed to pose for pics with everyone.

I ensured that I caught new kids on the block Rizzle Kicks set. These guys have been like a breath of fresh air to the young British music scene with their catchy music hooks and unthreatening lyrical sway. One minute they were unheard of and the next-due to their very connected, beautifully mannered and professional manager-Joey-are everywhere. I had lunch with him a few months when he informed me he had signed these 2 young Brighton lads and was hoping to develop them slowly into the industry. 3 days later I heard them on the radio 1 playlist. Fast work by a star manager in the making. And from a totally selfish point of view, for me its great to have an example of a young act of colour that doesn’t fit the usual stereotype that I can push in wider circles. It’s all about breaking down barriers and perceptions and Rizzle Kicks more than did that at Wireless.
They jumped around in the rain and had all the family singing along to every word of all their hits. Their hits ‘Mama do the hump’ and ‘Down with the trumpets’ had kids in their willies splashing mud on each other with wild abandon the likes id never thought I’d see in London’s Hyde park! 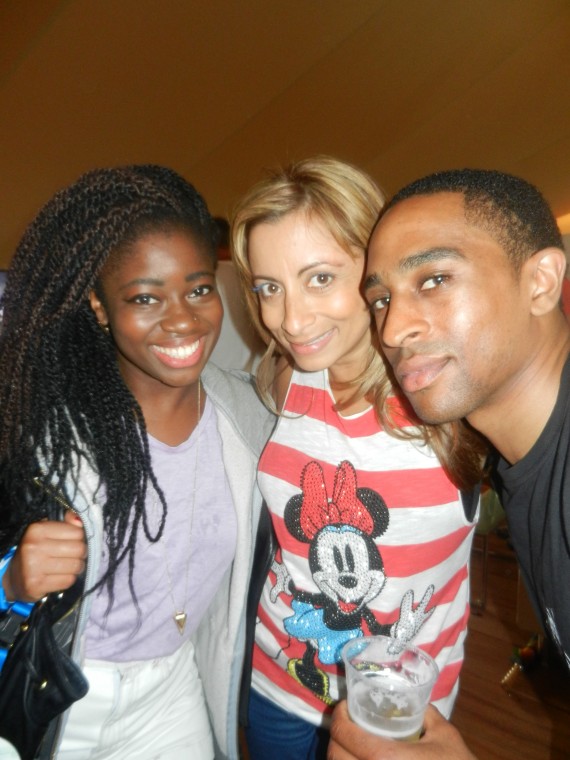 JASMINE WITH KISSFM YOUNG STARS AJ AND CLARA
.
Once it starting bucketing it down with rain I was more than grateful to be in the KISSFM VIP area where they were serving free drinks and a bevvy of fresh deli style food. A great thing as the public food stall food prices were extortionate! In the evening they also served hot mini plates like fish &chips and rice and veg options too- very classily done! 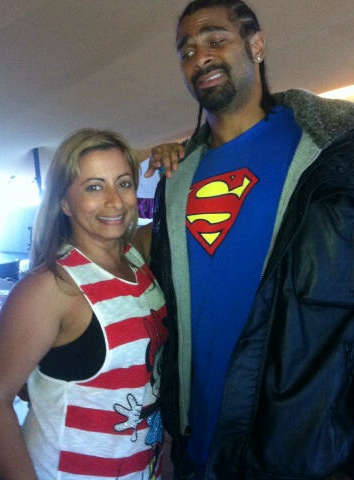 JASMINE WITH THE CHAMP- BOXER DAVID HAYE!.
Other folks glad of KISSFM’s hospitality included boxing champ David Haye who wandered around the festival as cool as you like with no security just a couple of his mates. We chatted for a bit and as I watched him eating the rice and veg I thought ‘’eek should you be eating that a week before your Derek Chisora fight?’’ Then I remembered- David’s a pro and totally knows what he’s doing. Whilst in the Kiss area a multitude of excited lust taken girls flocking around him but at all times he behaved like the ultimate gentleman as we all cooed about the fact he was such a dish!
Clearly the only place to be was the kiss area as next through the tent doors were chart stars labyrinth and Bluey Robinson who greeted each other with joy and hugs
Kiss on air radio talent Melvin Odoom and his co-host Asian honey DJ Neev were running around filming and conducting interviews. Younger KISSFM talent like DJ AJ and Clara were on hand to meet and greet and generally entertain us all with their charm too. (Although I did have to tell AJ off by making me feel prehistoric as he stated innocently ‘’ooh you’re one of the music industry legends I’ve followed for years!’’
It was lovely to catch up with one of my old MTV bosses Virginia and talent team babes Anna at the MTV VIP area. It’s the first time they had a specific area and presence at wireless and was a big look for mtv uk!.

Rain or no rain the drum n bass and dubstep DJs had the crowds going wild!. Similarly Jessie j looked great, much better without her fringe and really brought the energy levels up with a lot to prove now she’s a national TV judge. She didn’t disappoint and her set was energetic, lyrically strong and she really brought the audience levels up-a true class act.

Bajan beauty Rihanna really swung it home with her headline set. Considering this past month she’s fulfilled practically every tour date since her grandmothers deeply distressing passing away, you had to give it up for her strength and show must go on mentality. She had a great Egyptian themed set from this year’s tour with full on lasers shooting out of the giant pharaoh’s eyes, and male dancers in structured historic costumes. Her look was influenced by but hardly traditional with big granny knicker shorts and a very on-fashion studded cropped top that teasingly revealed the bottom of her breasts every time she starched up or jumped. Her doc martin boots weren’t Egyptian as far as I know and her black leather baseball cap had a serpent sliding along the top. She completed the look with a huge mass of long black curly hair. The wig looked dramatic and wild as she flung her head around and no doubt kept her warm in the chilly relentless rain of the evening.

A couple of days later I was lucky enough to see one of my favourite acts ever-miss Jill Scott perform at Somerset House which once again though drizzly was well worth it. We were well entertained by support act Daley that was an amazing starter.
After a while the crowd started calling out for Jill. The atmosphere was electric; there was excitement and great anticipation growing. Come rain or shine we were all ready to feel the love. Jill came on stage at 9.30pm, the crowd including me went mad. There she was in her orange and black tight leggings and long top suit looking every bit a real woman. Then she started singing – music to my ears. Strong, confident, energetic and ready to rock the crowd. I can’t tell you which tune was the best as they were all great. Jill has a way with words, sexy, sensual, soulful and then switching to rock was amazing, amazing, amazing. To tie the great moments of her fabulous voice and music together, I loved the way she interacted with her audience. She kept us entertained throughout. She spoke to us, read a poem, told jokes included her backing singers and band; she even put a wig on for laughs. Jill Scott is like the little black dress you have in your wardrobe – Timeless .An amazing experience and one I will remember and add to my memory bank.