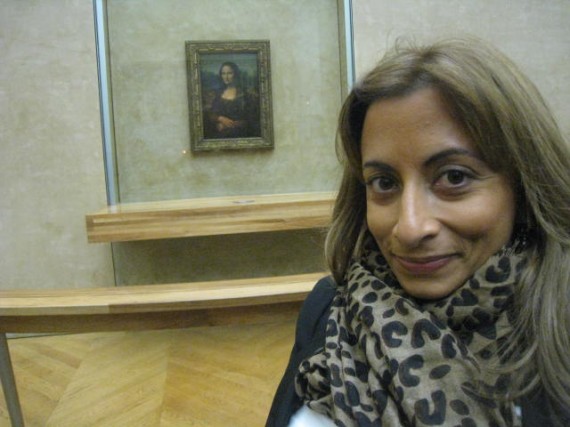 ME. TRYING TO FIGURE OUT HOW TO SLIP THE ‘MONA LISA’ INTO MY POCKET DISCREETLY.
Bonjour readers! I’ve just returned from a short break in Paris where I experienced 4 very extravagant days and nights which included showing a Paris virgin (someone who’s never visited Paris-not a sexually inexperienced Parisian!), the sights of the city!
The Eurostar tipped us out at the infamous gare du nord train station and a taxi scooped us up and delivered us to our hotel based in the trocadero district in the 8th arrondissment just off the world famous champs elysee. We spent days exploring the Louvre where my friend pondered how difficult it would be to steal the Mona Lisa painting, taking silly photos in front of the Eiffel tower in strange perspectives that make it look like we are touching the tip of the tower, and walking into every designer store along the bling covered rue saint-honour exciting the assistants by insinuating we were buying up the store, especially when we walked into D&G with American music star Florida!!
We had 3 extremely expensive dinners at opulent establishments, the Buddha bar (extremely stush, great setting under a giant Buddha-but awful food and service), KONG restaurant (designer / architect Philippe starks place-stunning ariel views, sexy venue and people and amazing food!), and finally my favourite-L’Cantine- (a very sexy restaurant with a live dj playing classic soul and r&b as diners dined in a beautifully decorated modern dimly lit sexy venue). Things I pondered whilst out there; is it a requirement by law that every French citizen wear a mon clare puffa jacket? Has anyone tested whether raw minced meat eaten as a French delicacy can cause food poisoning? Is wine a mandatory accompaniment with absolutely EVERY meal? Do French kids have style genes from birth that mean they look as if they were styled by a vogue editor? Why are Japanese tourists so obsessed with Louis Vuitton clothing-the stores looked like a rave was in full swing with 24-7 queues outside? Are most French people rude to the English or is it just that they refuse to try and communicate with us in English? Can we teach British cafes how to make real hot chocolate the way the French do with real cocoa? Do the Paris tourist board realise what a faux pas it is that they demolished the café outside the Louvre that Carrie Bradshaw visited in sex and the city? Did you know that Frances president Sarkozy has real big pimping merit- no one is allowed to toot or beep their car horns at any time outside his residential palace in case they wake him-now that’s gangsta! Hilariously French taxi drivers explained to us that the British, American and Japanese embassies were so stingy they didn’t want to pay towards the rue saint honour Christmas lights all the way down the street outside their buildings hence the beautifully lit street is all unified in twinkling decorations until you arrive outside these 3 buildings where its just dead as if Christmas forgot it! Idiots guide to Paris tourist tip; flag down your own taxis as the concierge requesting it for you incurs a 15-euro surcharge before you’ve even stepped into the car!

SWAY, ADAM DEACON AND BASHY WITH US AT CITY HALL!
Before that though London was a buzz with the London 360 event at city hall where we began with a drinks reception before escorting everyone into the main city hall amphitheatre chamber for a talk and screening of the highlights for series 1.

TREVOR NELSON, ADAM DEACON, EDDIE NESTOR AT LONDON360!
Supporters like Alesha Dixon, Trevor Nelson, Eddie Nestor and I spoke in the Mayor’s chamber in front of an audience of 300 of London’s movers and shakers. The event was to celebrate London 360 series 1 and its impact on the residents and stories about London’s communities.

LONDON360 SERIES 1 AND 2 REPORTERS WITH ME!
Reporters from series 1 and 2 talked about their experiences. Trevor emphasised his love of London and why a show like this is necessary. Organisers from a variety of organisations like Orin Lewis from the ACLT explained how involvement in getting his story out there had helped his profile and Eddie Nestor spoke about the career progression for our reporters from TV to radio and beyond.

ACLT’S ORIN LEWIS WITH ME AND MY L360 REPORTER FUNMI OLUTOYE.
Many of our reporters have gone onto a wide variety of jobs within the media like Sky News, ITN, the Jeremy Kyle show, Tiger Aspect production company, SBTV and Shine TV. Many of London’s most influential press and bloggers (Grimedaily, the Mactwins/Hub entertainment, 3AM girls-The Mirror, THE VOICE, OHTV and more) scrambled around at the end to grab press interviews with acts like Sway, Bashy, Princess Nyah and the big wigs that run London from City Bridge. If you know any youngsters between 18-25 years old that want a start on their media career ladder get in touch with me at hiphop.com! We are London-. People. Powered. Change!.