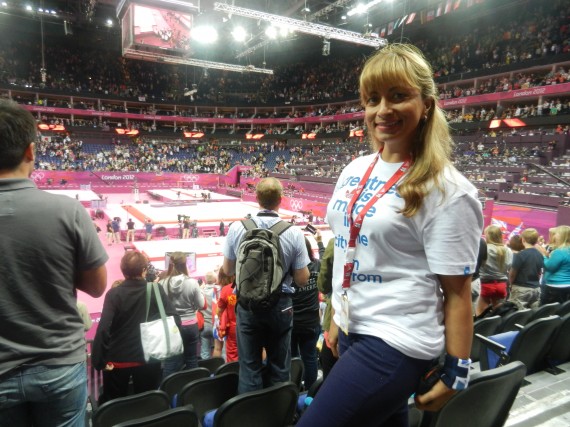 JASMINE AT THE GYMNASTICS TEAM FINAL AT THE LONDON2012 OLYMPICS!
I am a believer that when you truly believe and put a message out to the universe that you want something, that god delivers. Last Tuesday this happened when my friend and business colleague at Adidas called to ask if I could get the afternoon off to attend the Olympics. Now this is a rhetorical question that surely needs no answer? I am there!
I caught up with a few of my pals before I got there to chat about the monster that’s taken over our city.
Former London mayoral candidate Siobhan Benita hit the nail on the head when she told me ‘’I don’t think tickets been as inclusive as they could’ve been and should’ve been think for Londoners,in particular it’s a real shame that the tickets weren’t more easily available, as the costs have fallen largely on Londoners. I was proud of our opening ceremony though. It was interesting because Beijing was so spectacular just because of sheer numbers of people who were involved but that reflects China.I think we played up more the fact that we’re small and mighty rather than very big ’’.
Rapper/ activist Rodney P ‘’There has obviously been an issue for ticketing for the Olympics a lot of people are left disappointed. I know a lot of people have issues as they didn’t get any tickets but I’m waving my little GB flag because I got mine. I would like to see England bring in as many gold medals as possible apart from the medals that my heritage country Jamaica will win’’.
That considered, I realised that most of us have a ‘’2 -nations-loyalty’’ to both team GB and our mother/fatherlands. Mine is Kenya/ India and I know the long distance runners and table tennis respectively will take my support at those events. Rodney’s heritage is clearly Jamaican and he enthused ‘’There is a conflict of interest for me and many people when the Olympics come to town, but the good thing about London is that it is such a cultural melting point there’s so many people that have connections to other places in the world so with the Olympics coming here it’s a good time to reconnect and re-energise. Yes there will be a certain amount conflicts of interest but at the end of the day it’s all about putting on the best event that we can’’. Rapper Sway wasn’t as bothered as Rodney with supporting any team in particular laughing ‘’I’m from Ghana but born in the UK. When it comes to the Olympics I don’t feel conflicted, I’m supporting anyone who’s gonna win [laughs]. Big up to Ghana, athletics is not really Ghana’s strong point’’. 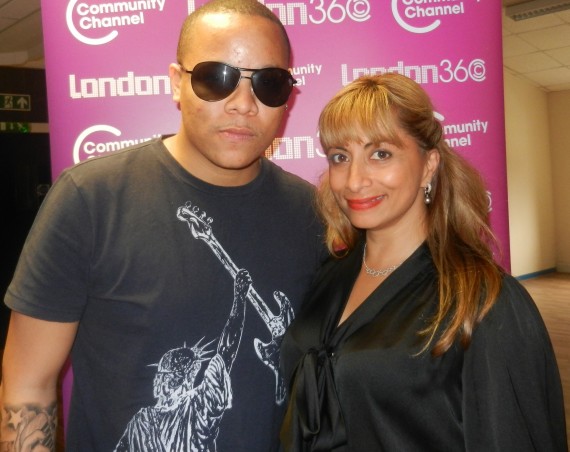 JASMINE WITH TEAMUK’S DJ IRONIK
DJ Ironik agreed with Rodney shouting ‘’I’ll be supporting Jamaica, ‘cause that’s where my family are from. Obviously Great Britain occasionally, so yeah, Great Britain and Jamaica’’.
Rapper and activist Ty stated ‘’ as a black person living in the UK, it’s absolutely automatic that you learn to have dual understanding because we just live here. We’re not English, we live here. So as far as supporting Team GB, automatically I support Team GB. If you’re playing football then I expect you to lose, but if you’re in the Olympics then I’m always behind you. As far as the Nigerian team, I support the Nigerian runners, as a black person I think I can definitely support more than one team, living in the UK and coming from a multicultural background. You have to back Nigeria at some points in your household, if you want to live and eat food!. But realistically speaking, I tend to go for what I like, I’m really into gymnastics and I tend to support Olympians like the Russian gymnasts – I’m a fan of what they do. So I don’t tend to just focus on colour. I stick to things because I like what people are doing’’.
Singer and mother Shola Ama likes what its done for her son ‘’I think its great that the Olympics are on our doorstep and I like the positive message that it sends out to young kids. My son is the kind of kid that idolizes people so I think it’s a positive message, and I think competition is healthy’’. 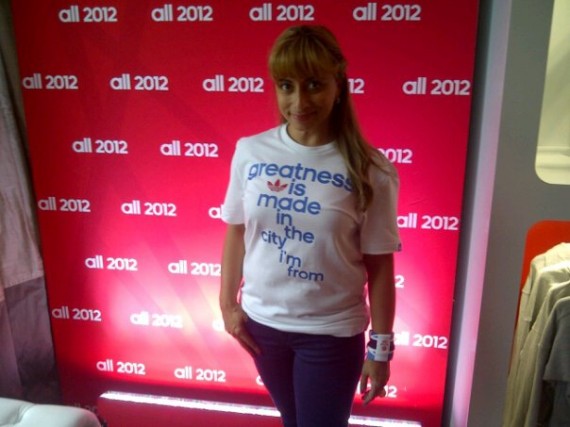 JASMINE AT ADIDAS HOUSE WHICH WAS FULL TO THE BRIM WITH A LISTERS!
With all those thoughts in my mind I thought ‘’this is a once in a lifetime opportunity in my city and I’m going to be there. Luckily I have a cooperative team and boss who were happy to give me the afternoon off and so was able to run down to ADIDAS HOUSE based in St Paul’s where many celebs were popping in to collect their olympic tickets and outfits-i bumped into Wiley, Lilly Allen and Beverley Knight. after being gifted some patriotic TEAMGB clothing we all legged it to the North Greenwich Arena and got there in time for the best seats in the house for the women’s team medals in the gymnastics.
I was totally impressed beyond belief at the volunteers outside who had happy smiling faces all the time and continuously cheerfully pointed out which way to go, and generally made the atmosphere one of Disneyland with their regular pointing out of supporters from different countries and fun antics. As soon as you exit the train stations you cant get lost, feel sad or fail to smile! What a great job these volunteers are doing and for free too! I was really proud to be a Brit! Even better the shops in the 02 Dome were doing crazy fast, manic business. Every store and restaurant was full with queues going out of the doors! Every few minutes there is excitement as teams and athletes walk through the area to mighty cheers and frenzy for photos.
Once inside readers, it was amazing. Even better than on the telly. I was left awestruck watching tiny, lithe, young gymnasts from across the globe put their game face on and really represent for their countries under immense pressure!
I was sat next to Beverley Knight and her friend DJ Munro. We were all gobsmacked at the focus and skill of the young athletes. There’s so much you don’t see on TV. All the 4 skills of asymmetrical bars, floor work, vault and beam are performed simultaneously so you have so much to watch you’re not sure where to look. The music for the floor routines is loud and must totally distract the other 3 competitors in the extremely close vicinity. Much of the music was dynamic, fast and a few gymnasts chose James Bond anthems like ‘’live or let die’’, which highlighted the Brit influence in the arena. The crowd were very enthusiastic for their respective athletes with the USA and Chinas definitely winning the competition for most enthusiastic supporters en masse with flags, whoops and a million ‘’awesome!’’ yells. (I think God invented the word AWESOME just for the American nation as its out of their mouths every other word!)
It was very exciting seeing all the warm up sessions where gymnasts run, flip, tumble and stretch before the commentator announces in his big booming voice ‘’gymnasts, warm up is over, prepare to compete!’’ That moment is like terror striking, at that state where you see the close up expressions on the athlete’s faces, its clear it’s their once in a lifetime moment. It’s the Eminem line that comes to mind ‘’you only get one chance, do not miss your chance to prove, cos opportunity comes once in a lifetime’’
In all honesty, whilst we were cheering hard for the Great Britain team it was clear that their champ swagger was not on a level of our competitors. I’m not all clued up on the gymnastics worlds but stand out talents for me definitely included Gabrielle Douglas and her team mate Jordan Weiber from the USA team. Our girls are not just bigger, rounder and taller in stature than their competition (in a skill that requires them to be as tiny and lithe as possible) but seemed to lack the death stare and winner attitude of the cyborg like focus of their competitors. They looked like your average round the way girl who might live healthy and train hard but the body shapes are testament that the Brits have something in our water that just makes us seem more out of shape. Their performances lacked confident and conviction, something the Americans and Romanians oozed from their little fingers. Even British gymnast Beth Tweddle admitted that she and her teammates acknowledged that they were way under qualified to be up against their Russian and American peers. The competition’s attitude was ‘’we’re the best and we came to win’’ and that energy infected the spectators and clearly the judges too. I’m in no doubt I couldn’t do any better though and totally respect the daily sacrifice that these young people put into representing our country, I’m just wondering how we can look to stepping up our collective game and not constantly take pride in being on the losing team.
Having said that, how amazingly are we doing now as we stand 3rd in the medal table?! For a tiny county not even the size of one of the USA’s or Russia’s states, we are punching well above our weight when you consider the base pyramid of sheer people numbers these countries have to choose from and train up! GO TEAMGB! SO PROUD! 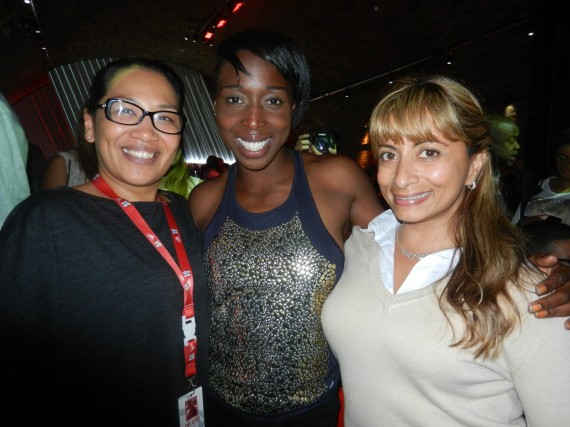 JASMINE WITH ADIDAS HEAD PAOLA LUCKTUNG AND TEAM GB ATHLETE JEANETTE KWAYKE AT ”PERSONAL BEST” FILM SCREENING.
That night I attended a very VIP, invite only screening of sporting focused film ‘’Personal best’’ in Shoreditch made by Sam Blair. Filmed over four years, Personal Best follows up-and-coming British sprinters on their journey from the grassroots of athletics to the international stage. The film is both a gripping portrait of the athletes in training and competition, and a deeply personal account of their lives unfolding revealing victory, defeat, agony, ecstasy and the simple trials of growing up. On the eve of the 2012 Olympics, this film tells the stories of Britain s young sprinters as they strive towards their dreams. This is an inspiring but genuine portrait of Britain s youth and a penetrating study of the art of sprinting, peeling back the layers so we can finally understand everything it means to them as they wait on the start line for the gun to fire. Starring my home girl Jeanette Kwayke, James Ellington, Richard Alleyne, Omardo Anson. Jeanette is inspiring and humble to watch. Richard gets over a knee issue to continue striving, Omardo uses sport to take him away from a negative life, and James is fascinating to watch.

JAMES ELLINGTON!
He’s gorgeous and seemingly unaware of the fact. He’s a new young father so juxtaposes his soft caring side as well as that of a warrior on the track. Whilst most ladies are swooning over team GB champ Louis Smith, I’ve switched to my new younger cougar crush- James Ellington! Louis is for the girls, James is for the women! catch the film if you can. It’s a really great watch and shows the personality traits winners need to possess!