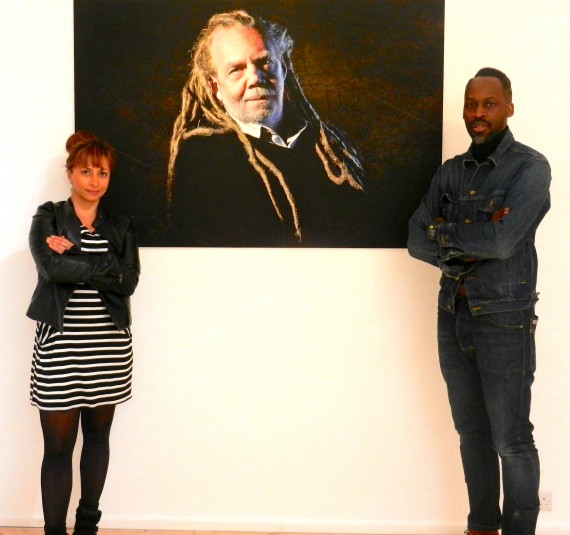 JASMINE WITH PHOTOGRAPHER SIMON FREDERICK AND HIS PORTRAIT OF GORDON MAC.
In totally unconnected circumstances this week a variety of friends from different social groups have asked me “why do black writers/ artists/ painters/ creative businesses have so much difficulty in getting mainstream recognition. I think its cos we don’t think big. Really big. Really commercial. Use all our connects and hustles. There are people that focus so much on their art but not getting it out there. Remember that old saying ‘”If a tree falls in the woods and no one is around to hear, does it make a sound?”? Similarly you could make the best album in the world, write the best book, be the best at what you do, but if no one knows about it who will be witness to your talent? If you are happy to create for your personal contentment then fair play but if not-GET IT OUT THERE! 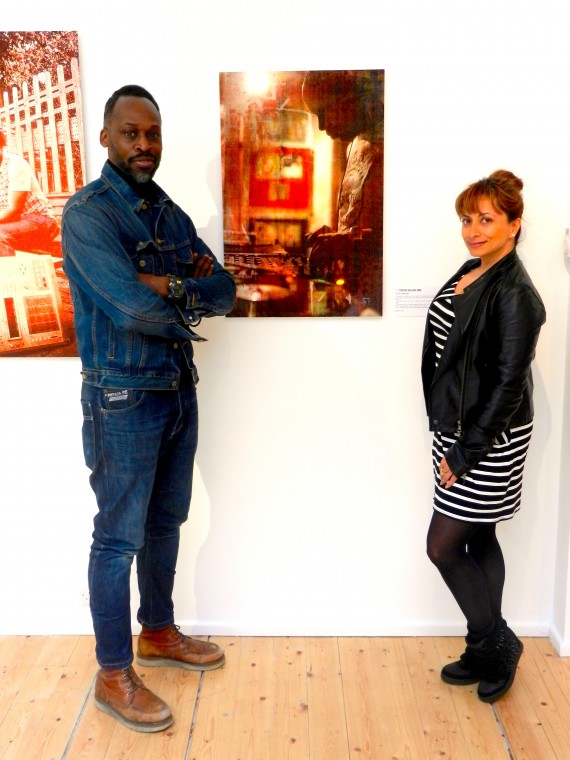 JASMINE WITH SIMON AND HIS PORTRAIT OF DJ TREVOR NELSON.
I attended a photography exhibition for an old friend-photographer Simon Fredericks whose work “My friends at work” was also my mates at work too as we share similar social circles.

Simon had photographed people like actor David Harewood, actress Sadie Frost, broadcaster Trevor Nelson, former KISS Radio head Gordon Mac, freelance PR Jodie Dalmeda and Puma head lady Lisa Buchan and more, all shot in their working environments. He then added a variety of effects to the photos giving them a canvas painted feel and look. The final effect is stunning and powerful.
The Gallery Different in Percy St held a launch attended by most of the artist’s subjects and was covered by the Daily Mail newspaper and more.
Whilst being given a private guide around the art by Simon, I commented that one portrait was extremely strong. It was of Saville Row tailor Mark Powell. He looked tough,confident and ballsy. As fate would have it right at that moment Mark entered the gallery looking exactly like his character out of a Guy Ritchie east end drama. Cool as f*#* and his personality was just as cool and cocky as I love a geezers to be! 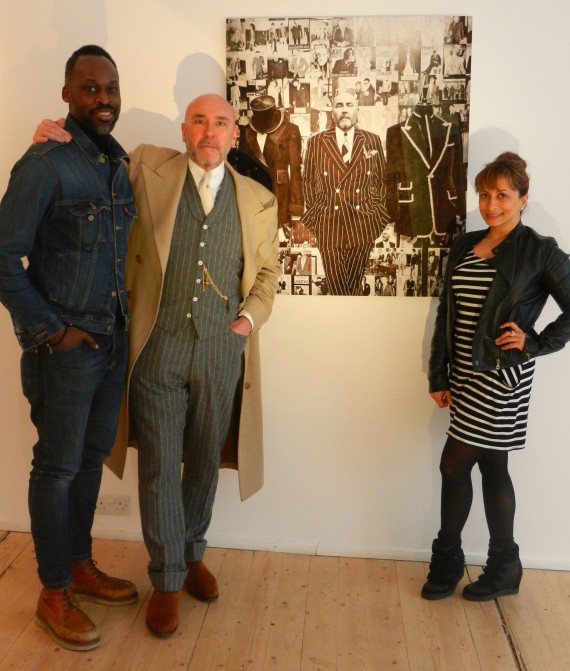 JASMINE WITH SIMON AND HIS PORTRAIT OF SAVILLE ROW DESIGNER MARK POWELL…AND…MARK POWELL!
In an era where the extremely wealthy elite class have had enough of cribs, rides and bling, I can truly see portraits being the next on their acquisitions list starting with a “Frederick”. Warhol? Who’s that LOL? 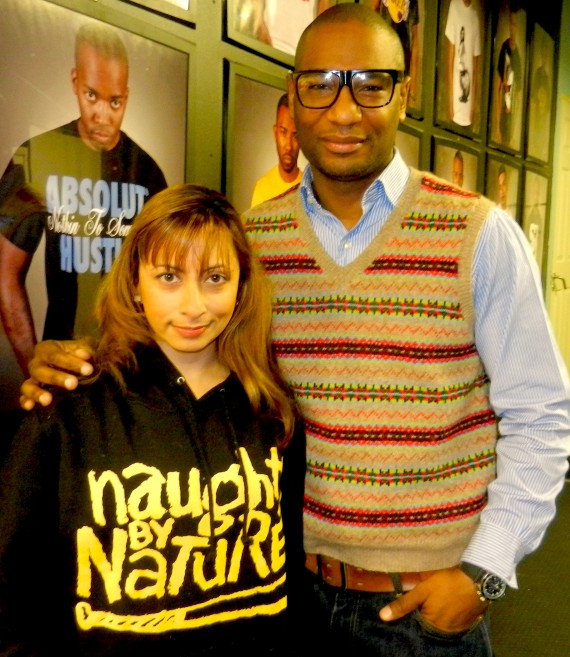 JASMINE WITH ACTOR LONYO.
Next, I woke up one morning to find my mate that lives up the road from me, who used to be an MC (called Come Ci Come Ca) on the mic at parties when I was younger, made a classic UK urban hit song called ‘’Summer of love’’ years ago, had become an American small screen star overnight! I keep seeing actor Lonyo Engele’s face all over posters , my American friends facebook timelines and trailers for current American smash TV series The Bible which aired on the History Channel.The miniseries was watched by 13.1 million total viewers, according to Nielsen.
You may recall me telling you about Lonyo last year making his acting debut in a film titled David is Dying ,which I caught at the BUFF FILM FESTIVAL. (British Urban Film Festival). He was a real stand out talent at that. David is Dying went on to win a Screen Nation Best Actor award ‘’the day before my birthday’’ beams Lonyo smiling in pleasant recollection ’’it was a great moment’’. The film also went on to win an American Black Film Festival Award and is the first British film to film that distinction!
Lonyo then broke down how he got his current big break ‘’then I went for an audition for The Bible. I actually get flown out to Morocco for it. I auditioned for 1 of the kings parts. At the same time I was also filming a BBC drama ‘’New Tricks’’. I got all this via my agent at Identity Drama School –his name is Femi. It’s the Number 1 black agency in the country and gave me a brilliant progression route to where I am now’’.
Lonyo alas didn’t get the role of the king but revealed ‘’I got a call saying I had got the guardian angel role. So I was flown to Morocco again for 6 weeks filming the part ,which Included 2 weeks of sword and stunt training. Clearly I had to know how to hold a sword for the role. The other angel was a world champion swords man so I had to really step up and focus’’.
The Bible series is made by British husband and wife team Mark Burnet and Roma Downey (responsible for numerous other TV smashes like Apprentice , Survivor, The Voice)…
When I asked which famous Hollywood style names were also in the show I was told ‘’the cast is an “international ensemble” chosen to avoid “distracting the audience with recognizable celebrities”; “many” of the actors came from a background in London’s theatre district.
Lonyo told me ‘’”My role is to deliver the message to Abraham that he’s being tested and to let him know that we’re going to destroy the city of Sodom, I was quite familiar with the Bible before. I go to church. But I had to re-familiarise myself with it. When it came to acting I Haven’t had much training and I’m still in training now. I had to go with my hunches. One hunch didn’t go well when I tried to act a bit cockney”. The Director was like “ummm less cockney please” lol “My script was juicy with lots of lines and action and we finished filming last year, it was on air in the USA throughout March but now there are plans to take it worldwide.’’
Talking about what’s next Lonyo humbly mentions ‘’at the moment I’m still finishing my next course of acting school and am in a play. I’m also having voice training for acting for the American market and my American accent is poor LOL. But having these past projects behind me will all hopefully help my future career on screen’’.

Smiling about his now regular red carpets and interviews by press he shrugs ‘’its all ok as I’m older now and had experienced that stuff when I was a musician. I prefer to work. But winning awards for acting is great. I don’t find the barriers are up there in the acting world the way it is in music due to my age. In acting you can start at 40-in pop music that’s well past it’’.

Lonyo revealed he still has fingers in many business pies; he is making documentaries and so on. He finishes with this classic quote ‘”Evolve or become extinct!”
His director Mark Burnett said ‘’regards THE BIBLE airing outside of America, Now we’re about to start around the world. This will be in every country of the world. More people will see this series than everything we ever made; together, combined. Billions of people will see this series. Billions’’.
Get ready people- west Londoner Lonyo is biting at the heels of Idris and will no doubt be a big name on your screens very soon.