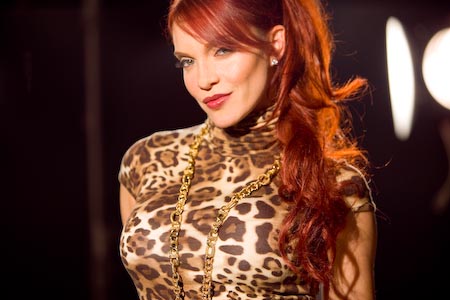 CARMIT BACHAR-PULSE TOUR HOST, FORMER PCD AND ”MOMMY!”
Girl bands. They come. They go. They usually don’t stand the test of time. Alas, once many achieve group fame and success they can’t go the solo road alone.
But it’s a new day. Women keep their fingers in many pies. Their cups are not half empty or half full, as generally, they have a numerous cups. Multi tasking is the name of the female game.
Not long ago, Pussycat Dolls went from a Hollywood burlesque troupe to dominating the pop charts. For a short while. But then music bigwig Jimmy Iovine, decided to scoop the lead member up and catapult her to solo stardom and we assumed the rest would scatter by the wayside never to be heard from again.
But no- PCD’S Ashley Roberts joined the reality TV show path with her appearance in ‘’I’m a celeb get me out of here and Carmit-the fiery red head with attitude and a saucy smirk, kept on keeping on with juggling all her cups.
Thus far she is a relatively new mother, with a 2- year old toddler and hosting a dance tour all over the globe. This week that dance tour hits London.

Don’t get it twisted though this isn’t just any dance convention. This is the elite of dance conventions.
Imagine if you will in the music world, record label heads like Russell Simmons, Clive Davis, Jimmy Iovine, Tommy Motola and Kevin Liles travelling the world sharing their knowledge with the musicians of the next decade. Or celebrity chefs Delia Smith, Marco Pierre White, Madhur Jaffrey, Gordon Ramsey and Jamie Oliver travelling altogether on a cooking roadshow. Well this is the one the younger generation wants right now-the Pulse Tour!

Dance has never been bigger. As a child, like many other kids, I rocked up to my part time ballet, tap and jazz classes, but back then it was considered elite and niche. Now with a million global TV show competitions, hip hop dancers teaching class at gym chains and more-dance is cool! Refreshingly as many males as females want to dance. Look at Flawless and Diversity!
This weekend the biggest buzz for London’s youth and young adults is for the Pulse Tour at Olympia in West London. Tickets are selling like hot cakes for the classes, which are led by the crème de la crème of the dance world. Every dancer has heard of these very strong dance personalities.
Cris Judd came to light after dating the infamous J Lo, but is a very established choreographer in his own right. Next we have reality TV star and choreographer to all the stars- Ms LaurieAnn Gibson. X Factor straight talking dance guru Brian Friedman and last but not least an incredible dancer- former fiery redhead pussycat doll Carmit Bachar! I caught up with Carmit a few days before the tour kicks off to discuss both of our first loves-the world of dance!

After congratulating Carmit on motherhood and her incredible journey back to showbiz, I confided in her that I was extremely jealous that as a young dancer years back I didn’t have anything as amazing as the PULSE TOUR in London.
She laughed ‘’All of us on the tour say we wish this was around when WE were younger, this has been going nine years in the states but this is our first year in London. Our faculty has around 12 of us and we have our own strong niche in the industry, it’s the premier dance convention that exists right now. If you’re aspiring to be a professional dancer then this is the tour to come and take part in’’.
Each teacher is not just famous, but has their own very unique style of teaching too. Carmit summed it up thus ‘’ with Brian-you never know what you’re gonna get, he’s very detail orientated, fast, always technical but fun! Criss Judd is very stylised, you almost have to wear a fedora whilst doing his moves, you can’t teach it but practice until it sits in your body. Laurie Ann- you never know with her either as she comes from an Alvin Aliey very technique oriented base but she also has her base in the hip hop world , as well as that she works with Lady Gaga and is very jazzy –she’s about the feeling. Me? I’m more on the sassy side like my former PCD style, a mix of street and sexy stuff, I call it sexy street sprinkled with technique-I like lines and flow!’’.

This powerhouse of dance influencers and names came together out of mutual respect ‘’ We’re like the dance power movement globally, we’re friends, family, we’ve grown up together, and have mutual respect, We still take each others classes and we feel honoured to pass down our experience to the next generation of dancers now and you never know what could come of attending this tour. For example, Brian often teaches and if he spots new talent that he likes he hires them for X Factor in the USA!’’.

Back in the USA Carmit has been multi tasking wildly; hosting Pulse Tour conventions, her latest music project- a female duo that she’s a part of called Lady Station and being a ‘‘mommy’ ‘Being a Mother to a 2-year-old baby daughter has been totally worth it. I had a baby! I’m in heaven! It took me out of the game for a minute but was so unbelievable. It’s difficult to juggle, and yes, it would probably be easier for me to have been a housewife, but I’m fortunate to have an incredible partner, we’ve been together 14 years. He’s also in the industry and we share the responsibility, she’s with daddy right now, I’ll be home in a week, this is the longest we’ve been apart.

Looking at Carmit its clear her body has muscle memory and that post baby her body must’ve irritatingly snapped straight back into dancing goddess mode. She point blank denies that ‘’I only recently came back into my body after having my baby, aside from my physical form I still have out of wack hormones, I’ve always been an active and physical person but I had a 24 hour labour and emergency C section. Now I’m still healing and nursing and am very stringent with the choices I make with my food’’.
So she’s not a typical post baby Hollywood nip and tuck mum then? ‘’I did yoga for ages but my weight wasn’t dropping, it was so frustrating, and it was only after a year the weight started going. I did an active regime, with advice from Brian (Freidman), he got me onto Herbalife shakes and a healthy dinner routine. Now I’m back in a healthy zone and conscious about the stuff I put in my body. I look at my blood type to see which foods agree with me. Now I’m older and as a woman I feel the importance of the balance between mind and body. Power yoga is prominent in my life now’’.

I recall my numerous interviews with PCD in the nineties when they first came out recalling that Carmit was the very reason that powerful Jimmy Iovine at Interscope Records even spotted and signed the band. When the group was still doing their burlesque thing in nightclubs, Carmit knew No Doubt band lead Gwen Stefani, who had come to see the PCD girls perform. Gwen bought Jimmy along and the rest was history. Carmit recalls ‘’The way things fall into place there’s never rivalry, I was happy to link the group to Interscope, I met Jimmy through Gwen, Jimmy said what do you do?, I said ‘I’m a Pussycat Doll, he said ‘’what the f*** is that? Next thing, he came to see us with Gwen’’. So without Carmit, music and motoring power couple Nicole and Lewis, may never have been!

Carmit left the group in 2008. Reading between the lines its clear there were fallouts amongst band members. But I didn’t need to scrabble much for information, Carmit was pretty honest about the way history played out ’’We were all fortunate, I choose to remember the amazing times of performing onstage.Its unfortunate that girl groups have this stigma of bitchy rivalry. Unfortunately we fell victim to the same stereotype, but we will always share these amazing experiences. Now everyone’’s spread their wings.I’m happy that Ashley is doing so well here in the UK. In ‘’I’m a celebrity-get me out of here’’ she really surprised me, in the days of the band we used to scream if there was a spider in the vicinity-I cant believe she managed to do so much, I’m so proud of her!’’.

Dancing is a dream job for so many young people- but what are the realities of the job long term? ‘’Its fantastic that dance has been given so much exposure recently; it’s a new era. However when that happens you get a saturated market and now a lot dancers want to do it to be on TV, not to be able to dance. But look at the world now. With dance anything is possible! Dancers get to set trends these days, the market’s changed. If you dance, do it cos u love it. If the commercial world isn’t right for you, just participate in dance classes. Come and join us this weekend. We’re all super excited as this is our first UK tour and we cant wait to dance with you all!’’.