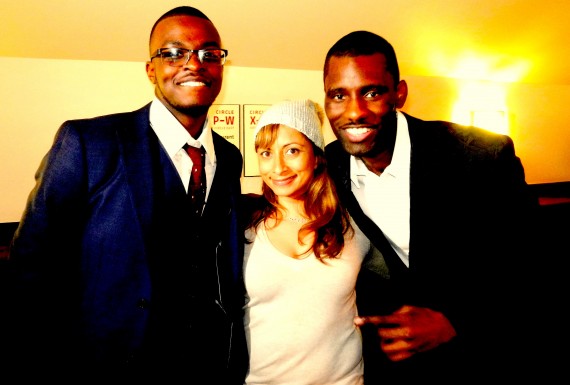 JASMINE WITH A JUBILANT GEORGE THE POET AND A PROUD WRETCH32 AT THE ROYAL ALBERT HALL!
Last week I had the honour of witnessing something refreshingly new, unique and positive in the UK music industry.
I get invited to showcases that are promoting new acts all the time. Much of the time it’s a struggle to even reply to every invitation so similar are all the artists’ looks and sounds. People see Beyonce and Jay Z and try to emulate them. We don’t need a cheap version of a great act that we already have.
This is why anything that’s sent with a personalised invitation and great manners that intrigues is a winner. I wasn’t the only one that thought so as on my arrival at the Royal Albert Hall’s very private rooftop live music room-the Elgar room- was heaving with every table full of playlist heads, A&R teams, print press journalists, bloggers, radio heads and more. The buzz was quiet but strong.
It helped that the invitation had promised ‘’ Wretch and Zeon have asked to extend a personal invitation for you to join us for the George The Poet’s headline show in the Elgar Room at the Royal Albert Hall, January 14th 2013.George sold out the event in less than 24 hours and with that we anticipate this being an amazing night. Also to add to this special evening Jacob Banks will be the supporting act. It would be amazing if you are able to make it down to be a part of a landmark moment for the young man.’’

They weren’t lying. It was certainly a landmark moment. The grand venue is special. It can’t just house any old random newcomer. You need to be as dynamic as your surroundings. Everyone was on time, seated, drinks on table and there was a great vibe of anticipation in the room. The room is a large square with a wide stage, which comfortable houses a complete live band and a patent blood red grand piano. This means every audience member has a great view of the act. Around the room are huge arty black and white prints of classic acts like James Brown and Little Richard. It’s a nicer version of Camden’s Jazz Café.

1Xtra DJ Vis introduced the night and brought on opening act Jacob banks who started with a cover of the all time classic ‘Let’s get it on’. Even though it’s hard to judge talent when they perform cover songs-he owned it in his own very relaxed style.
Jacob looked like a classic model dressed all in black everything trousers, shirt, coat and acoustic guitar. He performed 3 more songs for an enraptured audience; “Simone”, “Coward” and “Something beautiful”. Jacob has strong wispy yet soft vocals. Very reminiscent of lighthouse family lead singer Tunde Baiyewu / and soul singer Lyndon David hall RIP. He sang his whole set with his eyes closed. Shy or caught up in the moment? No one cared. He was hypnotic.
Jacob won the Adidas competition to work with Plan B back in 2011 as part of their ‘ALL IN’ campaign and I could see from the sports brands table that they were very proud and delighted seeing Jacob on stage and appreciating that he is in the great hands of manager Zeon Richards under the Renowned Collective. Adidas might be a humungous global brand but don’t sleep on the breaks they’ve given new, disadvantaged up and coming talent in the UK over the past few years, in the worlds of sport, music, comedy and more.

After a very brief break for a drink, Vis introduced North London’s finest Wretch32 who is from the same music stable as Jacob and George (XYZee Ltd/ Renowned Collective) . Wretch bounded onto stage wearing a sharp black suit and welcomed us as he explained why George the poet had his total support ‘’ when I saw George perform I was immediately a fan of his work’’. Later George and Wretch’s manager Zeon told me that he literally had to hunt George down after seeing him perform. Apparently he asked him to call him numerous times but never heard back from George. Zeon finally got through to George via Georges girlfriend. Perhaps its cos George is in his final year of his politics degree…at Cambridge and therefore otherwise distracted!

When George finally took to the stage he was immediately engaging dressed to resemble a young Malcolm X wearing thick-rimmed black specs, a black suit, white shirt and maroon tie.
The show started with a solo George introducing a young, male, black character called ‘’Malik’’ whose story he would tell us throughout his set.
His set began in total silence, and then eventually a lone violin, then a piano, then a guitar, then his opening act Jacob helped him sing hooks and finally a small choir of singers scattered throughout the audience. George would build his narrative up into a crescendo where the audience were literally hanging off his every word and then bring us to a climax with a clever line or observation (“A man either kills or destroys- don’t be Scarface-he kills his boys”) and we would applaud or cheer.
You would think after every part of the story the set was over such was the audience applause, but then George would gently start to speak again and the lighting would change colour for each act and we would be back on his journey with him again.
Make no mistake; this was no ordinary spoken word poetry show at all. Onstage behind George were 6 huge video set lights and a bank of video shoot strip lights. They looked dramatic. Like a hip hop video visual. It was clever juxtaposing simple word with modern day visuals.
The performance was of a real ghetto story of struggle and strife and family breakdowns in a poem called “Malik”. A story that millions of young disadvantaged men of colour across the globe can relate to. It’s your fathers, brothers, son’s story. It’s clever.
A true theatrical spoken word experience that kept us engaged, it felt like a new artistic modern genre.
I could see it as a regular theatre tour across the country, but also as a 1 hour TV special on Channel 4 or MTV.
A friend that was my plus one who hadn’t originally wanted to come as ‘’spoken word isn’t really my thing’’, was visibly moved and impressed and couldn’t stop gushing about how inspired she was. George will have this effect on you all. I guarantee it.

One Reply to “JASMINE’S JUICE FEATURING GEORGE THE POET AT THE ROYAL ALBERT HALL!”