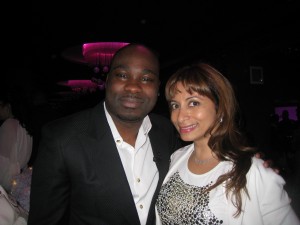 I know we laugh at celebs who we say would go to the opening of an envelope well this week I pipped that. I went to the opening of a shed. The ‘shed’ in question was a café called THE SHED opened up by my mate (one time nemesis), spice sister Danielle Brown- actress and sister of Mel B and one weeknight the café was officially opened with a bang!

THE SHED is in Fulham Road so a very nice area with a football club just up the road so footballers and wags should be frequenting regularly.

We arrived to find paparazzi outside and wondered who they might be after. Once inside it was clear they were after tabloid celebs Peter Andre and his girl friend Elen Rivas. Reality TV and real life car crash Kerry Katona arrived with her DANCING ON ICE partner Dan Whiston, and the only way is Essex slacker Amy Childs who people were eager to get snapped with Peter Andre cos apparently she looks like Jordan. She doesn’t.

Peter Andre and Kerry Katona laughed a lot all night. Kerry wore a leopard print cat suit which wasn’t very flattering on her figure but her hair did look classy in its chopped short wedge style. Other guests included self-professed model Nicola McLean and her footballer husband Tom Williams, Chico, Zilli the chef, André from former boy band Damage and his wife Wendy.

Looking at the blackboard price list full of cakes, cupcakes and toasted bagels, I was impressed to note a sit-in cappuccino is only a reasonable £1.85 unlike the usual £3 quid stings I have to pay for at Starbucks and its peers. Free Wi-Fi and a child friendly atmosphere made me wish I had kids and lived in Fulham just to frequent the Shed.

The intimate venue was packed, decorated with neon green ceiling lights, loads of Babika Vodka was served, as well as espresso martini’s and strawberry cocktails, the DJ was playing old skool rare grooves and soulful house, there was a massive cake (red green and gold), in ‘’The Shed’’ colours, with an edible Danielle on top.

The night finished around midnight with extremely strong coffees so no one had sore heads the next morning.

A lot was made in the press the next day about the act that sister Mel B wasn’t there. Big deal. She lives in LA, is pregnant and apparently relations between Mel and the rest of the brown family based in the UK have been strained for a while now. So no one really expected or needed her to turn up frankly.

Danielle had called all her close friends and family and a great evening was had by all.  OK Magazine actually did a full feature on it showing that maybe envelope openings could actually be the next big thing LOL!

Speaking of OK! Magazine, the world’s biggest celebrity lifestyle is set to launch in Nigeria this year.  The magazine, which will be published in Nigeria and printed in the United Kingdom, will be distributed on newsstands in Nigeria and readers throughout the world can subscribe to the magazine.

OK! Magazine Nigeria will be owned and operated by famed serial entrepreneur Alexander Amosu. (The same guy I met around 2 decades ago at Earls Court Exhibition Centre who told me he was making a company selling R&B ring tones) he’s come a long way!

Alexander told me : “Nigeria’s probably one of the most vibrant, affluent countries in Africa, a nation with this juxtaposition of poverty and immense wealth; a style leader for Africa that continues to shine despite hardships and negativity that try to mar its progress.  I’m honoured to bring OK! Magazine to Nigeria and I am convinced that the publication will enjoy great success.”
He told me about the endless opportunities for OK! Magazine Nigeria which will enjoy sharing news of the world’s fast growing entertainment industry, from Nollywood stars, to the plethora of singing talent currently coming out of the country.
He exclaimed: “Worldwide there is love for what comes out of Nigeria; from the movies to the music.  What better way to showcase this positivity and share it with the rest of the world.”  I recall when Alexander signed the deal last September and has been quietly working to launch ok magazine in Nigeria later this year. It launches in June in Lagos for the first time. It’s the very first time OK has launched in an African country. Alexander is the chairman, and the over seerer, and is putting together a reality show from May to June to find the editor of OK Nigeria. There will be a series of TV tasks and the lucky winner will crowned editor of OK Nigeria. The OK brand is in 19 countries around the world but this is its first foray into the African continent.

A man making new in-roads daily-are you inspired? Still happy to sit back and let others have the glory and shine? If this story doesn’t inspire you nothing will!.