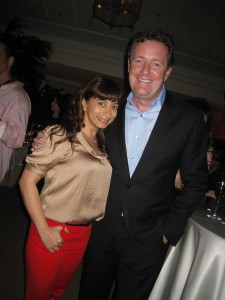 JASMINE WITH HER IDOL PIERS MORGAN AT MARIAH AND NICK’S BABY SHOWER!

There might be a recession underway but that hasn’t stopped our community being as proactive as ever. They say in difficult times there is much opportunity for creativity and that is proven when you look around and see just how many people, brands and teams won’t be stopped. Firstly there’s the whole global Charlie sheen saga that’s had us all rolling in laughter. Only a true winner can talk about tiger blood and bad mouth his bosses and get fired, only to be picked up by LIVE NATION for a multi million dollar branding deal. Honestly-it gets to that stage when you age and you wonder what life’s really about. And once you give up the monotony and struggle, life becomes a lot freer.

This past week showing that cant stop wont stop puffy attitude were the ACLT (African Caribbean Leukaemia Trust) who held a social evening full of entertainment to raise funds for the cause showing that when the ethnic community needs to step up they do. They are now well on their way to achieving their £80,000 they are raising to keep the charity going for the next few months.

A young brother that wont be stopped is Adam Deacon who has followed in the path of people like noel Clarke by writing, appearing in and directing his own film which had its premiere this past week too.

I was lucky enough to be invited to the celebrity facialist Nuz Shugaa’s beauty lounge in London’s Kingley Court where she treated me to her famous red carpet facial. A 2-hour blissful experience. Nuz treats many a celeb, both female and male (it was actually a male celeb friend that recommended her to me!). I’m not a regular facial booker the way I would attend to my feet or hair. Simply because over the years I’ve never really met a beauty therapist that has left me and my skin feeling great. In the past I’ve had clammy cold hands, stinky breath, a hurried service, products that I know I can get myself at home so why pay 10 times extra for the benefit of an impartial stranger doing it? Nuz certainly changed my thinking. Her red carpet facial involved started with a delicate but effective cleanse with organic olive butter, carrot oil, bamboo stem powder and argan oil to lift dead cells after which she adds bespoke pomades to suit each clients needs to exfoliate dull, tired skin. this for me was sugar crystals and pumpkin with pineapple and papaya extract followed by a gentle face peel its like a light acid peel but without the recovery time- the natural enzymes help to brighten the dullest complexion and pigmentation.

After a light extraction marine collagen was used to reduce tiredness around eye contour, then a lip spa scrub and mask is applied followed by a 7 step facial massage with oils and pomades from around the world. This used Omegas 3,6,9, geranium flower, rose oil for brightening collagen and African potato. Then a light masque was applied to infuse the skin (all tailor made), while that was setting I was given a head massage and hand spa by a second therapist. Once the masque was removed my skin was spritzed and toned with serum. Finally moisturizer and sun-block is applied to bring a radiant glow revealed an improved soft, clean radiant younger looking skin.Next I’m booking in to have the Organic Argan Choco body scrub… Divine!!! www.nuzshugaa.com

After all that pampering I was more than ready to trip across the Atlantic to LA for 2 hours- yes really-I was going for a 2 hour function- Mariah Carey’s baby-shower. I spent the last few weeks talking myself down from the trip with the usual logic ‘’its very extravagant for a 2 hour function’’, ‘’you cant really afford to act live a diva swanning constantly across the Atlantic’’, ‘’there are plenty of other festive moments you can share with your mate once the twins arrive’’. Did any of it help keep my ass here? Nope. I only needed the tiniest of persuading and I was on that plane faster than Usain Bolt.

On the Saturday Mariah had a few close girl friends over at her crib where we caught up over plates of her delicious Italian pasta dinner, I tried to feel the twins kicking by holding Mrs C’s belly for a while, we relaxed in the pool and played with the latest additions to the Carey-Cannon household- 2 new female puppies called Jill E. Beans and Sweetie Pie. The significance of the 2 babies that were born merely days earlier was not lost on us all. This is a fertile house!

The following day we made our way up to the uber plush Montage Hotel in Beverly Hills where Mariah’s press and management teams had organised a vision of love LOL! The rooftop overlooking the city had been transformed into a blue and pink themed cosy mirage. Candles everywhere, 2 giant stuffed giraffes and a stuffed zebra, pink and blue cupcakes, balloons, and flowers, a 6 foot long table laden down with gifts from us all and a few from some very famous friends that I spotted, gourmet fast food, cocktails and of course-angel champagne for the guests. Mariah and Nick both had a mix of family members and friends in the place.

I was surprised to see that unlike the baby-showers I’m used to attending ‘’IN ENGLAND’’ (private Cannon joke!), where its just the mum-to-be and her mates lounging around casually in tracksuits playing baby games and opening gifts, this was an all sexes welcome very sophisticated soiree where we all rejoiced in the pending arrival of the 2 new babies and the joy of their excited parents.

Mariah’s tummy is pretty big right now so even though she looked stunning, we insisted she lay back on a plush white chaise lounge (as if she needed convincing!), and her guests took turns in greeting and catching up with her. MC was dressed in a floor length colourful Roberto Cavalli dress with her mermaid like hair cascading down her back. She may be in the most uncomfortable pregnancy months, going through backache and the such but she will always get it together and look her absolute best. Nick wore a 3-piece suit, which reflected the pink and blue theme.

As soon as we arrived American idol star and music impresario Randy Jackson and artist manager Chris Lighty were holding court, its always fabulous to catch up with BET Television head Stephen Hill (he was once an MTV bod like moi). Multi media maven for TV, Radio and internet B Scott was looking ultra fabulous, New York’s not to be messed with publicist Marvet Britto was bubbly and excited. Actress Phylicia Rashard (The Cosy Show) was adorable whilst catching up with us all,but I was most excited to spot in a corner, by himself, looking a little lost- Nick’s work colleague and my idol Piers Morgan!. I love this man! As if it couldn’t be more perfect I am halfway through reading his latest book-I’ve read them all. They’re hilarious! He started as a showbiz columnist like me (at THE SUN) many years ago and graduated to THE MIRROR editor and has always been a wildly fun, opinionated, totally real person that’s taken risks-some that have paid off-others that have seen him fired from his position but like a true winner gets up bigger and better. After his MIRROR humiliation-where he was never proven guilty but used as a scapegoat-he hosted a British talk show and now has gone onto being part of Americas number 1 entertainment show ‘’Americas Got Talent’’ as well as taking over from Larry King with his own chat show. That’s gangsta!. I had someone introduce us. Piers looked as if he couldn’t have been more relieved to talk to someone and was really very lovely and conversational. He notoriously says he loves flattery and trust me he wouldn’t have been disappointed in my chat. I was shamelessly happy to meet a man I’ve admired for years. When I finally thought I should probably be polite and leave him alone it took all my will power not to jump up and down with excitement!

I returned to check on my girl and ensure she was good and hung out with the 2 grandmas’ to be for a while. Both Mariah and Nicks mothers were in attendance looking lovely and graceful, Mariah’s in blue, Nicks in pinky peach.

As the night wore down to a close, the Cannon’s took the mic to thank their guests and make little, cute speeches about impending parenthood, next video and film director Brett Ratner took the mic and made a really funny speech after which we were all handed a goody-bag full of very festive Mariahisms to take home. A great moment to cherish for life. Now those twins just need to hurry and arrive when they’re ready cos auntie Jasmine has a list of things to teach them- including the thesis of rainbows, butterflies and swimming in the ocean as well as the fact that I will be reading stories to them all night long! Their English accent is gonna be pipper than their mom’s!