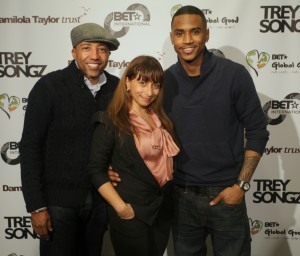 So I’ve just spent the weekend in LA for Mariah’s baby shower. I actually flew across the Atlantic for the grand total of 2 hours. Air miles are a godsend. But airport taxes and fee’s are ridiculous! More on that lovely experience next time!

Just before I flew out there were numerous functions happening across London city. First up mister grown and lyrically gifted, Lupe Fiasco was in town to tell us all about his new album. A small group of journalists, DJ, bloggers and fans were invited to hear the new music and meet him. He talked about the new material as we sipped cocktails and it sounded like his current fan base might be joined by a whole new set of fans if the new material is anything to go by.

I need some laughs in my laugh during this grey, wet March so am setting my TV to ensure I don’t miss any of the American DANCING ON ICE show where this season celebs Wendy Williams, Lil Romeo and Kendra are competing for votes. I can just see the TV gold getting higher than high ratings.

One thing that the current doom and gloom around society seems to have birthed is a need to give back to the community. The weather mostly sucks, taxes have gone up, and we’re paying through the nose for everything. You can’t sneeze without a tax being charged so we’re all tightening our belts. Cars are being down graded, suddenly shopping at Waitrose is no longer an option, baked potatoes and pasta are appearing more and more at dinner tables as we try and save precious pennies and luxury goods are being discarded in preference for long term collateral like property. Desperation and frustration often lead to young people behaving badly and other youth are keen to show a good positive role model.

Last week whilst in town for his music tour Usher extended some pro-social love by visiting LONDON’S BRUNSWICK CLUB as he brought his NEW LOOK FOUNDATION to London to host a workshop. Usher was attending to talk to young teenagers to teach them to use their creative Talents to Become Leaders In Their Communities. The day saw usher over seeing team-building, speakers and classroom break-out sessions where students learn how to tackle community problems, the basic skill-set of becoming leaders and how to create a service project in their community.

A few days later current heart throb music star Trey Songz got together with music channel BET, the Damilola Taylor Trust and Mayor Boris Johnson to hold an evening at Boris’ offices at City Hall. It was an inspirational evening of youth engagement where young people from the Damilola Taylor group performed short pieces of song and spoken word as Trey Songz watched alongside his record label boss Kevin Liles. Former MTV BASE and CHOICEFM host Kat hosted the evening in his incomparable style and had us all laughing at his antics. To start Boris welcomed us all and admitted he had no clue who Trey Songz was until minutes earlier but that he was happy to extend his hospitality at City Hall and thanked everyone for attending. Next BET head honcho Michael Armstrong said a few words about the importance of the evening and bringing the entertainment side and youth together in real life before trey stood up. A few young people performed- a 15-year-old girl who sang an Ella Fitzgerald track particularly stood out and had us all mesmerized. As soon as Trey had entered the round amphitheater arena the girls in the audience had started buzzing, whispering and giggling with their phones and cameras held up high. When Trey stood up they screamed in high-pitched squeals to our amusement until he requested they calm down. Trey spoke briefly about his background and upbringing and the fact that he came from a single parent family and that his mum had sacrificed so much to put him on the road to education and fame. Thereafter Trey took questions from the young people on the floor where they asked his opinions on negativity in songs and videos and youth effect on world governments. Trey told us that governments now had no choice but to listen to youth after the numerous uprisings across the globe where young people had made their voices heard.

The same night I legged it across London back to West London to the Notting Hill Arts Club where Radio1Xtra were throwing a private soiree for industry heads to come and watch some of their favourite up and coming artists like Yasmin, Aggro, Maverick Sabre, Ed Sheeran, Skepta and Lethal B perform. The night saw 1Xtra DJ’s like Trevor Nelson, Twin B, Semtex, Westwood and others introduce the acts onstage and a good TEAMUK vibe was celebrated by all. Playlist overseer Austin Daboh ensured things ran smoothly with his friendly, warm manner. Post show myself and lethal b found ourselves across the street at KFC. I of course made a palaver about the fact that I wasn’t here to eat it but merely accompanying a friend LOL. 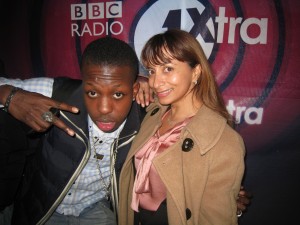 Young people are most definitely making their mark on society; one such young man is 20-year-old Jamal Edwards. I first came to hear of Jamal via a friend at MTV. He was her nephew. She told me he wanted some advice and work experience about his media project. A few months later I kept hearing a buzz about a blog called SBTV, which showcased young British signed and unsigned rappers and singers. It focused on getting artists to make a freestyle of 64 bars for his website, in turn generating numerous hits online. Jamal told me it began when he received a camera for Christmas at 15 years old and started filming around his West London estate, then he went to a D12 gig by hassling their manager and asking for a quick interview with the group. thereafter he started his online site -SBTV a year ago because ‘’ There wasn’t any online platforms that showed people spitting so I just filled a gap . The freestyle bars (F64’s) came about cos all MC’s were recycling bars. Also I wasn’t able to get DVDs cos I was young so I provided it for free to my peers online and small acts started the buzz before bigger acts wanted to be a part of it too’’. SBTV hasn’t had Jamal’s full attention in recent weeks but he revealed that it’s re-launching on April 8th.

This fortnight, proving that the world is ever changing and corporations are looking at new ways of doing things, Jamal signed a sub print deal with SONY for his ‘’little media project’’ making him the youngest media mogul that I’ve ever heard of.  Called ‘’Just Jam Records’’. Jamal is now able to sign acts and is actively looking for them now. He told me ’’after I made my friend Ed Sheeran’s video things started really happening for me –Ed’s recently been signed to Atlantic- and this also brought me to Sony Music’s attention. I’ve filmed quite a lot of up and coming people’’. Jamal revealed how he grabbed P Diddy and Nicki Minaj on the same day here last month. Diddy was sick and was canceling press but innovative Jamal and his team caught Diddy on his way out. He excitedly added ‘’It was the same with Nicki which was mad as I went up to her and asked if I could follow her around. Its all new and exciting to me right now that I can actually help sign and build a platform for new artists’’. You go-young media mogul!