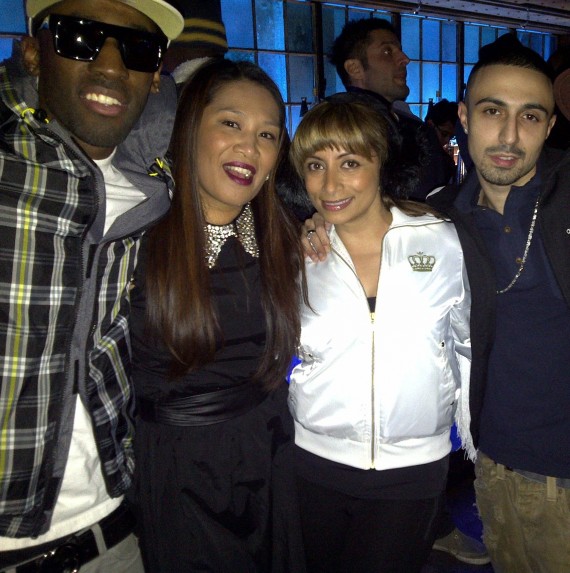 JASMINE WITH BASHY, ADIDAS HEAD CELEB HONCHO PAOLA LUCKTUNG AND ADAM DEACON!
Happy New Year readers! And yes! Whilst many of us are complaining about our lot in life there are many that didn’t wake to see 2012 start so lets be thankful for our lot in life. It surely could be worse! And once upon a time it was!
If you’re under 30 you wont remember how it used to be. But the UK urban entertainment scene wasn’t always this unified and connected. We’ve comer a long way. Back in the day I recall rival music awards hating and sabotaging each other, UK radio DJ’s and play-listers refusing to play British urban acts, film companies not taking UK urban actors or film makers seriously and artists themselves seeing themselves as an island not to be mixing with each other.
To use a cliché, ‘back in the day’ acts would ridicule each other, record label exec’s would snigger at the concept of British youth making it in our charts and this countries youth had pretty much accepted that their worlds were going to be musically reflected by American urban music.
Just this Christmas season gone I realised that we as a community have progressed in certain areas in leaps and bounds.
One blisteringly cold Sunday night just before Christmas whilst juggling emotional visits to my hospitalised dad and writing Christmas cards on my sofa I thought I’d try and balance my life out with a bit of fabulosity and so popped to the Adidas Christmas party at UNDER THE BRIDGE in Fulham where all the sports brands most valued celebrity clients were in attendance. Earlier that day a huge basketball event called Adislam had taken place in Brentwood, Essex (it seems like these days the only way is Essex!), and a host of celebs and music stars that had taken part were having a well deserved party drink to finish their day. The invitation said ‘’festive’’ so not having planning any outfit I threw on my favourite white satin Adidas tracky top with long fringing on the arms and matched it with black jodhpurs and black knee length fringed boots and to top it off plonked a huge fluffy pair of black ear muffs on my pony tailed head. (This is me on an understated night! LOL).
The party was a lovely evening as the stage was in full festiveness with a silver Christmas tree and the legendary giant Adidas shoe DJ booth and in the house were….deep breath before I kick off-this list is long…Wretch32 (who’s neck was aching him after nodding his head too much onstage whilst performing but he was still the charming handsome young man that he always has been pre-fame), Bashy (who looked festive as if he’d really made the effort to look fly-good ole bish bash bosh!), So Solids Megaman (who I don’t see out often but when I do the party is around him with him jumping up and down hard all night especially to the old skool jungle beats!), Chipmunk (who had an extra busy night as he joined Sneakbo onstage at the 02 arena earlier in the night) , G Fresh, Baby Blue (who looked as cute as ever-I must see her perform soon!) , Adam Deacon (who always acts in the humblest manner and seems embarrassed by the attention by his fans-but I know he loves it really!) , Scorcher (the ladies heart throb LOL!) , designer Wale Adeyemi (who always joins me in our dance routine to Jay and Kanye’s n****** in Paris), DJ Dodge who had flown back home from his L.A pad to see how the UK does!), industry head Ugo, MC Ty (who I had to convince/drag into the festive photo booth for silly pics!), DJ Swerve (who was still ecstatic and loved up with his newly born baby girl), girl group Rogue and their manager JP, one half of 1Xtra’s radio duo Vis, vocalist and soon to be star Josh Kumra, , former 1Xtra playlist head/now The Hub entertainment CEO Austin Daboh with his clients the ever vivacious blonde Mac Twins, hip hops photographer to the stars Paul H, and of course DJ Manny Norte who had everyone running to the dance floor with his as ever hyper than hype set! I looked around and thought’ there’s something missing?’’. Then it became clear ,there were no groupies in the room-impressive-cos it would’ve been groupie heaven!)
MUSIC mystro Richie P had brought along a very dangerous rum cake which we all devoured and forced Ashley Walters and Megaman to get stuck into too! 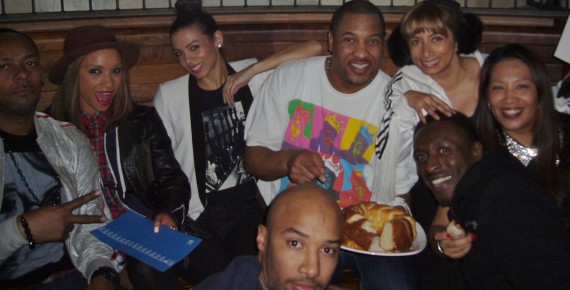 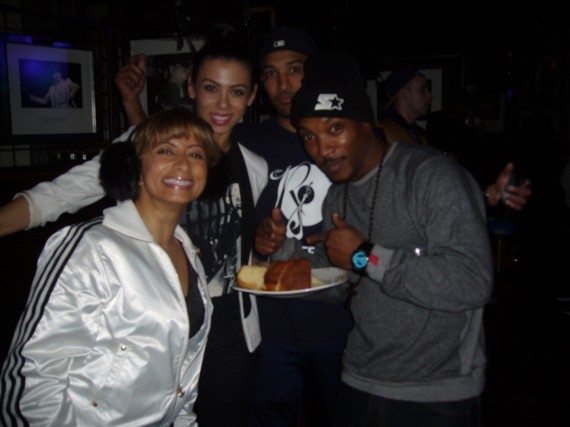 JASMINE AND ASHLEY WALTERS GET MERRY ON THE RUM CAKE!
The Adidas head honcho celeb ladies Paola, Aisha and Akua were skanking hard on the dance floor and as I looked around the room I couldn’t help think what a great sense of positivity and unity there was in the room between everyone. If we can bottle this and gift it to all 2012 then there’s no holding us back! #TEAMUK are destined to be even bigger this year! Lets go!