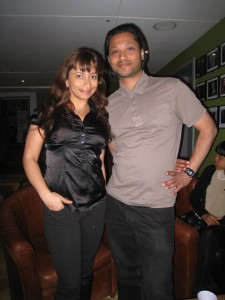 This week’s been like a Craig David 7 day story for me.
Monday I went to a private film screening of ”Everywhere & Nowhere”. Tuesday it was the IVY MEMBERS COMMITTEE dinner at tres sophisticated Mayfair restaurant Scotts, Wednesday I started at the Cuckoo Club to see Loiekk Essiens showcase before legging it across Leicester Square to watch Jennifer Hudson perform at the Ivy Club, Thursday it was dinner with my parents, Friday another dinner party chez Dotiwala. Saturday MOBO CEO Kanya King took me rowing along the serpentine-and yes-she rowed! Sunday was all about chilling out.
”’Everywhere & Nowhere” kicked off the week correctly- its in cinemas across the UK from May 6th. A new British youth culture film, it would be easy to lazily call it an Asian Kidulthood /Adulthood but its much more than that. It does,its true, focus on a group of young Asian boys and their British experiences of feeling like they’re from ”everywhere and nowhere” and the trials of friendship, family and career within the Indian culture. It’s both real and gritty and unashamedly raw without the usual comedy element that many Indian actors and scriptwriters insist on including to entertain our native English audience.
The lead character –Ash, played by a very intense, gripping actor James Floyd– is a man torn between two worlds, that of his family and friends and the other, of his dreams. This is a  drama centered on a British Asian torn between honoring his family traditions and his love for Djing. Its his story set across London with it’s fast paced nightlife and run ins with the law all caught on camera from the Director of Kidulthood Minaj Huda. My parents are from Kenya and India so I could relate to many of the issues set out in the movie. I felt sad for the old,ignorant beliefs that were highlighted within the film that the older generation of Asians carry. It felt good to observe that we all share the same issues but made me realise how sad the olde worlde with its ignorant values was. If only we could take the best from the old and modern worlds for harmonious unity. Everywhere & Nowhere has a gripping storyline and fun moments and is a beautiful, emotional, touching look at young British Asians. Director Minaj has done a great job with his first big outing and like Noel Clarke before him will no doubt set a fast pace in his own lane in the near future.
Aside from James Floyd, boy band Blue member Simon Webbe plays a DJ that dates Ash’s sister and their story focuses on the issues of a black man dating an Asian woman. A true dynamo onscreen is Adam Deacon.

Adam has made his mark recently with his movie ”Anuvahood” which had young brits laughing all the way to the bank of Deacon. Adam has an onscreen energy that is mesmerizing and whilst he’s usually cast in a number of BBC and mainstream TV shows as the hype road-man , he is capable of playing much more. In ”Everywhere & Nowhere” Adam shines as Ash’s Bangladeshi mate but shows a real variation in his character. Its clear that in the next few months Adam is going to blow up in the same way as his peers Aml Ameen and Idris Elba (now both in Hollywood). He’s busy having just had a UK hit movie out,is starring in 2 films this year and writing more comedy. As well as ”E&N” , Adam is starring in ”Weighed in”-with legend Bob Hoskins where he plays a cockney, eighties print worker with no street slang in his character.

Adams had a busy life.Brought up in Hackney he reveals he didn’t have the best childhood. He was in a hostel at 16 before being given the opportunity to attend The Anna Scher school – a community-based theatre school in Islington.He admits he was  the class joker that didn’t always do his school work but he did connect with drama and music. The great thing about that school was it was open to everyone reminisces adam. He had his name on the 2 year waiting list and when he went to look around the school saw photos on the walls of who had been there which really inspired him.
His teacher ,Miss solomon from Stoke Newington School told him about the summer school waiting list which cost 80 quid so Adam did loads of odd jobs to raise 80 pounds as a 12 year old and went!. He recalls casting directors from soaps like Eastenders watching the classes but they were there so often they got used to them and just carried on. He recalls his first film was called “Face”. He had one line in it which was eventually cut out. So he learns a valuable lesson early on. He continued his auditions and secured so many small jobs. He wants to shout out Anna Scher as ”she had the rowdiest kids and put them on, now Anna’s not a part of the school any longer the real talents gone too. She’s teaching from a church now. I cant believe I invited her to my ”Anuvahood premier and she came! I wouldn’t be here today without her”.

Adam has that incongruous look about him that has him looking anything from Asian , Middle Eastern,European, African-in fact he could be from anywhere. But he tells me he’s half Egyptian and half white English.  At ages12-13 he did Eastenders/ The Bill/ Spooks/ Goodness Gracious Me/ London’s Burning and more, but says that actor and director Noel Clarke putting him in Kidulthood was his first big break as was his part in the Ali G movie. About Kidulthood Adam gushes ‘”it was the realest script I’ve seen, I met Noel, we did some improvisation, I stood out. I had the slang and realism. I got called back to act with Noel. Noel told me i had the part. That’s where i met Aml, Femi and other actors. Now we’re a strong team of British brothers that are in my world. This is the beginning of something big!”.
A few years after acting in Kidulthood Adam wrote his own film titled ”Anuvahood” which he says taught him a lot about the industry about politics and the business. He was disappointed in that side . ”We were told if you work,train and act you get paid. Now I realise the talent and acting is only 5 percent of the whole job, the business is a major part too”..
You may have also seen Adam in ”Shank” directed by Mo Ali. Adam reveals that apart from himself and music star Bashy none of the other cast were from that underground world. So altogether they edited the dialogue alongside Mo but didn’t receive any extra credit or extra income for this so he thought ”I’m going to do my own thing”.
With Anuvahood he says he wrote a film that he thought British kids wanted. ”The culture has stereotypes that you can laugh at. I had some hectic organization to get through. With the music side all the music acts on the soundtrack supported it. Dizzee gave is music for much less than it would’ve been worth. There was a whole, exciting, unified teamuk feel to the project.
Adam is clearly taking his own DIY route as he’s not getting the breaks he wants or deserves. He concludes that he wants to do a few comedy films and a would love to make a documentary on grime godfather Wiley. ”Wiley is someone I’ve admired for years. Seeing him and his career showed me how to manage and reinvent my career even without mainstream support. Its shown me its ok to be the underdog”.
Adam laughs as he see’s that with Anuvahood now mainstream media have been proven so wrong. ” The scene is big enuff for the mainstream to understand it. I naively assumed that reviewers would do their research. Anuvahood is a spoof and parody of the world. A reviewer for film site IMBD wrote that whilst she was too old to understand my movie- she wrote that she didn’t have to get it as her son got it and loved it. My biggest problem was critics dismissing a whole section of community.  Some said that I shouldn’t ever be allowed to direct again as it was apparently homophobic and racist. Theres nothing in there that isn’t in Little Britain!”.My film was Number 1 in London-i’m proud!”. And with that Adam completes his rant , bids me farewell and tells me he’ll see me again-in the big time! Love that confidence!