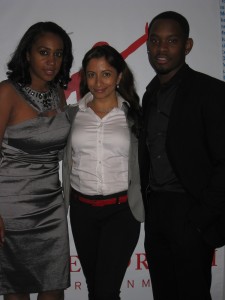 So London’s in full swing for fabulosity this month. This week alone has seen me swapping heels and kisses at numerous events. First musician Loick Essien invited me to his showcase tat the cuckoo club where he performed for an industry crowd.  Straight after he finished it was a sprint across Leicester square to the uber cool IVY PRIVATE MEMBERS CLUB where American songstress with stronger than strong pipes-Jennifer Hudson put on a private performance in the rooftop VIP lounge just for the club members. The next day I had a good old media family reunion with my old MTV News team where we reminisced about the good ole days as you do. I also managed to fit in time to cook for 2 dinner parties round at our place. I rate my life by the number of dinner parties I have. If I’m in dinner party mode it’s a barometer of positive happiness in my mental frame. Until someone spills red wine on my carpet or gets drunk and attempts to vomit on said carpet. Then the Dotiwala dragon emerges quicker than Usain Bolt on a pattie dash when he’s peckish.

One thing that does leave me proud to be a Londoner is the pure ambition and guerilla soldier attitude that new talent is coming with. The work of MEDIATRUST and their numerous projects that help young people across the nation has caught my attention this week. MEDIA TRUST’S corporate members include BBC, ITV, CHANNEL 4, SKY and more. As well as supporting numerous media projectswhere people are empowered to make their voices heard via media; they actively recruit, teach and champion new, young talent from marginalized and diversecommunities across the country. As well as currently looking for new peoplefrom 18-25 to join their new LONDON NEWS REPORTING team, this week they re-launched for the second year their huge COLUMN IDOL 2011 competition in conjunction with THE SUN newspaper to find undiscovered raw talent aged 18-25. Column Idol see’s young people who enjoy writing and want to have a chance to see their work printed in THE SUN explain what they would like to write about and why they deserve the chance to have their work printed. They will be mentored by some of newspaper’s top journalists. Six entrants will be shortlisted and judged by a panel including Editor Dominic Mohan. The winner will receive the prize of having their column printed. The hunt is being supported by songwriter Jessie J and and England and Arsenal star Theo Walcott, who has written a popular series of children’s books.
JESSIE J’s distinctive style and evocative lyrics have helped her become an almostovernight chart star. Jessie, 22, told us it’s a great opportunity foraspiring young writers. She said: “This is a fantastic chance for anyone who likes writing and has an opinion.” “Young people are always saying that they want to be heard, and this is an opportunity for them to step up and do it! You don’t have to be academic to write passionately about something. You can’t be a writer and feel like you have to follow a script – Column Idol is all about doing it YOUR WAY, which is what makes this competition so special.”  Entering a competition in the country’s biggest newspaper is a daunting prospect, but Jessie urges you not to be put off. I would say to young people reading this – take opportunities when they come, because life doesn’t hand it out. When I was younger, I never entered anything to win. I entered to learn. I would audition for things knowing that, even if I didn’t get it, the people there would remember me in future for a better-suited part’’. So Voice readers- get entering and when you’re up there running things in the print press world remember I put you on!

Someone else who embodies all I’m excited about this week is British/Hollywood actor Aml Ameen and actress Kamara Bacchus. Aml will be a familiar face to most of you. He was a long-term copper on THE BILL, played lead parts in films like Kidulthood and more andlast year was snapped up by Hollywood producers to star in new drama HARRYSLAW. He moved to L.A but proving his passion for the UK, he continued his drama academy ASA- Actors Studio Alliance, -for young,marginalized youth in Camden. This week Aml had a screening at BAFTA where hundreds of people were treated to a screening of his 3 short films. To start the night Aml was introduced onstage by his class tutor and mentor who spoke about Aml as a passionate young manwith a dream. Hence Aml’s production company is called AmeenDreamEnt. Aml explained ‘’ everyone that knows me knows I’m a big dreamer. I go through stuff and I get disappointed but I keep going for it and I try things all the time and dreams can come true’’.
Aml explained that we would be viewing 3 short films, a music video by his brother-musician Mike Ameen , and a set of hilarious outtakes.
The first film THE PICK UP was made after a student-badgered Aml to look at his script and finally convinced Aml to make it. It’s about 2 guys (Aml and actor Najan Ward) trying to pick up two girls in a club. It’s a hilarious and well-shot story about their scam and its ultimate consequence. The second film SPECIAL DELIVERY was written and starred in by actress Kamara Bacchus and was a beautiful piece of visual film. Like a silent movie it was poetic and innocent about a postal delivery girl and a relationship she strikes up with a resident and the audience raved about it at the end. The final film and the main draw for the night was DRINK, DRUGS & KFC written and directed by Aml. It was a very funny, well written, street drama about a group of boys and their innocent,fun, adolescent good times, trials and tribulations.
Aml explained at the post screening Q&A session that was about ‘‘the brotherhood and young men being in love, hopeful and innocent. He wanted tomake timeless beautiful classic pieces that inspired and entertained’’. He said he was inspired by a lot of good old and modern day films and that he wanted to make stories that were different to the norm about our scene and culture and not just repeat the same stereotypes about ethnicpeople that had become popular recently. He gave props to his friends Adam deacon and Noel Clarke and added that he too was ‘’throwing his dice as a film maker into the pot’’ and that there was room for everyone.
Aml wanted to thank his cast and crew fortolerating him and giving him the opportunity as a first time director and for their unwavering humble attitude throughout,  ‘’my tip for success is If you want to be great surround yourself with world-class people’’.
There followed lots of congratulations from the audience which included actors Cyril Nri (The Bill), Johnny Gill (Harry’s Law), Adam Deacon, Femi Oynerion, Jimmy Ackingbola (Holby City), Gugu Mbatha-Raw, William Gaminara (star of Silent Witness), Arinze Kene (Connor in Eastenders), Chucky Venice and Jason Barret, the night left us all feeling positive, empowered and proud of Aml as a trail blazer and community champion!.