Legendary American comedian Dave Chappelle’s had a rollercoaster of an infamous career journey thus far and continues to push boundaries. 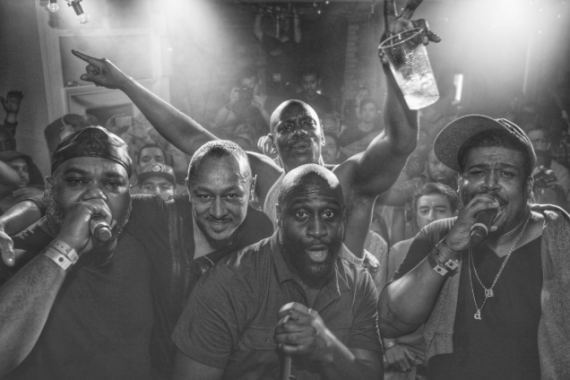 AFTER THE SHOW IT’S THE AFTERPARTY – Dave Chappelle, De La Soul,musician Fred Yonnet and the crowd at Dave’s Juke Joint event in London.

As well as a comedian, Chappelle is a screenwriter, producer, and actor who has been in London this month playing a series of sold out date’s at Hammersmith Apollo.
He ‘likes to engage in marijuana use, but does not drink alcohol’. He even chain smoked all the way through his London shows having acquired a special licence from Hammersmith Council to be allowed to smoke onstage each night! 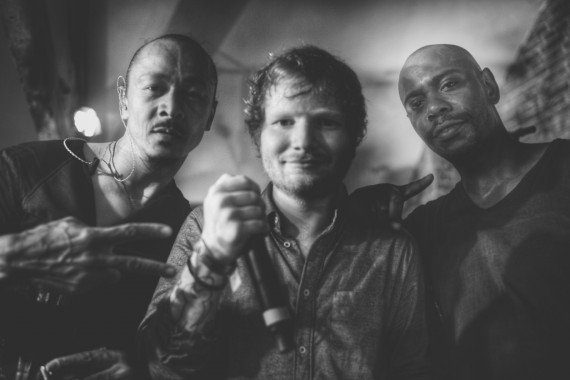 After beginning his film career in the USA film industry in 1993 with small cameo roles, he continued to land minor roles in box office hits including The Nutty Professor Con Air and Blue Streak. His first lead role was in the 1998 comedy film Half Baked. 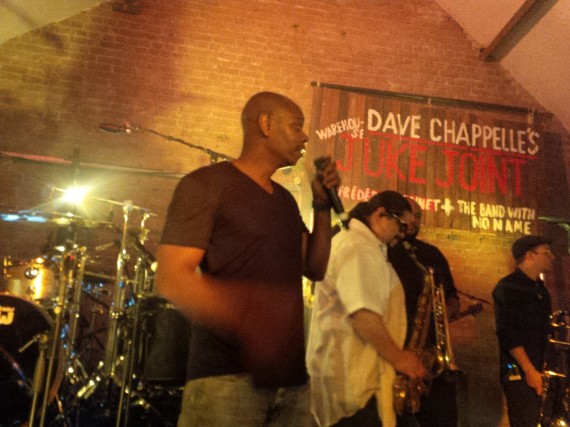 DAVE CHAPPELLE INTRODUCES HIS ‘BAND WITH NO NAME’ AT HIS JUKE JOINT IN LONDON.

Just over a decade ago, Chappelle was also the star and a producer of the Michel Gondry-directed documentary Dave Chappelle’s Block Party, which chronicles him hosting a free concert in Brooklyn on September 18, 2004. 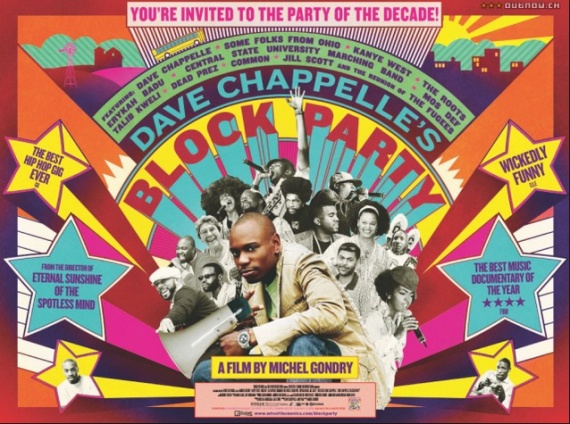 Several musical artists, including Kanye, The Roots, Erykah Badu, Mos Def, Dead Prez, and Jill Scott are featured in the movie both performing in the concert and in conversation off-stage. He even brought Yellow Springs residents to Brooklyn at his own expense. Another surprising highlight of the event was the temporary reunion of popular 1990s hip-hop group The Fugees. Even to this day, people rave about and debate this film on social media.

This outing which merged his world’s of comedy entertainment, throwing parties and music, had such a big impact on him that he started another brand called ‘’Juke Joint’’ which merges live musician’s with a party crowd in a very unique old skool jazz club vibe.
Dave threw the first Juke Joint last April in Ohio, and was convinced he had witnessed the capturing of lightening in a bottle. This weekend he brought this concept to a west-London warehouse.

After his seven night sell out show in the capital, he brought Juke Joint to Loft Studios, in North West London for two nights, where with members of Stevie Wonder’s touring band, and Prince’s band, as well as world renowned harp player Frederic Yonnet and legendary Hip Hop DJ D-Nice, put on a sweaty exuberant party akin to a live musicians jamming session.

Hilariously, one of the first things he did as he took to the stage with the live band was to say ‘’now I’m going to do my favourite white people shit’’, ran and leapt into the crowd and moshed just centimetres from us.
I was in shock, relieved that he hadn’t vaulted into my group of girl friends. Our hair buns, outfits and phones would have gone tits up, with a huge insurance claim for personal injury the next day.

Inspired by the birthplace of modern music, the deep American South’s Juke Joint, the music was a heavy mix of jazz, fusion and sprinkles of R&B. Dave played both dj records and joints by the live band, of his favourite playlist tracks from Coltrane to Nirvana as his ‘’The Band With No Name’’ battled DJ D-Nice into the small hours. 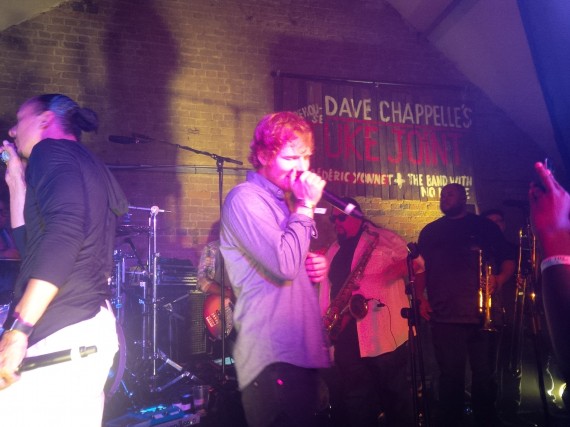 ED SHEERAN JAMS WITH DAVE CHAPPELLES BAND WITH NO NAME IN LONDON.

An hour into the fun, I noticed another mosh pit and spotted little ginger Ed Sheeran in the centre of it, having come straight from his Wembley Stadium show.
Next thing, Ed is pulled onstage by Dave, and Ed proceeds to blow the crowds minds by taking us on a 20-minute journey of karaoke skitting with the live band. 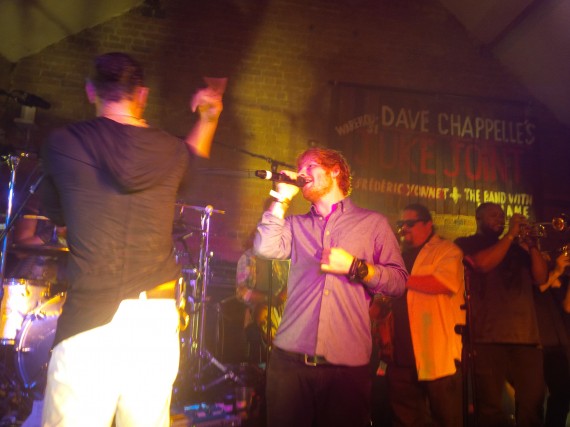 ED SHEERAN JAMS WITH DAVE CHAPPELLE’S ‘BAND WITH NO NAME’ IN LONDON
Ed had the party guests join him on call and response hit song’s from a wide array of act’s from Bob Marley, Snoop Dogg, Pharrell and even our very own Krept and Konan and Tinie Tempah which had the crowd baying in hysteria! I was most impressed by his Caribbean accent and version of many bashment and reggae songs. Its official. Ed is down. 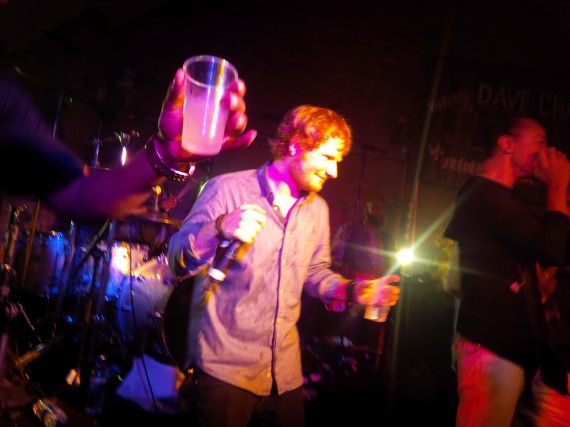 Dave’s night always attracts his peers like Naomi Campbell and Venus Williams who were also in the house.
At one point he asked his DJ D Nice ‘’what’s that British shit that had the crowd at the show lit?’’ …D Nice proceeded to throw down Lethal Bizzles POW and the party jumped harder than before with us all singing and rewinding POW to sing it again, and again, about 16 times in all!
The roof was jumping and the floor was definitely shaking.

The following night saw much of the same but with legends De La Soul take the mic for impromptu sing-offs. What a concept!

The nights were HOT not just socially, but akin to a bikram studio. Clearly Dave is clued up and his ryder includes a big metal fan onstage all night, pointing upwards, to keep him cool. At one point he even picked it up and fanned us. Beyonce take note! 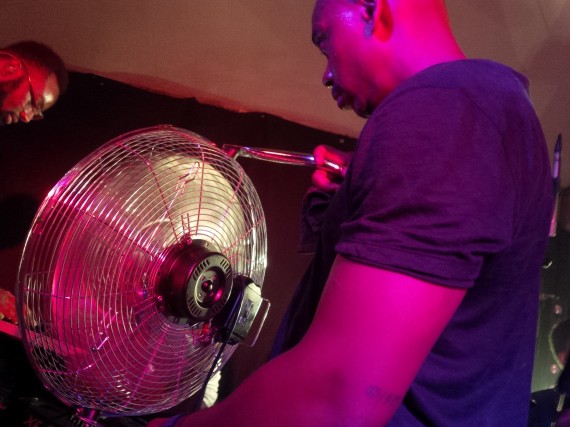 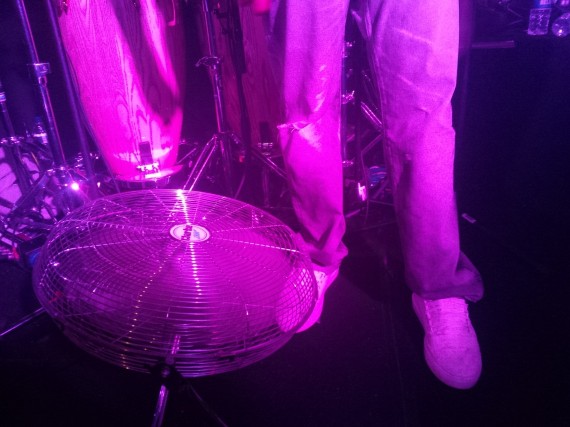 Dave told me later ”In regards to the Juke Joint events:it was the idea of taking it out of the traditional venues and putting it somewhere else where it’s alive and kinetic and not so much a show but a celebration lead by virtuosos.”

I admire Dave for speaking up when all around him would simply shut up and take the cheque.
Showing incredible tenacity, as so many successful multihyphenate behemoth peers do, in his early career he was picked up and dropped numerous times by TV companies but kept working the scene.

In 2003, he became more widely known for his comedy sketch television series, Chappelle’s Show, which ran until his retirement from the show two years later. By 2006, Dave was called “the comic genius of America” by Esquire and, in 2013, “the best” by a Billboard writer. To this day, his show continues to run in popular late-night syndication and on television networks around the world. The show parodies many aspects of American culture, including racial stereotypes, politics and pop culture. Along with comedy skits, the show also featured musical performances by mostly hip-hop and soul music artists. 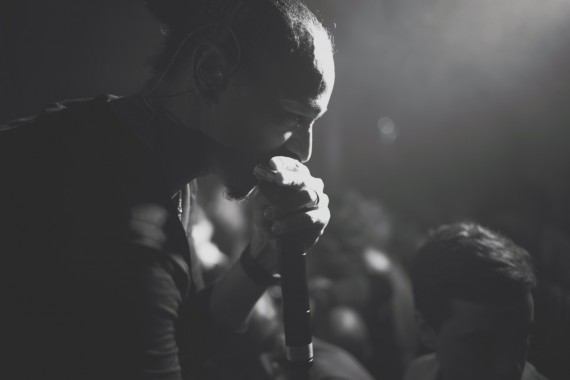 In the midst of all the success, an axe fell, in Dave’s heart. Season 3 was scheduled to air on May 31, 2005, but in that month, Chappelle stunned fans and the entertainment industry when he abruptly left during production of the third season of Chappelle’s Show and took a trip to South Africa.

Chappelle said that he was unhappy with the direction the show had taken. ‘’Coming here, I don’t have the distractions of fame. It quiets the ego down. I’m interested in the kind of person I’ve got to become. I want to be well rounded and the industry is a place of extremes. I want to be well balanced. I’ve got to check my intentions, man’’.

Immediately following Chappelle’s departure, tabloids quickly and repeatedly speculated that drug addiction or a mental health issue, rather than ethical or personal concerns drove Chappelle’s exit. In a later interview with Oprah, he expressed his contempt for the entertainment industry’s tone-deafness toward black entertainers and audiences: ‘’When I see that they put every black man in the movies in a dress at some point in their career, I start connecting the dots’’.

1 – If you’re the smartest person in the room, you’re in the wrong room.
2 – He who is a pin is carrying pain.
3 – You are the average of the 5 people you spend most time with.

Dave encompasses these ideas. Key influencers and gatekeepers surrounded him as a child; his parents were politically active, and notable individuals visited the family house during his youth. In fact, it was American jazz singer Johnny Hartman who predicted he would be a comedian and, around this time, Chappelle’s comic inspiration came from Eddie Murphy and Richard Prior.

Chappelle then moved to NYC to pursue a career as a comedian and gathered the courage to perform at Harlem’s famed Apollo Theatre in front of the infamous “Amateur Night” audience, but he was booed off stage. He described the experience as the moment that gave him the courage to continue his show business aspirations and quickly made a name for himself on the New York comedy circuit, even performing in the city’s parks.

He converted to Islam in 1998 and told Time Magazine in 2005, “I don’t normally talk about my religion publicly because I don’t want people to associate me and my flaws with this beautiful thing. And I believe it is beautiful if you learn it the right way.”

Dave’s clearly a leader, not a follower, speaking up about discrepancies as they happen and unlike many wont just ‘take the cheque and sell out’’ if it doesn’t sit well within his psyche.

Dave – Your fans globally salute you!