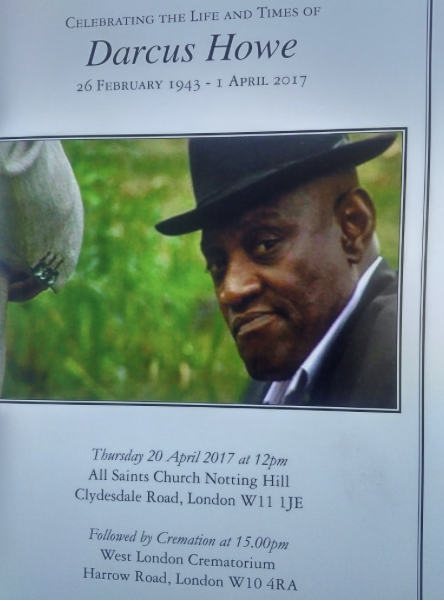 Today a great man was laid to rest.
Darcus Howe was an incredible man. Google him and his work.
Encourage your young ones to read up on how he and his peers laid the path for many of us to be able to do what we do in 2017. 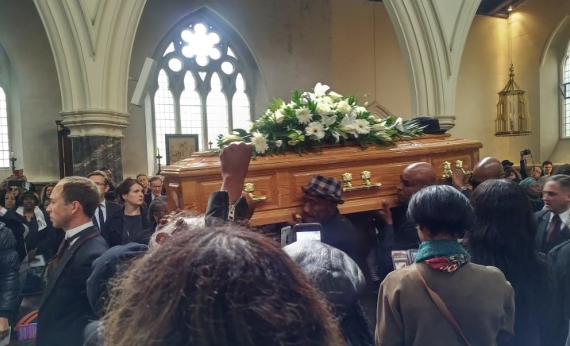 Leighton Rhett Radford “Darcus” Howe was a British broadcaster, writer and civil liberties campaigner from Trinidad, who arrived in England as a teenager intending to study law. Here he joined the British Black Panthers, a group named in sympathy with the eponymous US organisation. He came to public attention in 1970 as one of the “Mangrove Nine”, who marched to the police station in Notting Hill, London, to protest against police raids of the Mangrove restaurant, and again in 1981 when he organised a 20,000-strong “Black People’s Day of Action” in protest at the handling of the investigation into the New Cross Fire, in which 13 black teenagers died. 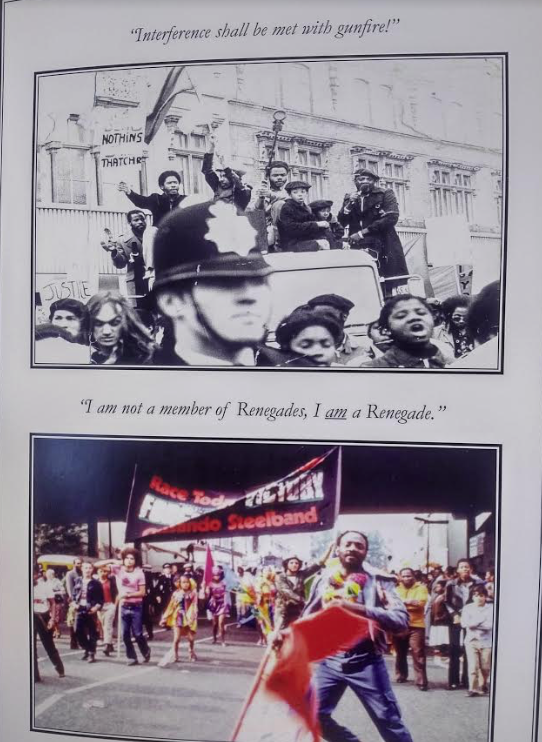 Darcus was an architect of change in Britain for multi cultural irrecoverable change. At his funeral in west London today the church was packed full, with well-wishers spilling out all over the street outside and by the time the service was over the whole of All Saints Rd and nearby Portobello Road was at a stand still with the Mangrove Steel Band leading a guard of honour procession for Darcus’ hearse. 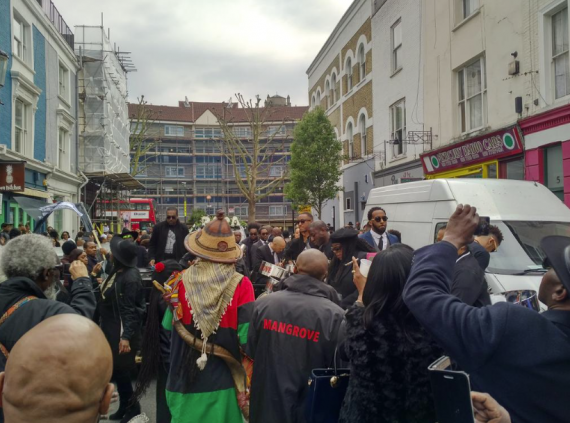 I attended, not just to pay respects to this man who I had grown up hearing about from my dad and his peers who were all friends, not just a man I had watched on TV rustling feathers and being provocative (CLEARLY had an influence on me no?), but a man who inspired and nurtured many including my friend- Darcus Beese – son of Darcus Howe. Darcus Junior is always supportive of any request I make of him and is also the first ever black man to head a record label in the UK and leads with vision, authority and grace bringing up young black people in his own footsteps at his label. How incredible is that for a legacy of father and son! 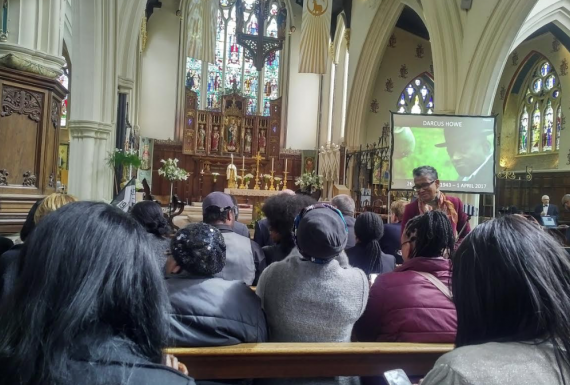 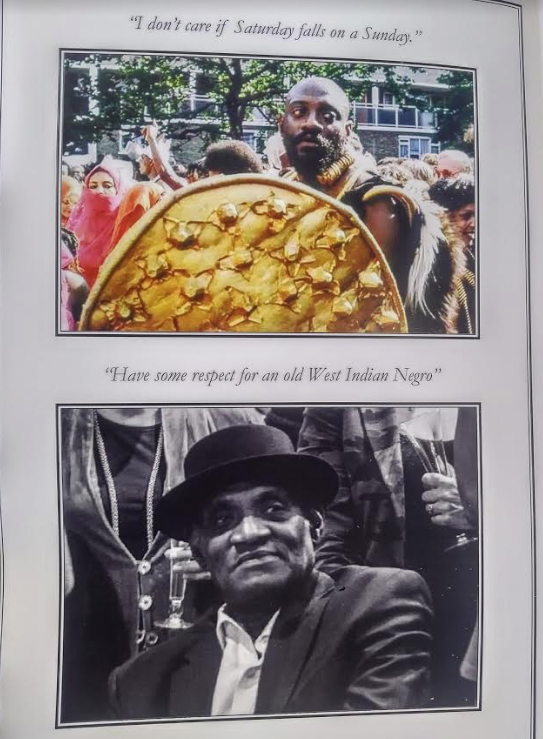 It’s no wonder, Darcus infiltrated many worlds. He was an editor of Race Today, and chairman of the Notting Hill Carnival. He was best known as a television broadcaster in the UK for his Black on Black series on Channel 4, his current affairs programme, Devil’s Advocate, and his work with Tariq Ali on Bandung File. His television work also included White Tribe (2000), a look at modern Britain and its loss of “Englishness”; Slave Nation (2001); Who You Callin’ a Nigger? (2004); and Is This My Country? (2006), a search for his West Indian identity.He wrote columns for the New Statesman and The Voice. 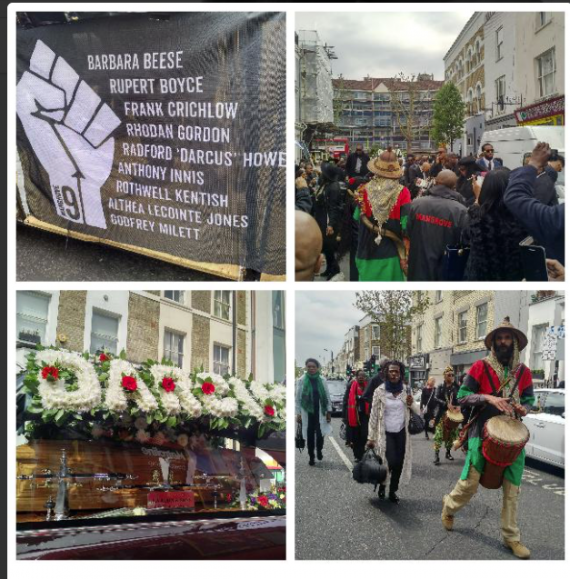 In 1982, Mr Howe began his broadcasting career on Channel 4’s television series Black on Black, was subsequently co-editor with Tariq Ali of Bandung File and later White Tribe, a look at modern-day Britain and its loss of “Englishness”. Howe continued to write in the New Statesman and fronted the Channel 4 current affairs programme Devil’s Advocate. He was a keynote speaker at the 2005 Belfast Film Festival’s “Film and Racism” seminar and presented his documentary Who You Callin’ a Nigger? at the festival. 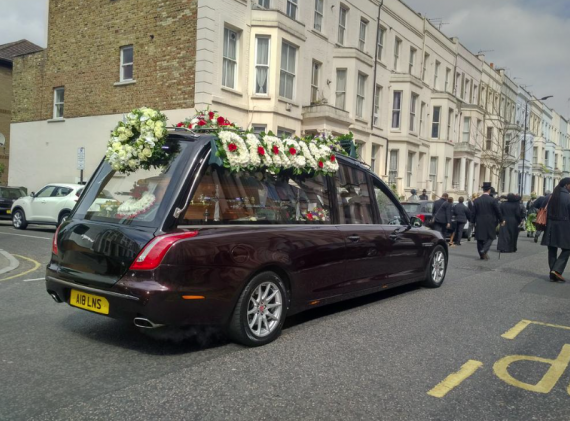 Darcus Howe appeared on the discussion programme Midweek (on BBC Radio 4), to promote the documentary on 19 October 2005 and, live on air, became involved in an angry debate with American comedian Joan Rivers. The dispute began when Howe suggested that Rivers was offended by the use of the term “black”; Rivers objected strongly to the suggestion that she was racist and accused Howe of having a “chip on his shoulder”.

He was interviewed by Fiona Armstrong for BBC News on 9 August 2011 at the time of the 2011 England riots.During the interview, Armstrong twice referred to him as “Marcus Dowe”, then asked: “You are not a stranger to riots yourself, I understand, are you? You have taken part in them yourself.” Howe denied this, saying: “I have never taken part in a single riot. I’ve been part of demonstrations that ended up in a conflict. Have some respect for an old West Indian Negro, and stop accusing me of being a rioter. Because you wanted for me to get abusive, you just sound idiotic—have some respect.” The BBC apologised for any offence the interview caused and said “it had not intended to show him any disrespect”.

More recently, asked about the unfolding situation in London, Howe discussed the death of Mark Duggan: “What I am not – what I’m concerned about more than anything else, there’s a young man called Mark Duggan. He has parents, he has brothers, he has sisters, and two yards away from where he lives, a police officer blew his head off.”

At the funeral his friend Sheila Graham from Jamaica talked about him as a young boy and his travels from the Caribbean to Southampton a few decades ago in 1961. 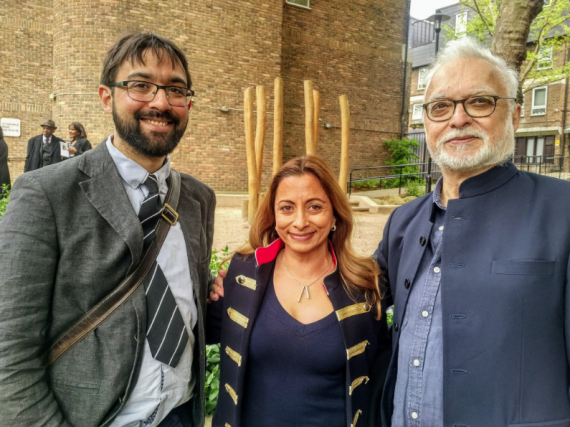 JASMINE, WITH MULTI-MEDIA LEGEND AND ONE OF THE FOUNDERS OF THE BRITISH BLACK PANTHER GROUP – FARRUKH DHONDY AND HIS SON.

Next, my uncle Farrukh Dhondy – who was also Darcus best friend and Black Panther UK founder, made a brilliant tribute speech about meeting Darcus many moons ago on a tube train from Hyde Park and their subsequent years of friendship, travelling to Delhi together and work escapades. 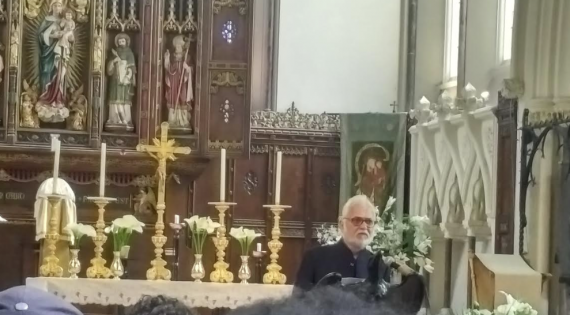 The funeral was interspersed with music from the Mangrove Steel Band and their pan playing. 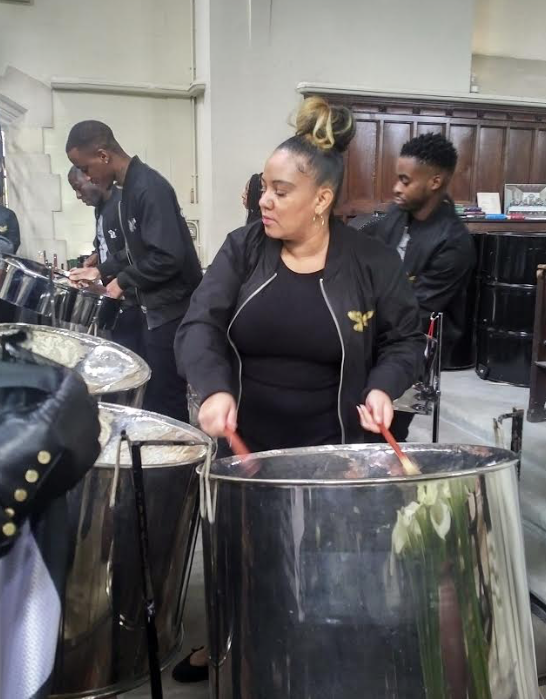 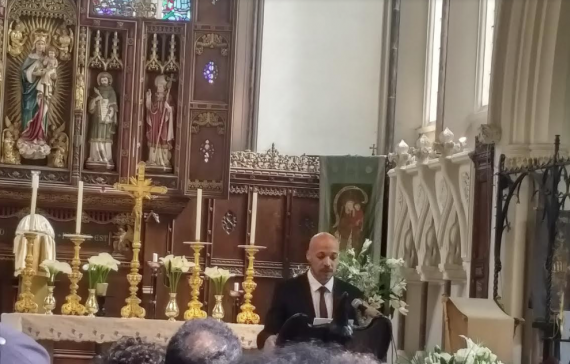 Co-ordinator of the Tottenham RIGHTS & Race Advocacy Officer at The Monitoring Group – Stafford Scott (who also happens to be music star Wretch32’s uncle),also made a beautifully powerful tribute about Darcus legacy… 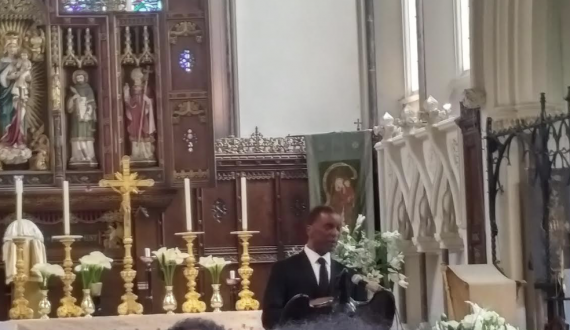 Stafford said ”Darcus used to call me by my full name on the phone ”Leila!-it’s Stafford Scott!”…..he called me initially and told me “you remind me of me when I was younger. He was the Mangrove 9. We were the TOTTENHAM 3. He always told me to ‘Say how it is. Stand up and be counted”. He was a unique pioneer. From Trinidad to the UK to USA he was known for his political forsights and insights. He was always someone that I would always turn to in moments of concern. He was a renegade. I was the rebel. The renegade would burn down places strategically. He would actually call and tell you he was coming to burn it down!. He stood decade after decade on the frontlines. He held everyone to account. Especially those who didn’t seem to have political rights. He was classless, the likes of whom we will never see again. The greatest accolade I can give my brother is that he wore some massive shoes. They are some big shoes to fill. If we are going to respect him let’s talk the truth to power. Where we can contribute to the community let’s do it. Cos without him the world is a harder place”.

Finally Darcus daughter Tamara made the emotional but commanding eulogy.
Tamara said ”I never expected to have to be here, saying these words, so soon. But Dad was unpredictable. He did his thing his own way. When he ready to go from somewhere you knew it…. I’ve been moved by the tributes…..he was a campaigner and a warrior but also a father, brother, son and more. We kids all know where we all came from, who we are,and that black was beautiful and come what may we were here to stay…. He as a legislator in every sense of the word. ….”Interference would be met with gunfire!!!” He would bellow….. 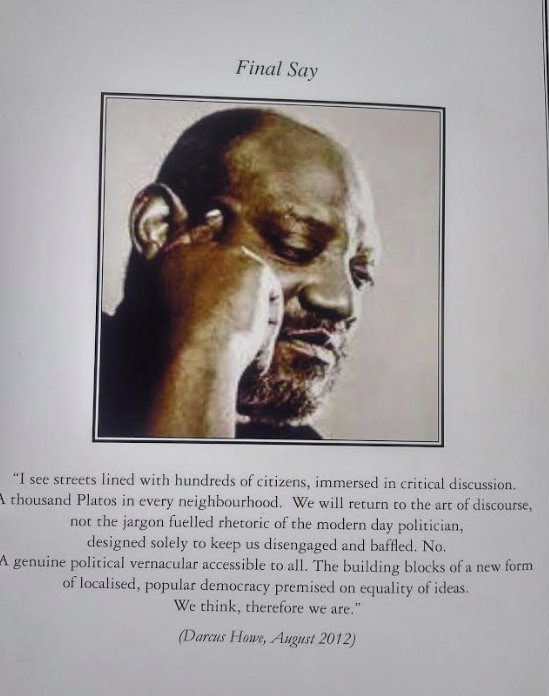 A great moment during the service was when Sheila added a surprise last minute addition by reading aloud...a note from Jeremy Corbyn to Darcus wife Leila Hassan… ‘‘Dear Leila. I am so sorry i am unable to be with you and your family today. Sorry to hear of the passing of Darcus. From rural Trinidad to Urban Britain…. Few people understood the exploitation of people from the Caribbean to Britain….thank you Darcus for all you have taught us. Jeremy Corbyn”.

Mr Howe was diagnosed with prostate cancer in April 2007 and subsequently campaigned for more men to get tested. He died aged 74 on 1 April 2017, at his home in Streatham, London, where he lived with his wife Leila Howe.

Thank you Mr Howe for many decades fighting for equality and justice. Thank you for being bold and brave and inspiring me to be so too.
The legacy that you have left will not be forgotten.
We appreciate you, will hold your name and stories high and we now have the baton to run forwards with.
Onwards and upwards. Love and laughter. Rest In Power Darcus Howe.